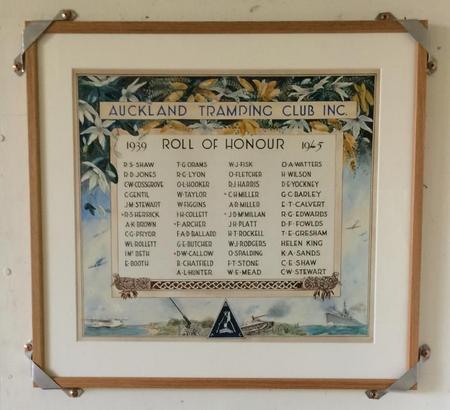 What is the Roll of Honour?

The Roll is a hand-painted artwork listing members of ATC who fought during World War 2.

It was originally hung in Memorial Hut, our former lodge on Mount Ruapehu, where it remained until the Club transferred the lodge to the Central Plateau Schools in 2018.

At that stage the roll was removed. Given it is a significant artwork requiring long term preservation, the Club gifted it to the Auckland Museum. In return, the Museum provided us with a high quality, slightly amended replica and electronic copies.

The photo is of the replica, now on display in ATC's Ngaro Te Kotare hut in the Waitakeres.

Origin of the Roll

Dorothy Mays, a club member, painted the Roll and gifted it to the club in April 1944. This was 13 months before VE Day - the end of the war in Europe.

Dorothy left the final two digits for the year the war ended blank, to be filled in later when hostilities ceased. The number ‘45’ was added later in a noticeably different lettering style.

5 men were killed in service:

On the replica the names of all five men killed are marked with a red star.

The mystery of the red stars

Whilst our replica marks all 5 of the fallen, the original has only three red stars, next to:

At the time Dorothy completed the Roll, only Doug Callow was known to have been killed. We don’t know whether Dorothy had painted a star next to Doug’s name at that time.

Equally, we don’t know when stars were added next to the other two names, John and Cyril. Or who painted them in.

And it remains a mystery why stars weren’t subsequently added next to the names of the other two men killed – Fred and Roy.

The 21st birthday issue of Wanderlust (1946) has the five men listed as having died during the war and their names are starred in that edition.

But there’s no explanation in any of our old Wanderlusts why Fred and Roy’s names lack stars.

Thus the replica differs from the original in that it shows a red star alongside the names of all five men who died.

Known information from old Wanderlust magazines about the five ATC members who gave their lives is as follows:

Particular thanks are due to Ian Roberts for his exemplary investigative efforts, trolling through various military records and decades of old Wanderlusts and Club archives, and comprehensively documenting the provenance and history of the Roll.