August was when proper winter hit Auckland but in New Zealand’s smallest national park the sun shone for the first week.

We did not set foot on all the 20 odd golden sand beaches - while many form part of the Coast Track, others were viewed from the main track or short diversions, or we made descents to visit them - like Appletree Bay for our first lunch or Sandfly Bay where we discovered that the steps end in the sea at high tide. Long stretches of lonely sand lapped by clear blue green water, and fringed by granite and bush predominate in the northern half of the park while the charm of the southern beaches lies in the assortment of small offshore islands. 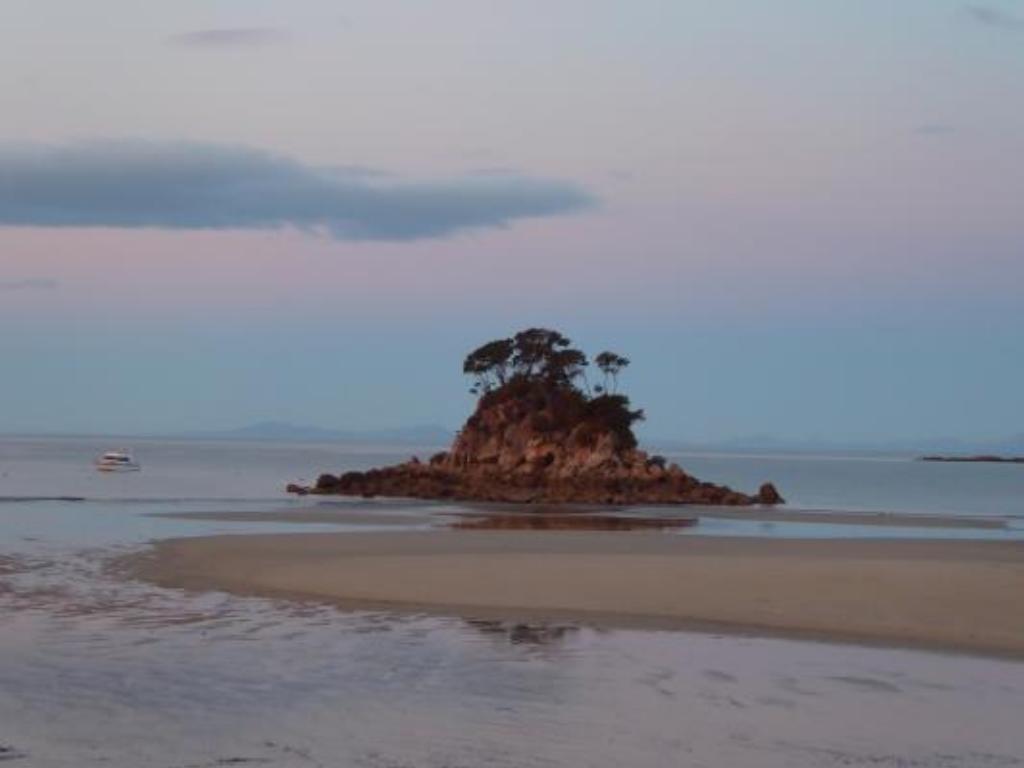 Tides expose and reclaim the beaches and estuaries twice a day transforming the landscape with wavy, watery patterns and providing "shortcuts" when the water is lowest. Most wanting to keep their boots dry braved the shells and winter water barefoot - only Keith was prescient enough to bring aqua hut shoes! 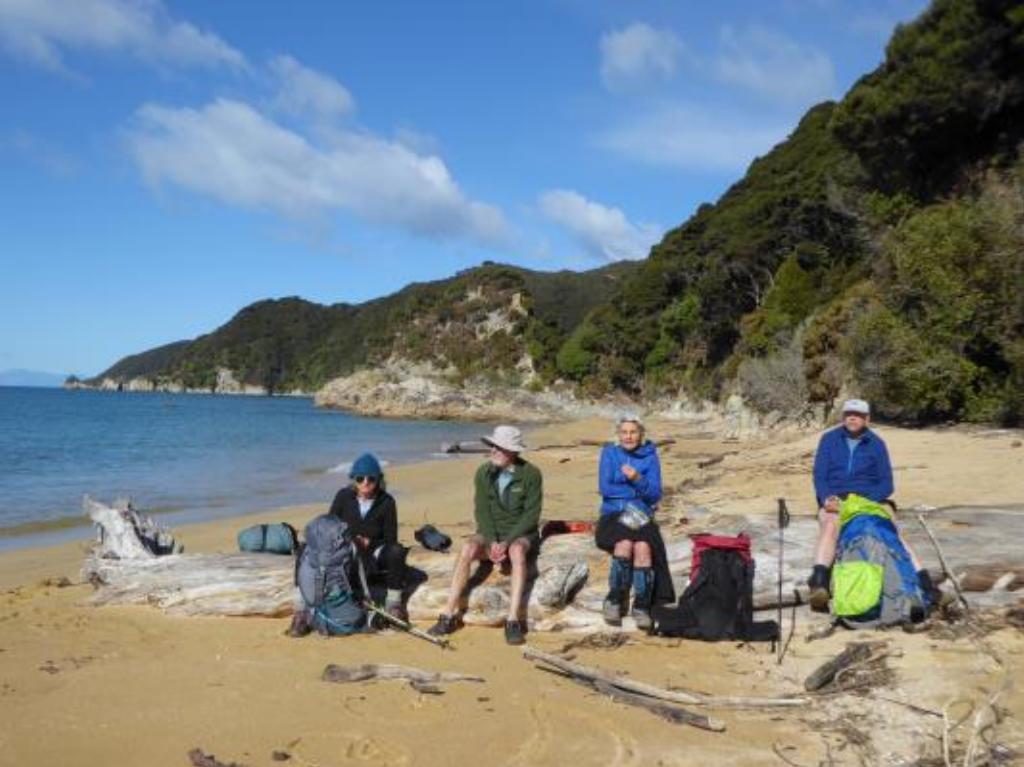 However crossing the kilometre wide Awaroa estuary at sunrise, with a dusting of snow visible in the hills above us, was a different experience to traversing Torrent Bay in the afternoon sun. As we stepped off the frosty deck of the hut, only four or five strands of river cut across the vast sand expanse tinged pink in the first dawn light - but "brutal" was the verdict of one of our number reaching the other side. 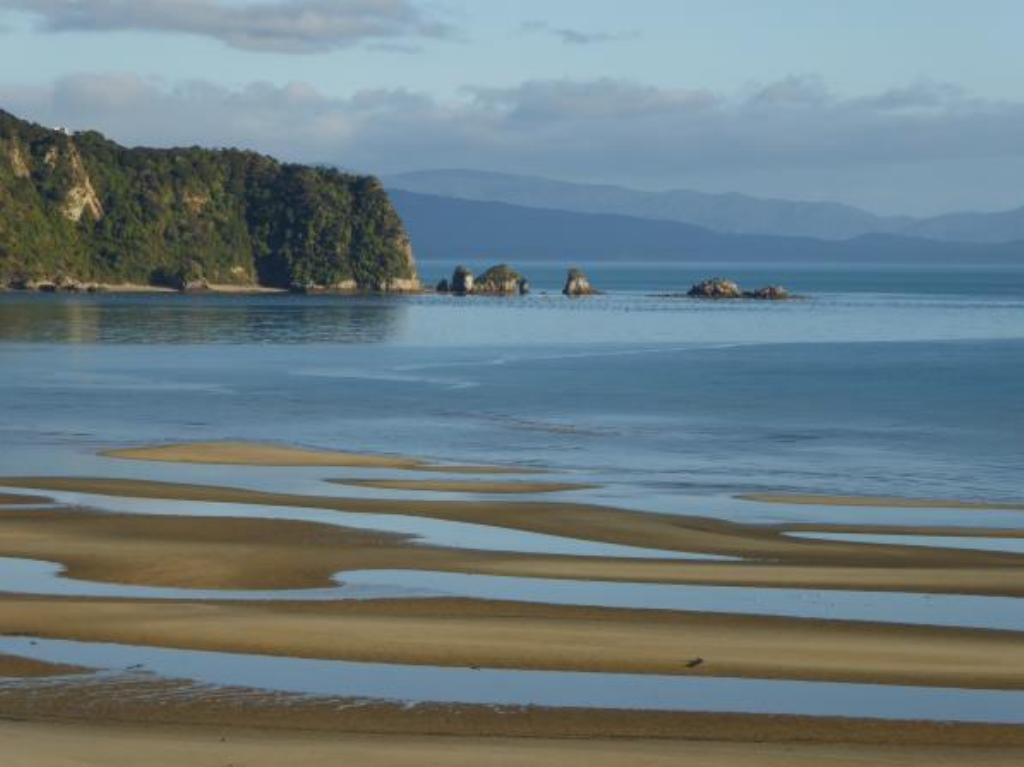 At Onetahuti Bay with no option but to wait for half tide, lunch was long and leisurely but we still stood like lemmings judging when to make a run for it while a party on the other side shed trousers to expedite their crossing.

Between Anatakapou Bay and Mutton Cove full tide waves played against a rock and the leader nobly sacrificed her dry shoes to check that the way beyond was clear while everybody else seemed to scamper around more successfully.

Between the bays the track climbs over saddles and above cliffs in the regenerating forest - having walked the track in 1996 I was heartened by how much the forest had developed with a good variety of trees and interesting undergrowth. Walking the ridgeline from Separation Point towards Whariwharangi Hut I particularly enjoyed the views of the sweep of the whole of bush clad valley down to the sea on one side and massive cliff faces on the other.

Birdlife was ever present thanks to Project Janszoon and DOC with traps for mammals and wasps regularly spaced along the track. Patches of bush were alive with bellbirds, fantails kereru, tomtits, warblers and robins, and on the beaches were shags, ducks and oystercatchers. No pesky sandflies and wasps thanks to winter temperatures. 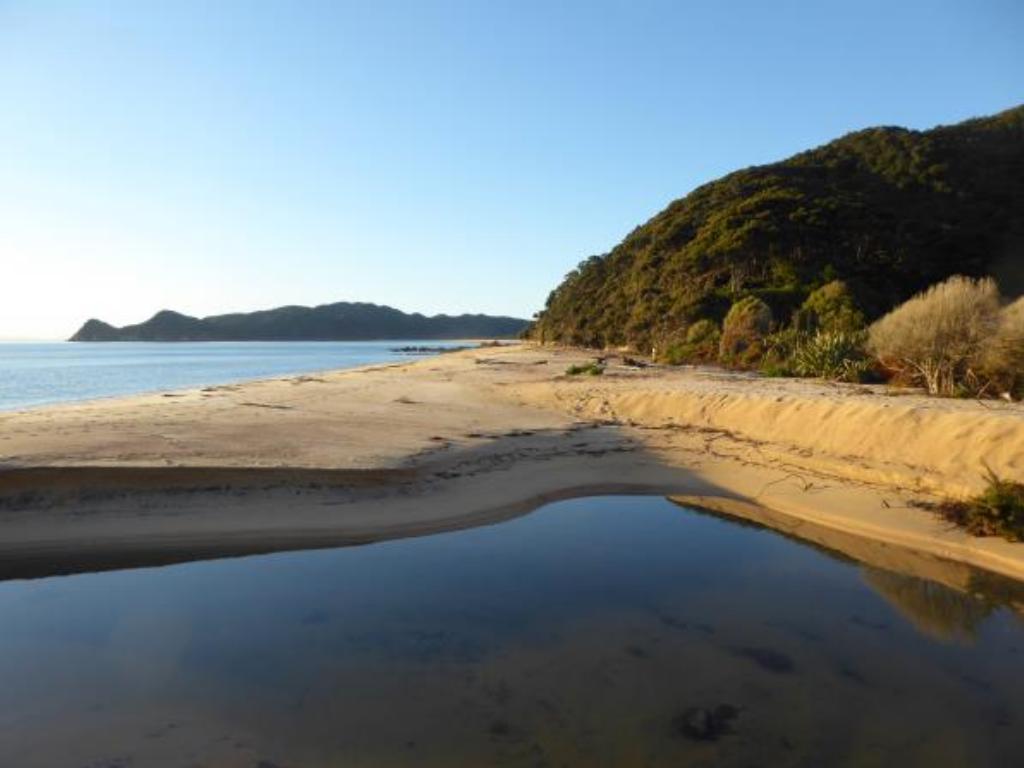 We were entertained by the fake gannets and recorded calls at Separation Point in the attempt to establish a gannet colony but the sleepy seals on the rocks far below showed little interest.

Weka were at all huts and campsites and as cheeky as ever - what was more funny - the weka running off with a ziplock bag of coffee or the look on Margaret’s face?

It is great to do the Inland Abel Tasman Track just after trekking the Coast Track as you can recognise the bays from your lofty position starting with the expanse of Wainui Bay and Inlet that dominates the first day. 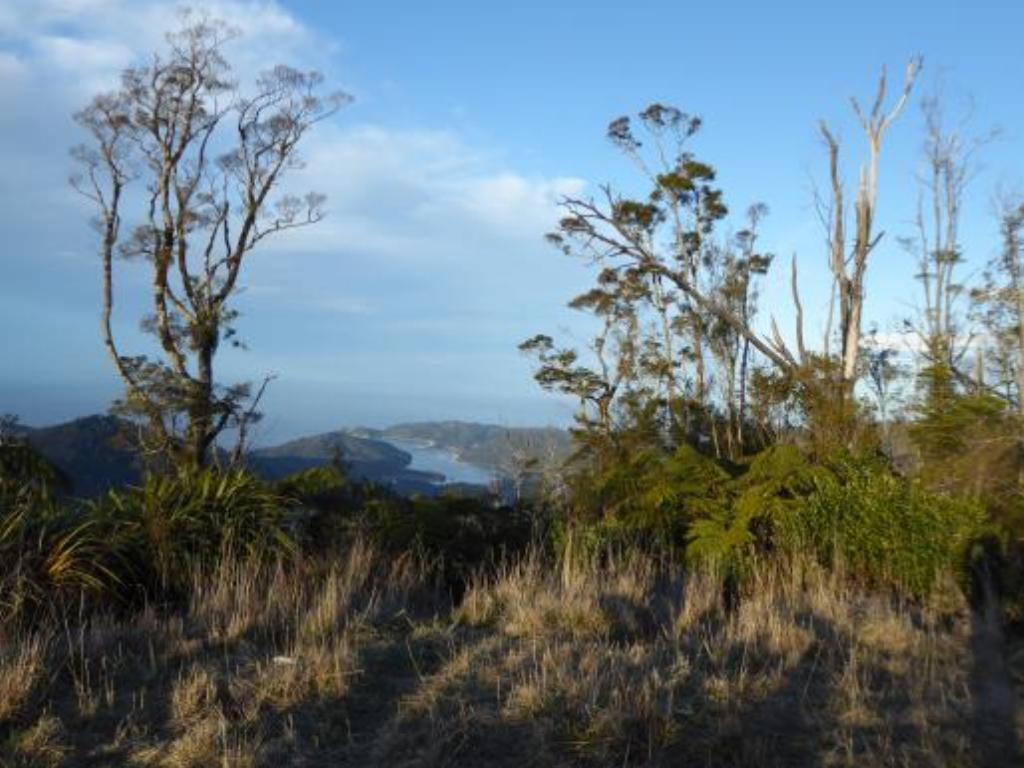 At Awapoto Hut there is a fine view of Awaroa estuary, and Castle Rocks Hut overlooks Marahau and Tasman Bay. The only side track viewpoint that offered a distant view worthy of the effort was Porter Rock from which seemingly all of Tasman Bay was visible although vegetation is encroaching the panorama.

As first the Inland track comprised only scruffy vegetation followed by farmland but that was an aberration as much of the track is in mature native forest with tall beech and rimu.

On the second day as we ascended to over 1000 metres, the mountain versions of trees predominated - cabbage tree, kaikawaka, horopito, toatoa and delightful neinei; at Moa Park snow remnants lay in a colourful patch of subalpine shrub and tussock. 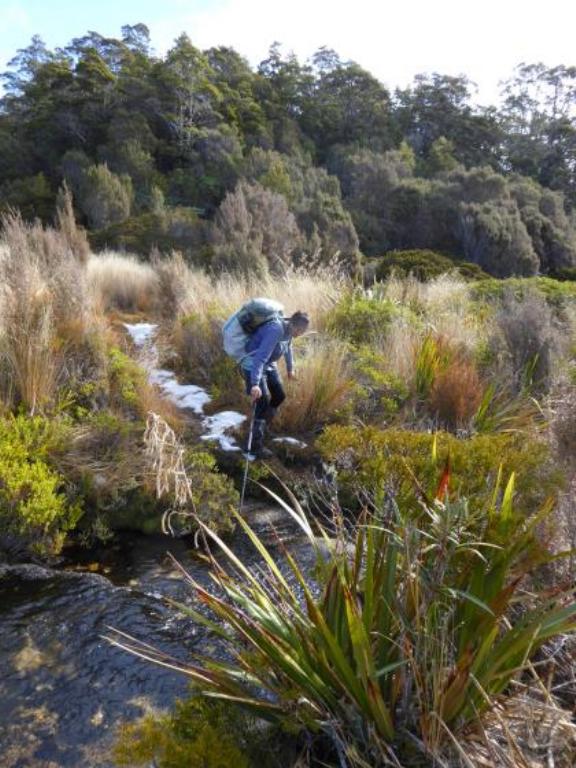 As we descended on our last day we returned to regeneration and some prominent Australian weeds.

The bird life was also in good health on the Inland Track and we were visited by a kea at Castle Rock Hut. We were surprised to be also visited by a possum that night having seen one earlier that day no doubt dispatched by the recent 1080 drop. Lots more weka, bellbirds and fantails.

On both tracks there were frosts every night except the night we camped at Torrent Bay when it rained briefly overnight. And yes it did rain once while we were walking for all of half an hour before the sun returned.

Perfect temperatures for tramping but I was very grateful for the team of firelighters, wood choppers and wood gatherers who quickly had stoves ablaze as afternoon temperatures plummeted.

We only shared Whariwharangi Hut with other trampers - all of 3 - and once beyond Bark Bay saw few others on the track.

We had the best part of a day in Pohara between the two Abel Tasman tracks at the very helpful Top 10 Holiday Park which greeted us with free apples. Cafe time, beach wandering time, relax time and a ladies cycle trip to Takaka. In Nelson en route to Picton we dined at the East St Cafe catching up with Karen Manning and Diane Dowle. 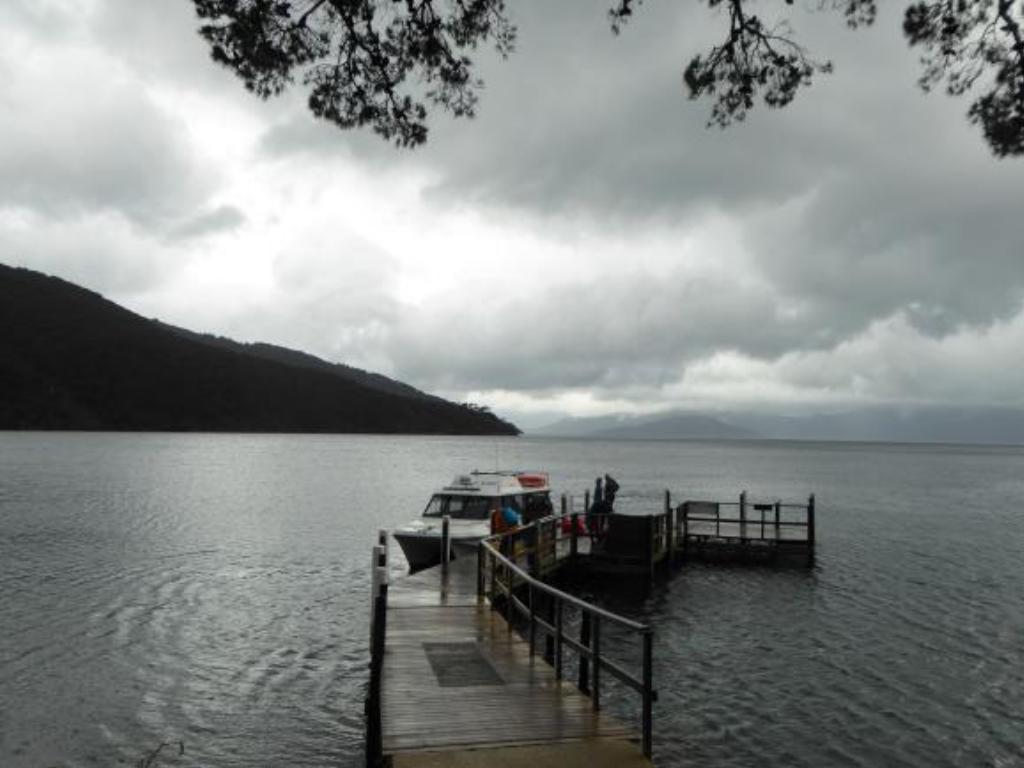 Just as Aucklanders started to risk hanging out laundry our luck changed and steady rain fell in Picton as we boarded our boat for Ship Cove. Conditions worsened as we sailed towards less sheltered seas and we were down to negotiating each swell at a snail’s pace when the skipper decided that he would deposit us at Resolution Bay where our quaint cabin in the daffodils awaited us (and more free apples).

Most of us walked a loop route to the view of Ship Cove and Motuara Island, enjoying the forest but returning sodden. However despite the forecast it was the last time we got wet as for the next two days we left early enough to ensure arrival at our destination before solid mid afternoon rain set in.

Our journey to Camp Bay began with a saddle over into Endeavour Inlet and then the track undulated relatively near the water’s edge from which we appreciated the peaceful, deep-blue sea tones and the regenerating forest dotted with homes and baches.

A relaxed coffee stop at Furneaux Lodge saved us from a sharp shower and, as for Abel Tasman, a picnic table was fortuitously available at lunch time. Oh the delights of Punga Cove - our own rooms with proper beds, freebie wine, a spa pool (and no other guests to be shocked by our unorthodox swimming attire) and raising a glass of port to honour Graeme’s birthday.

Sadly we saw little the next day determinedly marching for most of our 25km to Portage, high above the sounds in a cloud. We were most happy to arrive at our Treetops Backpackers home-away-from-home. 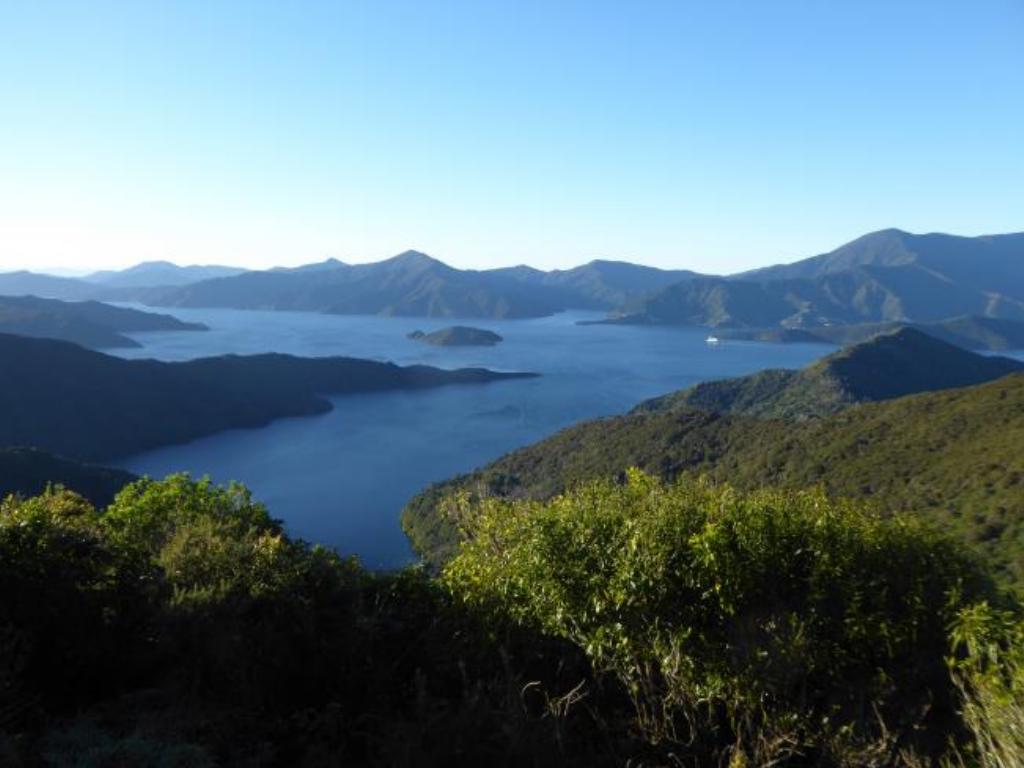 Our final day was a regaining of the 400+ metres elevation of yesterday but with blue skies and wondrous views of Queen Charlotte, Kenepuru and other smaller sounds - and when we finally descended to the final stretch to Anakiwa, there was glorious mature beech forest.

In comparison again with 1996, I was amazed by the forest regeneration interspersed with patches of more mature forest in which there are sadly just a few unlogged large rimu. Huge numbers of pine trees are being poisoned and pest control work has brought the birds back particularly to the northern section. Hardy weka are everywhere.

As stalwart trampers we adapted well to having our large packs carried by Cougar Line - it was not significantly cheaper and less complicated to partake in this Queen Charlotte walking tradition.

Track times – from door to door - including waiting for tide