The December 2019 newsletter is attached to this page

A recent update from the Kauri Rescue project and other kauri related news ... 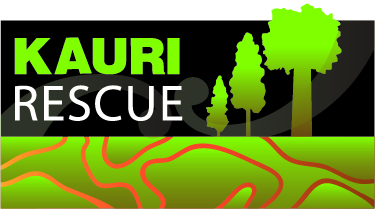 Funding for 2019-20 Confirmed
The Kauri Rescue project is being funded by Auckland Council from 1 March 2019 for a year to work with landowners in the Auckland Region on treating and monitoring their kauri trees infected by Phytophthora agathidicida (kauri dieback). For the previous two years the project was funded by the Biological Heritage National Science Challenge. The team is excited to extend our positive working relationship with Auckland Council, who have provided inspection and detection services for the project from the outset, into a full blown partnership. Auckland ratepayers with kauri are benefiting greatly from this arrangement.

New Participants join the project
During the first 2 years over 500 people contacted the project about kauri dieback issues. Of these 250 wanted an inspection of their trees and 50 were recruited as project participants to begin treatment, treating over 800 trees. Since January 2019 the project has handled 112 enquiries, enrolled 26 new participants and treated over 450 more trees on private land. New participants John and Sarah Peacock (below) have been making great progress on their large bush block at Muriwai, west Auckland.

mātauranga Māori-led Research brings hope
The Kauri Rescue team featured at the recent Phytophthora Symposium in Auckland where team leader Dr Ian Horner made a presentation and the team featured in a poster.

In a  paper presented at the Symposium and published last week. New research by Dr Monica Gerth from Victoria University of Wellington suggests kānuka may actually help halt kauri dieback. Her team found that compounds extracted from kānuka have the ability to halt kauri dieback by paralysing the zoospores that infect kauri roots. "If the spores can't move through the soil, they can't infect kauri, which could spell hope for our forests," the authors said.

Extracts of the plants' leaves and roots were tested for their ability to inhibit the disease pathogen and showed the kānuka leaf was the most effective at inhibiting germination and completely eliminating the germination of the pathogen zoospores.  Overall, the results from the study emphasise the value of using mātauranga Māori in the response to kauri dieback, the authors said.