The weather outlook was bleak. My team was already labelling me the ‘wet Robin’. Will this be the third year I have led a team into the ‘wet zone’? 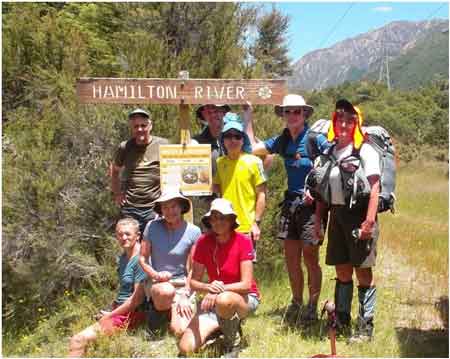 Rob (leader), Antal, Lynda, Carol, Brent, Margaret and Hideo Once again, the Xmas bus schedule to the South Island worked like clockwork. After travelling down from Auckland, the bus met the cushy travellers at Nelson Airport and headed for St Arnaud to drop off Lee's party and then to the Red Hills track start to drop off Pieter’s crew.

From there it was down the Hydro Rd to the Hamilton River arriving at around 2.00pm, 27 December. Today was a leisurely stroll up the Hamilton for a couple of hours to find the last camp spot before the valley closed in. It was fine, hot and overcast. Bleak weather was on the horizon.

The next morning we set of to conquer the first of our six passes, Begley Saddle. Arriving at around 11.00am we decided to drop into the Begley for lunch. This is untracked land and there were a number of guts to negotiate to the head of the Begley.

It’s only day two and the leader ‘loses’ his first team member. Dennis decided to peel off early to gain the river. We stopped for lunch to wait for the ‘brown cow’. Some of us thought he may have passed us and headed for the hut. After about half-an-hour’s wait, Dennis emerged from the river - panic over. Begley Hut, a traditional forestry abode, was reached at about 3.00pm. Another easy day.

We left Begley Hut around 7.40am and headed down-river to the confluence of the Rainbow and Paske Rivers, arriving an hour later. It was there that the writer discovered he had left his expensive sunglasses hanging on a bunk hook at Begley Hut. Too far to go back, so maybe a note in the Paske Hut book might trigger their return. We arrived at Paske Hut around noon after another ‘strenuous’ day. The troops were now teasing me that this should have been advertised as the easy trip. I was lulling them into a false sense of security.

Late in the afternoon the skies opened up (29 December) and it wasn’t too long before Paske Hut was sitting on a swamp. The weather looked bleak for the next 48 hours. As this was the last hut for a couple of days and we had the Paske Saddle to cross, the decision was made to have a pit day. Well, actually two! 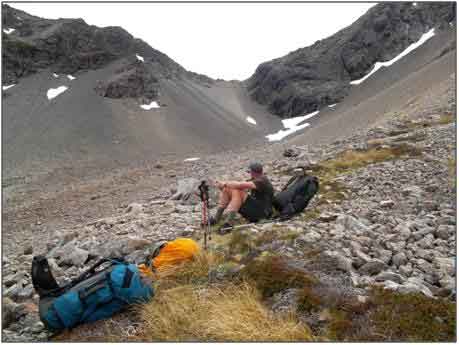 Dennis contemplates the climb to Clarence Pass New Year’s Day greeted us with sun and blue sky. Good weather to put in an eleven-and-a-half hour day! We left Paske Hut at 7.20am, arriving at the saddle in two hours. We decided to sidle east to gain Clarence Pass just below Belvedere Peak. In hindsight, we should not have tried to cheat and drop into the Clarence River. We got bluffed about two-thirds of the way along. Perseverance paid off and, after a short lunch stop at the base, we arrived at the pass at 2.00pm.

The long, slow trip down the East Sabine was hard work. Where were the easy-to-traverse animal trails promised in Brabyn’s book? It was difficult tussock, bush and river bashing for five hours. Camp sites were hard to find and despite trying to motivate Margaret to go on, she decided to camp at a site that took only a couple of tents. She would meet us down-river in the morning. Ten minutes later we fluked a great site and it was a much-relieved group that threw their packs off at 7.00pm!

On the lower part of the East Sabine we picked up some old permalot markers. Finally, we intersected with the Travers/West Sabine Track and headed up the West Sabine. On reaching the intersecting track to the West Sabine Hut we saw the devastation of the pre-Christmas rains - the bridge was destroyed, but a convenient fallen log provided a balancing-act crossing for some. Others linked up for a river crossing. We arrived at the palatial Blue Lake Hut after an eight-hour tramp. 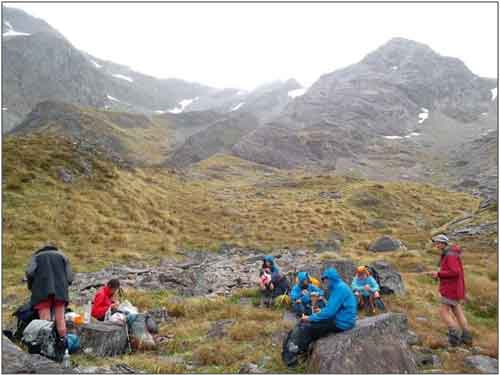 Lunch on the lower east side of Waiau Pass The next day saw the weather pack in again as we set off in a white-out for Waiau Pass. After three-and-a-half hours we arrived at the pass where we gazed across the clouded valley to a hidden Lake Thompson some four hours away.

The descent from Waiau Pass was very steep but the ascent to Lake Thompson was easy going up a snow-filled gut on the western side. We arrived at the lake in drizzling rain. Thanks to a Jetboil stove and a good vestibule in the Hexamid tarp, Rob cooked and ate dinner in his sleeping bag!

The next morning we woke to a glorious day. After conquering Thompson Pass we decided to take the high route around the headwaters of the D’Urville River before dropping down and following the river to the start of the D’Urville Track. It was another tough day negotiating the upper reaches of the D’Urville. 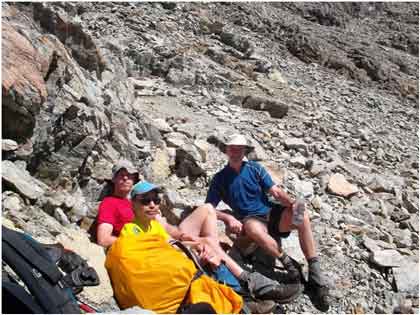 Rob, Hideo and Brent on Moss Pass We arrived at the Moss Pass bridge after seven hours’ tramping. Rob and Dennis camped at the bridge while the rest of the party, wanting hut comfort, went on to George Lyons Hut for night. They returned to the bridge the next morning to start the slog to Moss Pass. Margaret and Antal, having been over the pass before, headed down the D’Urville.

Another great weather day and Moss Pass was reached after two-and-a-half hours. One and-a-half hours later we were at Blue Lake Hut again. Moss was not as scary as legend has it, but be warned, very steep in the early stages of the west-east crossing. We made good time and a great but strenuous day’s tramp was enjoyed by all, especially Carol, now officially the ‘Moss Pass Queen’.

From Blue Lake, Dennis and Rob embarked on a ‘speed fest’, arriving at Sabine Hut in six hours! The next day the flying duo were off again, leaving at 6.15am via Speargrass, and getting to the Robert Ridge carpark in three hours fifteen minutes. 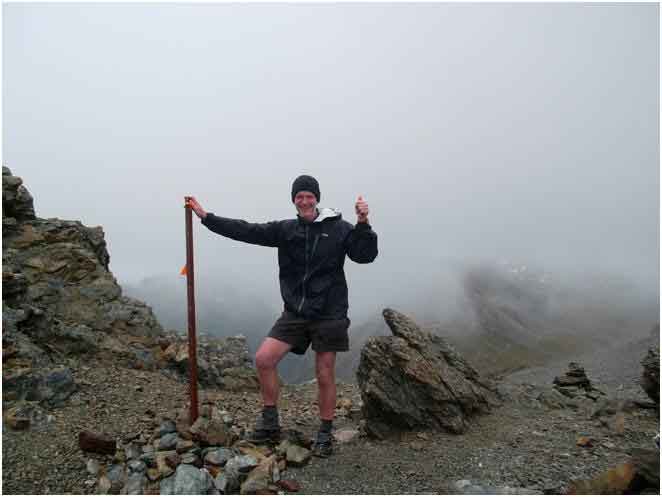