This new hut in the southern Kaimai Mamaku Conservation Park is now open for everyone to use. 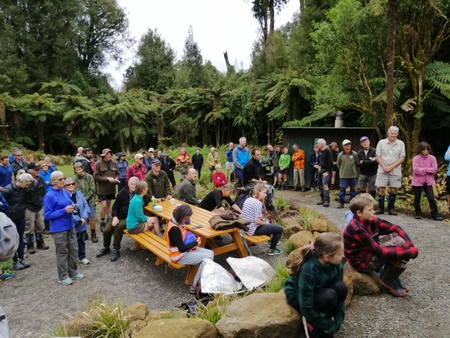 In mid October there was a week of nervously digesting the weather forecasts for the big day, where trampers and helicopter passengers were scheduled to arrive at the hut for an opening celebration. For most of the week it did not look promising, including heavy rain the day before, deterring a few people from arriving a day earlier.

But on the day the weather gods and our very experienced helicopter pilot deemed it suitable for flying. In the event around 35 people flew in by helicopter and 45 walked in, including an ATC work party that left Auckland at 6am that morning to ensure they would arrive in time (walking in, of course!). What an embarrassing contrast between the 3 minute helicopter ride from near the end of Whakamarama Rd on the eastern side of the Kaimais and the 4 hours it took people walking in from that point!

Other parties walking in for the day were from the Whangamata Tramping Club, the Katikati Tramping Club, the Waikato Tramping Club, the Auckland Baptist Tramping Club, Whakamarama Community Inc, and BOP Deerstalkers. Peter Wilson, representing both FMC and the Backcountry Trust, took on a horrendous travel schedule to be there, which was much appreciated, as he has spearheaded a major amount of support from those organisations all the way through the Kaimai project.

Although no one from DOC was able to attend, we were fortunate to have 3 members of the Bay Of Plenty Conservation Board present. It is the role of conservation boards to advise DOC on areas of public interest, and they were all thrilled to see this first major improvement in the Kaimai backcountry facilities in several decades.

A big supporter of the project has also been the local iwi – Ngati Hinerangi – of Okauia, near Matamata. Some of their members were present on this day.

The ribbon across the entrance to the hut was cut by Godfrey Mackersey, a local farmer who campaigned strongly to protect our remaining native forests in the 1970’s and 1980’s, including the Whirinaki and the Kaimais – at one stage there was a proposal to replant the whole Kaimais with pine trees. 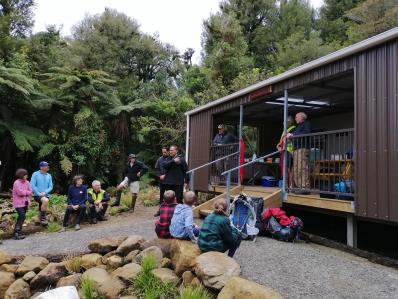 Peter Wilson emphasised how volunteers who are enthusiastic about the backcountry are increasingly taking back the maintenance of huts and tracks throughout the country from DOC, which has shown itself not up to the task of maintaining our backcountry heritage.

A reporter from the Waikato Times / Stuff was busy throughout the day interviewing people and taking photos, managing to capture one of Roger Montgomerie carrying a well deserved pack of beer from the helicopter! Go to https://www.stuff.co.nz/ and search for “Beers and cheers”.

Of the stalwart ATC work party, Jane Marjoribanks had walked in along a very wet Ngamarama Track the day before. Murray Gifford, John Parsons, Justin Gleeson and Peter Keegan left very early on Saturday to arrive in time for the opening. 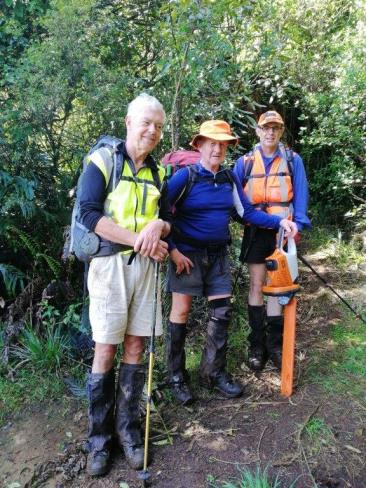 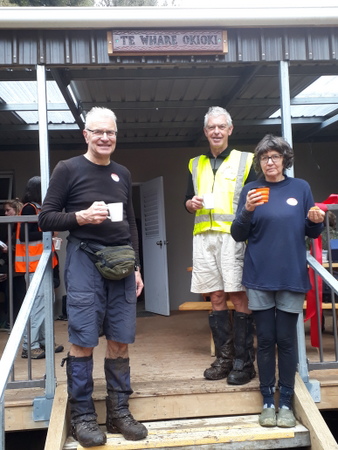 They also had time over the weekend to do some good track clearing on the North South Track from the hut to the Te Tuhi / Ngamarama junction, also working on clearance of some of the jumbled vegetation behind the hut, left following site preparation work by DOC’s Warren Geraghty in the DOC digger. There is always more track work to do – thanks everyone! They of course had the benefit of staying in the hut, so at least on this Kaimai work trip they did not need to carry their tents in.

The hut has been constructed to exceed the DOC serviced hut standards. It features 12 bunks, a woodburner, a very large covered deck, solar lighting, and 3 picnic tables for use on the deck or in the old Ngamuwahine Clearing in front of the hut.

There is a purpose built helipad behind the hut, and for hunters there is a large meat safe and dog kennels.

There is ample camping space around the hut, and more to come on stream as the site clean-up progresses.

The hut can be booked online on the DOC website or by phoning DOC Tauranga.

Te Whare Okioki is owned by the Kaimai Ridgeway Trust and maintained to DOC standards by the NZ Deerstalkers BOP branch on behalf of KRT. Hut fees received by KRT via the DOC booking system are used for hut maintenance.

ATC contributed $45,000 to the hut construction costs from the Roger Taylor bequest. Money well spent? Based on the universal feedback from the 80 on the opening celebration day, definitely …. so go check it out for yourself! 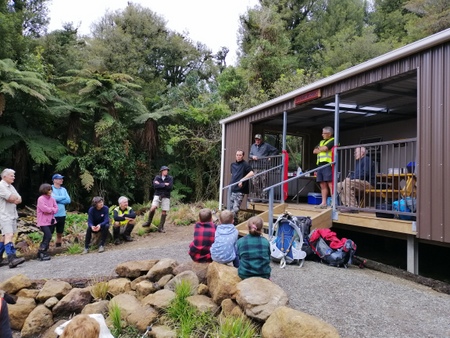