The second week of the Medium 2019-20 Christmas trip had its primary focus of crossing the Southern Alps near Arthurs Pass from east to west via Taruahuna Pass and then travelling down the Otehake Valley to the renowned hot spring, Lake Kaurapataka and the Taramakau Valley. Accounts of difficult travel down the Otehake from a few years ago fortunately improved after volunteers from the Permolat group re-established the track down the valley, as well as doing a major renovation on the Otehake Hut – so a good chance for embarking on a trip that the club may not have done for a very long time ?

Because of the transport arrangements, 5 members of the party (Catherine, Joanne, Bruce, Michelle, Margaret) were dropped off just over the Mt White bridge to spend the next two nights at Hawdon Hut and Tarn Col (experiencing a lovely still evening in a sheltered alpine spot).

Another 3 people (Christine, Kathy, Vicky) opted for the Hawdon – Edwards circuit, with the 8 people travelling together as far as the top of Taruahuna Pass before heading their separate ways. 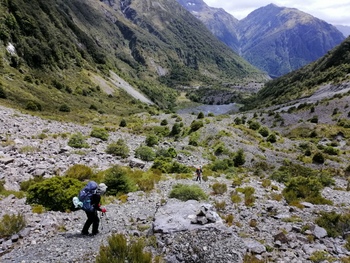 Meanwhile, Hazel, Sally and Tony started from Greyneys to tramp up the Edwards valley spending a night at the Edwards Hut, then over Taruahuna Pass and down to Otehake Hut a day earlier than the main group.

The Edwards Valley, after a few abrupt ups and downs, was a very pleasant affair, although with a cool morning breeze as we left the hut – with a few cooling river crossings along the way before the river dried up completely as we neared the final climb up to the pass. Big boulders were a feature of the ascent – a present from Falling Mountain following a major earthquake in 1929. Once at the pass, the route down into the western Otehake Valley is marked with cairns and poles – it is a rough route, especially when it climbs above the Otehake Gorge, but for our group of 3 it was a fine day with time to appreciate views down the valley, the occasional forest patches above the gorge, and enjoy the company of friendly robins. 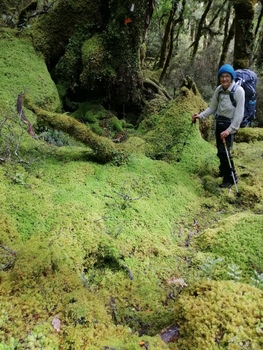 A picturesque waterfall originating from Lake Sally – that must be a pretty spot, but it is a steep 700m+ scramble up there, so keeping that for another trip …. perhaps.

After crossing the Mt Russell Stream and continuing in the riverbed for another 500m the track then climbs up into a rich kakapo-esque green rain forest, on a well marked track through to Otehake Hut, set on the edge of a clearing above the river

The hut is a real gem – an original NZFS 6 bunk hut that has had a large enclosed lobby added, so plenty of space inside the hut for people and dry gear, with wet gear able to be relegated to the lobby. A solar powered light, but given we were on South island summer hours, we had no need for it – later in the year it must be a real bonus. The hut book dates back to 1991 reflecting low historical use in a difficult area, with our entry being on the last page – so a real privilege for ATC to be part of the hut’s long history. Many accounts of slow travel / unexpected nights out in the Otehake Valley before the Permolat volunteers did a major amount of track and hut work in 2017-2018. 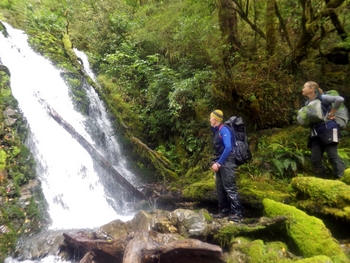 he next day for our party of 3 was a stay at home day – a chance for a bit of track tidy up work in the morning before drizzly rain appeared earlier than forecast. The rest of the group joined us during the afternoon, a bit damp, but otherwise pleased to be in a dry hut … where we all stayed the following day because of the forecast intermittent rain most of the day.

But all was fine the following day, with the group split into two to travel on down the Otehake valley to the hot spring. Absolutely gorgeous rich green forest, a good number of tree falls and side stream crossings (water levels were low so all OK), so fairly slow travel, even though the track was well marked until in petered out in the riverbed a few hundred meters upstream from the spring. 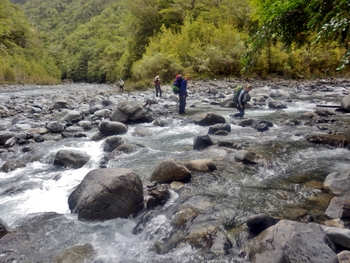 The spring is in a mostly dry section of the riverbed separated from the main branch by a large island on which there is a superb campsite under the trees. The aroma of sulphur is present even in the main branch at that point. The spring was a little cool when we arrived, but once an incoming cool feed was blocked off it started to warm up quite quickly. It features a pool that a few people can sit in at a time well immersed in pleasantly warm water. 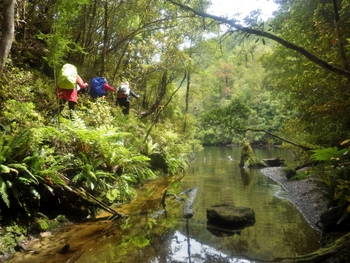 The next day we had only a short distance to cover, so a late morning departure had us in the riverbed for over 1km before the marked track took us up and over a low saddle to the shores of Lake Kaurapataka, where the promised large open camping area was found half way along the southern side of the lake. A bird spotters paradise including a flock of yellow-crowned kakariki and a few inquisitive wekas on hand to grab anything they could. Fortunately everyone was too careful, so the wekas were unsuccessful this time !

An interesting feature of the area was that almost all the side streams feeding the placid lake were dry, so for once there was no sound of running water overnight or while walking through the bush for many kms. 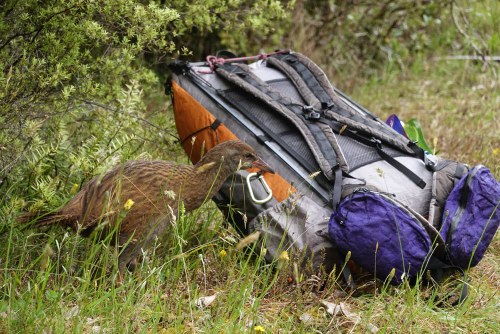 Our final day was an easy walk through tall red beech forest to reach Pfeiffer Creek (running water at last), and then the wide open Taramakau Valley. As a result of two weeks and more of falling river levels, the Otira River was a breeze to cross, and a short walk to the Aickens carpark to Robin and the waiting van provided a pleasant end to a very interesting and varied tramp.

Thanks to a number of the group for their turns at leading, to Hazel, Simon and Robin for transporting us, and to the Permolat Group for their wonderful work in the Otehake Valley. Photos by Michelle, Margaret and Tony. 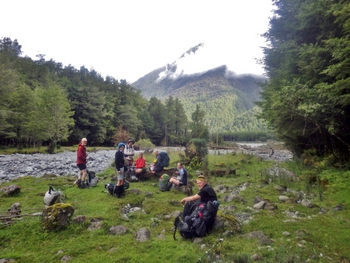 Thanks to Andrew for organising some great weather with Hughie and sending us through daily updates via our InReach satellite text messenger. What a lot of information can be included in a short message. Once we were briefed to understand that 3 readings per day were at 6am, midday and 6pm, for wind and rain (mm), the following makes so much sense … and very agreeable when tramping west of the Main Divide !