Mon: Nov 17: A very wet morning with whiteout conditions over the Brynderwyns.

At Whangarei 21 of us assembled at Top 10 Holiday Park and settled in to various accomodations. The weather cleared beautifully for the rest of the week and we had a very enjoyable time.

We were straight into it with a climb up Parihaka 241m, the Drummond Track starting from behind the camp and across the Hatea River. Parihaka is an eroded volcanic cone with terrific views and, along the 3 km ridge, the remnants of a Maori settlement with 13 pa sites and 300 kumara pits still quite visible. 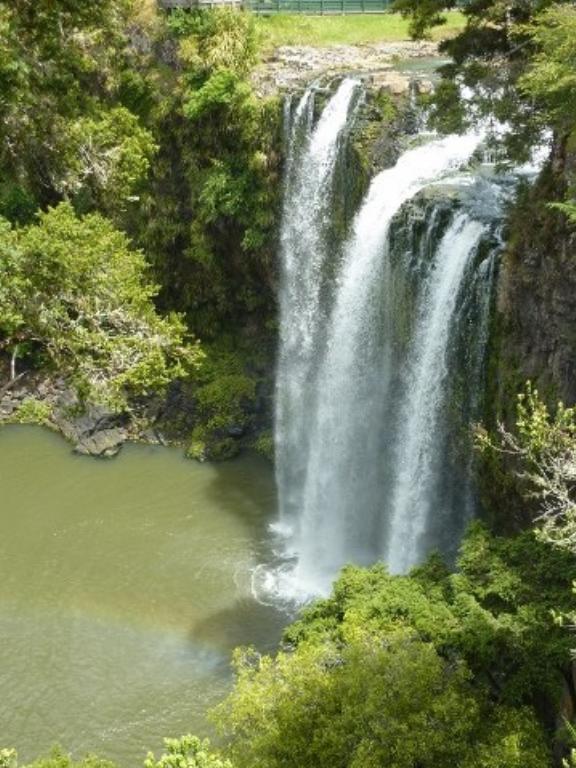 The Hatea walkway along the beautiful river gave us wonderful scenes, then to A.H.Reed (the historian) walk, a canopy walk, and then finally the well-filled Whangarei Falls for lunch. Viewing tree ferns and Nikau from above, gave those attractive trees new perspective. The Sands Road loop took us to the smaller Paranui Falls in the Waikoramiko Stream, then the reverse of the A.H.Reed walk home completed a most enjoyable day. By Chris

Group 1: Through trip via Mt. Lion to Ocean beach.

From Urquharts Bay we started climbing steeply, up many well-formed steps, about 400m to the summit of Mt. Lion. From here the ridge undulated until we dropped to the saddle to Peach Cove; no-one could face another 800 steps, so we carried on, climbing steeply again to another peak of 475m- heard a couple of Kaka and saw Kereru along here. After a superb rocky viewpoint, it was a long downhill towards Ocean Beach, going past an old W.W.11 radar station. This is a great 4hr tramp, but tougher than some of us expected. We were, Keith, Jean, Liz, Phil, Howard, June and Barbara. By Liz

Group 2. We took the direct route to Smugglers Bay - white sandy beach dotted with large rounded pebbles. We climbed up to Busby Head, a Maori pa site with great views then continued on around a loop track back towards Urquharts, to a WWll. gun emplacement, and a Observation Post building, complete with a scenic "spotting" mural and compass bearings painted above the slit window.

After lunch at Urquharts under sunny skies we drove in Big Blue over to Ocean Beach to collect Group 1. Some of us headed uphill toward the Radar station and enjoyed the marvellous sea views. A lovely day. By Sarah.

Our drivers Bob & Keith each did a bit of this tramp and made it all possible by moving Big Blue to avoid a road bash.

Group 1: All of us, with the exception of Keith who moved the bus--from Whananaki Estuary we crossed and recrossed the noted Whananaki footbridge, then onto a grassy track which passed behind private beaches and over a stile to join up with a well-graded pohutukawa-lined farm track/driveway, with excellent views of the coast and Poor Knights Islands. Reaching McAuslin Rd, completed this section.

After lunch at Sandy Bay, Bob delivered 9 of us to our track start on Clements Rd.

The track climbed through private pasture land, boring pine forest and regenerating bush, before entering a beautiful DOC native bush reserve ('wax lyrical' said Pauline) before passing Tane Moana, 11 metres in circumference and the largest remaining protected kauri on the east coast. A high point later on gave us great views up and down the valley. At a former skid site the track passed through replanted pine, crossed a pasture, a stile, and bush to emerge at our destination/bus at Waiotoi Road.

The exit/entrance track notice was difficult to spot from a vehicle, and Big Blue had gone sailing past along the ever narrowing road. We were soon re united.

An enjoyable day in sunny weather. By Howard

Meanwhile Group 2 took a short drive to Reserve Car Park and an easy walk to the lookout and Whale Bay for spectacular views of Matapouri Bay and out to sea.

Then we drove to and up Clements Rd to pick up the through trampers of Group 1. A scenic drive back to camp via Tutukawa and Ngunguru. Another grand day for all. By Anne Sanders

Manaia is always impressive when viewed from the Brynderwyns and even more so when its ancient volcanic spires and its huge bulk are towering 420m right above the recently developed parking and picnic area. As we headed up the well maintained track which circles Manaia and goes up steeply in parts, there were thoughts that some would go part way and then turn back, but in the end the distraction of viewing interesting orchids etc. on the way drew most of the group to the top viewing platform.

From here some gingerly looked over the rocky rampart into a cold stiff wind which brought with it the droning industrial sounds of the Marsden Point oil refinery but also fantastic clear views in all directions and directly down to the small blue dot of Big Blue and our later destination across the way of Mt Aubrey.

After the morning's climb some decided to "rest on their laurels" and do the coastal Reotahi Bay walk at the base of Mt Aubrey. Relaxation over we were ordered into Big Blue with Mt Aubrey climbers first in, then coastal walkers next, as they would be first off. This all "turned to custard" when we missed the coastal drop off, so a lot of discussion ensued re pick ups and drop offs ,which turned out to be within about a kilometre or so of each other.

A small band of Mt Aubrey climbers set off again, as usual steeply up well-made steps. Mt Aubrey is only 216M with three eroded volcanic humps so an undulating track with even closer views and sounds of Marsden Pt -good to see a couple of tankers berthed keeping our supply of fuel flowing. Nearby is a huge area of logs, looking like stacks of matches - waiting to be exported.

We were soon dropping down steeply toward the coast and followed around past the concrete foundations of the old early 1920's meat works, and to the road end just as the coastal people arrived. They had felt a little self conscious, as part of their route crossed over many back yards. Some carried on to the meat works site & back. By Keith

Another fine day and a 20 minute drive to Three Mile Bush Rd brought us to the start of the two forest loops. Attractive old hand-made stone walls line the paddocks here.

Most of us decided on the easy going 3 hour loop through impressive and beautiful Totara and Kauri forest with the winding Mangere stream, for good measure. Seven others opted for a longer ridge loop, described as 'challenging' but they arrived back at the bus at the same time as the rest of us, having done both loops. Lovely forest. By Anne Stone

Packed for home, but first, those of us on Big Blue, explored Quarry Gardens, a major effort by volunteers, to turn this old quarry into a very varied garden. Then a coffee stop, a cheese stop, a bread stop & an 'antique' stop, before making it back to Auckland.

Many thanks to Brian for leading our walks, to Bob & Keith, our ever obliging drivers, and to everyone for good company & pleasant times.