It wasn’t an auspicious start to the weekend when I arrived at the yard to find our drivers discussing oil - on the floor of the garage, dripped across the yard, and leaking from the oil filter under the bus. Phone calls to Keith, then Keith on the phone for some time trying to locate someone to assist. Eventually contact was made with Dale of Browning Motors (our bus servicing / maintenance company), and yes, he was on his way in from Helensville to look at it. We finally drove out of the yard around 9 pm, and meanwhile Tina, our North Shore pickup, had not wasted any time - she was having a few wines with her neighbour!

So then a trouble free drive north to Kai Iwi Lakes motor camp and a dry, if a tad windy, night for those tenting and Malcolm under the bus.

After getting our bearings in the morning, the beach party set off in good time, first up the road, and then up and down along a marked track across farmland before dropping down to the beach. Quite windy from the NW, so of course we set off in a NW direction up the beach - and so it would be for all the beach walking during the day - walking into a strong headwind on a cloudy day - in fact it got more and more murky until I realised it was beneficial to clean my sun glasses every few hours! An amazing difference ........................... 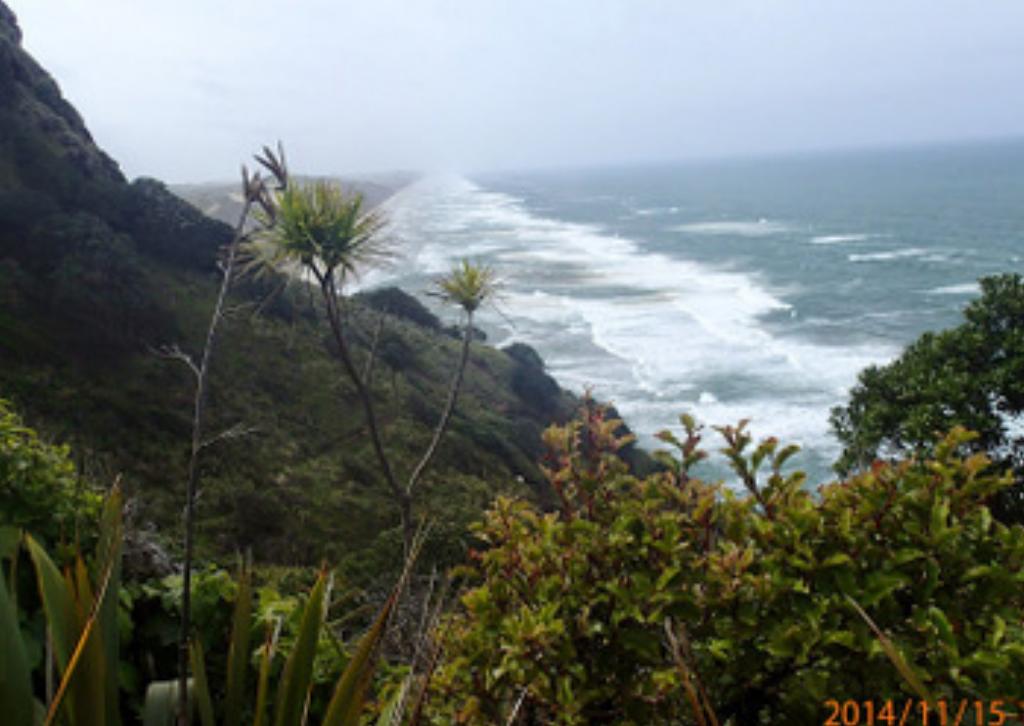 We were grateful for respite from the wind at the Aranga beach settlement, in the lea of our next section - the Maunganui Bluffs - it’s not every day a stroll along the beach has you climbing a 459m hill - it did provide some wind cover for most of the way, but definitely a hill to be reckoned with. A very dramatic drop down at the northern end to Waikara Stream, where we rejoined the beach for the continued slog north.

The trip has two notable rivers to cross - the Waipoua and the Waimamaku, with all instructions saying to cross these within cooee of low tide. In the event the beach trekkers reached the Waipoua close to high tide ... and walked across easily without needing to link up - by all accounts the next day this would not have been possible because of the heavy overnight rain.

At low ebb at this point was the enthusiasm of the party for continuing on much further - mutterings like "she told me it would just be a stroll along the beach", "I am SO over beach walking" - so not long after a campsite was found in the Hahaonui stream valley. A chance to check out all our tents - a new one for me, a terminal one for Kay, and generally testing their ability to stay up overnight in a sandy area, with some heavy rain and at times strong winds. 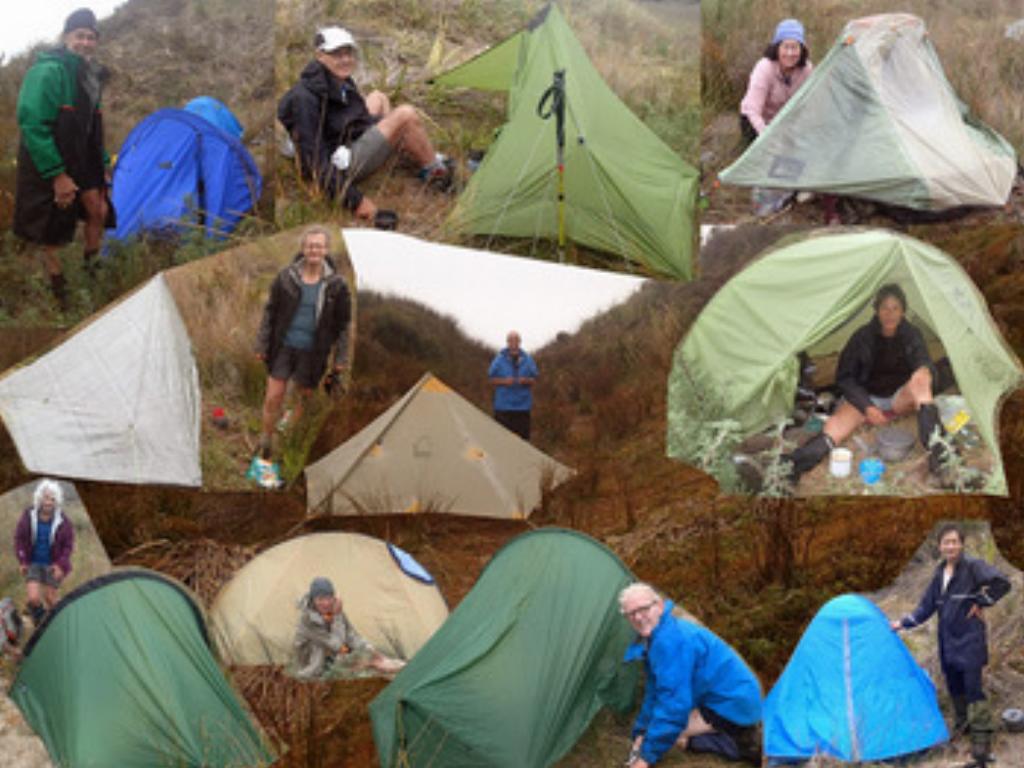 The strong NW wind had kept the forecast afternoon rain at bay, so once it dropped during the evening, in the rain came. But it all cleared again by the early hours of the morning, so we awoke to a clear day, sunshine, and the prospect of a more relaxing beach walk ahead of us. Concerns around drinkable water were addressed by the usual means - tablets, boiling, and just using the (discoloured) water from the one stream (Waiotane) recommended to Garry by DOC - I am still alive and well to prove it.

From here north the coast becomes progressively a mix of rocky points and sandy beaches, and the track spends more and more time away from the beach itself. Of interest was the old hotel / store / everything else building at Kawerua once a centre of the area for gumdiggers and cattle drovers on their way up or down the coast.

The timing of the weekend was focused on getting to the Waimamaku River on low tide - which we did. A deceptively viable river for crossing became progressively more challenging, with linking up being needed, and the collection of the occasional stray from mid stream. But cross without incident we all did. Everyone except an unlucky Malcolm amazingly avoided a patch of quicksand on the north bank - on a previous club trip here there was quicksand in the stream itself, so we were glad that this was not the case this time. 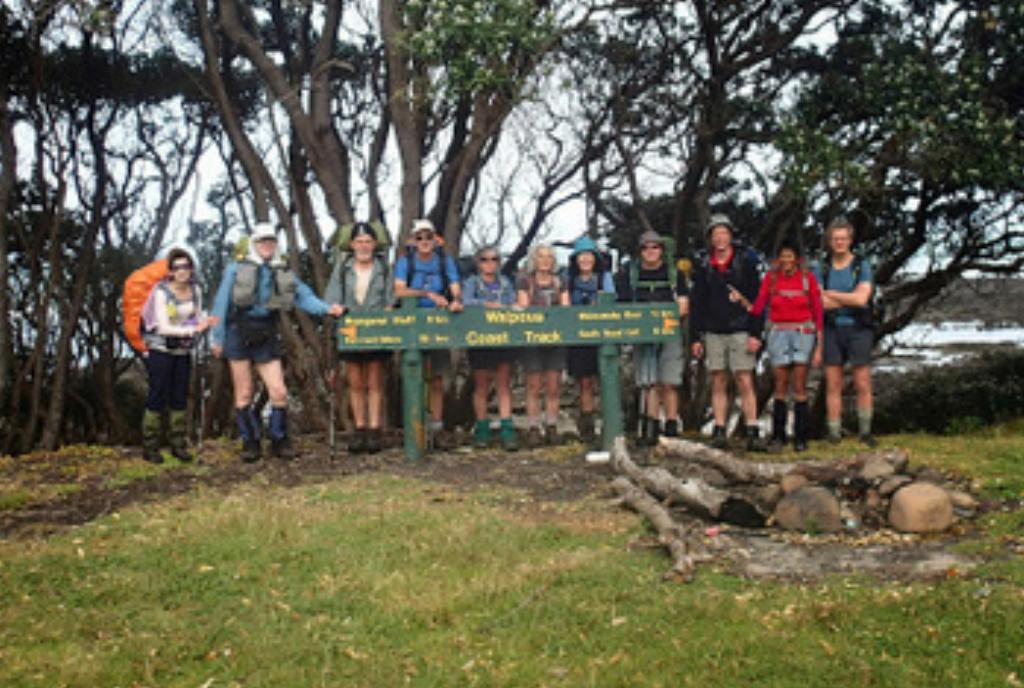 While we were organising ourselves to get moving again, we noticed some hunters and their dogs crossing the river - the dogs were struggling, poor things, but managed in the end.

After not too long we seriously did leave the beach and followed a clifftop track for some time - fine day, gentle breeze, some great coastal views. Played with dodging waves in between the rocks in one coastal section ... After a final climb up onto South Head we came across Athol; and Martin from the bus minding group, and at the bus also was Larry too. Time for recharging our energy levels at Opononi before piling into the bus for the journey home.