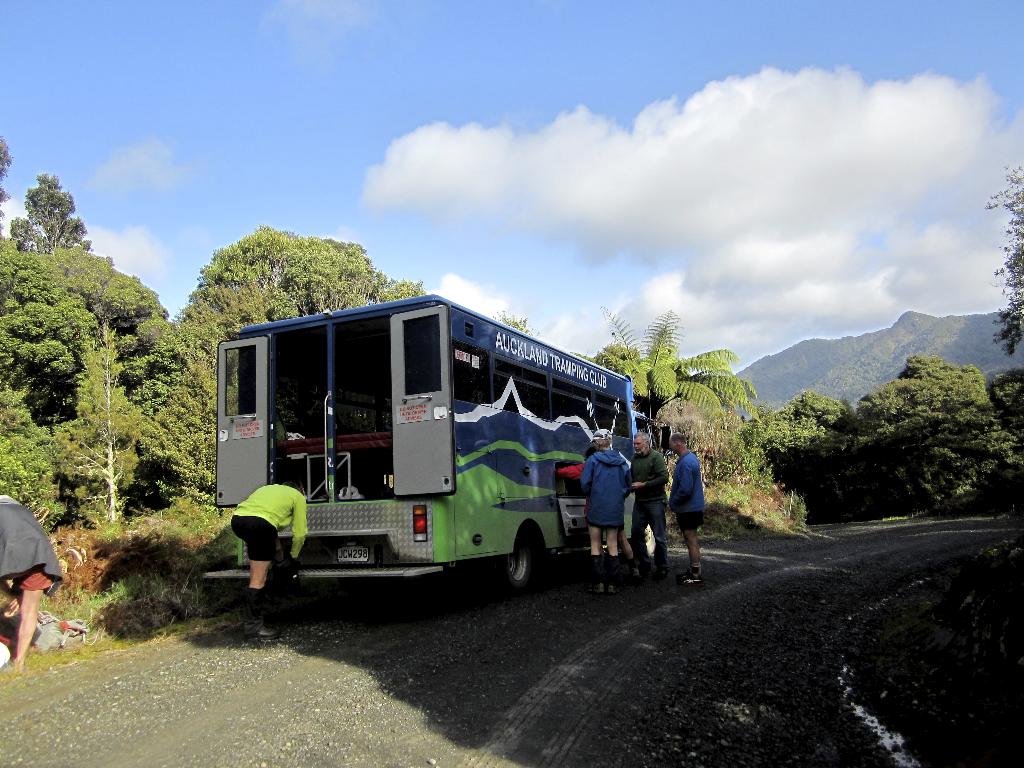 It was my first trip on the new Big Blue, but uncannily it was so similar to the old one I hadn’t realized until someone mentioned it. The weather forecast for the weekend was wet, and sure enough, we woke up to a downpour as promised.

The fit group (Margaret, Fay and Kathy) were dropped off first near the end of Wekaweka Rd, and Athol demonstrated that new Big Blue could also turn around in a very tight space.

The medium group were next off up Taita Valley Rd. On disembarking the bus, we had to quietly unload our packs so as not to alarm a herd of young cows on the road that were being moved by the farmer.

We set off on the Taita Bridle track around 9: 30am. Our destination was Framptons Hut which, according to the sign was 9 hours away. By this stage, the sun was shining and we had blue skies. We walked through beautiful mossy fern forests, and streams. It was a bit muddy at times. At one point, I was sucked into a quicksand- like bog.

There were lots of ducking under or clambering over fallen trees, but overall, the track was quite well marked. My highlight was spotting a small clump of spider orchids whilst idly staring at some mosses underfoot waiting for Tony who was looking for a water source. We also saw evidence of the kauri snail by way of empty broken shells. 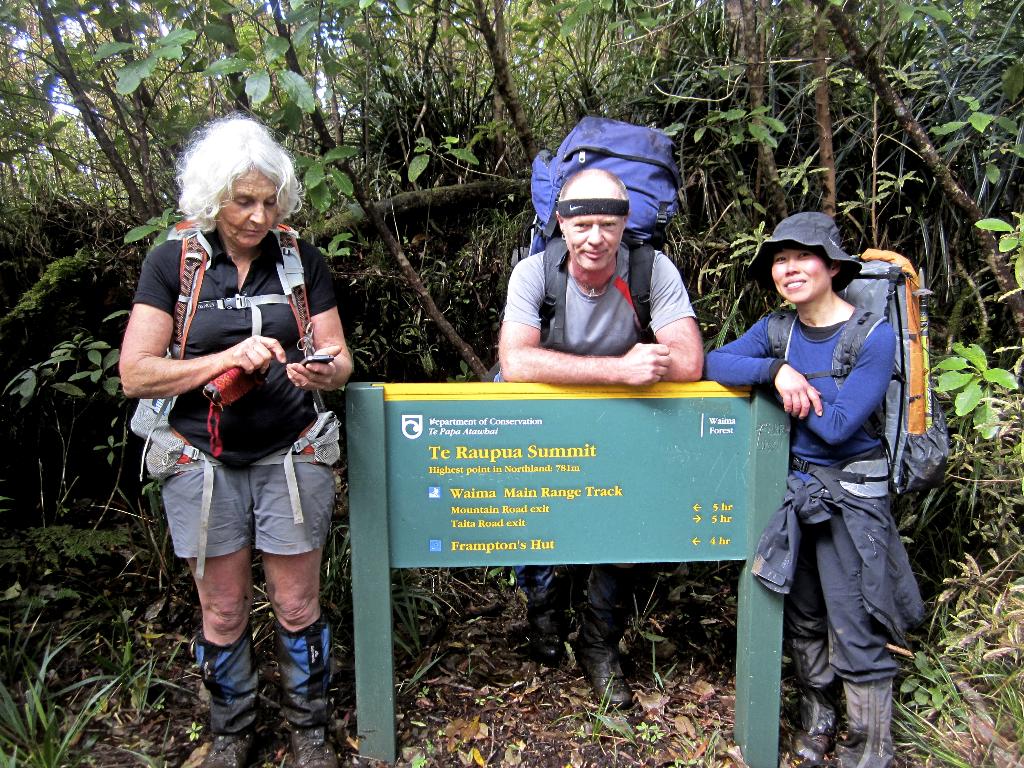 After steep uphills and big treefalls we came to the Te Raupua Summit, the highest point in Northland. By this point we were getting concerned about reaching our destination by nightfall, so we were very relieved that the track became undulating and easy after this. The day ended with a muddy walk up a 4 wheel drive track, reaching Framptons hut around 5pm. The hut turned out to be more of a small cottage than a standard DOC hut. It had a bath in the back (no plumbing), but no toilet. All that remained of it was charred rubble and corrugated roof tin on the ground.

Out the front was a huge patch of flat grassy area perfect for camping. We were spoilt for choice as to where to pitch our tents. Coincidentally, 3 of us brought along a family of different zpack tent models.

That night, just as we all settled into our sleeping bags, the unwelcome sounds of several 4 wheel drive vehicles and loud voices emerged at around 9pm, one of which screeched to a halt less than a meter from Tony’s tent. After some clarification with Rob, they turned out to be a rather nice group of local youngsters who have some association with the hut and are regular visitors.s

We awoke to rain again the next morning. The 4 wheel drive track to the junction had turned even more muddier. We spotted one of the cars stranded partway up the track from the night before.

On the 3.5 hour walk out to Waiotemarama Gorge Rd, after passing over the Hauturu high point and travelling down a narrow ridge, we came across a major stand of kauri trees. Robert, Tony and I did a detour around an extra loop, and saw even more giant kauris.

At the end of the track, after a lovely clean-up in the river, and lunch by the bus, we heard Antal gesticulating excitedly about an elephant. This prompted more investigation from the rest of us, and gradually we all went off to investigate. It turned out to be a good sized model elephant outside a quirky shop called Labyrinthe that specialized in puzzles and local works of art. It also had a maze garden. 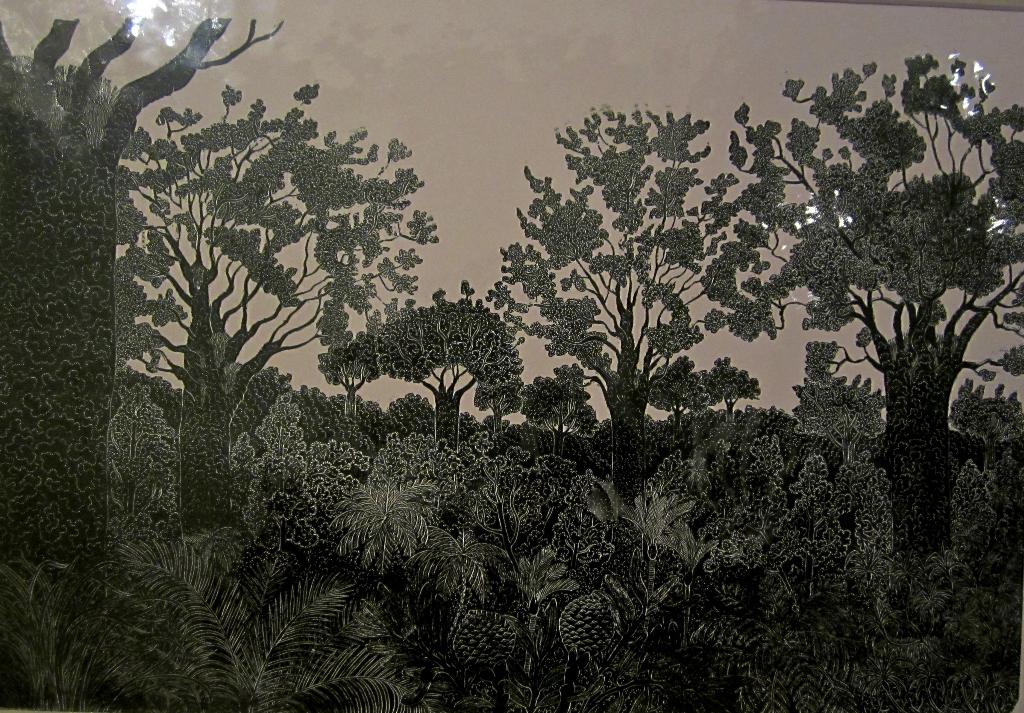 Thank you to Athol and Lawrence for driving us, Tony for leading and Margaret for the trip planning.