The historic Waoku Coach Road was built around the 1900's to join Dargaville to the Hokianga Harbour. The easy gradient was made for six Cleveland Bay horse teams, pulling coaches of people and supplies for the early settlers.

Two hundred acre blocks were offered to men returning from World War 1 as ballot farms. Due to the difficulty in clearing the land, all eventually forfeited their farms, with the exception of Honeymoon Farm who retained their title for the felling of large rimu trees in the 1960’s.

Honeymoon farmers brought the land in 1987 and now maintain the tracks for recreational use in association with DOC who provide pest control and a kokako recovery programme.

We piled out of the bus at around 6.30am, had breakfast and got going at 7.25am. We walked along a gravel road, passing a milking shed and continuing up around the edge of the bush for some distance before finally entering the forest.

Apart from climbing over a few gates, the road/track proved easy going, arriving at Honeymoon Clearing at 11.15am.

As we had only been tramping for around 4.5 hours, some in the group couldn’t believe we had arrived and wanted to press on.

After confirming our location, I personally was quite happy to spend a lazy afternoon lying in the sun and exploring. Fay and Rob were keen to keep moving, so I sent them on with instructions to return once they had found the best campsite, which they excelled in finding a lovely sunny spot next to clean flowing water.

Once the tents were up, Fay and Vicky decided to explore the track ahead.

By 4pm the temperature had dropped significantly and we began to wonder where Tony’s group was as we thought they were also planning to reach this clearing. By 5pm the cold southerly had definitely arrived, so it was back to our tents for dinner, a bit of a chat before retiring to our warm sleeping bags at 7pm for a long and windy night.

Up at 6.30am, still cold and windy outside, I was a bit slow getting out of my sleeping bag. I could see others getting ready, so it was a quick boil up for breakfast, drop the tent, pack the bag, and away by 7.45am.

The weather was cooler than Saturday but still with patches of sunshine.

The track had suddenly got narrower and muddy, more like your typical NZ bush track. 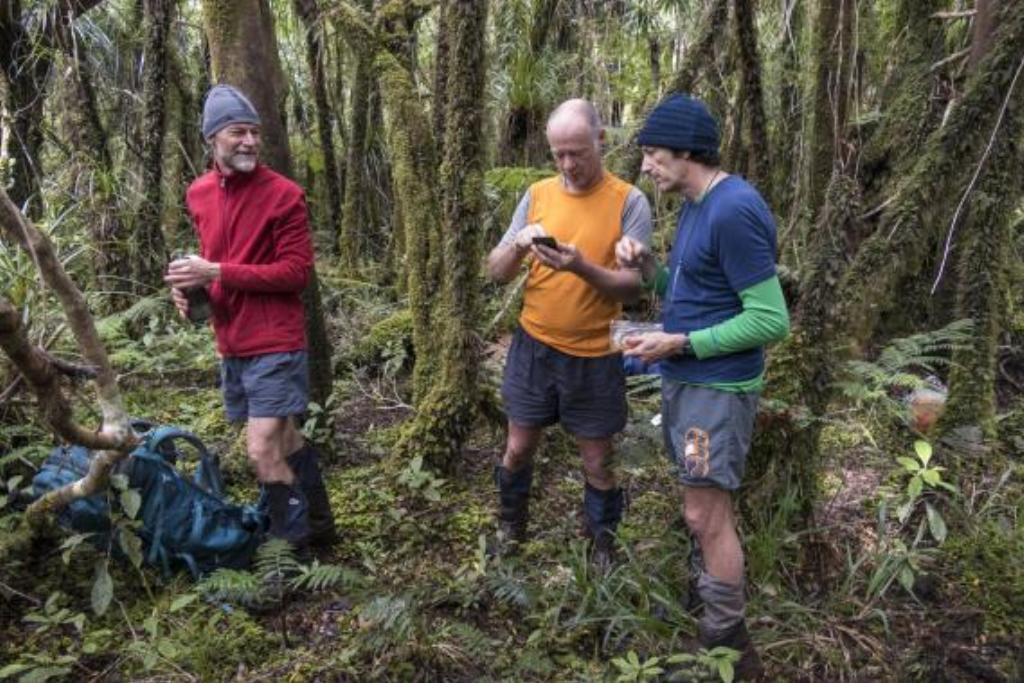 We came across Tony’s group about an hour later and exchanged details on the track ahead and the night’s camp. I definitely think we had the better deal, although today we were going to have to negotiate mud and tree roots.

The forest track was wet and slippery but also covered in beautiful mosses, which compensated for the occasional stumble. The Waima Main Range Track was fully tree-covered with few views and lots of up and downs, as expected with a ridge track.

We reached Taita Bridle Track around noon and started our descent into the Oraora Valley. Around 12.30pm, we reached some large tent flys which we later learnt are used by the local pest control when they come in to rebait their traps. It was a pleasant place for lunch with dry seating, a view down the valley and even a bit of sunshine - perfect.

We knew Tony’s group had a shorter trip than us today so the pressure was on to keep moving as we did not want to keep them waiting any longer than need be. We continued on down the valley and gradually the track began to improve, so we knew we were nearing the end. Arrived at the bus at 2.15pm. (6.5 hours)