The weather gods were on our side with four plus sunny days forecast for the whole Labour weekend.

The trip got underway at the Sealink ferry terminal at 8.00am Friday, all four of us eager to get going, in fact one of us was there at 6.30am to get a good car park downtown (only in Auckland!).

The trip is 4.5 hours and we sat up front into a brisk easterly wind and a 1m swell in the Colville strait that had us a little on edge from spray over the bow.

Fiona our shuttle driver was waiting at Tryphena and had us quickly on the road. We had a brief introduction to the rather idyllic lifestyle living on the Island with no water or electricity supply. The solution was rainwater tanks and solar power, no problems. The island has 3 schools, two community halls, a police station, medical centre and life has improved under the Greater Auckland Council. DOC have moved themselves to an isolated gated community at Okiwi and the locals don’t appear to know them. 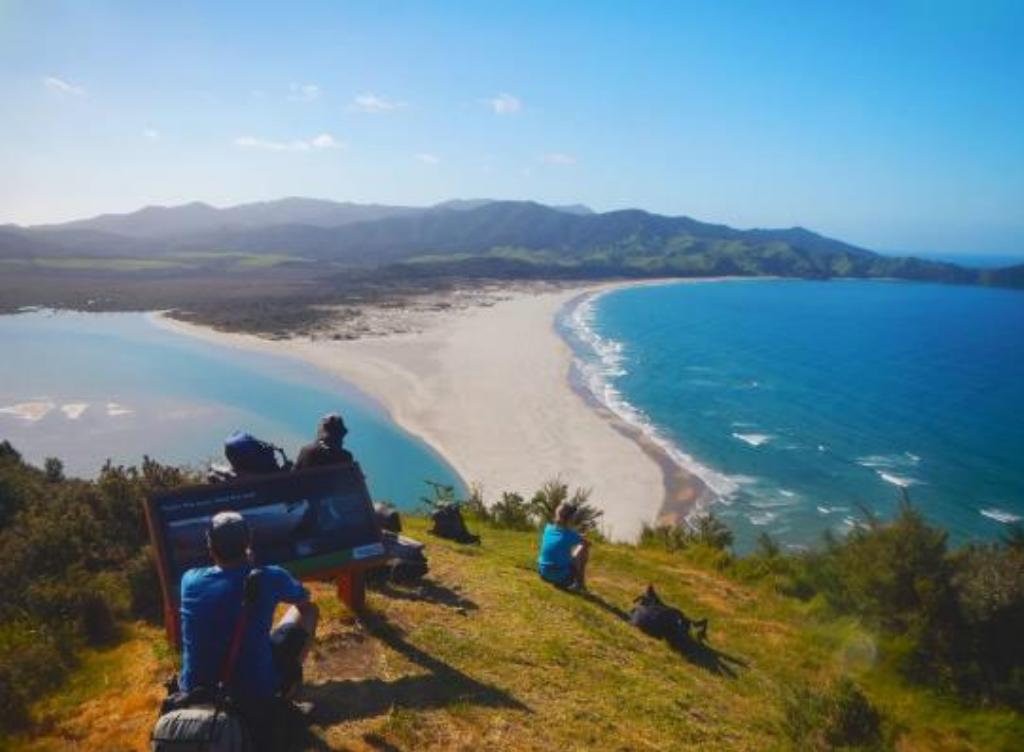 We travelled past the wondrous cove-like beaches of Medlands, Kaitoke and Awana, the white sand and rolling surf making them look most inviting.

We travelled about 35km north east to Harataonga Bay and were dropped at a most pleasant DOC campsite with large grassed areas, toilets, showers and covered dining table. No time to relax, just shed all the boating tops for a tee shirt and we were on our way. DOC time was 5hrs to Whangapoua. The track was an old pack track north, well contoured approx. 100m above the water. We only managed a few glimpses of the beaches as we passed. The track, suitable for single file mountain biking, was easy going and within 3hrs we were overlooking Whangapoua from the headland. What a view, a long 1km beach of dunes protecting a large inland swamp with mangroves and tidal estuary. We could see the western volcanic skyline of Mt Hobson and the lower northern ridges, a 270 degree view. The camp site was directly below, 2km away at the end of a grass airfield. 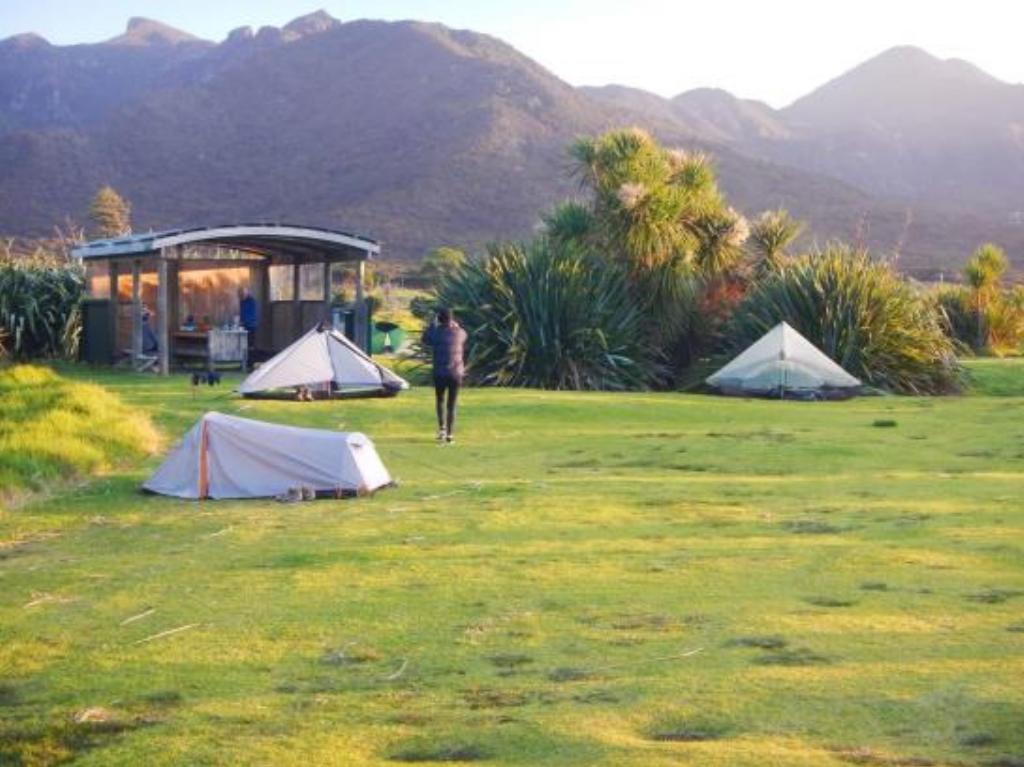 By 6.00pm we were setting up camp and preparing dinner. The camp also had very clean loos (with toilet paper) showers and covered dining area, so we were all in good spirts.

Next morning, time for a short walk at the low tide and Mike our second shuttle arrived with a van. Mike wasn’t too busy so agreed to take us to the high point on the NS road and we made a 30 min excursion to Windy Canyon, massive volcanic plugs with vertical sides towering up through the bush with a track of steps through and up to the tops. Again great 360 views, well worth the visit.

Mike then took us west to Port Fitzroy and dropped us at the Glenn Fern sanctuary. The private trust set up by Tony Bouzaid (the one ton boatie) has a 2m fence across a small peninsular. A one hour circuit thru the bush to another wonderful view point of the Fitzroy area. The sanctuary didn’t strike us as being overly full of bird life, but the trust had captured over 900 rats since March with liquorice. The island has no possums, stoats or hedgehogs, just rats. I suppose it takes time for the birds to learn that the area is safe to nest.

We had Mike drop our packs at the high point in the road, and we had a 1hr walk back up the Old Lady track to commence our days walking, first off Coopers Castle rock. 12.00pm start in the heat of the day was our lot. It was a long tough steep 300m climb with multiple false tops, taking us approx. 1.5hrs. Coopers Castle is a 100m cliff face at 465m altitude, suitable for base jumping with a view to die for out to the east and the Whangapoua basin. Great place for a long well-earned rest.

We carried on south dropping quickly to the Aotea DOC circuit, joining a 1m wide gravelled path with 100s of steps, fortunately going downhill in our direction. We arrived at Kaiaraara Hut about 4.00pm and were starting to look a bit ragged and worn down. We decided we would camp at the first available stream with water, but that was to elude us in that bay, the land transforming to swamp as we neared the coast. 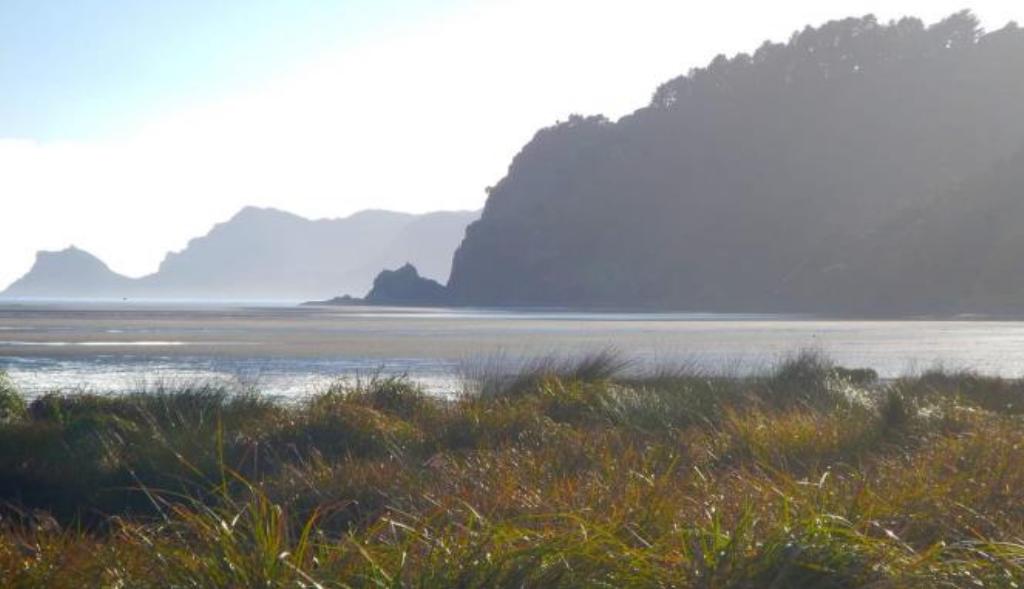 We met a couple of track walking boaties who said there was swimming and water over the hill at Coffins creek. Another 1hr walk approx. but it was a good decision. Coffins Creek like most on the eastern side of the Island was flooded in the great storm on the Island in 2015.

The debris was still from bank to bank at least 1m high through the bush and as we would see further on, the inlets are all strewn with logs at the top of every inlet and junction with a creek. We camped on sandy flats amongst the logs, but the water was clear and plentiful, time for a stand up wash. Again a pleasant night lulled to sleep by morepork chorus.

Up and away at 8.00am to a crisp morning, with a solid 200m climb up and over to KiwIriki Bay. A detour to the coast and small landing area which DOC has designated as no camping. The inlet was glass smooth, the sailing boats looked idyllic in the bay and probably the Spirit of Adventure moored off shore.

We headed inland up the creek in a most pleasant forest, finally leaving the creek for a 1 hr climb to Forest Rd. We made the 30 min detour to Mt Maungapiko, again a solid rock knob with expansive 360 degree views, well worth the effort and a bit of boulder hopping to the top.

One hour along the forest road, a 4m wide track, also for mountain biking, then lunch at a DOC bridge in the dappled sun, very pleasant. We needed to turn off here but couldn’t find the obvious track, so a bit of reconnaissance and finally found the Witheys track 50m downstream in the bush. DOC had removed the signpost to the Pack Track which they have now closed.

Witheys track was carved out of the bush as a level railway for tree haulage, built in the 1920s. All the bridges had gone, so it was easy going downstream. 1 hr down and as expected from the map the track took a 90 degree bend and went straight up the hill to 190m, again an incline railway route. A long steep climb, huffing and puffing like a steam train. Robin found an old gear wheel in the undergrowth, remnants of the tough bushmen of yesteryear.

The trail equally went straight down the hill to the tramline track and Whangaparapara Bay. 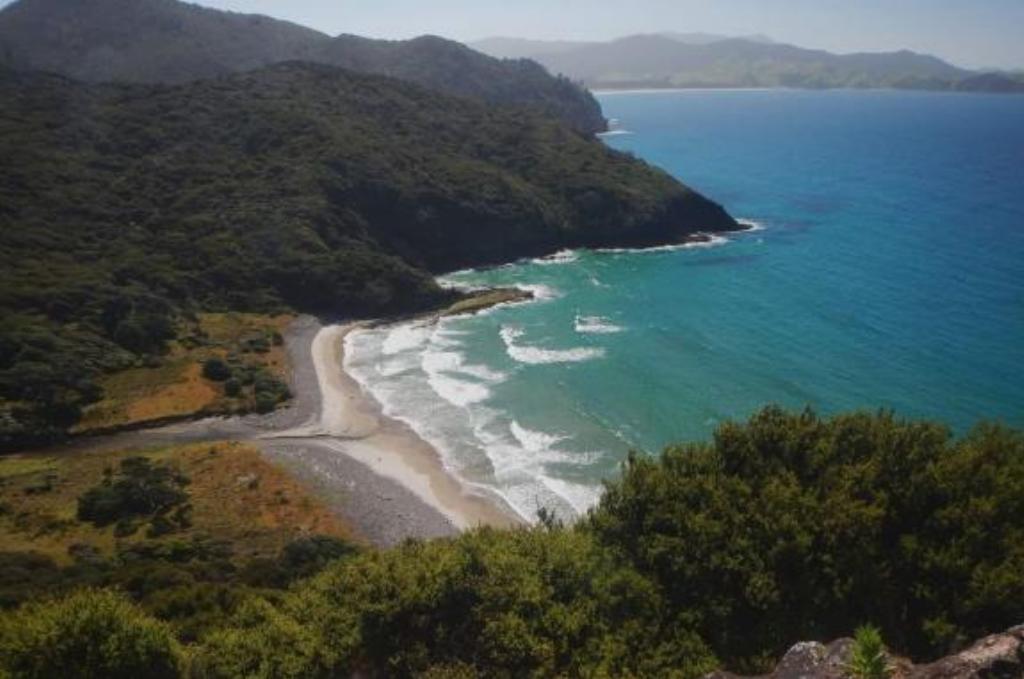 We were in the bay by 2.00pm and a 600m walk to the Green campsite on the west shore, no showers but the same good DOC facilities. A note to say beware the rats. A lazy afternoon setting up camp and relaxing as the tide came in. We had a good night, lots of kaka and tui, the rats did visit a little, but we were well prepared with rocks on the tops of all billies with food in.

Monday was relax day, breakfast, then a 1km walk over the peninsula to the legendary largest timber mill in the country for the 1920s. All that is left are a few wharf piles, concrete blocks, old boilers, and a traction engine that had been partially restored.

Further on 20mins around the rocks at lowish tide were the remains of a 1955 to 1962 whaling station. Just some old wharf piles and concrete pads. We chatted to a local boatie who seemed to have a partial residence there for repairs, a vege garden and miscellaneous steam punk items. He said it was worthwhile visiting the wharf at the end of the road on the other side of the bay for a small local free library and DOC display of mining, fishing whaling and timber.

We returned to the camp, collected our things and went out to the road and our pick up point. We had 2hrs to spare so headed for the wharf and a history lesson, well worth it.

Fiona collected us at 1.30 pm and returned us to the Sealink ferry. We had a near glass-like sea return voyage with two whale sightings and a pod of dolphins riding the bow wave for 10 minutes. All in all a most agreeable weekend.