Our destination was the Whareorino Forest which lies 20 km to the west of Piopio (on SH3), at the very headwaters of the Awakino River. Throughout the week before, Tina and I had been watching the weather forecasts of rain, rain and more rain for the weekend, so we were not surprised that the Friday afternoon forecast was little changed.

The original plan was to come in on two tracks from the Mangatoa Saddle and the Mangapapa Valley to Leitch’s Hut, but these both included a crossing of the Awakino River which DOC recommends avoiding in heavy rain. The Mangapapa Track also has additional river crossings for a respectable catchment area to navigate, so we settled for the all-weather route into the forest from the Leitch Rd end which we reached, with a couple of stops on the way, about 4½ hrs after leaving Auckland.

Given shorter tramping distances ahead there was not a great rush to get started in the morning, but soon enough the Medium-Fit party set off on the easy track along the old Leitch Rd extension. They arrived at the hut mid-morning and, after a break, set off across the ankle-deep Awakino River, up the Mangatoa Track and on to the Herangi Range.

Meanwhile, the easy party soon managed to complete their preparations, locked up the bus, and headed off in the same direction. It appears that Leitch Rd used to go all the way over the hill and down the other side to the area all around Leitch’s Hut, because in many places it was still a very well-cut, wide walking track. Once over the saddle and down along the side of the upper Awakino Valley, there were parts that are now only a single-person width tramping track. There was abundant birdsong, especially on the eastern side of the saddle, and very pleasant bush all the way down to the grassy river flats that you reach just 1 km before the hut.

The topo map says that before the saddle the track gets to 530m, then drops to 450m and then climbs to the saddle at 500m again. But we were more than happy to reach the saddle without that 80m drop. Map error no.1.
Near the saddle a DOC sign was placed firmly in front of an old track, now closed, that used to join on to the Pomarangai Track - closed because this is one of the few areas where the endangered Archey’s Frog lives and, given that their favourite habitat includes pools on relatively flat areas like tracks, trampers and frogs are not that compatible - so trampers must stay away.

Where the valley widens near the hut there is still a farm gate and fence, and plenty of grass to indicate that this was once a decent-sized farm, albeit one that would have required a major event to move animals to and from. We continued our relaxed pace, reaching Leitch’s Hut around 11.30 (in just over three hours). Time for a good lunch stop, then a call for volunteers for an afternoon stroll saw most of the party heading off downstream, then across the Awakino River (wet feet at last!) and up the track towards the Waikawau Saddle.

After leaving more grassy areas, this track was more like the real thing as it sidled along the increasingly narrow and steep sided valley - no old farm access road here! So, onwards and upwards towards the junction which the map says you reach before the saddle. Hmmm, that took longer than expected, and yes, it looks as if we are at both the track junction and the saddle. Map error no 2.
While we were catching our breath, the Medium-Fit party joined us on their way down from the Herangi Range where they’d had some views from on high. But by now we were all happy to head back down to the hut, where we arrived by mid-afternoon. Going up the track we had followed the map down to the official river crossing, and then made our way roughly in the right direction up the valley, picking up the track markers in places where the map said they weren’t. On the way down we followed the markers directly back to the hut without the earlier deviation, this time crossing the river right at the hut. Map error no 3. All reinforcing an important navigation lesson - tramping tracks on the maps are not always right.

Note the non-mention of the rain - yes, it had been fine all through the day, changing to light rain in the early evening, and heavy rain when it was time for Lee and Dennis to retire to their tents. However, by the morning it was fine again, the river was not up, and all parties could set off back up Leitch’s Track to the bus.
The hut itself was very comfortable - two bunk rooms with Maori bunks catering for a standard 16 people. With our indoor party of 11, it was therefore no issue to accommodate another party of four Aucklanders who turned up early evening, having come in from Mangatoa Saddle. It was a cosy evening with a warm fire, warm hut, and great company - discussing, as one does, many topics, including past trips and future trips - Christmas is not that far away, after all. 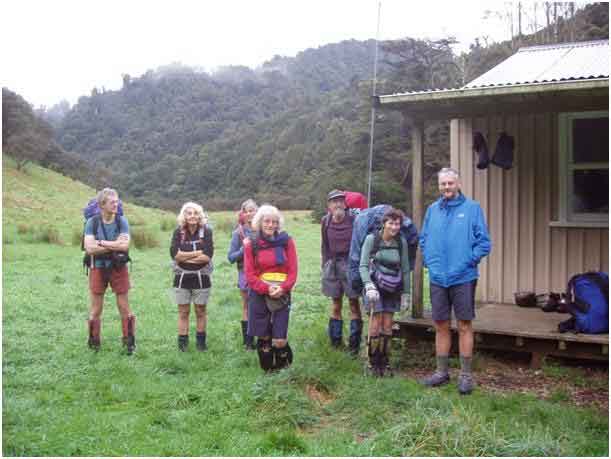 On reassembling at the bus, we set off via a map direct route, but ultimately not the most comfortable one (there are only so many twists and turns in the pleasant Waikato hill country with views out to the east which you can really enjoy before you start wishing for some straighter roads). Destination - the Te Anga road that runs west from Waitomo Caves to Marokopa, and along that road is the Mangapohue Natural Bridge. A short, unscheduled stop along the way at the spectacular high Waitanguru Falls, and then doing the twist all the way to the Natural Bridge - which is also spectacular with the stream passing under a two-level natural bridge that was once part of a much larger cave.
Time for a coffee and bite to eat at the new Waitomo Visitor Centre, and then a straightforward trip home to arrive back at the garage by 6.15pm.