It was a slow drive up a narrow and winding farm track with the occasional leaves from passing trees sneaking in the side windows. Finally the Rangitoto Station farmhouse was reached, and everyone gladly piled out of Big Blue to check out the varied accommodation - be it in the main house, in the woolshed (including some beds in the old sheep pens with slatted floors), or nearby tent sites. After lunch, the group split into three - faster walkers, the main group of walkers, and people who were keen to relax and enjoy the farmhouse and immediate surroundings.

The faster group (Vicky, Lyn, Antal and Tony) headed off south down a farm road leaving the station and entering the Owawenga Valley, with the first stop being the DOC Wildlife Hut - with real evidence of resident wildlife too.

Continuing on to a suggested untracked shortcut through to the main Owawenga Stream, there was an instant revolt on getting into cutty grass, so it was time to turn around and head back into the station and then on to side tracks - Saddle Track leading to Punga Track. But this time it was patches of blackberry (only a tramper’s friend when they are edible) and bush lawyer. But, bravely soldiering on up the hill, they soon reached an open top called Baldy. Aptly named, because you emerge from the dense bush on to a clumpy, open, grassy area, with good views in all directions. The Ranginui Trig looked tempting further east, but unfortunately insufficient daylight hours were left, so that was one destination to keep for another trip.

Meanwhile, the main party followed the same path down towards the Wildlife Hut, along the way meeting a school friend of Athol’s who had driven his car up the Owawenga Valley. The party continued on to the hut and enjoyed a pleasant break there, joined soon by Athol’s friend who had decided to spend the night there. They then headed back to the Rangitoto farmhouse for a cosy evening indoors with all the mod cons that other weekend trips can only pretend not to dream about …

The plan was to follow old roads and tracks north-east out of Rangitoto Station as far as the Mangatutu Biv, with the option of taking a shorter route to turn off and loop back part way along. Then back to the house by 2.00pm, for clean-up and a 3.00pm departure. But…

Not that far to go, so a relatively liberal interpretation of an 8.00am start had the combined party heading off along Rimu Rd, lulled into a false sense of security by an easy walking route for the first four kilometres. At the decision point of the Skid Track turnoff, two people opted for that route, then four, then six - any more bids? In the end eight went that way, with 10 left to go only a ‘couple of extra kilometres’ further to the biv.

The shorter group hoped to descend the Skid Track to the Mangatutu Stream, cross to Hollands Hill and the Red Track, and return to the farmhouse from there. In this group were Bruce, Anne, Sue, Barry, Craig, Lydia, Tamara and Jennifer.

They followed what they hoped was a continuation of the Skid, but heard later that it was only a rodent monitoring line. They looked for any turnoff from the Skid Track down to the Mangatutu Stream, but failed to see it. So they turned around and went back to the farmhouse. Sue heard a robin, and a female whio was heard in the Mangatutu.

Meanwhile the other group was now on the Yellow Access Track, which straight away became a more standard tramping track rather than the easy walking they’d had up to that point. Fortunately, it was well marked with yellow markers, wandering its way into deeper forest about one kilometre from, but roughly parallel to, the Mangatutu Stream, with some lovely specimens of tall rimu along the way. Ticking off the expected junctions went smoothly - bait lines on either side, Beaut Track 4 Pa Ridge, then onto Pa Ridge Track itself.

The real stars of the show were the wide variety and sheer quantity of colourful fungus on the trees, and through the course of the tramp, the occasional bright blue and bright red mushrooms.

Time was getting on but again, as expected, another junction with a ‘To Hut’ sign and clear red markers appeared, following a minor side stream down to the Mangatutu Stream … where a hunter had just recently killed a deer. Then we crossed the stream, followed red markers along a rough sidling track following the stream, under a cave-like tree-fall, and past a couple of stream junctions to the Mangatutu Biv, arriving at 11.45am, just 3½ hrs and 7½ km after leaving the farmhouse. Time for lunch in the sun with only wasps to keep us company, so the wasps and the promise of a longer afternoon than expected had the group ready to leave 15 minutes before the planned departure time - talk about keen!

Back along the stream to the crossing point, and then an even slower section for a further 300m sidling alongside the stream where the markers were very hard to find, the hillside steeper and with plenty of tree-falls for good measure. We were now on to following the official Red Track with red markers, but every so often this needed a bit of a hunt for the next marker because of the frequent tree-falls and, later on, the more open nature of the forest floor.

From Skid Track on we had been following track routes taken from a black and white scanned map containing hand-drawn tracks which had then been transposed onto a topo map, but these generally served their purpose.  So we were now, again as expected, following the Red Track up the hill away from the steep sides of the Mangatutu Stream and into an easier undulating terrain. Just to prove that all was under control (?) we temporarily exchanged red markers for pink bait line markers, but some careful GPS, compass and map work soon had us back on the main track.

It was still slow going, and on reaching the Hollands Hill bait line at 2.15 it was time for a break, and then a chance to spot the footprints from the other group who would earlier have joined the track around here but there were no footprints to be seen. Then ever onwards, across side streams, up and down and around until reaching the next crossing of the Mangatutu Stream, with a major track junction on the other side, with the welcoming ‘Red Track to House’ sign - we were now back in Rangitoto Station.

But it was another hour before we joined the Ranginui Rd. We arrived back at the farmhouse at 3.50pm, 7½ km after lunch. 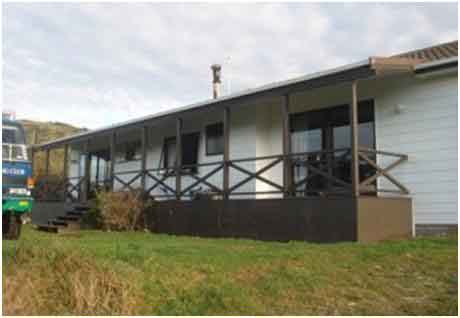 A quick pack-up of the remaining gear, then in just half an hour Big Blue left on the narrow winding road down the hill. Some light entertainment, as we wound our way slowly downhill, came from the cattle that were running in front and behind the bus for a long way, no doubt not wanting to be separated from each other. We finally helped them to find the open grass section of their paddock again, although still some of them wanted to follow us to the next gate where, unfortunately, we had to leave a budding friendship behind!

A big thanks to Keith, our driver, for his superb, careful driving on a tricky track, and to Athol for opening all the gates along the way, especially the one where Big Blue couldn’t stop to pick him up for some distance.

Thanks to Mike and Sharen Graham, for their recce, for their suggestions of routes, and for the map of the pest control tracks Thanks too to the NZ Native Forests Restoration Trust for their hard work in establishing such a worthwhile venture, and to Athol, our weekend trips officer, for making the arrangements with them.

3. The comfortable accommodation at Rangitoto Station