We arrived to a full car park at Lindemann Road end on the Friday evening. There was a torchlight invertebrate tour underway and around 25 people had gathered to look at specimens along the stream at the end of the road.

Saturday morning - views across the Bay of Plenty, but above us the ranges were shrouded in mist. The weather forecast had not looked promising - drizzle in the morning followed by rain "some heavy falls likely" in the afternoon - so we were expecting to be in for a wet day. We took the western "steep" option of the Lindemann loop track and were soon gaining height. The remains of a kauri dam were reached on time (a lot of imagination needed) then onto Wairoa Shelter and the new North South track. By now, the mist had lifted and the sun was trying to break through. We stopped for morning tea before girding our loins for the several hours of bashing along overgrown tracks. The Cashmore Clearing track was reasonably well defined underfoot, unfortunately we could not see it most of the time because of the cutty grass. A couple of hours stumbling along this, a threat of stop work action as customary lunch break time of between 12 and 1 had passed, resulted in lunch on the track using aforementioned tufts of cutty grass as welcome recliners. 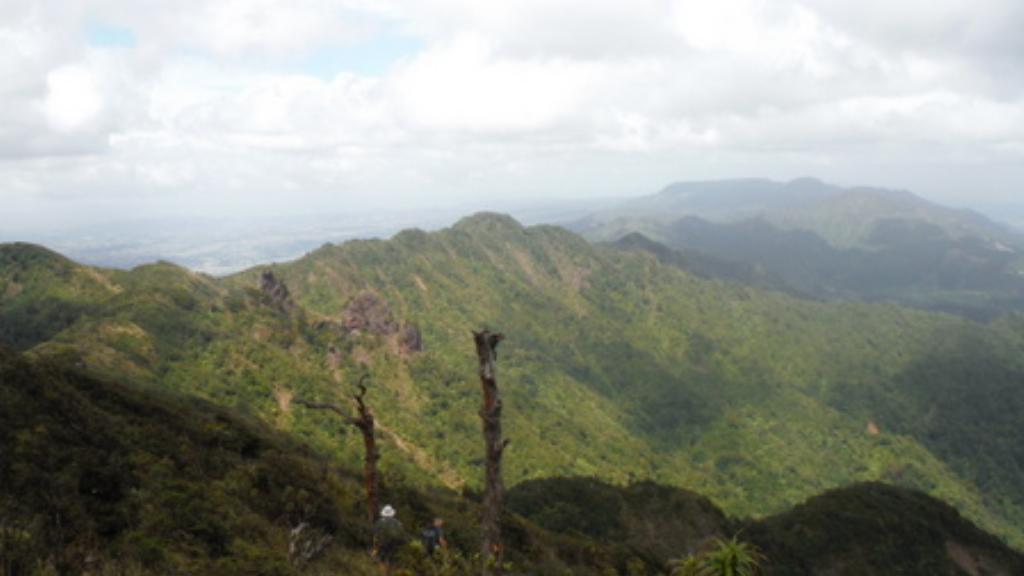 West, south and east all looked well with the weather, but to the north, the clouds were dark and there looked to be rain falling north of Waihi.

The old North South track was reached - Te Rereatukahia Hut 2 hrs said the sign - 4-5 hours ominously scratched above. The track started out well through some mature trees, but once we reached regenerating areas, it was back to cutty grass and thickets obscuring the grass. Denis "secateur hands" sprang into action, snipping away at growth across the track and "Mr Saw" helped out on some of the thicker growth.

There were not many large obstacles across the track and it was reasonably well marked - like the morning, the main issue was the cutty grass obscuring the track. Waihine Rock was reached and we debated which angle best represented the female form (reasonable amount of imagination required). We thought the track would improve from here, but it did not. A couple more patches of regenerating growth, a sidle round Tangitu and onto the summit of "Baldy". There are normally good views to be had from here, but by now the dark clouds had swept up the Hauraki Plains and rain was obviously falling. The hut was reached at around 5.30pm with the last member of the group, being swiftly followed by rain and strong winds. Needless to say, no one decided on the tent option that night. The rain did not last too long, but the wind persisted through the night. 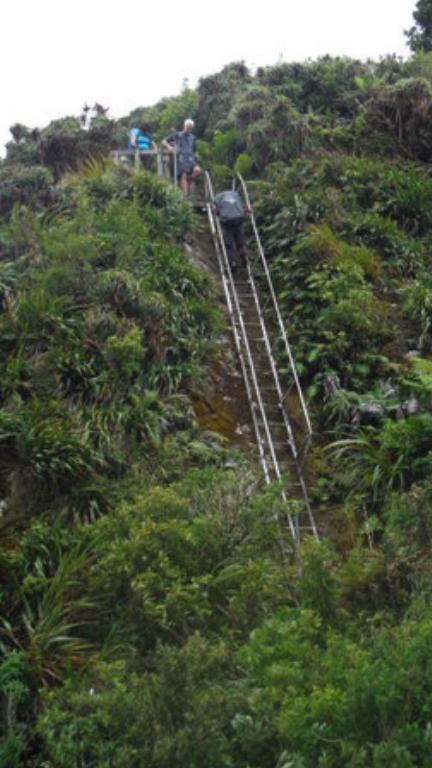 Sunday morning - low cloud and strong winds. We delayed starting for half an hour, hoping that the cloud would clear and by the time we reached Tuahu Track, the mist was lifting, but the wind was still blowing strong. The next section of the track was a roller coaster ride across an untold number of knobbly bits (Abseil Peak, Queen Victoria Head, Kakarahi ....) with assistance in places of cable, knotted rope and three ladders.

The wind died down as the morning progressed and we reached Motutapere Hut for a late morning tea / early lunch. Eliza track junction - decision to come out on the west was queried as track signs indicated it was 1.5 hours longer than on the east. We carried on south and on breaking out of the bush, we briefly discussed a short cut along a grassy tongue down to Thomson’s track below. 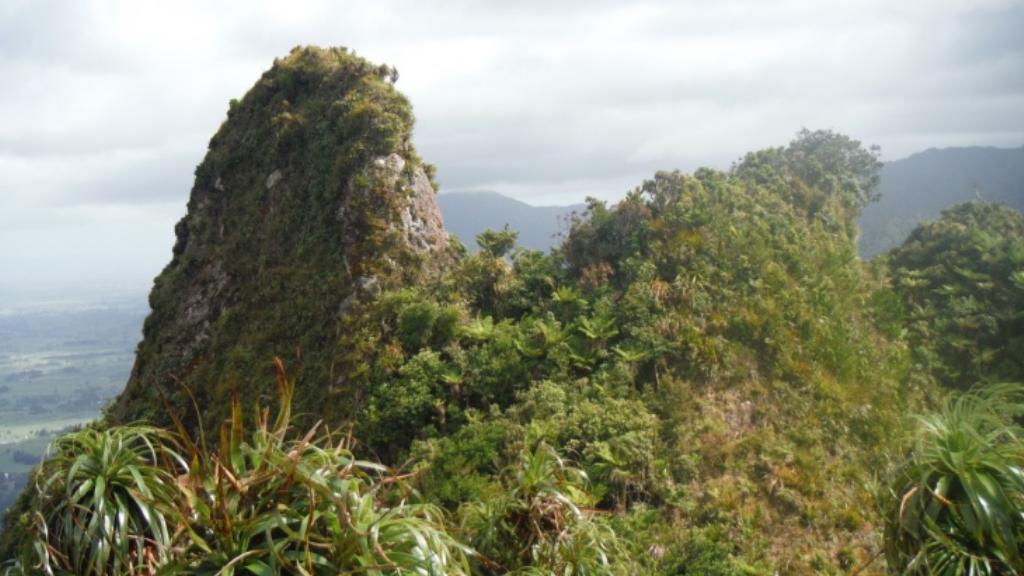 Photo: One of the many knobbly bits

This would have involved a couple of hundred metres of bush bashing so sensibility prevailed and we continued to the summit of Thomson’s track. According to track signs we still had another 3 hours to go, however unbeknownst to us, this was to the end of Thomson track road and the true rough track ended a few kilometres short of there. So, just over an hour and a half later, having successfully avoided going astray on the logging track pervading the hillside, we emerged at the road end to the sound of the club bus chugging up the gravel road. Whilst being slightly more strenuous than your average walk in the park, this was a welcome visit to an area which whilst being in easy reach of Auckland, is seldom visited by the club.

Those participating in this tramping trip - with a bit of topiary thrown in were Denis, Katherine, Mike, Ming, Sabrina, Simon and Martin (leader and scribe)