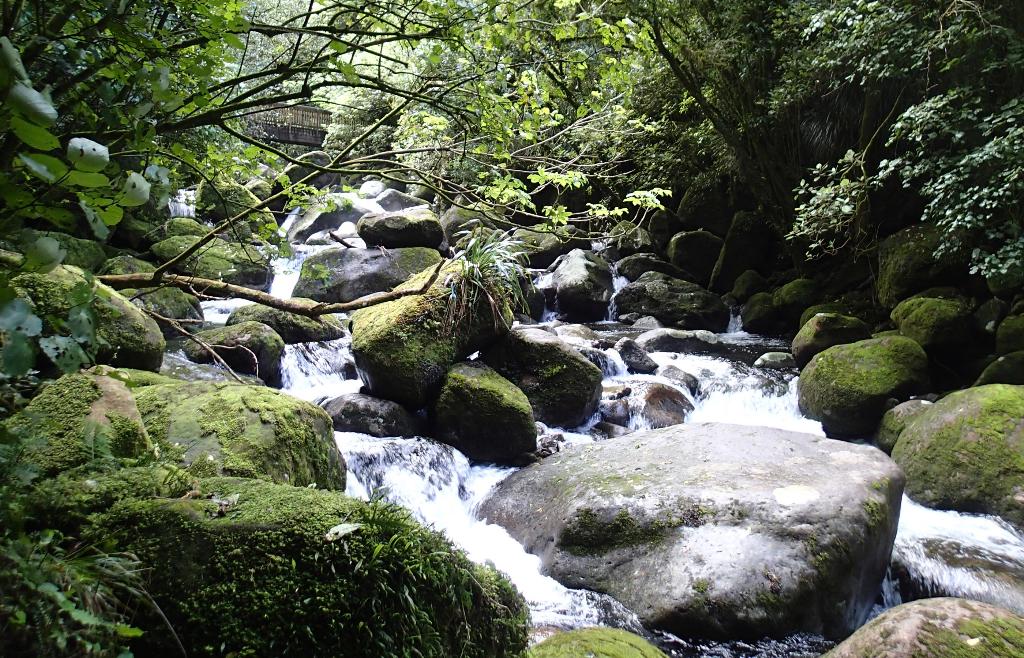 After a short bus trip south to the start of the Wairere Falls track, we commenced our tramp at around 8.30am. The track up through bush and alongside the Wairere Stream to the lower lookout platform is beautiful with mosses and ferns combining to offer every shade of green, particularly if the sun catches them. Many small bridges across the stream and a staircase up to the lower lookout make this a very pleasant walk.

The climb to the top of the waterfall is somewhat steeper and a few of us were puffing a bit by the time we reached the top. At the top, rain and low cloud had settled in so there were no views of the Waikato to be had from the upper lookout. Only half the group ventured out on to the platform as the wind was catching the water falling down the falls and blowing it back up and onto us. 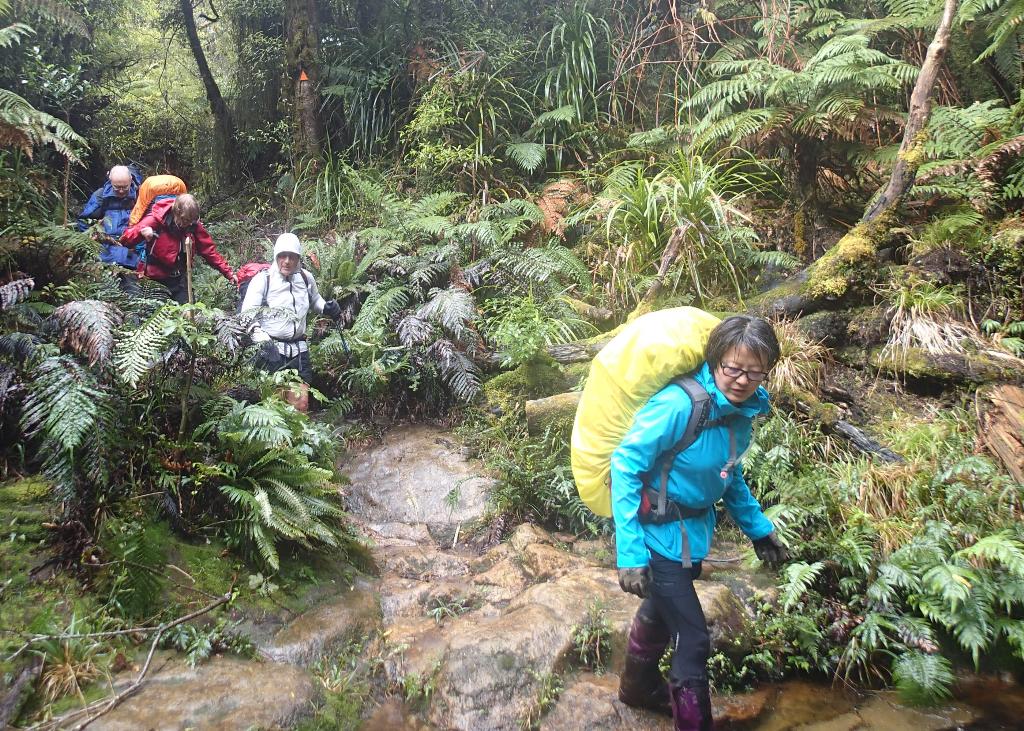 A right turn onto Te Tuhi Track led us to the Northern track entrance to Mangamuka Hut, our destination for the night. Before arriving at this junction, I had a minor slip into a stream resulting in getting my socks wet; fortunately I still had my over-trousers on so that was all that got wet. 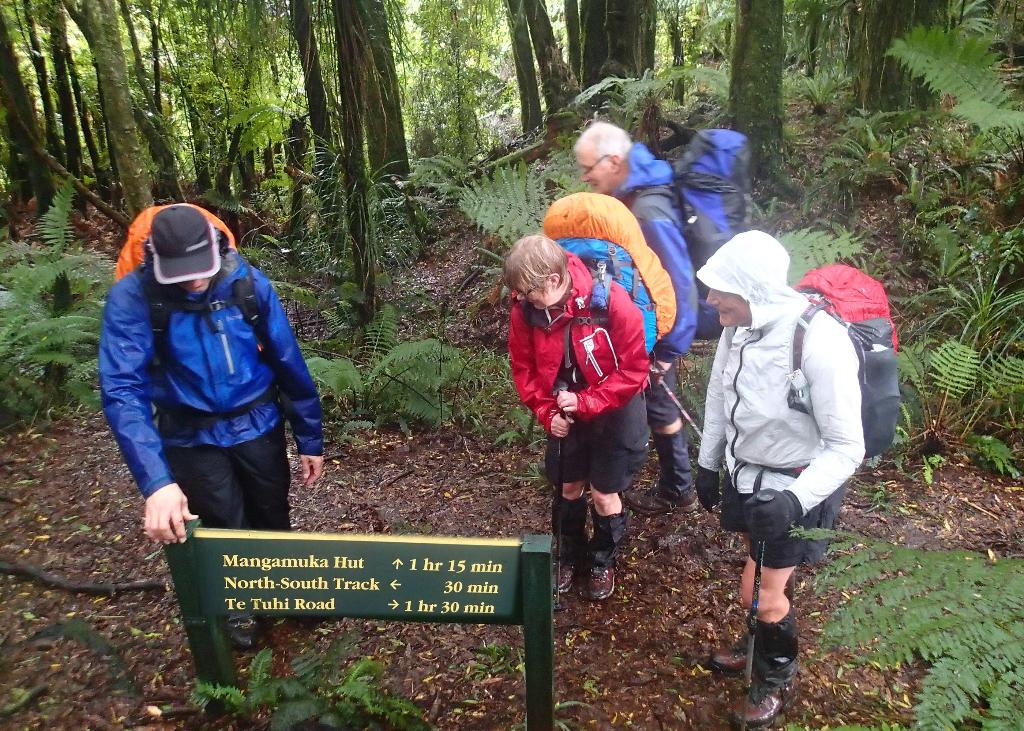 The track to Mangamuka hut was unexpectedly in good condition with just a few muddy patches and completely bush covered. Being on the ridge line I thought it was going to be open grasses and muddy much like the track into Kauritatahi Hut that I had done a few years back.

We arrived at the hut around 3pm and, as the hut only sleeps 4, Murray and I put up our tents in the nearby camping area. The ground was a bit lumpy but relatively sheltered by surrounding trees blocking any views of the Waikato. The hut has recently been re-clad and was quite warm and cosy inside, so we had no need to light the open fire even though there was chopped wood to burn. 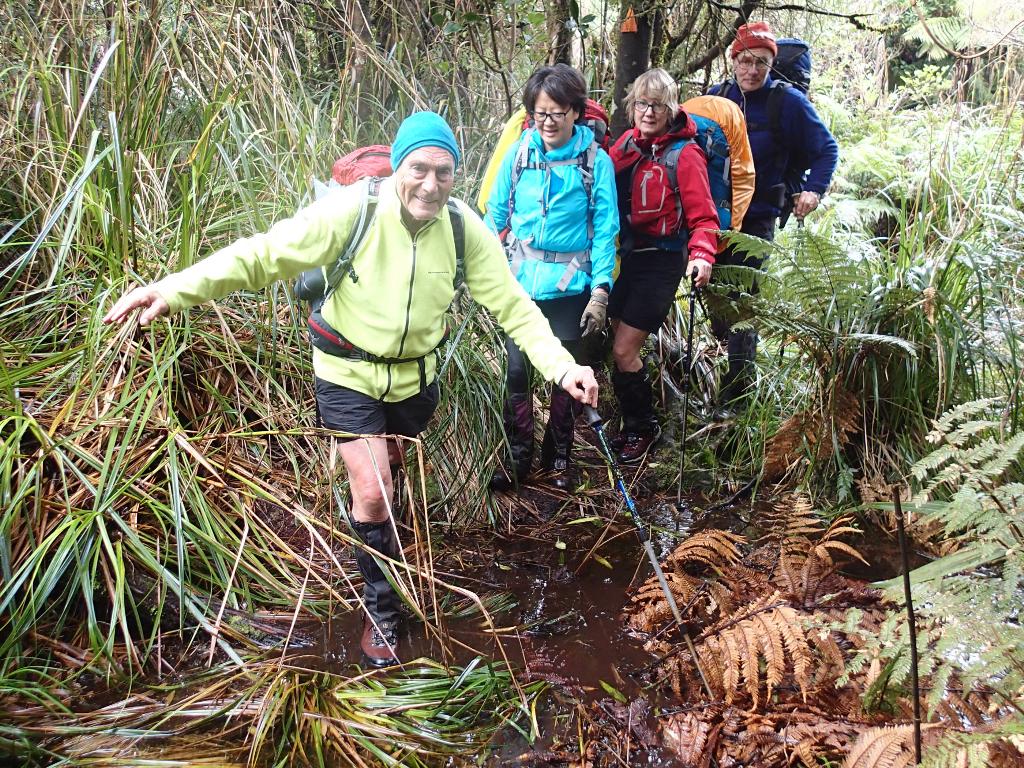 We were to take a different track out the next day heading east to re-join the North South Track to return north again. We got away at 8.15am and soon found ourselves lost in gaiter-deep swamp with tracks appearing to go off in all directions. On backtracking to the last marker, we found our mistake and got back on track. After about 500m of swamp, the track improved and the pace picked up until we got to within 200m of the end where the markers and track suddenly stopped. We decided to bush bash which eventually brought us back to the track. On reflection, we had got off track by following some old Permolat markers and should have backtracked to the last orange marker to get back on track again.

At the North South track we met the tail end of Tony’s fit party and followed them out to the Ngamuwahine Shelter where we found the rest of Tony’s group having lunch in the sunshine. As it was only 11am we found this a bit odd, so after a quick howdy do, continued on ahead of them. At 11.30am we turned east onto the Te Tuhi track and proceeded to the Mangamuka track junction again where we stopped for lunch with Garry from Tony’s group.

From here is wasn’t long before we were heading down hill to eventually come out on farm land which we traversed to arrive at the bus on Te Tuhi Road at around 2pm. A quick trip back to Te Aroha, picking up the Kauritatahi Hut group on the way, where we stopped for a beer and a bite to eat before heading back to Auckland.