On Saturday the 15th of December I was lucky enough to join 14 others on an Auckland Tramping Club trip to two mountains near Raglan (Pirongia and Karioi). This trip was different for the club (it was explained to me) because instead of the usual Friday evening departure, we left early Saturday morning, travelling in the club bus (a kind of travelling sofa-bed) and got to the base of the first track at about 10am. ‘Uncle Russell’ (my godfather and Dad’s good friend) had us each introduce ourselves and said we should ‘keep together’, and ‘not go the wrong way’ etc; and off we went, walking up Mount Pirongia [959m]. 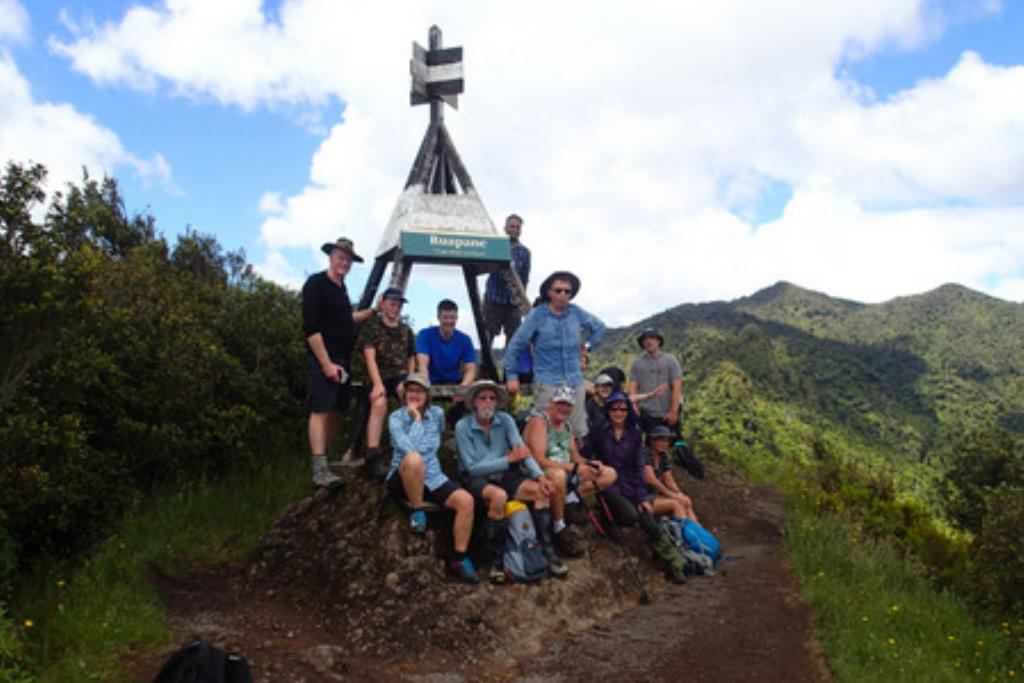 The first climb, up to the lookout, took about an hour. I found it very challenging but rewarding, as the lookout provided views in all directions - Hamilton in the distance. Magnificent! I felt in awe, and yet intimidated by the stamina of the club members, and wasn’t sure if I would make to the peak, but by the time we got to that lookout, my spirits were up again and I continued on. 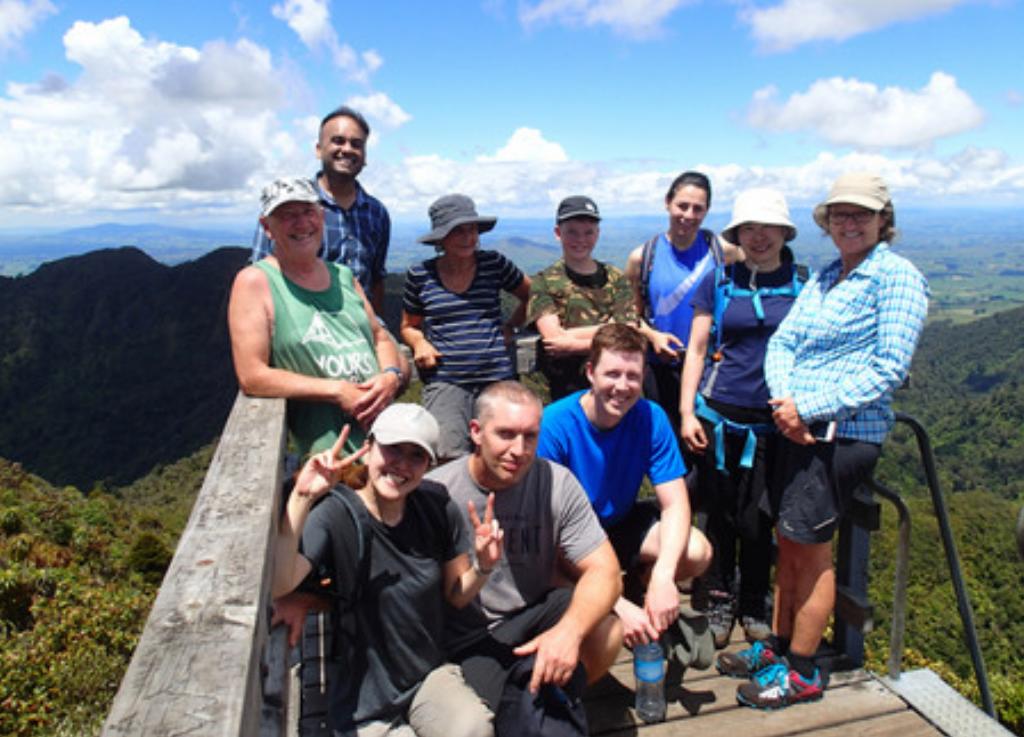 This lookout, with its fabulous views, was just the first of many on this trip. After the lookout, we descended into a col along the ridge top (I know what a col is now), at times using chains to manoeuvre the steep, sometimes damp cliff. I found this was a different kind of challenge to the walk up, and certainly more fun than the previous slog. At the bottom of the steep descent, we climbed up again for a while, and this fatiguing cycle continued for about 2 hours . Lunch was next to a great rock tower, which we scrambled onto, with high cliffs on three sides! Sometimes, with all the up and down, I wondered if we had ended up higher than the car park! But in the end, as we finally reached the summit, it was clear we had come a long way! The summit had a raised platform that somehow outdid the views from even the lookout, and after a walk back down on a slightly different route, we all hopped into the ‘sofa-bed’ and took the hour drive back to Raglan. The climb up Pirongia was harder than I had expected but a great experience.

We spent the night in the holiday park at Raglan. Some opted to sleep in the bus, while others put up tents or rented cabins. Dinner out in Raglan with Dad and Russell was a nice way to end a long day.

On Sunday we climbed back into the ‘sofa’ and travelled safely (thank you Keith!) southwards along a long, narrow and winding metal road to the start of our next walk. Some of the party had decided to take the day off to walk round the Raglan shops and cafes - no doubt a taxing experience! 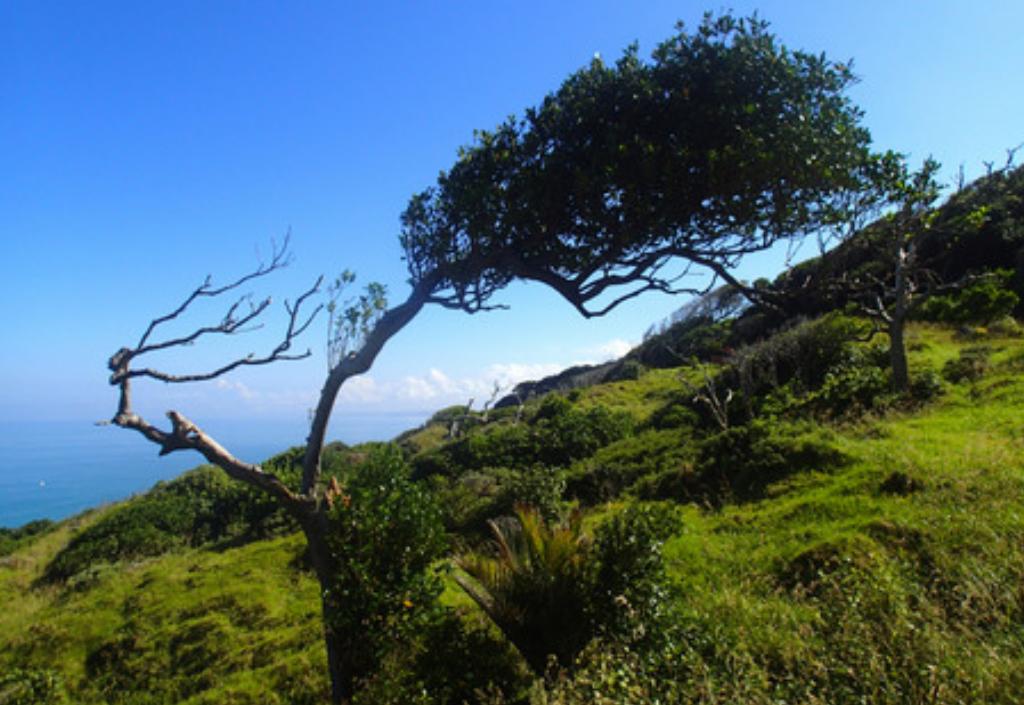 Once the rest of our group, now of ten, arrived at the beginning of the track, we began on a steep, hot, and seemingly never-ending walk up hill - first through bush, then farmland, then into the bush again. 160189 This, [took about an hour] personally, was the hardest part of the walk. The track now stayed in bush, so the harsh sun didn’t affect us as much. In many places however, the walk turned into a steep climb upwards over - and through - huge tangles of muddy tree roots that jutted out from the bank - our only aids the chains that had been hung there. This section had a distinctly dark and dingy feel (reminding me of Tolkien’s ‘Mirkwood’ lookout for elves!) very different from the hot and sunny hillside we had encountered a little while earlier. We did eventually reach the lookout, after about another 2 hours which provided stunning views of the valleys and bush around us, and further away, a look at Raglan township and harbour ( great place for a selfie I found !) 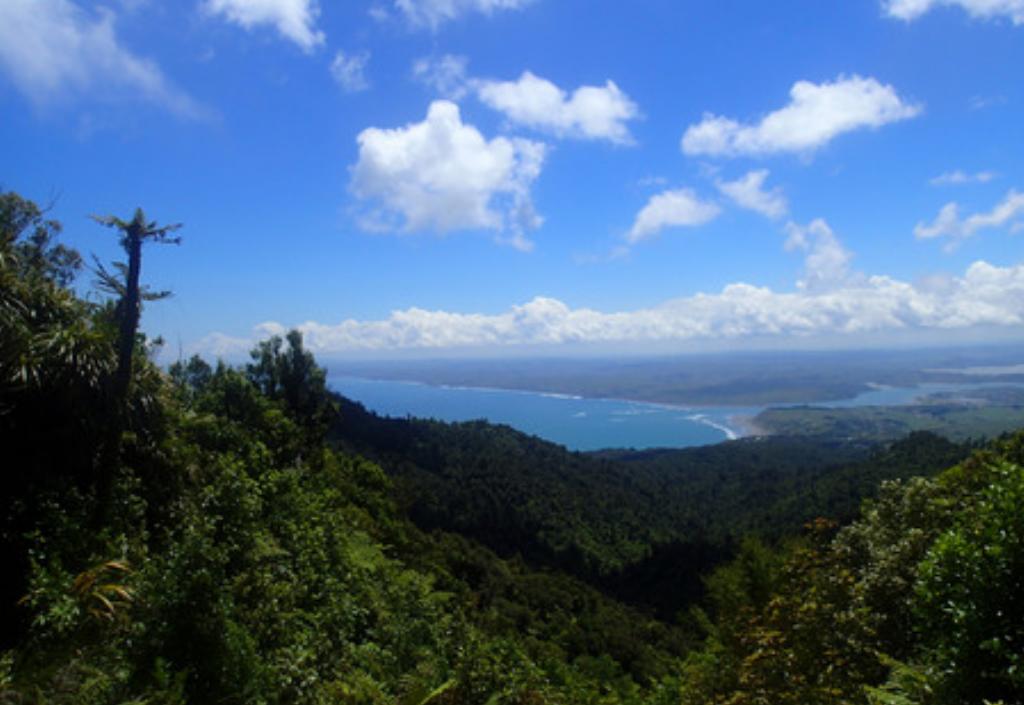 Some turned back after the lookout, and brought the bus round to eventually meet us on the other side of the mountain. For those of us that headed on up to the summit [756m], the track was generally easier, and mostly involved smaller root steps and picking our way around large patches of mud, until we arrived at the final summit. The views here were breath-taking, and the happiness on everyone’s faces was clear. We make an easy, if ankle-jarring descent through bush, then farmland, and arrived at the bus for our journey back to the club. The whole walk took about 6 hours.

I am very grateful to the ATC, and everybody on the tramp for this incredible experience. Although it was exhausting, I really enjoyed my two days, and I am inspired to take up tramping.