Weather: much better than forecast. Rain only at night and after we left Sunday. Saturday perfect day.

It was hard to judge how useful the possum operation has been, apart from the high uptake of striker baits. There was no indication of deceased possums anywhere. We will only know next month when we see if there has been possum interference with bait bags - the tell-tale sign of bags pulled right out of the stations.

People: strong team of 17. Four slept in the woolshed bedroom. For the first time a majority of people (11) arrived on Thursday with the remaining 6 on Friday. This meant we were away to a great start while the weather stayed good. Hazel, Stephen, Jane and Christine had other commitments later in the weekend and had to leave early, but we greatly appreciated them coming down early and putting in the work. Wallace, Tony and Hazel even got some work in on Thursday.

Thanks also to John M, Jennifer, Vicky, Greg and Sabine who offered to help but were told we had sufficient numbers this time. 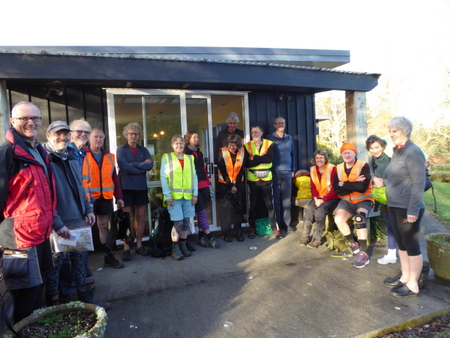 Food: ample, varied and delicious. Our specialist dessert provider Graeme was back in action and we were spoiled for choice with home baking and home grown citrus fruit. Jean laid on a large roast chicken dinner with tons of veges and a delicious soup.

Highlights: the wonderful good luck of Christine and Linda (on her first time with us) to hear and see several kokako for 20 minutes - 2 days in a row!

Wallace drove his vehicle to the Wildlife hut. One wonders what it had done to deserve that. Apparently coming down the slick bare patches was trickier than going up.

We were on our way home by 0830 Sunday, stopping for morning tea at The Nest in Pirongia where we met Colleen Grayling and others from Howick TC who also had a successful baiting weekend at Rangitoto Station, not too far from our Tunawaea area.

18-19 September is the DoC Kokako Specialist Group hui in Rotorua. Colleen and Wallace will attend and report back.

Great work by all this weekend - hope to see as many as possible for October 3/4-6. Book early with Liz, avoid disappointment!