After much jostling for places on the trip, the lucky few jostled for places in a full bus on Friday night. More traffic than usual being a long weekend, but that was soon behind us as we headed down to Rotorua to pick up Geoff, and then on through the Kaingaroa Forest, before skirting Murapara, and then on into the Whirinaki on the Lake Waikaremoana road. Soon after Te Whaiti the tarseal was replaced by shingle, and then the minor track that is Okahu Valley Rd appeared. That has a special feature of numerous deep pot holes, most of which Lee with great skill was able to avoid.

A cold night when we arrived at 12.30, but some hardy souls piled off the bus into their tents or bivvy bags making for a more comfortable night for those still in the bus (thanks guys!). In the morning after a deliberately set early alarm, it was useful, given all open ground was now a stunning white with a heavy frost, to compare the benefits of a tent in the open (very, very cold and icy) or in a more sheltered spot (very cold, less ice).

So the Medium party set off after the Fit party along the easy Moerangi mountain bike track, for an early morning tea at Skips Hut, and then an even earlier lunch hour 11 to 12 at Rogers Hut, with a chance for a brew up and a few patches of sun to warm us up - in the shade there was still a good frost, with cold temperatures. Kay sunned herself in a choice spot, Geoff spotted the nearby "WOPS" wasp nest, so then found a good use for a bucket of cold icy water. No, not on Kay .. on the wasp nest. A group of mountain bikers on the day trip Okahu Rd - River Rd passed us while we were here.

A good break, but needing to tramp to keep warm, we continued on the mountain bike track up the Moerangi valley. This was once a tramping track that used to cross and recross the stream - now it is a well graded and wide track further up the hillside, with some good views, but exploring every side valley so as to not lose much height. Bridges all the way, so no wet feet at all today. The first few people arrived in good time while there was sun on Moerangi Hut, but that soon went, so cooling down quickly.

Athol managed a good fire and others managed to undo his good work, but despite that the hut soon warmed up, making it a great place to be to relax, get warm, and have an early dinner. Mostly dark by 5.30. A cosy 9 bunk hut, but only 6 in use because of the tenting contingent. Later in the evening the weather changed - some cloud, but warmer, so generally a comfortable night wherever you were.

Another deliberately set early alarm the next morning to hit an 8.00 departure for the expected 7 to 7.5 hour day. The leader was caught out trying to leave his rubbish behind, so a black mark there (thought it was packed already - yeah right!) Time for a happy group photo in anticipation of another comfortable day.

Crossing a bridge near the hut there were whio calling in the river not far away. Then on up the well graded mountain bike track 250m onto the ridge and onwards. Much debate about an unmarked junction heading left in the expected direction and acceptable to the GPS readers, but Geoff had a good explore and found the real junction marked a little bit further down the main track.

Now a bit behind schedule as we headed down the hill into the Mangamate stream, on a real tramping track for the first time this weekend, with the occasional patches of treefall. Reached the junction at the stream over half an hour behind schedule. The route now went upstream more slowly, with many crossings, walking in the stream, and healthy shoulder high cutty grass patches to negotiate as carefully as could be. Lunch stop provided a chance to assess progress - once that, if not the lunch, was fully digested, a 5 minute departure notice was given - still 3.5 kms to the Mangamate Hut (the original hoped for lunch stop)

Which was duly reached after a steady but well graded climb just after 2 pm - one group in residence, another arriving soon after, and then news of another one on the way - that night was set to be a busy one there. But not for us - at 2.15 we left, passing a sign advising us that our destination (Central Whirinaki Hut) was 4.5 hours away. So time to up the pace a bit as we descended into the next valley, and then headed up in and around another stream in the direction of our final saddle for the day.

The direction was right, but the track obviously was incredibly devious because we missed where it started the final climb. So again a debate consulting GPS’s and maps and options for backtracking vs exploring. Back tracking was probably the best bet, but Geoff did the exploring and found the track half way up the hill, so after a short sharp climb we were back on track. The saddle was crossed soon after, and we descended into the next valley, continually crossing and recrossing the little stream as it wandered its way down the valley.

People getting a bit tired, but keen to push on and cover as much ground as possible before dark, so it was with great relief that we passed first the junction from Upper Whirinaki, and then onto the highway track from Plateau Rd at 4.40 - by which time it was fairly dark in the bush which is where we were all the time now. Only 2.5 darkish kms left to go, and with an easy track we were able to make the hut all together by 5.30 - 9.5 hours and 21.5 kms after our photo shoot at Moerangi Hut. A great day’s effort by all making us feel that, in spite of the easy day on Saturday, we really were on a Medium trip.

The Easy party was in residence with some others as well with a cosy fire warming the hut. A big hut, so room for all, whether that be in bunks, on the verandah or in tents in some great spots under the trees nearer the river. News on the radio of the fit party suffering from exploded knees was ominous, but for us there was a comfortable night and another easy day ahead with a 4-5 hours stroll on an easy track out to the bus.

So no early alarm (just the natural one of other people wanting to leave earlier than us), and a scheduled departure of 9.00. In the event there were a number of defections to the easy group who left a little earlier. But all was forgiven when we all reassembled for a very pleasant break together with a leisurely brew up in the sunshine at the large shelter at Verns Camp.

But we couldn’t stay forever, just in case the Fit party somewhere behind us caught us out. So on, first to the spectacular Whirinaki Falls lookout, and then after a while, joining up with the Mangamate stream, less than 1km from where we had joined it and headed upstream in it the day before. Not far now to the deep Te Whaiti Nui A Toi Canyon, crossed on a footbridge, before a short climb up to the carpark, and the waiting Big Blue. Even joined at this point by our last remaining defector (Graeme), so just this once we readmitted him to our group to give the Medium party the (consolation?) prize for being the first to leave the forest.

Did I mention the lovely variety of forest, the bird life, the little streams, the Whirinaki River as it grew from an amiable stream into a full river with rapids and the falls, the variety of good camp sites, the comfy huts, the great company, the friendly people we met, the superb winter weather - it was all there and more, making this a must do area for people of all abilities and interests. Exposed hillsides everywhere provided sobering evidence of the massive amount of ash and pumice, at times many metres thick, deposited by the Taupo eruptions. 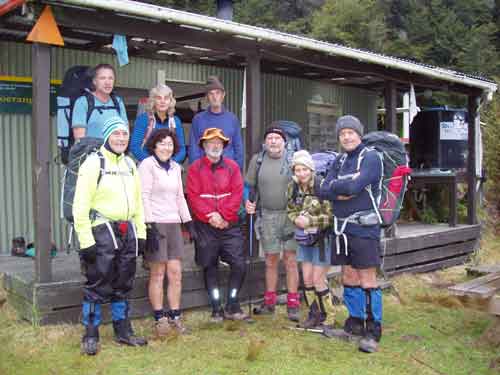 In the meantime the Easy party had a great weekend as well. On the frosty Saturday morning they drove the bus up Okahu Rd and back to Te Whaiti, picking up Garry, a local driver, from Whirinaki Farm Holidays. Then on past Minginui to the River Rd end of the Moerangi mountain bike track where their tramp started. Garry took the bus back to his place for safe keeping (and then successful return on Monday afternoon). A pleasant tramp up the Whirinaki Valley with a sunny lunch break at the Verns Camp shelter, before arriving in time to claim their bunks for an almost full Central Whirinaki hut.

The next day was the time to tramp in to the pumice caves formed by the Taupo eruptions - with burnt wood in the sides of the cave as evidence of the heat generated at the time of the eruption. A daylight return to the hut to wait eagerly?, anxiously?, or was it we don’t give a toss for the arrival of the Medium party. We will never know, but at least the hut was warm when we arrived.

And a relaxed start the next day, temporarily stealing some of the medium party on the walk back to the bus.- to be fair, it was a bit frosty again, and once ready, people were keen to be on their way, at least as far as the sunny Verns Camp shelter

Verns Camp Shelter The Easy party consisted of Brian Alexander (leader), Carol McBride (new to ATC - a good trip choice Carol), Liz Eden, Peter Thompson (driver), and Philippa Ryan (new to ATC also).
The second photo is inside the shelter at Verns Camp with some light refreshments in order... hastening to add that the bottles are nothing to do with us !