And Then There Were Five

It’s three weeks before the Labour Weekend trip to the Urutawa Conservation Area near Opotiki and the Easy party is over-subscribed. Coming back from five weeks’ holiday, I discover my house-sitter had accepted 10 names. So when Athol phones, I try to turn him away. Until I find out he’s a driver - whoops! So we’re up to 11.
One week to go. After passing on intel about the rough state of the tracks, two people withdraw. Down to nine.
And one person (who was Pat?) proves to be non-existent. Down to eight.
It’s now Labour Weekend and we’re at the garage on Friday night. One person bails to the Medium party. Down to seven. 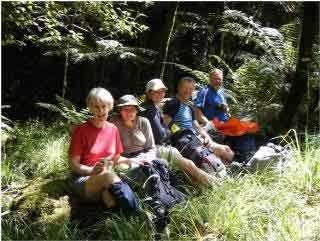 Saturday morning and we’re off.
One person soon returns back to the truck. Down to six.
Sunday morning and still the attrition continues. One person is helicoptered out. And then there were five.

Is that a record, ‘losing’ six party members in a week? And what’s this with the helicopter, you ask? Read on...

On a beautiful Saturday morning the Easy party left the Manganuku campsite in the Waioeka Gorge and headed in to Tokenui Hut, taking our time as it was supposedly only 3-4 hours away. We actually managed to clock in at 6½ hours, though that did include a 45-minute lunch-break basking in the sun by the Little Manganuku Stream.
Things went pear-shaped about 2.30pm when Liz took a tumble in the Tokenui Stream, acquiring in the process a torn ligament in her knee. After much pouring of cold water, she hobbled to the hut (which luckily was close by) and it was quickly ascertained that she’d be unable to either carry on or return to the truck, the travel all being in slippery-rocked rivers or over nasty little saddles strewn with windfall.
Out came the mountain radio, and we began broadcasting.
Easy party (on Saturday morning): Liz, Sue, Lydia, Craig, Athol The first human contact was our planned ATC radio sched at 6.50pm. The Fit party was perched on the track above a gorge, not having reached their destination of Te Waiti Hut - and they warned us not to continue on (they were doing in one day what we were scheduled to do in two). There was much height exposure, deep gorges, waterfalls, slips, taniwhas... they recommended we retrace our steps back to the truck. Not much convincing needed there. 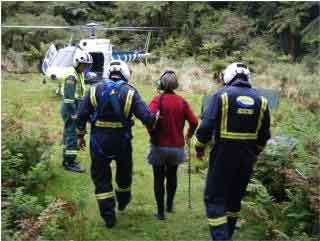 At 7.50pm the Medium party made contact after their 11½-hour marathon, and at 8.00pm the Mountain Radio Service (MRS) sched out of JG base in Wellington kicked in. After JG’s regular contact calls, it was our turn. Transmitting at 100 watts, we could hear them clearly, but with our radio at a puny 1 watt and lightning in the Wellington skies, we had a few communication issues until a listener-in in the Kaimanawas started relaying for us. Very efficiently, the MRS co-ordinated with the police, Search and Rescue and St Johns. The end result was that at 9.15pm we were informed that a helicopter would be dispatched out of Rotorua early the next morning, and Craig could finally stop holding up the post with the aerial.

7.30 and the helicopter lands at the hut, Liz is strapped into the stretcher seat and off she flies into the yonder with three very nice men, supposedly for Whakatane Hospital. The Easy party retraces its steps to the Manganuku campsite, knocking an hour off our previous time and with the bonus of seeing two blue ducks.
On Monday we drove around to the Boulders road-end where we were supposed to come out to pick up the other two parties, who were supposed to come out where we did. Lee had his car, and volunteered to drive Liz home. She wasn’t where she was supposed to be either, and was tracked down in Tauranga.