The journey down was relaxing and lulled everyone to sleep. It was good to wake up and see a myriad of stars where there had previously been blue sky. A few people opted out of the bus and chose to set up tents on the small areas of verge surrounding the bus. The bus people were happy to have the extra space and the tent people were happy to have a small square to call their own. Soon slumber prevailed and peace reigned. The next day was beautiful and with no sense of urgency there was a relaxed atmosphere. At around 7.30am everyone was ready to go and we started on our merry way. 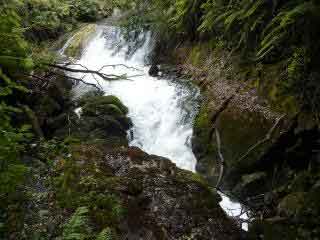 The terrain was quite even and was bearable with the packs everyone was carrying. We had a slight climb up onto a ridge and then walked along this for the rest of the morning. After a discussion, it was decided to wait for lunch until we reached the lake. The lake, when viewed from the bank, looked like a tropical island. There were two well positioned palm trees and incredibly white sand. It was quite windy, but the view was enough to offset the weather.

It was another few hours to the camp site and we set off again with a clear goal in view. There were some beautiful mossy areas and it was pleasant to walk alongside the lake. Eventually, we came across the camp site and people began choosing good spots to lay their heads. It seemed rude not to have a swim and all sorts of bathing attire came out, from the most robust to the more revealing. It is always good to observe the scenery while swimming, as you never know what you might have the chance to see.

A natural social area was formed after dinner and a lively game of charades developed after some prompting from a very lively Mike. Jan and Mike were so in sync, an observer would think they had a secret code! It was a pleasant way to spend that time - just a bit too early to hit the sack, but no-one could be bothered doing anything more energetic.

(Photo: Jean Barton) The next day was a shorter walk. The highlight for me was the magnificent swimming hole and Hideo’s fabulous rope-swinging abilities. The waterfalls were mighty and impressive. I keep remembering the sheer force of water being forced through a tiny hole and feel thankful that I will have this scene in my memory to reflect on whenever I want. 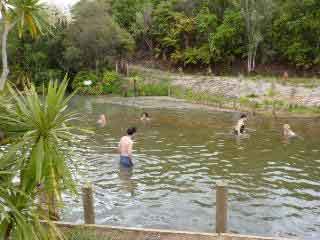 I was glad that everyone was keen to swim and enjoy the beautiful surroundings as well as the tramping. We made a detour at a very natural hot springs, the best I have ever been to. I particularly love hot pools, so it is another I can tick off my list.
Geoff allowed us to visit his home and we were given a tour and an extremely eloquent description of his trees, which was most informative. 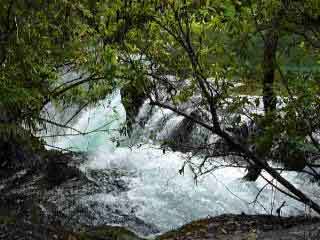 Thank you, Kay, for creating such a fabulous weekend. I knew you would, but you surpassed expectations and you deserve big thanks for your achievements.