Streams and Blackberries in the Northern Ureweras

This trip set out to explore a different area of the Northern Ureweras where the club has not been for a long time. Access is via the Waimana Valley, inland from SH2 between Whakatane and Opotiki. There is a good network of tracks, streams, and huts in the area to the east of the valley end, so the biggest planning challenge was to map out a range of routes suitable for the Fit, Medium, and Easy parties, using the information from the DOC website.

An almost full bus left as usual on the Friday evening, and after a slow exit from Auckland, it was a routine drive down thr 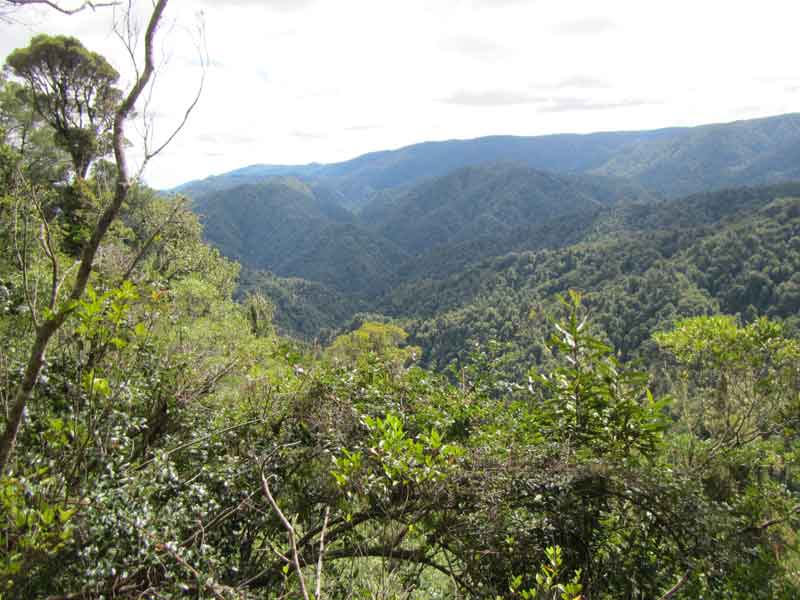 ough Matamata and Tauranga, and then eastwards, before turning up the Waimana Valley heading for the 8 Acres / Te Pakau DOC campsite, around 35 kms off the main road. Local Maori cemeteries were made memorable at night (for the few people awake) with little lights on the graves, and there were a large number of horses along the valley road too, mostly unconcerned by the bus travelling by. Some perilous drops for some of the narrower sections … which you don’t notice at night, but are really obvious on the way out on Sunday – as always thanks a heap to our drivers (Keith and Carol) for getting us there and back safely.

A hitch near the road end was a tree leaning over the road with branches threatening to damage the bus, so out came the saw, and Simon set to on the branches, first hanging on to the front of the cab, and eventually sitting on top of the cab. It was Simon’s first weekend trip with us, so what better initiation at 1 am on the Saturday morning – well done Simon ! As it turned out we could have stayed more conveniently at the other DOC campsite just before Ogilvies Bridge, but the bus still had to go to the road end on Sunday.

And so, early enough on Saturday, the three parties set off. The Easy party achieved their target destination for the day, although reversing their route, arriving in good time at the large Koaunui Hut via the Ogilivies and Otamatuna Ridges (picture from ridge). A pleasant evening on the side of the Waiti Stream watching whio / blue ducks who were unconcerned by their observers. Sunday was an enjoyable trip down the Waiti Stream, with a small hill to go over before returning to  the bus, and then driving to the road end to pick up the other parties.

The Medium party had the target of the Otane Hut via the same ridges and the Otapukawa Hut. In the event they had a reasonably long day before reaching Otapukawa Stream, and the nearby hut, where they stayed for the night. The next day saw a leisurely walk down the stream to the main valley, being inexplicably delayed by a good supply of delicious ripe blackberries – the only time in the year where trampers enjoy blackberries. Back at the 8 Acres campsite gave everyone the opportunity for a relaxing swim in the river, waiting for the bus and the remaining trampers to arrive.

On the Saturday, the Fit party

had the target of the Te Pua Hut, via Otapukawa and Otane Huts, also via the Ogilivies and Otamatuna Ridges. Travelling ahead of the Medium party, it was still mid afternoon before reaching Otapukawa Hut, so most opted to stay there, and enjoy the rest of the day in and around the stream. To be joined a while later by the Medium party.

All along the ridge tracks there was evidence of an extensive pest control operation, with a wide variety of traps. Further along the Otamatuna Ridge the possum tramps part way up the trees were well stocked with recently caught dead possums – waiting to be cleared in a few days by volunteers from the local maraes.

Carol, Caroline and Tony decided to continue on from Otapukawa Hut for another 3-4 hours, reaching Otane Hut just as the night arrived around 8.30 pm. A very delightful and picturesque, but slow section travelling up to the headwaters of the Te Wehiwehi Stream (picture), with boulders, deep pools, slippery rocks, ongaonga and an infrequently marked route leading up a side stream and over a saddle into the Tawawharara Stream. Navigation was more difficult than expected, but the track right at the saddle end of the side stream was marked well enough once we found it.

So a 12 hour tramp saw us gratefully reach the well looked after hut, so just time for food, and a welcome rest, disturbed only by the possums playing noisiliy in the night. The next day was downstream, first in the Tawawharara Stream and then Otane Stream. Superb streams (picture) and mostly straightforward with only a few obstacles  - as would be expected Carol had no issues, Caroline traversed these with elegance, and me ? … well I did get over, but I don’t do elegance ! Guess who told me that ! 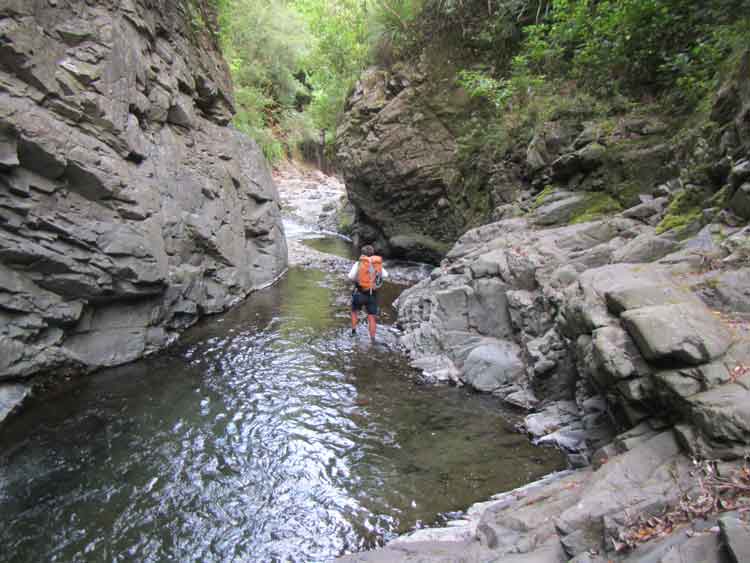 After our morning tea stop, the Otane valley broadened out and travel became faster, so that we reached the main valley in time to take a side trip to the sunny Te Pourewa Hut for lunch – in spite of also getting delayed by ripe blackberries along the way. And so we continued on to the road end, arriving at 8 Acres campsite to meet up with the Medium and other Fit party members, with a short wait for the bus to arrive.

Pointers for future trips in the area