This promised to be an interesting day out in the old mining area of Waiteakauri, near Waihi. The club has not been in this particular area on a Sunday trip before (last visited by the Vets in 2000), so an offer by Tom Carr, president of the Katikati Tramping Club, to be our guide for the day was very welcome. On the day, Big Blue left Auckland with 27 on board, and were joined by Tom, also Ian and Anna, at Waikino. The first part of the walk was up a vehicle track that was once the a tram road from Waitekauri through to Paeroa, and is still classified as a public road. However it is still prudent to check with the local farmer before using it, because it passes through a working farm, and has been used recently for forestry operations.

It soon leaves the farmland and continues on a gentle gradient into regrowth bush - with side tracks occurring regularly - so really beneficial to have a guide to help us keep on the correct track. 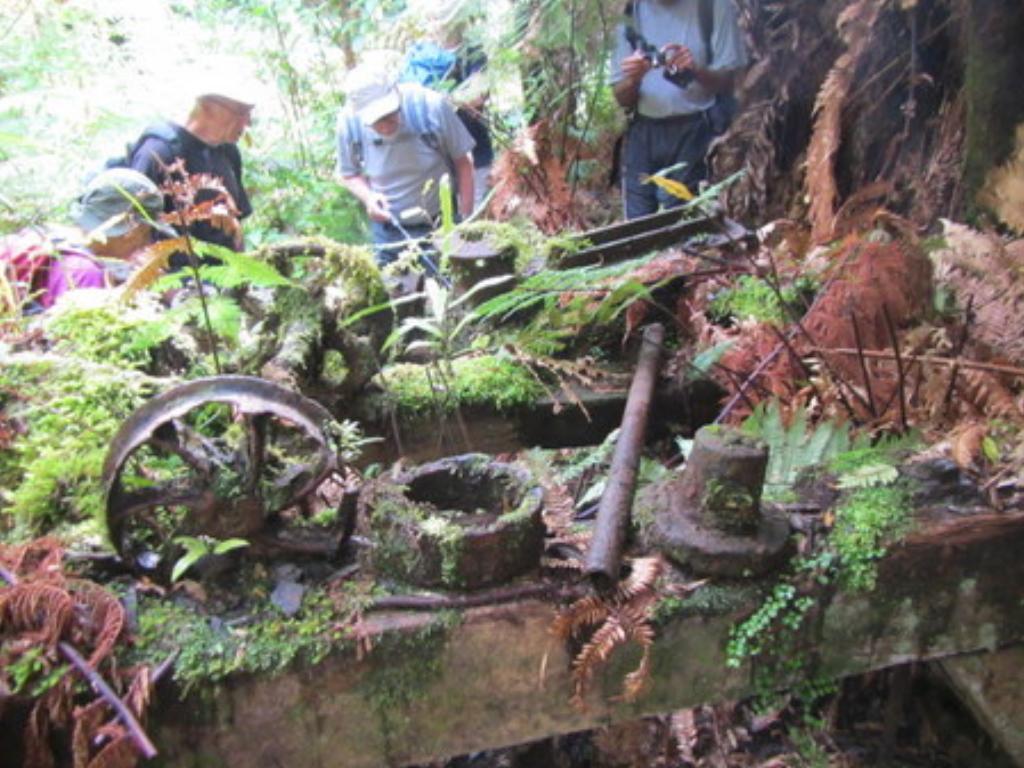 Our first feature point for the day involved turning off the main track, and following a tape marked foot track steeply down the hill to the location of the old Maorilands battery on either side of the small Maori stream. Tom had brought some pictures and information of the site when it was operational - as one would expect it is hard now to see where the various buildings were, and makes you wonder how they ever managed to bring the battery equipment and building materials onto the site - such a lot of very hard work required before it was operational. Over its working life, that battery successfully extracting around 7,400 ounces of gold..

Back up to the main track and we continued on, with some of the group sloshing their way through an old tramway tunnel, while the dry boot brigade followed an alternate track over the top. Further on we came to a more open clearing / track junction amongst some very tall pine trees where we stopped for lunch. Nearby was an old wild and straggly tree - possibly another species of pine - with epiphytes on many branches. Apparently it reminded people of a similar tree in the Avatar movie. 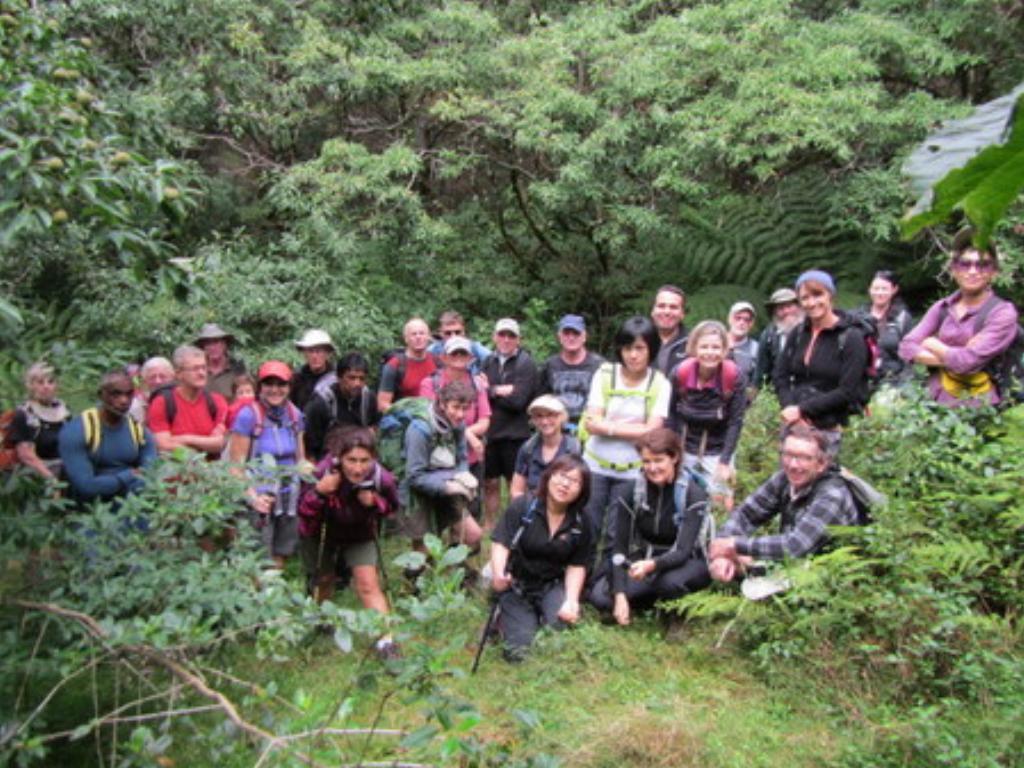 Soon after lunch we came to a large grove of strawberry trees covered in mostly unripe green fruit that were starting to ripen and turn red. When ripe, these are a big favourite with the local tuis who can become intoxicated on the fruit when it has the opportunity to ferment !

Group photo with strawberry trees behind.

The tracks continued to branch and wander, but no, our guide Tom did not suddenly vanish on us, with the sound of wild laughter echoing in the distance. The whole area was worked over very thoroughly in its mining days as people explored for locations of ore suitable for transporting to the batteries, as well as for determining suitable water sources. So a real mix of introduced vegetation and regenerating native bush, with the main track network being in a good state, although with no signage, so local knowledge - or lots of time and careful navigation - is essential. The tracks are not shown on the topo maps.

The next point of interest was the site of the old Jubilee battery - again down a steep tape marked track down to the battery site. Some remains of the battery, but amazingly enough in recent times key parts of the battery equipment were extracted with great difficulty and transferred to an historical museum in Tauranga. In contrast to the Maorilands battery, the Jubilee battery was a financial disaster as they struggled with breakdowns and an erratic water supply.

On our way back down the hill some of us followed a side track to find some of the more obvious mine shafts and drives - apparently they are everywhere in the hills if you know where to look, To be explored at your own risk, as there are no signs and are not deliberately blocked off.

From there it was a short walk down the hill and back on the same track through the farm to the bus.

A big thankyou to Tom Carr for volunteering his time for the day on a most interesting trip. And also to Suresh Nanu for being our driver to / from Auckland. (Leader and scribe - Tony Walton)