Time Passing in the Ureweras

From the outset our Fit trip looked set to be one of 3 long days. Nevertheless 5 hardy souls signed up to follow Garry into the great Urewera unknown. Some big concerns as to just where the bus would get to on Friday night, as the driver variation process took right up to the eleventh hour plus some just to get the two drivers approved for the drive through to the desired starting point. It was a quick departure from Auckland, and the drivers did a great job to get us to the road turnoff for the Maungapohatu Settlement in the early hours of Saturday morning.

I tried Malcolm’s trick of sleeping under the bus - which worked because of a still night, but nevertheless a tad cold - but lots of space and far enough away from some of the noisier sleepers above me. Not sure if the new Big Blue will have enough room underneath for that in future though!

The bus took us a short distance along the road in the morning, and then we were on our own - meaning another 12 kms along the road to a good turning space before the locked gate and Keep Out signs, where we then took the Six Foot Track off into the delightful bush with pretty little side streams at regular intervals. 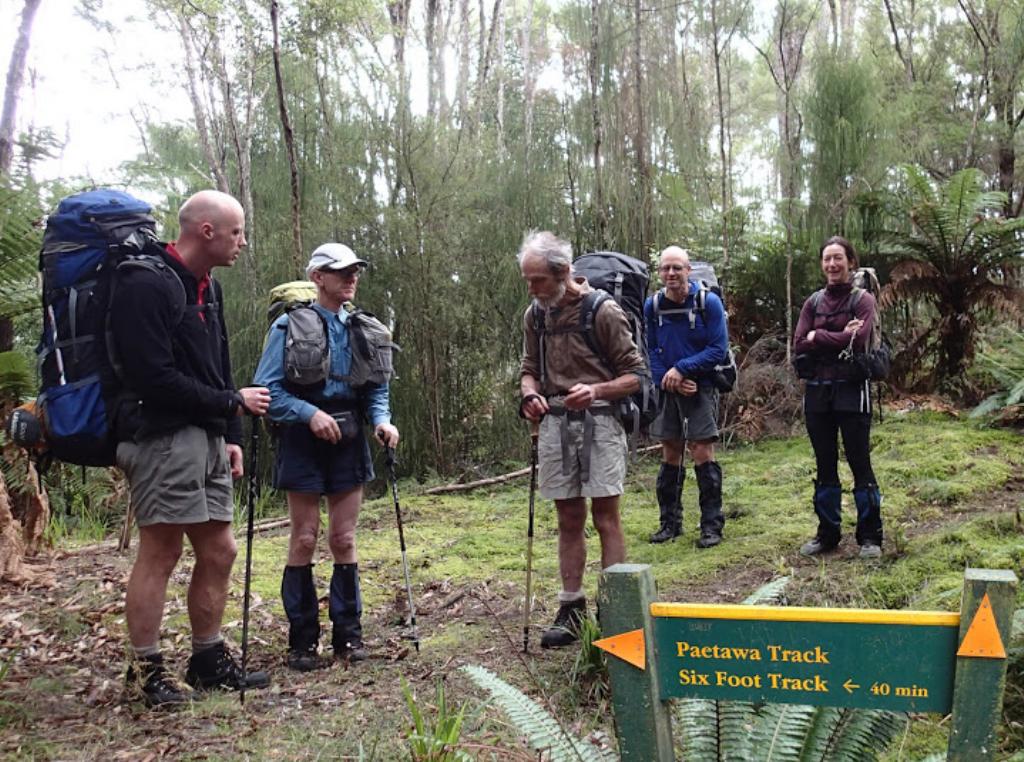 Good enough rate of progress as the track was in good order, but our lunch spot had us well short of where our route plan would have had us - our arrival time of around 3pm at the Makomako Hut with another 5 hrs or so to the intended hut was a foregone conclusion - a great place to stop for the night and enjoy our special spot situated in a large clearing - while there was still daylight to appreciate it. Geoff true to form was soon onto the firewood replenishment task, and despite the usual hassles of coaxing a hut burner into life, we had a nice warm hut in good time.

The next day was set to be quite achievable as the Paetawa track provided the opportunity to pick up the original intended track. Before reaching it we were in good hands continuing on the Six Foot Track - named because it was originally cut as a six foot wide track - at one point it must have provided a good through route to the Bay of Plenty via the Tauranga / Waimana River.

Because we were ahead of time, it was decided to wander off track and do a (cold) stream then bush bash on our way up to the Taurawharona Hut, where the Medium party had spent the previous night - along with two hunters inside - and a pig hanging from the porch rafters - it must have been a great adventure on a quick night-time comfort stop ! Anyway, we were there for our relaxed lunch stop on another sunny winter’s day - plenty of time ....

Heading back south down the track now we were puzzled not to find the expected Paetawa track turnoff that we had bypassed earlier ... until it turned up a few hundred meters further down the track ... just proves again that maps are not always right ... or tracks get moved ..

Continuing on we were starting to get a sense of time passing by, which was not helped by the lack of helpful signage at a point where we were touching on vehicle tracks not far from Maungapohatu - but collective wisdom and map reading skills soon had us on the steady climb up onto a SW ridge working its way towards a 750m saddle ... time still passing and getting to late afternoon ... in the middle of winter.

From the saddle a good track took us on down to the Waiawa Stream with the hut now less than 2 kms away ... time now for the head torches to be found as the night time rolled in. Fortunately there were good markers and foot tracks to take us to the hut, where we arrived in complete darkness. Two hunters in residence, so 3 of us slept in the hut and 3 chose to camp nearby. 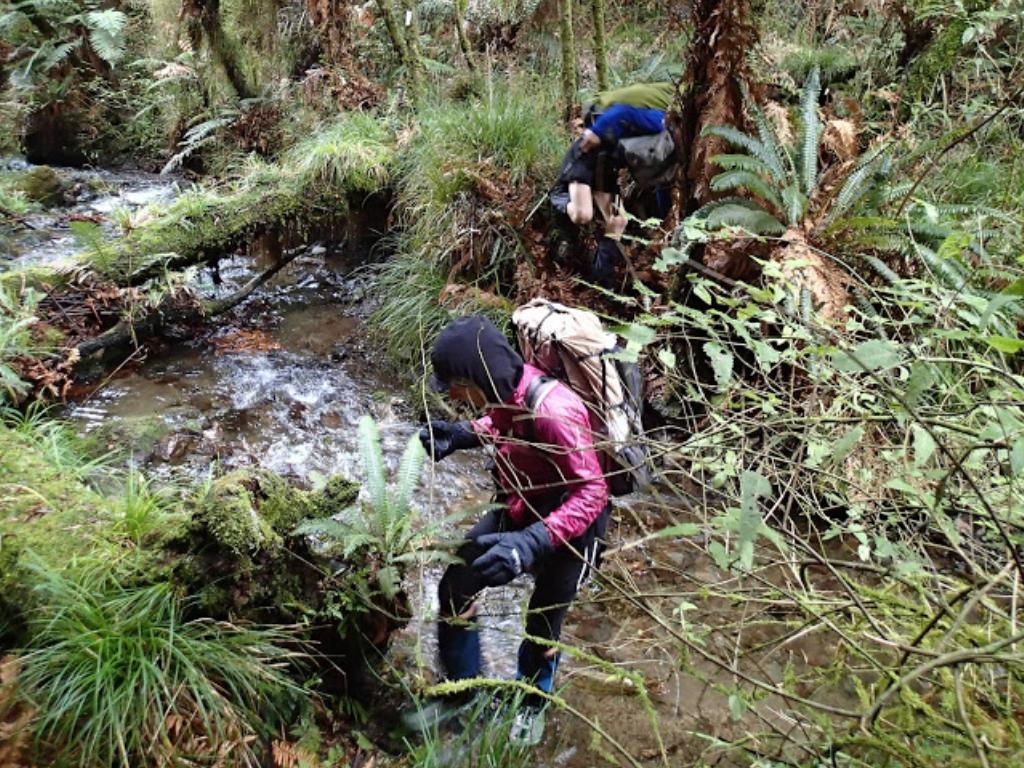 On paper, the next day looked viable given the tracks we had been on already ... but the reality was quite different. Following upstream we did find a DOC track sign, and then permolat markers, at times ... but they definitely didn’t ascend that ridge where the map said it should. Needless to say we played with that ridge for some time, until we ended up on top of it where the map said the track was ... but there was none ... and time was passing again ... and at the current rate of progress we might get out by about Wednesday. Sensible decision taken ... back down the ridge, downstream, and lunch stop back at Waiawa Hut.

Now only around 3 hours from SH38, but concerns all round as to how to communicate with the other parties given we were now finishing at a non intended location. Finally the day provided us our first few occasional showers for the weekend - but barring our concerns about transport, it was a pleasant stream and saddle and bush walk out to the road where we arrived around 3.30 pm.

We made a great decision to send Kathy off in a passing car to get to the road end up from Ruatahuna where the bus was - she did reach the bus in good time, where the Easy party was already in residence waiting for the Medium party - who as sometimes happens, had a harder weekend than us in the Fit Party. Meanwhile we continued trying to contact the bus via the radio, but without any luck. More time passing - drizzly, windy, cooling, no news, no bus, will we be spending the night here in our tents ? 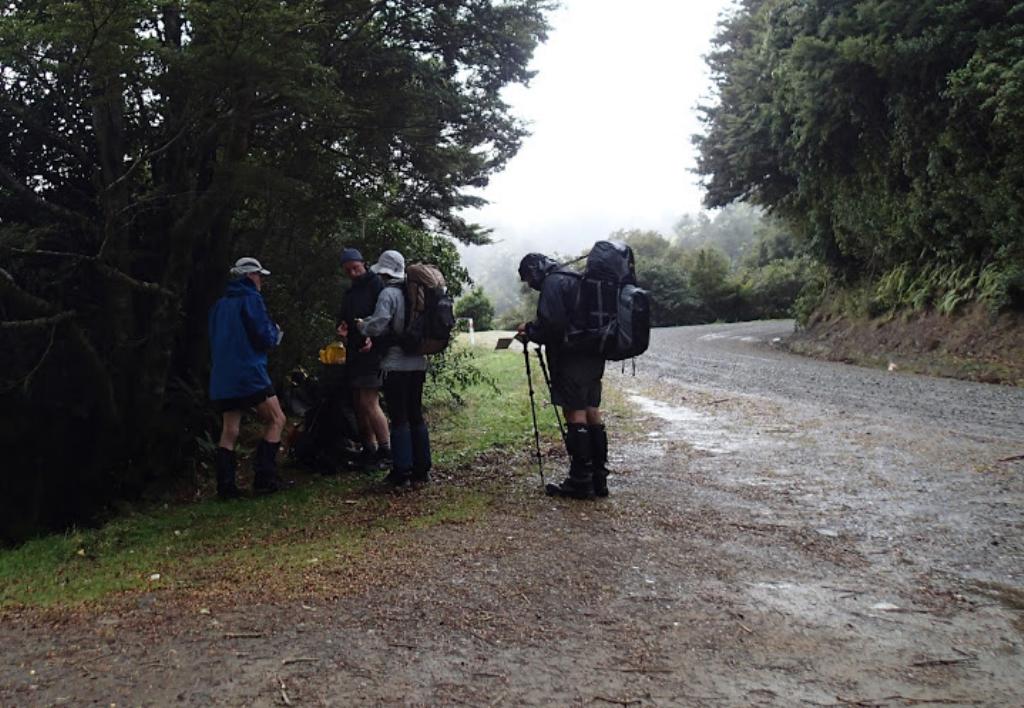 BUT such great relief when around 5.30 or so the bus did turn up and after getting changed into dry gear, the bus set off on the long journey back home - arriving back at Sandringham Rd sometime after 1.30 am the next morning.

This was the last big adventure for Big Blue senior and it served us well as it had done so many times in the past. Much credit also to our two drivers - Peter Thompson and Larry Beard.