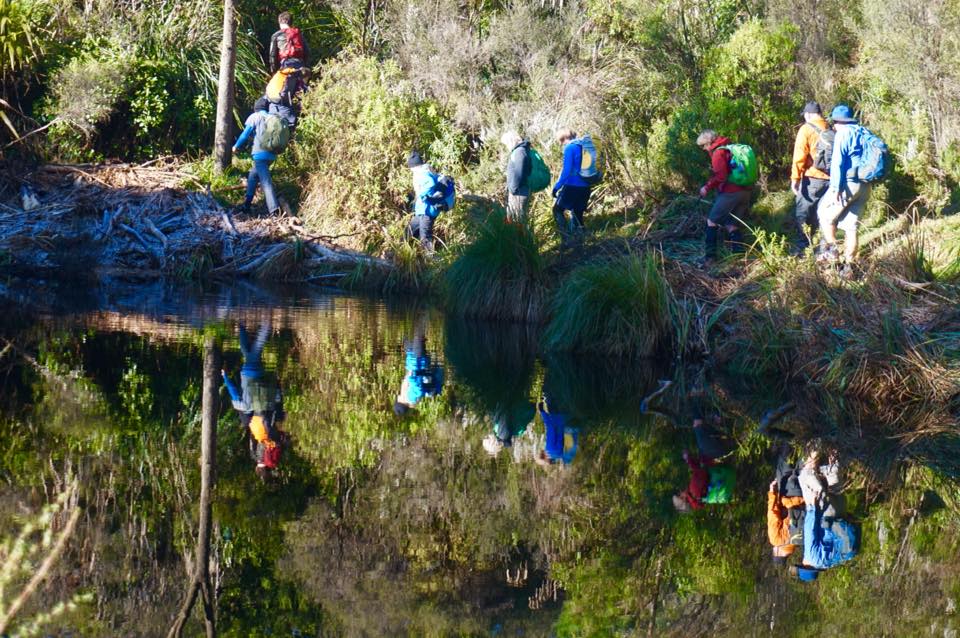 Question: After weeks of relentless wet weather, would there be many starters for a club trip to the Mamakus in the depths of mid-winter? Answer - yes! and then some.

The bus filled to its 21 sleeper-seat capacity well in advance, which led to a further nine opting for private transport. And what with another 10 bodies from Western Springs College travelling in convoy with us in a van, the total trip count was a very healthy 40. We also had ages ranging from 12 all the way through to 82, a very impressive 70 year spread.

Next question: Where would we all sleep? But there was to be no shivering and snivvering into our cocoa at an icebox DOC hut on this trip, nor snuggling into our sleeping-bags and donning all our woollies to keep warm at the first sign of nightfall. We were instead booked in to Ngatahoa Lodge, a superb outdoor-ed facility with a toasty log burner in the lounge, underfloor heating in the bunkrooms, piping hot water in the showers ... yep, a real Spiv Trip this one. Niiiiice.

On Saturday morning we split into our three groups. Mine was the Mediums, psychics and clairvoyants, a grand total of 19 including the eight WSC students and their two parent helpers. With brilliant blue skies above and a white winter wonderland below we enthusiastically set off. A hard frost had transformed the open spaces into a gorgeous feast for the eyes and cameras clicked crazily as we crossed the swing-bridge and set off down the track.

After a couple of pleasant flat-track hours we came to our first river crossing. Deepish at first, then silvery shallow, but calm and no problems. It wasn’t as straight-forward at the second crossing however, with it being deeper, swifter and with slippery boulders lurking hungrily under the surface. With an impromptu lesson in linking-up and a terrific team effort from the ATC pro’s, we got everyone in our party across with no wet shorts. (But I have no doubt that the WSC students will embellish the experience to their friends and family, to include raging torrents, icebergs and taniwhas).

Lunch duly followed at the Te Rere...... waterfall where all three groups merged, a picture perfect cascade replete with an azure sky and a double rainbow for our clicking pleasure. Then it was up the ladder, and at the next track junction the WSC contingent peeled off, with the remainder of the Mediums fruitlessly forging on looking for a mythical second waterfall. We did however stumble across a fine specimen of a frozen blue frog which was cause for much debate on whether it may or may not come back to life when thawed (a la hibernating toads in the UK). Making the most of the beautiful day, we took our time ambling back to the lodge, arriving middish-afternoon.

After dinner - ranging from gourmet to freeze-dried for the die-hards - the hardy ones rugged up and went outside into the clear crisp night to do the Confidence Walk, hunt down glow-worms and trout, and play Murder In The Dark. (I wasn’t invited, so don’t quite know what that entailed, but it did sound fun).

On Sunday some of the WSC students deserted Team Medium for Team Cruise and Team Rocket (just as well I’d only pencilled them in; I could rub them out and pretend I didn’t lose anyone), while the rest of us trotted off again into another crunchy frosty landscape. Performing a figure eight, we visited the pretty Ngatatoa Falls, came back to the lodge, and then did a circuit of the Long Loop and swimming holes. Such clear water, a really gorgeous spot, but no one was brave enough for what would have been a very ‘invigorating’ dip. We were back at the lodge for lunch and clean up, and then homeward bound at a very respectable hour.

Final Question: Was this or was this not a Magic Moment in the Mamakus? Everyone was in agreement - Yes! The weather wasn’t too shabby either, which helped terrifically in the success of the weekend. Thanks Team, it was fun.