A hurried rearrangement of our planned Queens Birthday Weekend trip was required because of road closures because of slips. The original plan was for routes between Horomanga and Ruatahuna - our substitute plan was to go into the Northern Ureweras from Matahi Valley Road - one of those very long valleys with little settlements and horses that are free to wander.

Friday night was spent in or near the bus at the Te Pakau / Eight Acres Campsite 2 kms from the official end of the road. Our group left promptly the next morning, with easy going up the Tauranga River valley to Tawhana (2.5 hrs). A swing bridge and an unexpected track heading back on the side of the hill distracted us for a bit, then we continued on into the Tauranga riverbed for our next leg through to Te Pua Hut (less than 2 hours). Two whio were casually enjoying the river just around the corner from Tawhana.

Many river crossings, but the river was down, so we arrived at the hut ahead of schedule for a welcome lunch break. Travel then continued up crisscrossing the stream, until a marked track just below a suspected gorge took us onto a sidling track - confusing because of multiple coloured markers, intermittent markers, and occasional changes of direction. But overall, a lot slower than in the riverbed. 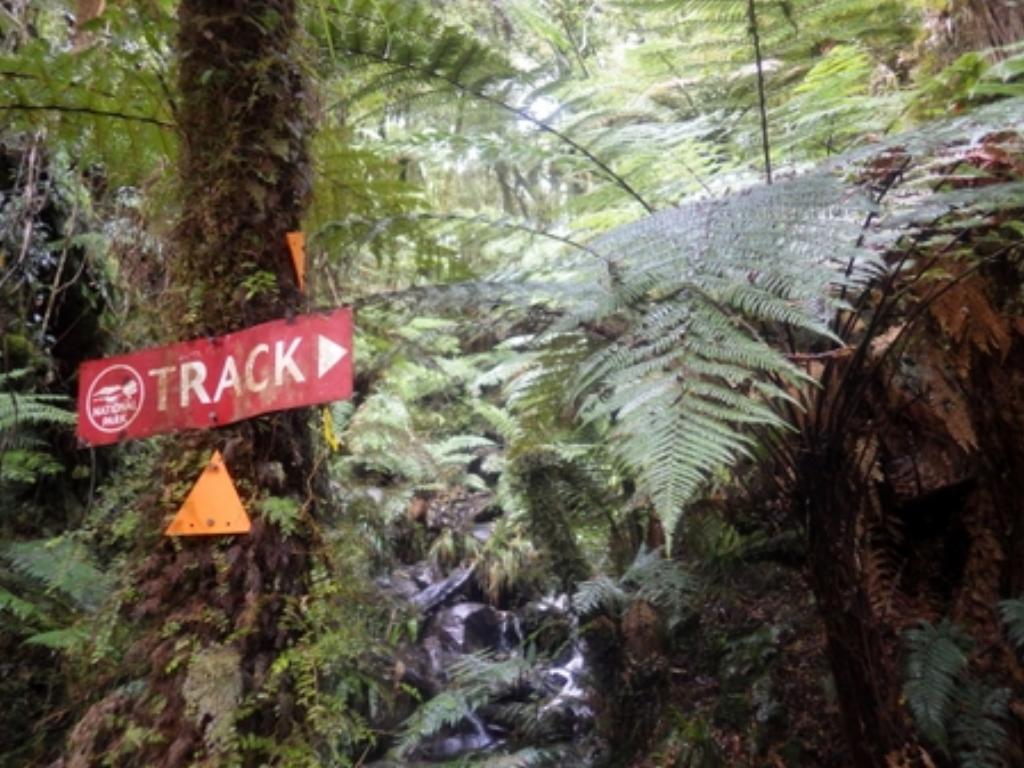 At 3 pm, with a lot of unknown bush track ahead of us and mid winter daylight conditions the call was made to forego our intended destination of Mangatoatoa Hut and return to Te Pua Hut, where we duly arrived at 5.30 as dusk was well underway (dark in the bush). A cosy enough hut, with a lot of gear left by previous inhabitants - the only real complaint was the dripping perspex above my bunk (just from the dew / condensation on the roof), requiring hiding underneath a sleeping mat for the rest of the night in lieu of doing some serious rearranging of my sleeping arrangements in the middle of the night !

Next day’s destination then became the mostly direct route over the Kairaka Range, crossing over the Six Foot Track and then on to Te Panaa Hut. A good climb, some superb large trees, lush vegetation at times. Missed the track going downstream towards the hut, so a mad (in more ways than one) scramble up a hillside to hit the track south of the hut.

Already visiting the hut were a hunter and 2 teenage boys on horseback with several only too friendly but very healthy looking dogs. Margaret almost lost her lunch to one of them - thanks to Lynda for being her second pair of eyes. They moved on soon after, leaving the hut and very large clearing to us.

In the afternoon, three of us went up along the ridge track towards Taurawharona Hut as far as the point above Te Motiwha Saddle, with Margaret and me especially clearing windfall off the track as we went. Two hours there, 1 hour 15 minutes back, so expecting the same all the way through, suspecting that hut to hut this could be done easily enough with an overnight pack in 4 hours. (Noted for next time ...). An interesting track, in that at points it was cut deeply into the hillside but only for one person width, maintaining an easier gradient, suspected because it was constructed to bridle track standard (and that was where the horse riders had been before us that afternoon). 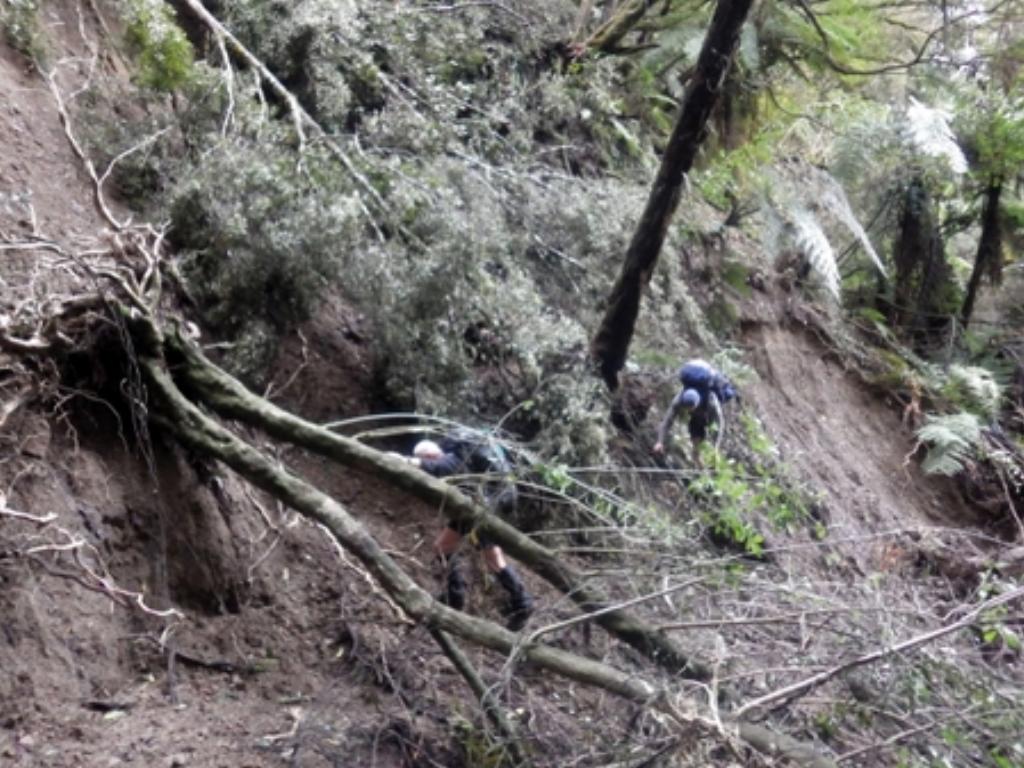 The next day the party split - the more relaxed crew taking the hunter’s recommendation to follow the Tawhana stream down to Tawhana (easy going, following horse trail - 1 hour), and the adventurous crew wanting to find out how bad the slips on the Six Foot Track were (a really serious slip near the end, causing the party to drop down to the stream at that point - 2.5 hours to Tawhana) 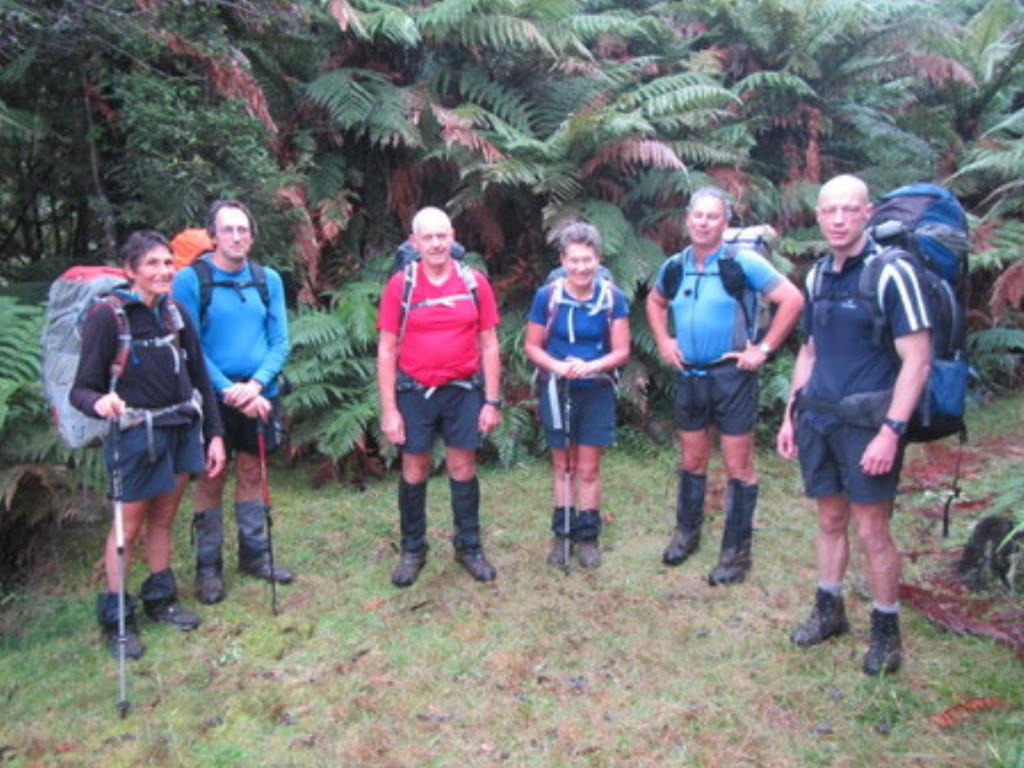 So back to easy walking territory, with time for a side trip to Te Pourewa Hut, on the other side of the Tauranga Rover - David’s party had gone that way on Saturday. Returning to the bus, some of David’s party were at the bus (road walk + lift), some were walking down the road, and some had stayed put at the intended meeting point. Gathered up Athol’s party as well, and then a stop in Ohope for dinner on the way home.