After cancellations due to illness and weather the Medium party (David’s) was down to 4 and the Medium fit (Geoff’s) down to 3 so it was decided to amalgamate the two groups and do the track allocated to the medium group. The tramp was undertaken at more like a medium fit pace. 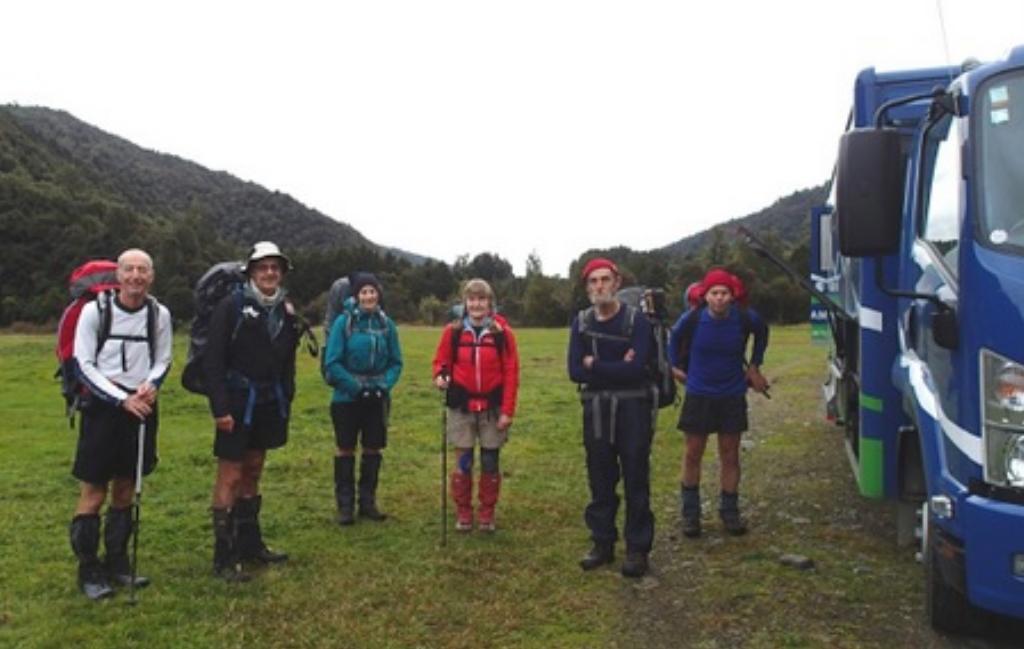 The bus arrived at Te Pakau (Eight Acre) campsite about 1.15 am on Saturday morning. At 8 am our group of trampers (some sleep deprived) headed off up the Tauranga River. After an hour or so a couple of pig dogs investigated us, decided we weren’t worth bailing up and trotted off. Shortly afterwards we spotted a couple of hunters with two horses quietly making their way through the bush but off track. 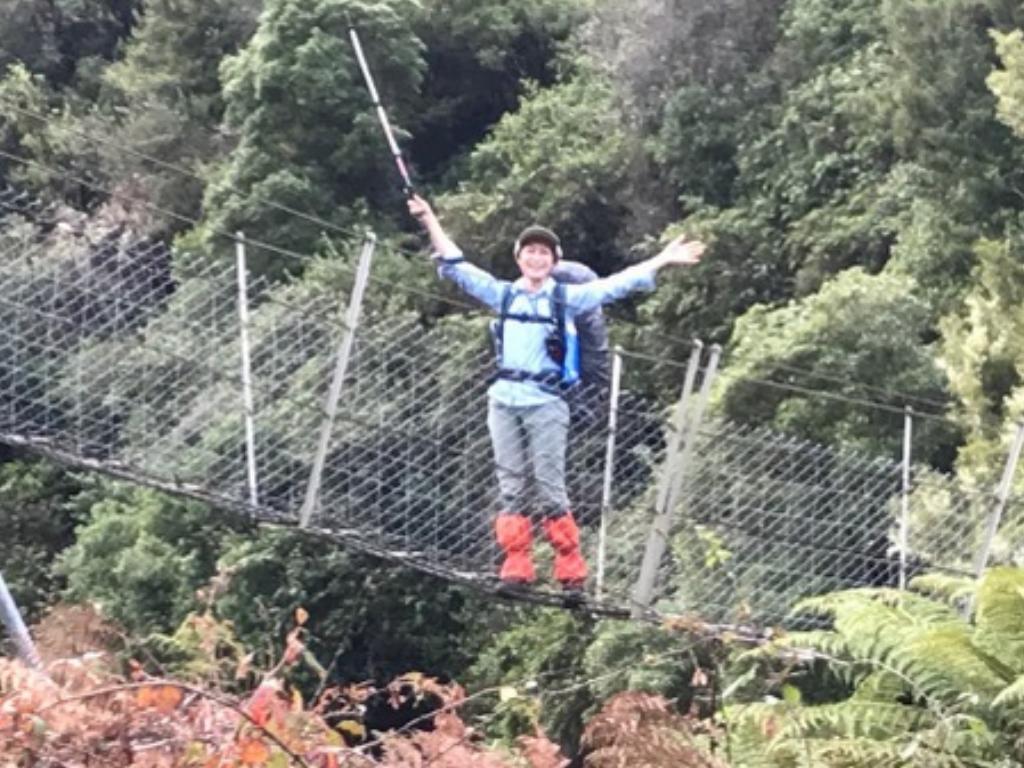 After 46 river crossings, we traversed the swing bridge, and shortly after arrived at Te Pourewa Hut for a short break. Later, climbing up the hill (it was steep) on a well-marked track we heard lots of birdlife including a kokako. There were many opossum traps attached to trees along the way. Then it was then down the hill into the Ohane stream with multiple crossings to arrive at Ohane hut at 3.15pm. Chris and David camped in tents and the rest staying in the hut. The fire was lit which kept things warm. We made the scheduled radio call but reception proved to be poor. The nights entertainment was provided by a people friendly rat in the hut. 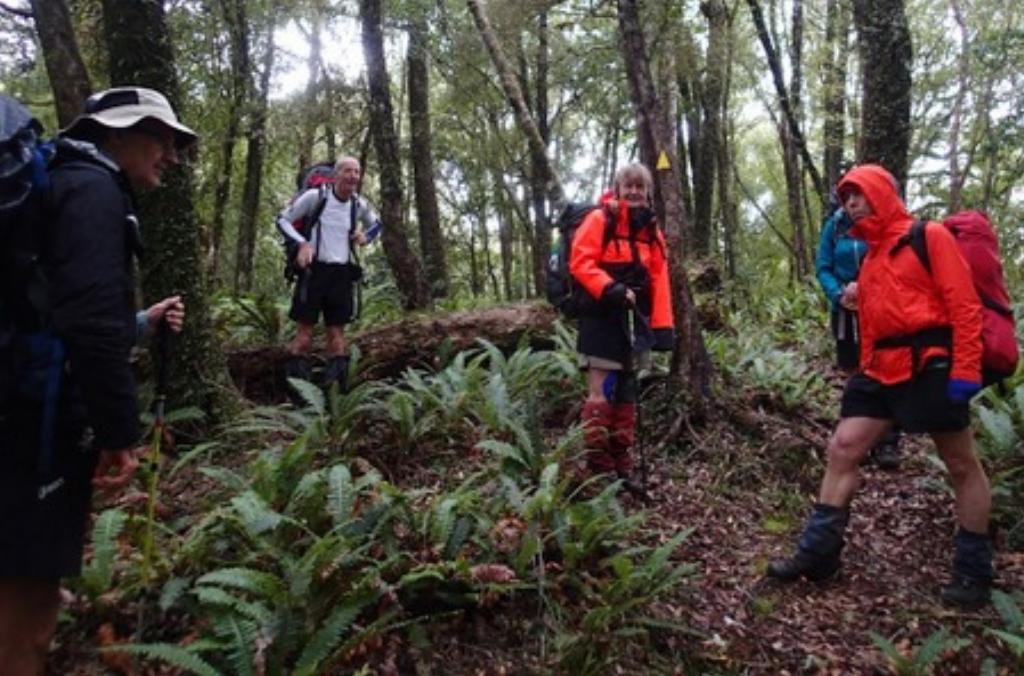 The next morning, after a frosty night and no apparent rat damage we were off at 8am down the Ohane River, not deep but definitely wet feet, to its junction with the Whakatane River. We followed the Whakatane downstream, sometimes along the riverbank at other times following the track into the bush. The track was well marked for the most part but at times blackberry hid where we were to leave the riverbed to enter bush. This was probably the more interesting part of the trip with wide vistas of the Whakatane River valley and quite a few dead possums hanging from traps or having been poisoned. At one spot there were approximately 8 recently skinned opossum carcasses.

We saw several horses, passed a modern marae with several dogs tied up and no people around and saw a jet boat go down the river with three hunters and three dogs on board. The dogs were sitting up as if they owned the boat.

Around the middle of the day we arrived at Ohora hut, a two-bedroomed place with all the mattresses missing, a bent chimney and a leak in the roof. But it did have a modern toilet: one of those new-fangled plastic-composting types. 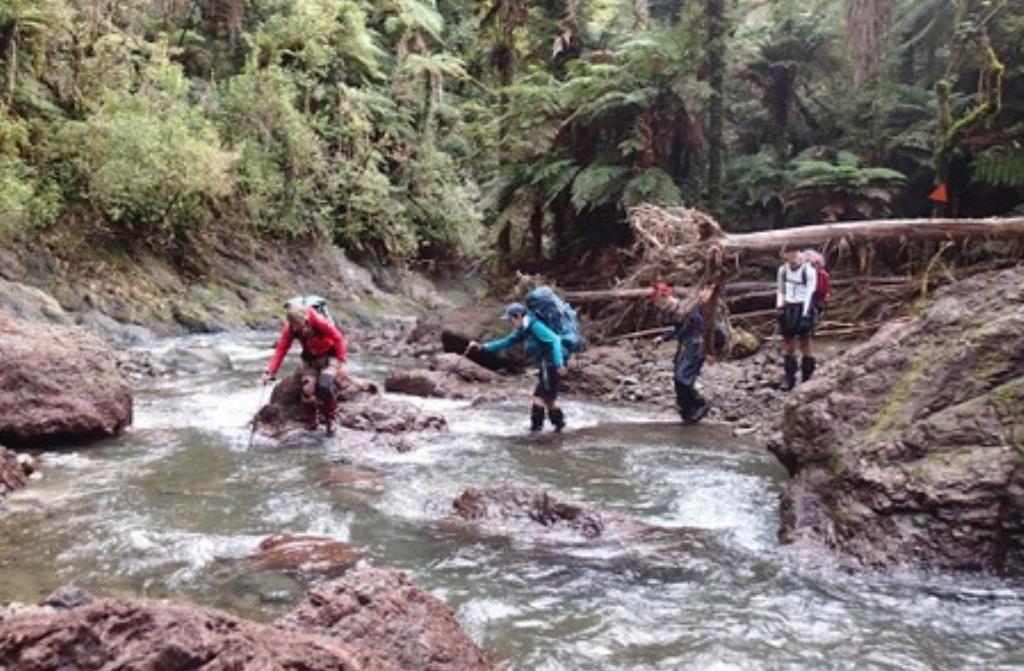 After lunch it was a case of multiple crossings (one count was 102 for the day) up the Ohora Stream to Onepu hut, which we arrived at around 2.15pm. While it did involve wet feet, stream travel was actually quite fast, with the deepest being up to the knees on the men. Onepu hut was a seven-bunk job with no boards and mattress on one bunk and no mattress on the other bunk. However, it’s main claim to fame was the toilet seat, which was dangerously close to falling into the abyss. Chris did the tent thing and David blew up his camp mattress to use in place of the missing one in the hut. Firewood was gathered, the fire lit and spare wood left to dry. More care was taken with the radio this time, the aerial being set perpendicular to where we thought Tony’s party would be and the connection between radio and aerial being completely unwound and laid out in a straight line.

Voila! Good Reception: Tony due at the bus at 10.30 am, us estimated between midday and 1pm at the track end and Athol 3.30 pm.

On the last morning (Monday) we were away at 7.30, the earliest possible as we needed good visibility to see the bottom of the river.

We backtracked the previous days path downstream for 40 minutes to the junction of the Pohatu and Ohora streams and traipsed up the Pohara stream. We spotted an eel slithering through the water and a dead rainbow trout on the riverbed. At times we travelled through sections of bush adjacent to the stream and encountered the odd wind fallen tree, which we had to clamber under, over or around, but generally good progress was made. After approximately 93 crossings it was out of the stream onto the Pohara track, which involved a steady climb of about 350m then, downhill and out to the road at 11.45 am. Early!

The rest of the party wandered the 7 to 8 km down to the truck while Rob and David stayed and looked after the gear. The truck with Tony’s party on board picked us up a couple of hours later and then it was back up the road to pick up Athol’s group. We hit the road back home about 3.30 pm with a stop later at a takeaway shop for dinner.