The trip began at the Wharawhara Road end with many sleeping Friday night on the bus and half a dozen in tents in a small grassed area at the start of the track. No toilet at this road end.

Saturday morning was bright and clear and many were up by 6.30am. Baldy and Wahine Rock could be clearly seen in the west on the sky line. The whole party was ready to go by 7.30am, travelling up a short sealed access road to a water treatment plant. The track crosses the river at this point either by the weir or a bit drier boulder hopping just upstream, rather attractive large rounded boulders.

The trail leads up the river towards Waitawheta hut and the Te Rere track climbs off to the left 500m up the trail. The track climbs through lowland rewarewa forest for about an hour to 400m and the junction with the Hot Springs Road track, which is now closed for kauri protection.

The track levels and descends a little into more tawa forest, travels over point 490m and then climbs steadily to Te Rere. A couple of small openings in the trees give views back over the Athenree area and inlet and further up the range to the west with Wahine Rock.

We pass a small heli pad and the hut at 620m was reached by 10.00am and we all congratulated ourselves on our quick day’s walk.

Time for a brew, chat with the fast group going to Motutapere Hut and pack for the outing to Wahine Rock.

Baldy is the high point above the hut just 40mins return detour and is well worth the effort. Baldy gets its name from the low scrub and dracophyllum growing all around the area. The views from here are amongst the best in the park, 360 degree panorama, don’t miss it if the weather is clear.

The trail drops off Baldy to the north on the old NS track initially in scrub and grassland, but quickly enters the bush and drops steeply under Tangitu to sidle east of the massive rock faces. 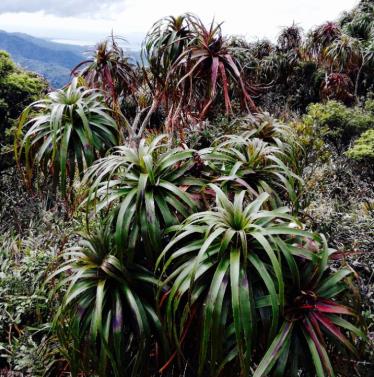 We crossed an old large slip on its NE flanks and many found the going a bit tough, turning back at this point.

Two of us continued on up the ridge through stunted forest on a well-marked but poorly maintained track. Beech forest appears as Wahine Rock at 800m appears on the right, the track avoiding the top.

We stopped and headed through the scrub to the top. Views not so good, large forest trees growing in the lee of the range obscured all the east views.

The Wahine Rock figure can be made out sitting on a side rock is seen below as one of two rock outcrops. Apparently the view is better further up the track but we didn’t know this at the time.

We returned to the hut, back the same way by 2.00pm. Time for lunch, a relaxing afternoon and Keith and Philippa from the easy group had arrived. I had collected a few leaves during the day and we sat with some tree identification literature and Philippa proved most knowledgeable and we learnt to identify some of the local flora.

Dinner time came around early and the rain set in.

We had two Scots, a local and 4 Koreans arrive and all needed a bed. 5 of us had put up tents so the total of 18 all had a bed somewhere.

It rained heavily during the evening and by morning it was still rather grey and windy, but little rain. We all rugged up and headed south along the range dropping to the Tuahu Track saddle at about 500m. The views are best on the high points before the saddle.

A short rest stop to refuel and we all headed off east down the Tuahu Track which is a well graded old coach road through a most attractive tawa forest. Only minimal views out to the east.

The track winds down through at least three side streams/waterfalls. One stream is in waterfall somewhat like a giant rock slide.

Camping at the saddle could be possible but water probably 20mins down the track either side. Te Rereatukahia Stream is reached at 250m, a very pleasant stop to rest.

Approx. 1km walk to the kauri tree loop, a gravelled path and timber walkway past two large kauri. One appeared to have quite a lot of bleeding from its lower trunk.

The turn off to Sentinel Rock headed uphill off this loop. Two of our party made the side trip, approx. 1hr to views (DOC sign says 1.5hrs). The south end of the track to the rock is closed due to dangerous conditions. Good views were reported.

The final 1km is through a strand of kauri and gravel track, a most pleasant and peaceful forest walk. We were all at the bus by 12.00 except for the two Sentinel Track walkers who were approx. 1.5 hrs later.