With an early morning start we were lost before we even started, being just south of the forestry road end.

Once on the forestry road it was a steady climb past the locked forestry gate to an unmarked junction in the forestry road to try and pick up the track. With the use of gps and mobile phones we headed into the pine trees and climbed again to another junction.

Old markers were picked up and we are on the Waihua Valley track. Good ridge line track with plenty of possum traps with skeletons met us along the way.

The sunny warm weather with a clear sky meant great views of the surrounding mountains.

We located the intersection and started a steep descent to the river then a short river bash to check out the Waihua Hut.

A bit confused after coming down from the hut with some wanting to go down stream while others keen to go up stream we quickly corrected and continued up the Waihua Stream keeping a look out for the Te Inepa Stream where we were headed.

The stream was marked and good going with the hot sunny day pleasant to be doing river walking.

Casino Hut, located up a small rise was fully occupied with 3 hunters who had been in residence a few days. We had spotted a few deer coming up stream.

With limited camping a small tent village was erected. The medium party minus their leader came through later in the afternoon; the leader followed a while later.

The next morning was a delayed start with half the party ready and the other half not yet out of their tents. A good climb up to the ridge and then straight down back into the river.

Careful to choose the correct stream, we quickly located the Te Weramata Stream and started another good day in the river with sunshine and a few logs and deep river areas to navigate around.

Selina managed a head butting with the rock wall on a sidle holding onto rope provided to haul up from a pool.

Crossing paths with the easy group we were warned of the remaining track after Duckville being poorly marked and needing careful navigation.

A side discussion was had with some of the easy party with Phillipa emphasizing the blue bucket lids and to take the sidle track to miss a waterfall.

The Duckville Hut was a welcome sight with what appeared to be a hunter in residence and after reading the hut book we discovered Duckville is home to Kai, a local trapper who had left the previous day to take his skins to market and was to be gone for a week.

The hut book mentioned a track that went over Hikurangi the hunters and trappers used, Chris suggested we take this 4 hour route, may have been an idea had we known what our planned route the next day had in store for us.

With a very early start the next morning up the river a bit through the ongaonga and locating the odd marker we found the spur and made a straight up steep ascent.

Once on the ridge it was necessary to keep checking the markers, gps and phone to make sure we were on track, with a few corrections. 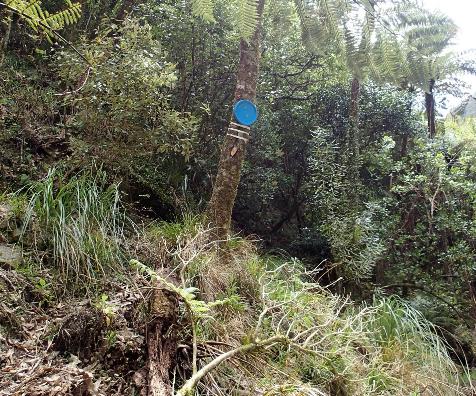 We lost the markers on the steep descent but came out to the Ohutu Stream to sunshine and time for lunch.  Plenty of logs in the stream going down stream.

The blue bucket lid plus a cairn were easily spotted. The group had a cursory look for the track and decided to carry on downstream. After a short while Mark was pack floating down a large pool.

Half the group decided to back track to the blue bucket lid to sidle the upcoming waterfall. Mark and Robin, wanting a bit more adventure decided to carry on downstream to the waterfall.

Back at the blue bucket lid the track was quickly located going straight up and then a well-marked sidle track was followed. After coming down the sidle track the remaining track was well marked with blue quarter bucket lids.

Again a bit of confusion at the end of the track with what looked like an exit point on the true right of the river across farmland and thinking the bus was parked on the true left of the river had the sidle party cross the river.

The 2 adventurers were just behind the sidle party and left one member at the stile to wait for us (not knowing we were ahead). 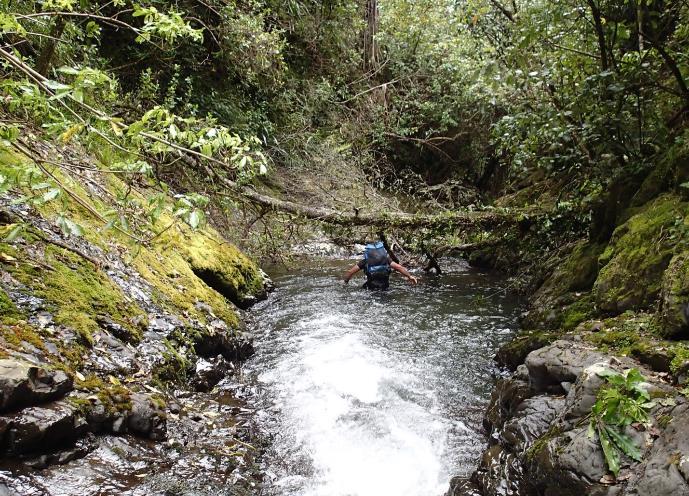 Once the sidle party had phoned Keith and checked the bus location we crossed back over the river onto the farmland and what a surprise when a pack of dogs plus Robin walked up to meet us.

Robin backtracked to collect Mark who had not seen us, a small delay and just in time to get back to the bus before the first rain started for the entire trip.

Robin reported that on continuing downstream the pools got deeper and deeper and the swims longer and on reaching the waterfall they could not see the bottom of the drop, a bit too high to navigate down.

They retreated and climbed up to the sidle track and came out at the blue bucket lid sidle track entry. The good farmer where we had parked the bus reported hunters had let a deer go over the waterfall and it only popped out 2 weeks later.