Though rain and strong winds were forecast for Easter, twenty-one keen trampers, with the knowledge of the fall-back comfort of our hut, decided to brave it.

After gathering in the evening to decide possible activities, final decisions for possible tramps were delayed until the morning due to the indifferent weather forecast and the fierce wind gusts outside that continued through the night.

Clear weather but high winds so, with the chair lifts not operating, lower mountain activities were indicated. A couple of tramps were decided on.

This is a plaque on a rock at the head of the Whakapapaiti Valley in memory of Warwick Stanton, an 18-year-old tramper, killed on the mountain in 1931.
The route is untracked so the first group left from the hut, climbing first to the Manawatu Hut and then headed towards ‘The Lizard’, a distinctive spine of rocks. There the tramp came a little unstuck; losing two members who had decided not to follow the main party. A search was established and eventually one missing member appeared, but time was lost so some of the group returned to the hut while the others carried on over the many ridges to the memorial, a large rock on a stony plain. As hoped, the other missing member had gone back to the hut, having walked out via the Round the Mountain Track. She had alerted the police that she was safe. All in all a good cross-country tramp.

The second group left from the DOC Mangahuia campsite on SH 47.
This follows the Mangahuia Stream, through fern-bird scrub, beech and podocarp forest then alpine tussock-land to the turnoff to Whakapapaiti Hut (on the Round the Mountain Track). The track then crosses several streams in heavier bush with fantails, finches and tomtits. The sun by now was shining as the group passed the junction to Silica Springs then continued along the Whakapapanui Track to exit at the Whakapapa camping ground.

By now we had clear weather with a gentle breeze. Once again we split into a couple of groups.

The Skyline Route beckoned. This is an RAL initiative, but unfortunately the RAL Rockgarden Lift had electrical troubles. Undaunted, the first group walked up to the Waterfall lift and rode to the café where the walk starts. The Valley T-bar area is vastly different from its winter scenery. Now it is all red and ochre smooth, volcanic rock. The head of the valley was reached and high up by the fractured pinnacles a great lunch spot was found. Two of the pinnacles were draped with tape to show conquests. Views of Taranaki and Pureora were splendid, but mist started to come in so we repaired to the café. Eighteen months ago this, along with the lift, was the target of an arsonist, but no trace of this stupid act now remains.
The other group went on a wander.
Starting on the ‘Ridge Lookout’ track immediately above the Château, they made their way up the ridge overlooking the Whakapapanui Stream then went cross country to reach the Wairere Stream that feeds the Taranaki Falls. This stream was then followed up to where it exits from a gorge coming down from the Pinnacles and, after a scramble up the steep western face, lunch was eaten high up on the ridge. The route circling back to the ‘Ridge Lookout’ track was a leisurely stroll. 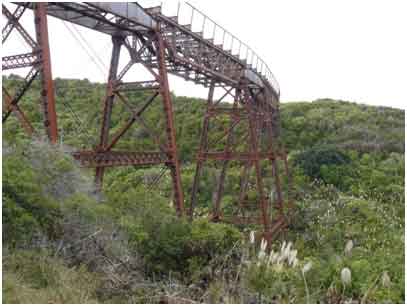 The photo shows one of the old viaducts. The whole group enjoyed the good weather by doing the Old Coach Road. This national cycling and walking track follows the cobbled road that connected the gap in 1906 to 1908 in the Main Trunk Rail line. The gap contained the Raurimu Spiral and five viaducts, so was costly to build. The present-day track goes from Ohakune to Horopito. With cunning car management, we all started from Marshalls Rd, Ohakune.
We tramped farmland then beautiful bush to the Hapuawhenua Viaducts, one old and a new one now in use. In the bush there is reputed to be a rimu that is 1500 years old. The old viaduct with its exciting gaps can be safely walked to a great picnic site. On such a lovely day many biking families were enjoying themselves also.

The fourth day saw the party break up into three groups.
One group repeated the Mangahuia Campsite Track on the strong recommendation of the party who had done it previously.
The second group set off from Whakapapa Village on the one-hour Whakapapanui Walk. The track follows the stream and numerous side paths were taken to observe water gushing through cuttings, large rimu, totora, NZ cedar and mountain cabbage trees. Mistletoe was seen on some trees; tui, tomtits, fantails and finches sang. Not content with that for a full day, the group enjoyed the Taranaki Falls track, along with many other visitors. Lunch was at the beautiful falls.
The small third group had a brilliant day exploring Tongariro. The stream just above the Mangatepopo Hut was crossed and then the ridge followed up towards Mt Tongariro. A traverse around to the North Crater for lunch then up to the top of Tongariro for the views, along the ridge to Red Crater and then back along the Tongariro Crossing track to return to the Managatepopo carpark. The colours of the landscape were spectacular.

It was a pack-up and clean-up day. All happened so quickly that we left the hut by 8.30am
We had enjoyed glorious weather, wonderful sunsets, and great company.
Thanks to the Memorial Hut club caretakers, and trip organisers.