River crossings, no tracks, a bit of bush bashing and open tops - it was no surprise that this trip to the Southern Kaimanawas was booked out early and had a waiting list of half a dozen. An attempt to do this trip a couple of years back had had to be cancelled because of high river conditions - otherwise it was eight and 38 years previously when this route had been covered. Ninety-five percent of the route lies outside the State Forest on private land and the necessary permission was sought to enable the trip to be done.

Friday night, we stopped at the Urchin campsite on Kaimanawa Rd. There was an early start as we had to drop off the easy party at the Urchin Track before heading on to the Waipakihi Rd end.

We set off up the Waipakihi River under light drizzle with low clouds obscuring the tops. However, the occasional glimpse revealed a light dusting of snow up there. After several river crossings and shortcuts through beech forest, we came to a split in the river - was it an island or the Little Waipakihi? A quick look at the map confirmed it as the side stream. More crossings later we left the stream to proceed up a ridge to the tops. There was a steep bank to scramble up first then a less steep climb up a beech-clad slope to reach the ridge. Animal tracks followed on the previous trip were no longer obvious and progress was made by sticking to the ridge - scrabbling through or around windfalls - as we gradually climbed to the bush line. I had said there was a dense patch of leatherwood on the bush line, but was surprised to find that instead, the open tops were guarded by scrubby beech trees -- and so we emerged onto the ridge in time for lunch in the sun. 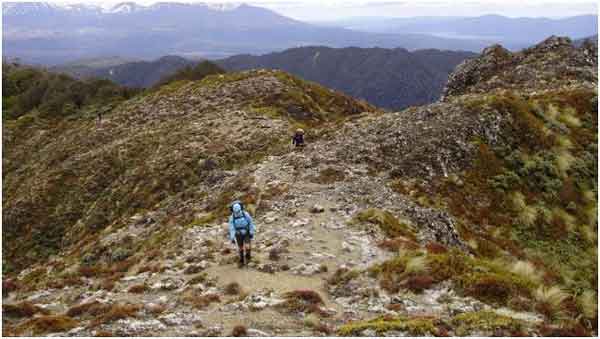 Carol & Martin on the ridge to Brasell The cloud had been blown away by now and we had views down the Waipakihi and across to Ruapehu and Ngauruhoe, albeit the former still had a cloud ‘hat’. Ahead of us was the highlight of the day - a ridge dotted with numerous rocky tors leading to the exotic sounding peak of Brasell (try saying it like the South American country) and on to an unnamed spot height, which at 1718m is the second highest point in the Kaimanawas.

It was difficult to appreciate the views as the strong wind coming from the south meant the air temperature was barely above freezing. From the high point, we proceeded across the shale-covered tops to Otirirau with views ahead of us stretching across the tussock tops of the Southern Kaimanawas to the Kawekas and south-east to the Moawhango River in the army firing range.

We dropped down towards the Moawhango River, with the vanguard of the party spotting a deer on the bushline, and managed to find the same ‘campsite’ as last time. Amazingly for a party of 12 (and nine tents at that), we managed to find sufficient flat areas for everyone on the beech-clad slope. 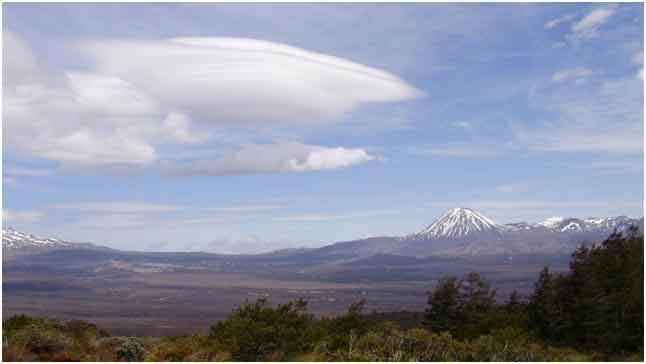 Cloud UFO approaches Ngauruhoe Five o’clock heralded a dawn chorus from the bellbirds, tuis and fantails in the area, but it was a good hour-and-a-half later when we stirred. There was a steep drop to the river, made easier by cutting through the bush and following an animal track down. A brief steep climb out followed by sidles of varying lengths depending on the party members’ whims, then once more we were back on the tops with the gusty southerly. Today we were looking due west to Ruapehu, which was capped with an impressive hog’s-back cloud. Between Ruapehu and Ngauruhoe, there were three similar clouds impressively stacked one on top of the other.

In this wind, we did not want to lounge around on the tops admiring the views. Most of the party were doing this anyway as they waited for the pedestrian leader to catch up. It was too early for lunch on the disappointingly named ‘Needles’ so we headed west of north-west down towards a clearing just below the bush line. We could see the Waipakihi River below us and, according to the map, just over three kilometres away. But now the bush bashing was to begin in earnest. Previously, we had found an old hunters’ track which headed north then veered to the west. However, we had left the track and proceeded north, so unfinished business on this trip was to find out where the track emerged. Eight years on, and the route showed little sign of use. There were obvious blazes on the trees but underfoot, barely anything was visible and, with the many windfalls and regenerating undergrowth, we were constantly losing the ‘track’. A combination of bush techniques - not often required - were used, with old style compass bearings, observing the lie of the land and direction of shadows all supplementing the occasional GPS reading. We found where the route veered west and after less than a kilometre the markings hinted a turn to the north. Through the bush, we were looking straight down to the confluence of the Upper Waikato Stream and Waipakihi. It was a direction that got us back to the track, so off we went. Needless to say, we soon lost the ‘track’ and despite trying to stay on the ridge, ended up between two gullies with a steep scramble down a three-metre bank into a stream. Progress down the steam would have been slow, so we climbed half way back up towards the ridge to the west and sidled round to where the ridge had dropped to a flat area marked on the map. To the east of Ruapehu, flat areas are often pumice plateaus and this was no exception. Far from being flat going through the bush, the land was dissected by deep gullies. To the north-west we could hear fast-flowing water - obviously the Upper Waikato Stream - and headed towards it. The last bit of navigation was to find a way down through the 10-metre pumice cliffs, then it was a stream bash down the river to the Waipakiki River and back to the bus. Thanks to the other members of the group who participated in this adventure. It would be nice to find out where the old hunters’ track emerges - perhaps in less than eight years’ time another ATC party will revisit the area and find out.