A visit to Tongariro National Park 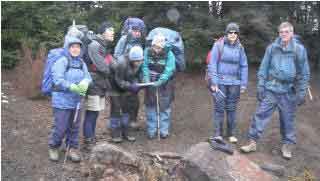 Thick mist streamed past the windows as Big Blue was buffeted by gale-force winds. We were high above the bush line on the Turoa road. The back door opened and no-one moved. Decision made. A U-turn and some careful driving as we met a bus near a sharp corner of the narrow road. Big Blue was reversed into the relative shelter of the carpark at the Round the Mountain Track.
Trampers donned storm gear and the fit party was away. The rest of us headed off into the bush and hurried to keep warm.

At Rotokawa, a tarn in an alpine bog, we had to imagine a reflection of the mountain. The Waitonga Falls could be heard thundering long before we saw them. At 39 metres, they are the highest falls in the Tongariro National Park, cascading over the face of a lava flow. Alas, there was no bridge over the boisterous stream. Wet feet spurred us on to our destination, Blyth Hut. As we passed Lupton Hut, the protective bush was replaced by windswept tussock and scree, covered with soft snow about six inches deep. We were very pleased to arrive at Blyth Hut although Brian’s chill-check told us that it was only five degrees inside. Wood was cut and soon the fire box gave out a cheery glow. Cookers were lit for hot drinks and the area was festooned with drying clothing and boots. We were inside the clouds. These lifted briefly and we had a view of Waiouru.

After lunch, Geoff arrived with a thin, hypothermic tramper - Philip - who had stumbled into Lupton Hut. Philip slowly warmed up and was very chatty for the rest of the day. People rested, warmed themselves by the pot-belly and discussed a myriad of subjects. In mid-afternoon, Ronald suggested a walk up to a snow basin near the ski field. We looked at the conditions above the sheltered hut. The gale force wind was like a blast freezer, so we stayed in the hut. Sue phoned Terry, leader of the fit party. They had spent the day in the Mangaehuehu Hut. We planned to walk down the Old Blyth Track on Sunday and they planned to go high, virtually doing the trip in reverse. After dark, we had a glimpse of bright stars which rapidly smudged with cirrus and disappeared behind heavy cloud. By 9.00pm everyone was in bed, listening to the wind thrashing the trees beside the hut. 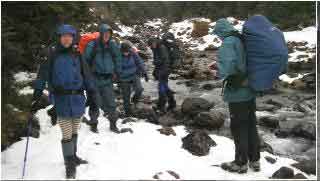 We farewelled Philip. Those with dry socks tried to keep their feet dry. Those of us with wet socks splashed through the streams and hoped to warm up when in the bush. It was much warmer when sheltered from the wind. The streams had dropped about 10 cm overnight and snow had disappeared from some areas. The advanced guard of the fit party met us at the Waitonga Falls lookout. They had decided to join us on the Old Blyth Track and the remainder of their party was going to head straight to the bus. The old track lead downhill through beech forest, with the occasional open area. The corrugations of logs across the track were very slippery and mud abounded. Unlike the heavy Waitakere mud, this mix washed off in the frequent puddles. A few birds sang in the depths of the forest. We were happy to see Big Blue through the trees.