We set out from Auckland at 9.30am on Thursday with two people missing. We later discovered that they had booked a taxi to take them to meet the bus, but it had arrived half-an-hour late to pick them up. Unfortunately, they were unable to arrange alternative transport.
There were 13 of us altogether, which meant we could spread out in the hut. Very pleasant! The weather was windy and cold when we arrived, but the forecast was good.

Started out cloudy, freezing cold and windy. One went off to do the Tongariro Crossing, while the rest of us drove along the Desert Rd, then up Tukino Rd to a carpark near the Round-the-Mountain Track. Wrapped up against the cold and wind, we set off, scrambling up a rocky hill to pick up the track. Gradually the weather cleared, the sun came out, clothes came off, and we enjoyed fabulous views of Ruapehu summit. By late morning we had reached the new bridge at Whangaehu River where the lahar came down in 2007. We continued on to Rangipo Hut for lunch, sitting in the sun looking out over the Kaimanawas, Lake Moawhango and Waiouru.
The return journey took just as long, and was just as up and down, but this time with the wind in our faces. As always, Big Blue was such a welcome sight. Home to a delicious dinner and a good night’s sleep.

Started out with better weather and as the day progressed it improved to a perfect summer’s day.
We drove south of National Park to Horopito, then along Clydes Access Rd to its end as a farm road. Here we were introduced to Errol Vincent, who was to lead us along the old Ohakune Coach Rd. This is a 38-km cobbled track used between 1906 and 1908 to ferry train passengers from the southern railhead at Ohakune, to the northern one at Raurimu. North-bound passengers spent the night at Ohakune, rode the horse-drawn, wild-west-style coaches along the Coach Rd to Raurimu next day, spent the night there, and then boarded the train to Auckland.

Over the years the road became overgrown to the point of disappearance until Errol came along. He is a man passionately committed to rescuing and restoring it despite many obstacles, not least the resistance of DOC to allowing Errol and his colleagues to work on it.

We would not have found the route without Errol as in many places it is almost completely obscured by overhanging trees and undergrowth. This was true bush-crashing. The bush has been untouched for 100 years, so it is varied and beautiful with some wonderful big old trees. Errol led us to some amazingly high old viaducts spanning deep gorges, and explained the stages of construction of the road all along the way.
He also showed us a few places where the actual cobbles had been unearthed. It was a fascinating walk through history and we enjoyed it very much. A big thank you to Errol. The best way to thank him is for us all to write to the Minister of Conservation asking for funds to be allocated to restoring the road, and making it accessible.
[More information written by Errol Vincent is available at http://www.historic.org.nz entitled Ohakune to Horopito Coach Road.]

Was an even better day for weather. We drove a shorter distance this time, to a side road near Taurewa and along a lovely loop track through the forest. 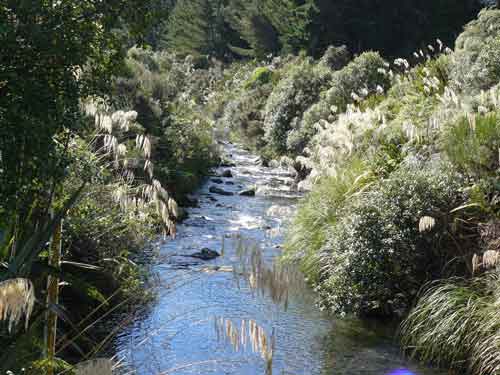 We all remarked how pleasant it was not to have to make much effort after the previous two, quite hard, days. Just meandering along, enjoying the magnificent towering old trees (lots of matai) with sunshine filtering through the canopy. We intended to find another track off the loop, but it turned out to be more of a 4-wheel-drive road, with scrubby undergrowth, so we turned back into the forest and completed the loop. Wes was influential in making that choice. Then it was lunch in the sunshine, back to the bus and along the road to Te Porere Redoubt, Te Kooti’s last stand. This was a half-hour walk up to well-preserved fortifications where Pakeha and Maori fought in 1869. Maori lost, but Te Kooti escaped and was not seen again for several years. We finished the day at the DOC visitor centre, then home to a delicious roast dinner.

Our last tramping day. We expected the weather to have turned, as it had rained the previous evening, but our luck held. It was off to Tupapakurua Falls west of National Park. For the first 20 minutes it was an excellent, graded track (developed by DOC together with the local community) to a lookout. From there the track was not quite as good and started to dive down, down, then up, then down, down (hard to enjoy fully when you know you’re going to be hauling yourself back up later in the day!). After an hour or so we came to a view of the falls, which were less impressive than usual after so little rain. There was the option, taken up by Noel, John and Keith, of going further down to the bottom of the falls. The rest of us, who were smart enough to work out that who goes down must clamber back up, took our time making our way back to the lookout and lunch. On the way home we stopped at the Mounds near the Chateau, then we had a short walk to the Tawhai Falls and back to the hut for another fabulous dinner.

We woke to find snow on the mountain, although not quite as far down as Mem Hut. It was a spectacular end to a fantastic trip. Thanks to John Norris for organising the trip, to the drivers, Bryan Taylor, Doug Astley and John Norris, and to Chris and Noel Ashton who always make sure everything, including the catering, runs as it should at the hut.