Monday morning ‘Big Blue’ with its passengers left the garage at 10.00am and after a stop at Matamata for lunch, arrived in Taupo mid afternoon. Three motor homes and several cars had also arrived and so we were twenty seven trampers in total. Heavy rain set in during Happy Hour that evening so we were very grateful for the cosy cabins to stay in rather than tents. 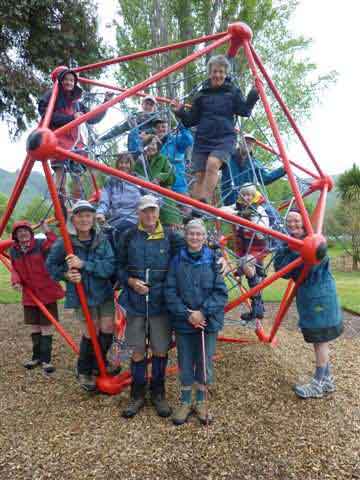 Tuesday 13th
W2K Track Whakaipo Bay to Lookout and Return.
It was a 9.00am start today and a half hour drive to our starting point, W2K (means Whakaipo to Kinloch) is a fairly new track built primarily for bikers and to be shared with walkers, which when finished, should be 93kms in total No one in our group had previously been there. The day was forecast to be wet and cold, but this turned out not to be the case. Nineteen of us did the Walkway all the way to the Lookout, had lunch here and returned. We were treated to a wide variety of native trees, the bush appearing very lush with many shades of green like a picture postcard and the Rangiora was flowering profusely.

Another seven went on the Tahunatara Point track which skirted the side of the lake and was full of Hound Tongue ferns and regenerating bush. At the end of the track there were views of the Karangahake Cliffs. On return it was so cold we walked up the hill a little way to try to warm up.

Forecast was for expected showers early afternoon when 21 on the bus set off for Mt Tauhara and on to Opepe Historic Reserve. Started up the track at 9.45 with a strong SW winds and overcast sky. A steady climb to the bush line across paddocks, then up to the summit on a well worn track. Very strong cold wind at the top, a quick look at  the surrounding countryside, lake and misty mountains, then down to a sheltered spot for an early lunch.
Bus to Opepe historical Reserve, the site of a massacre of a Bay of Plenty Cavalry soldiers by Te Kootis men in 1869 Their graves and those from the Armed Constabulary settlement (which was on the other side of the road) headstones were in excellent condition recently placed together with an interesting information sign. The gravelled path through the bush contained huge specimens of Rimu, Miro, Matai, Kahikata, tree Fuchsia and Pine trees. The settlement had an old well, saw pit and concrete building remnants, but very little else. It turned out an enjoyable day with no rain.
The other group went by private cars to the Waipahihi Botanical Reserve which contains over 2,000 rhododendrons, azaleas and camellias. With bush walks meandering all through the Reserve it was a pleasant walk but being so cold we were happy to return to Taupo and warm up in Robert Harris’s café over hot chocolate and coffee. A visit to the Rose Garden for lunch rounded off the day.
Thursday 15th

We set off for Kinloch to complete the W2K bike trail up through uninteresting sparse regenerating bush. Only occasionally was there a view. At the Lookout several turned back to the bus while 8 continued around the Headland Loop, a distance of 9.7ks. The bush improved with some pretty Clematis and even Ongaonga, not an
invigorating tramp – just a fast and furious 23km tramp in the drizzle which had now arrived. Would have been a fine bike ride however.

The other group steadily climbed up the hill after the faster party to the junction with the Lookout Track and then returned to warm up in the very nice coffee shop at Kinloch.

A fine warm day at last, so off to the Huka Falls where we left ‘Big Blue’ among the many Tourist buses. The majority followed the Waikato River to the Aratiatia Rapids getting there in plenty of time for the 12 mid day release of the flood gates. We chose various vantage points and were most impressed with the power and rush of water which quickly filled the rocky chasm. For the return to Huka Falls, about 12 in the group decided to try an alternative route on a bike trail 7.4kms, on the opposite bank of the river, through grassy trails, forest, eucalyptus and road, and of special interest a very hot stream. We needed directions on a couple of occasions due to logging – some of the trail was closed, but made our way back to the bus where the remainder of the group were eating ice creams etc.
The 2nd group also went to the Falls in the bus and after viewing the Falls from the main side, crossed over and walked a short way down the true left of the river before returning and re-crossing back took the track leading back to Taupo. It was a very interesting track with lovely views of Huka Lodge on the other side. Had lunch in a very sunny and sheltered spot in the Spa Thermal Park before continuing on to camp. Keith Williamson then drove 5 of us back to the Aratiatia Dam in time to watch the flood gates opening at 2.00pm. That evening we all went to the R.S.A for our usual Get Together dinner.

Only fourteen keen people arrived at Kinloch for the start of the walk to Waikawa Bay. Firstly we were forced to' warm up' by arranging ourselves on a pentagonal frame criss-crossed by strong ropes and then be photographed. Much hilarity! This shared cycle/walking track has been carefully contoured on ash-based tracks to suit both groups. Most of the climbing had finished when we reached a huge rock slab and a great view. Lunch at the lake was in light rain conditions. The return trip allowed a careful study of a very rare orchid (Thanks Pauline). Outward and inward times were more or less the same at 2:10 hours. Before leaving Kinloch, the
local café was well patronised.
Of the rest of the party, some decided to return home, a few went to the hot pools and then the movies and a couple had a walk in the rain around the Craters of the Moon.
Sunday 18th