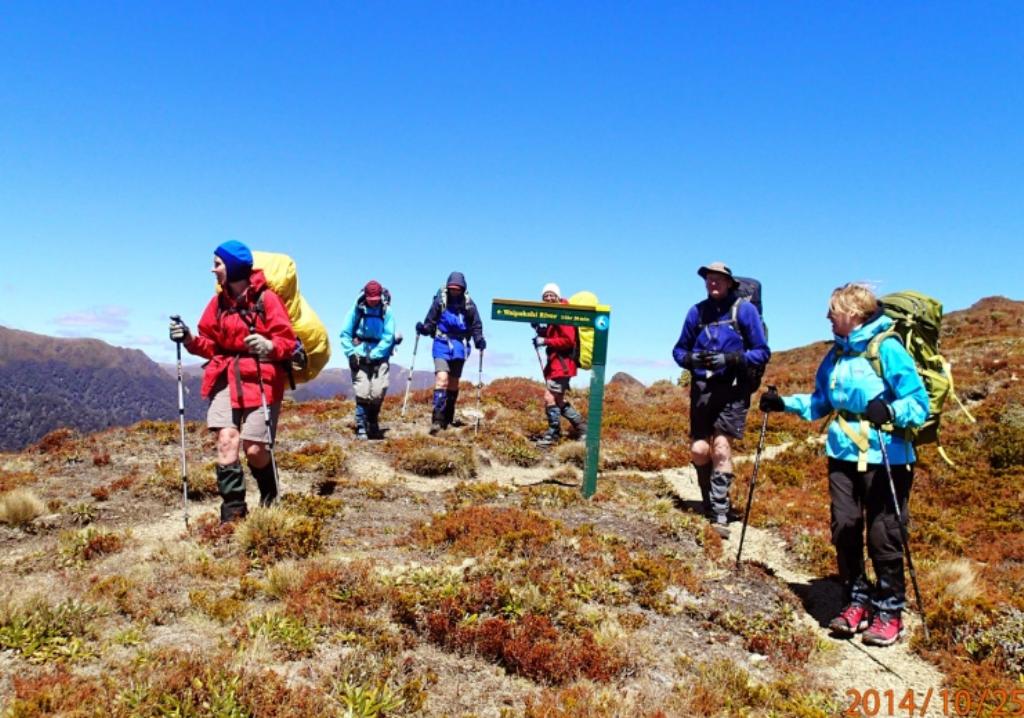 Saturday 25th. After overnighting at Kiko road a blue sky day greeted the group and after farewelling the fit & medium group we headed for Kaimanawa Forest Road carpark. All sorted 10 of us left the carpark at 9.30am for our "easy" tramp to Waipakihi Hut via Urchin. It was 20 mins to the start of the track and then a steady 700m climb to Urchin (1392m). Fantastic views of snow covered Mt Ruapehu and Ngauruhoe and the central plateau. After leaving the open tops for the bush section the track was much more demanding than expected and at our lunch spot 1 hr into the bush, I estimated it would be 4pm before we reached the Umukarikari junction and another 2 hrs to the hut. This was greated mostly with silence and some mutterings about "Easy"!! It was relief that we broke back onto the tops and arrived at the junction below Umukarikari (1591m) on schedule, only to be greeted by a DOC sign indicating 4hr to Waipakihi Hut!

Convincing everyone that I was right (only 2hrs) and not 4hr we trooped off and thankfully for me, we all arrived between 6 -6.30 pm, happy to find that with we could all fit into the 12 bunk hut with Louise deciding to camp. Much discussion followed dinner as we contemplated the weather (forecast for Monday strong wind and heavy rain), the fact that having had a big day the thoughts of tackling the tops not so appealing to the majority (day trip on Middle Range original plan). Eventually we decided to split into 2 groups. Half choose to retreat out back along the Umukarikari track, overnight in the bus, and weather permitting do a day walk on Monday. The other half opted to go down the river and camp at the base of the Waipakihi track to Urchin.

Sunday 26th.. The grass was crunchy in the morning and Lousie became cold in the night and showed slight sign of hypothermia in the morning. However with a blazing fire in the hut she soon warmed up and was fine before joining the group going back out along the tops. They had another clear day with great views. The river valley group left at 8.10am to enjoyed sunshine and lots of river crossings. The water was "refreshing" but we all enjoyed the multiple crossings and picking our way along the river banks. Despite the slippery stones in the river only Mike had a little swim but only went half way! A very enjoyable trip, we arrived at 2pm and camped on the western bank in case the rain arrived early. Although we lost the sun quickly Philippa made up for it with by organising a cheerful fire. At radio sked we learnt that Tina’s group were only a couple of km upstream and Claudia was injured, so we decided to wait for them in the morning in case assistance was required.

Monday 27th. As forecast, drizzle started about 7am, and soon settled into steady rain. Tina’s group arrived about 8.30am and soon after we left making the 400m climb to the junction in 1.25 hrs -a good effort in the conditions. Keith our driver went on ahead and the remainder took the next 45mins making our way along the tops in pouring rain and freezing wind - good experience! Happy to reach the bush line another hour saw us to the road end. With no shelter at the car park it was a case of a very quick change from wet gear into damp gear depending on how fast you could change. Those who spent the night on the bus were snug and warm not having ventured out - wise.