This promised to be a great weekend, with 28 people booked for Friday night through Monday, and fine weather forecast through until Sunday evening. And so it turned out to be - great tramping and climbing on Friday through Sunday, and not enough hardy souls keen to tramp in the rain on Monday, so an earlier return home.

The Monday-ised Anzac Day in the autumn weather provided a great opportunity to get away before winter, as well as providing an occasion to remember that ATC SnowSports Lodge used to be called Memorial Hut, in tribute to 5 club members who gave their lives in WW2.

A few of us arrived via car during Friday - some afternoon tramping, and a chance to get the Lodge all ready for the bus arrival with most of the party at around 1am on Saturday morning. We found the hut spick and span - thanks to all who had attended the March working bee. A new dehumidifier in the drying room, a window in the drying room door, and a great revision of the hut instructions and signage were the most visible improvements. A note for meat eaters - no better place to go this winter than the Lodge - the freezer contents are waiting for you !

Everyone was warned of an early wake-up call on our two main tramping days, and that worked well, thanks especially to Chris Burnett and his breakfast helpers who had a full breakfast ready before 6.30 am each morning, so that the bus with the main tramping party could then leave by 8.00. 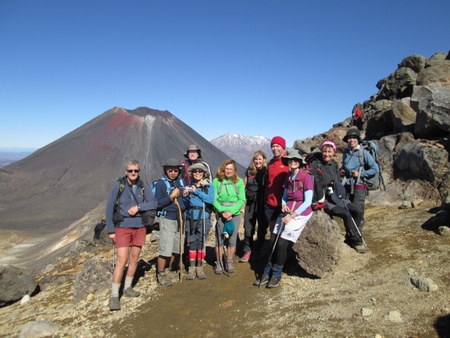 Contrary to instructions - as I should have expected, my dear wife Hazel duly informed the group that it was my 60th birthday. But forgiven a few times over because of the home made panforte’s that provided great snack food each day on returning to the Lodge

Chris explained about the "Memorial" part of the MemHut name, and played a recording from his phone of his daughter’s very effective bugle rendition of The Last Post.

Saturday trips were scheduled as Mt Tongariro via Hardmans Ridge, Mt Tongariro via the Tongariro Alpine Crossing (TAC) track, and other more local walks from the Lodge. In the event Jim had a core band of climbers organised as well, so the day’s walks were

1. Climbers - Mt Ruapehu (Tahurangi), and then the only safe route was down to Turoa and hitching to Ohakune - the party was rescued from there by Ian early evening

2. Medium - from Mangatepopo Hut up to Hardmans Ridge, then to Mt Tongariro for lunch. At which point the group split - one to North Crater, Central Crater, and back via the TAC Track. The second group returned directly via the TAC

3. Easy - from Mangatepopo up the TAC to Mt Tongariro, arriving as the Medium group were finishing their lunch. On the return some used the same route, and others went down Hardmans Ridge to Managatepopo

I was in the North Crater Group, so after a birthday lunch at Mt Tongariro, it was great to explore an area that none of us had been to before - and judging by the minimal footprints, it doesn’t feature in the plans of many of the 100’s of people close by each day. It is a large flat area with a crater hole about 70m deep to one side. The approach from the SW side involves walking across a small bluffy ridge, and from the eastern side there are great views of Blue Lake, Central Crater, and the TAC track going up to Red Crater. 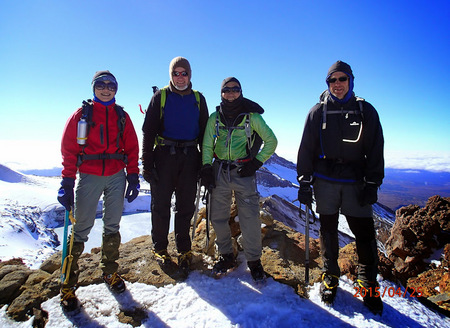 Returning to the bus on the TAC track was an especial bonus for Ming, as she had not done the TAC before - and it was a perfect weather day for it.

This trip report on the website has a superb set of photos from the climbing group, thanks to Fay’s ever ready camera. And for the medium group, some similarly superb photos from Ming.

Sunday’s forecast was still for fine weather, but with some deterioration towards the end of the day, and a bit more wind. However, the original schedule was very viable for all manner of walks, as shown by what happened

1. Jim’s climbing group were back for more, targeting Ngauruhoe and Tongariro - achieved in very good time, but a bit claggy on the summit of Tongariro

2. The main bus group dropped off the next two parties, then walked from the Ohakune Mountain Rd past Waitonga Falls to Blyth Hut for an early lunch, and explore up the poled open country towards Turoa, then returned via the full Blyth Track for a bus pickup further down the road

3. Another group left their car at Horopito, and were ferried by the bus to the other end of the Old Coach Rd, for that very interesting walk around the mountain, with old viaducts and more on their way back to their car

4. Two hardy trampers (Chris and Mike) took up the challenge and walked from the Turoa skifield on the Round The Mountain Track all the way back to the Lodge - just a little tired on arrival because it is such a long way of ups and downs around the mountain

5. Ian led a group from the Lodge cross country to Tama Lakes and back again

6. And a local group explored near the Lodge

The area south of the mountain was also new for me and most of our group, so it was great to have a new perspective from the regular Whakapapa views. And to experience the beech forest on that side of the mountain - especially interesting and more dense the further down Blyth Track you go. Oh ...and we accidentally managed to fall into a café at Ohakune on the way back to the Lodge !

A special mention of Andrew Murdoch, who on Friday arrived at the Lodge having been tramping around, and to the top of Mt Taranaki over the previous week. He duly joined Jim’s climbing group, and by the end of the weekend he had climbed the 4 highest peaks of the North Island over the space of a week - well done Andrew !

A little later than expected, but by Monday morning, the weather had become wet and a little windy, with heavy showers at times. No early wake-up call, but most people were up at a good time anyway. So the regular hut clean-up, as well as a couple of jobs for Jim and Hideo to do - all done in good time by mid morning. As leader I had an idea for a tramp near National Park, but in the event only Antal and I were interested ... and we would not have wanted to face a grumpy group of waiting bus dwellers after being away for 2-3 hours, so by late morning we were on the road to a lunch stop at Te Kuiti, and an arrival back in Auckland by mid afternoon.