We arrived at the road end a tad later than expected following an encounter with some soft ground on the road in. Despite the longer evenings, the fit party decided on an early start at 7.30am whilst the medium party had a more leisurely approach, exploring the YMCA camp grounds and waiting for Rob from Hamilton to join us for the day. 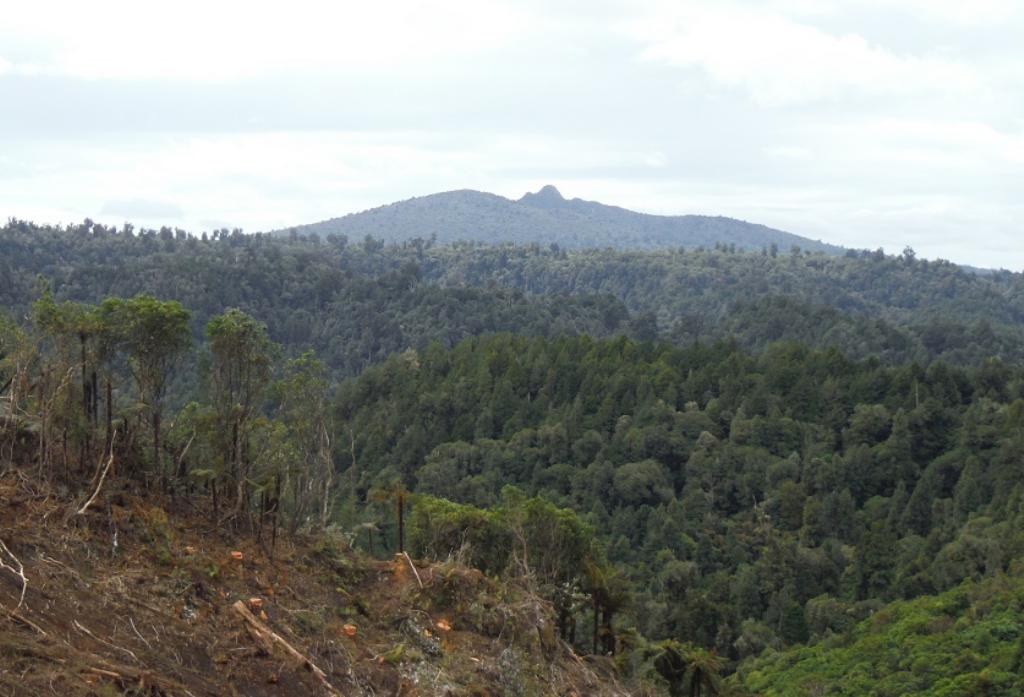 The climb up Titiraupenga was steady with the occasional diversion from the track to clamber round windfall. The high point of the day was reached with views to the north - Karapiro / Arapuni and Maungatautari, south - Ngauruhoe and Ruapehue and south west to the impressive summit rocks. 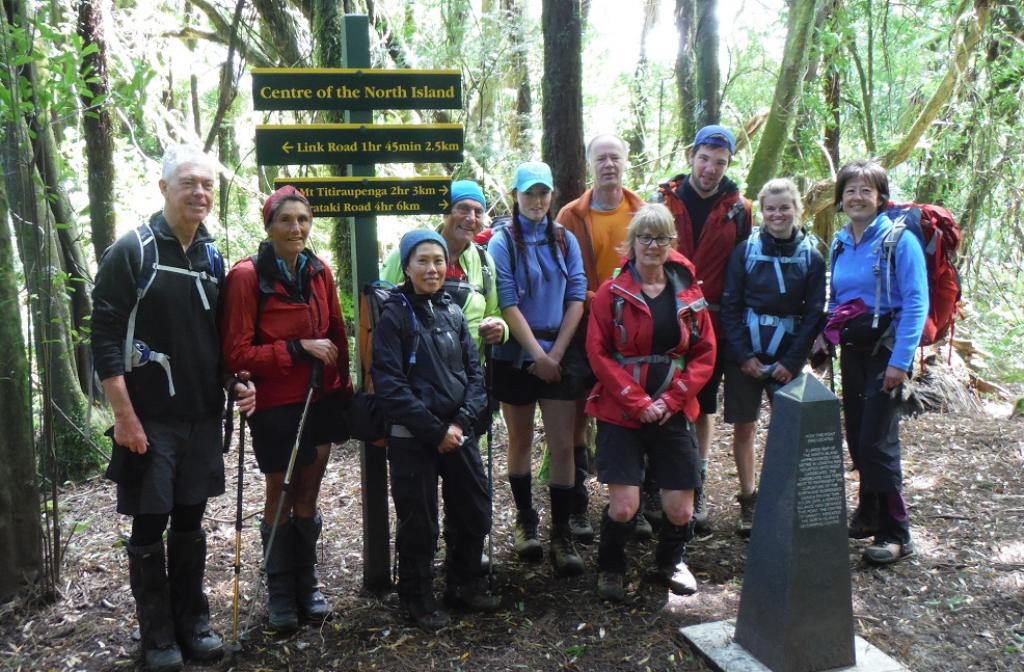 Out of respect to the sanctity of the summit the track skirts the eastern flanks, then drops steeply to the geographic wonder known as the centre of the north island. It is conveniently located on a ridge in a glade - a good place for lunch.

Thereafter we followed the track down into and back up out of gullies arriving at the lay-by on Link Road at around 2.30pm. The bus was waiting for us and so was deserter Bill from the fit group.

Down to Ngaharenga campsite at Pureora. After putting up tents and having afternoon tea, most of us headed up the road to the Totara Walk at the beginning of the Timber Trail. Margaret, Julia and Justin thought there was still more tramping to be had and headed off for the 6km + round trip to the forest canopy tower. Those who had had limited sleep the night before were early to bed, whilst others watched the every changing colours in the sky as the sun set. Some even witnessed a morepork perching on the camp notice board and a colony of native bats flitting around the bush margins in search of insects in the gloaming.

A few un-forecast showers during the night / early morning. We breakfasted to the sight and sound of several kaka flying around the tree tops. 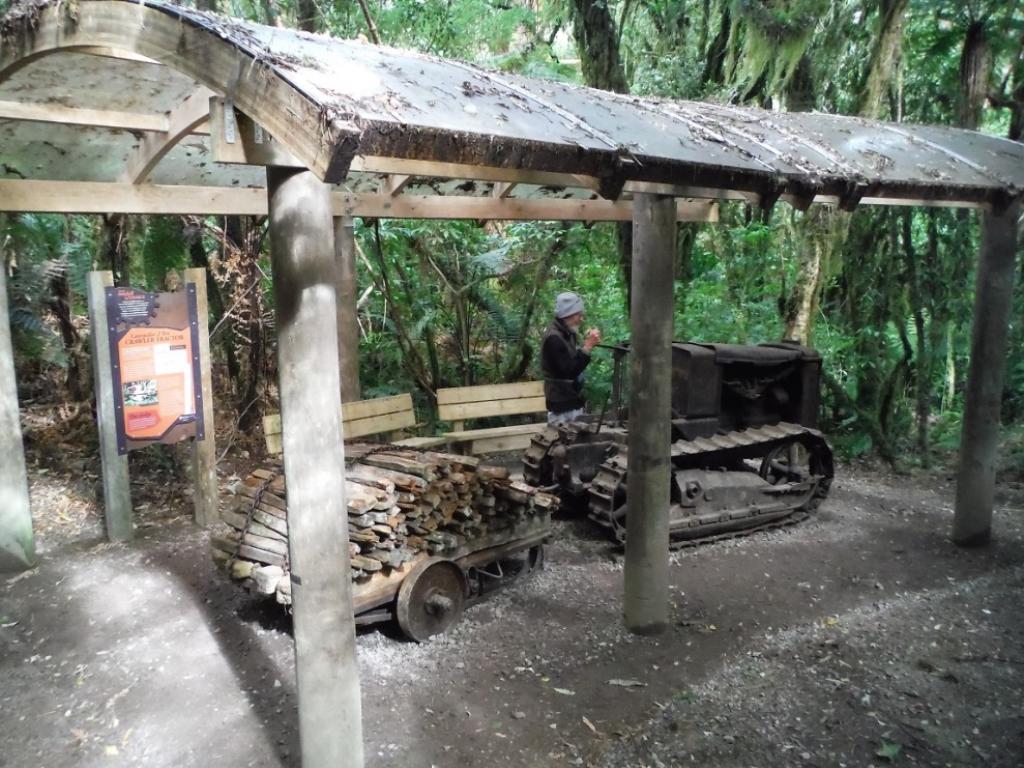 Driver Keith considers a caterpillar option for the bus

Good reports about the canopy tower prompted a visit in the bus, stopping off at some abandoned machinery before heading back up Link Road. 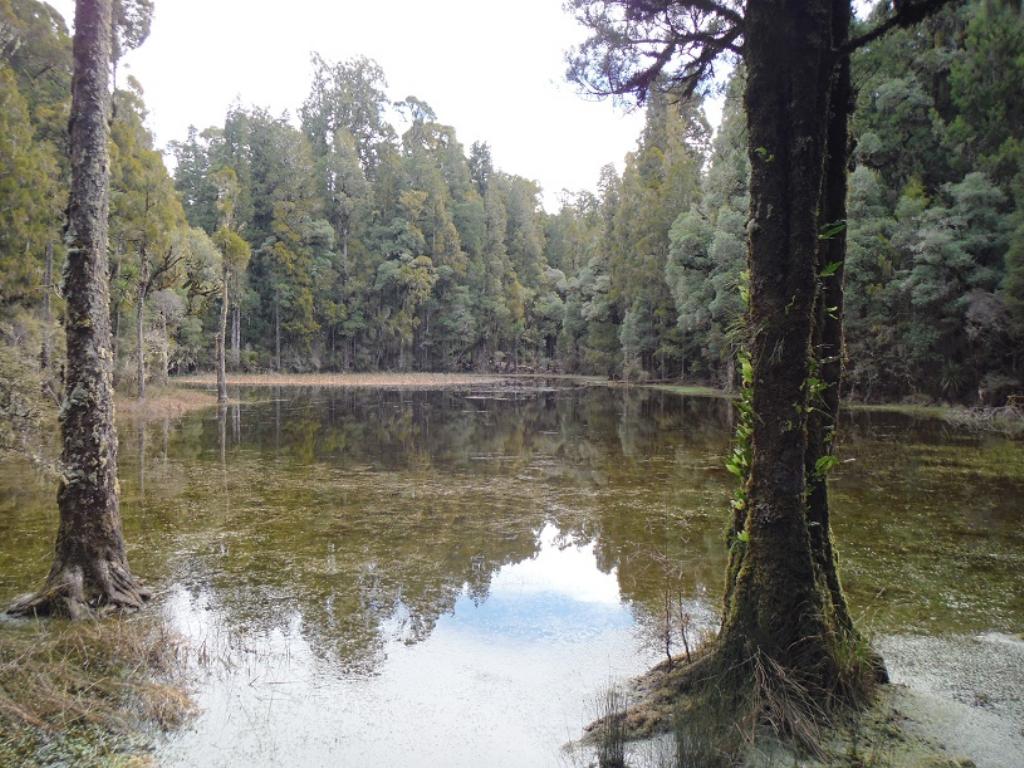 Part way up Mt Pureora, a couple descending excitedly told us of the views to be had to Mt Taranaki etc. It was not to be. Low cloud had descended by the time we got to the summit and visibility was reduced to 50m or so. We headed down the Bog Inn track - eroded in places but not at all difficult. A brief section of the Timber Trail, then Bog Inn hut for lunch. We were expecting a walk of just over an hour from here. The car park at the road end was reached, but the gate rumoured to be 3km further down the road was not there, but an additional 7km. Highlight of the extended road bash was a couple of captain cookers trotting beside the road. We were a bit late getting out to the bus and as the fit party had planned yet another early start, we expected that they would be waiting on SH32. They had got out early, but had stayed at the road end up by the lagoon and were only 1/3 along the road when we met them. With no turning points available, the bus headed up to the car park at Waihora lagoon to turn round - so having got that far, we all piled out and headed for a view of the lagoon.