Not Quite the Northern Circuit 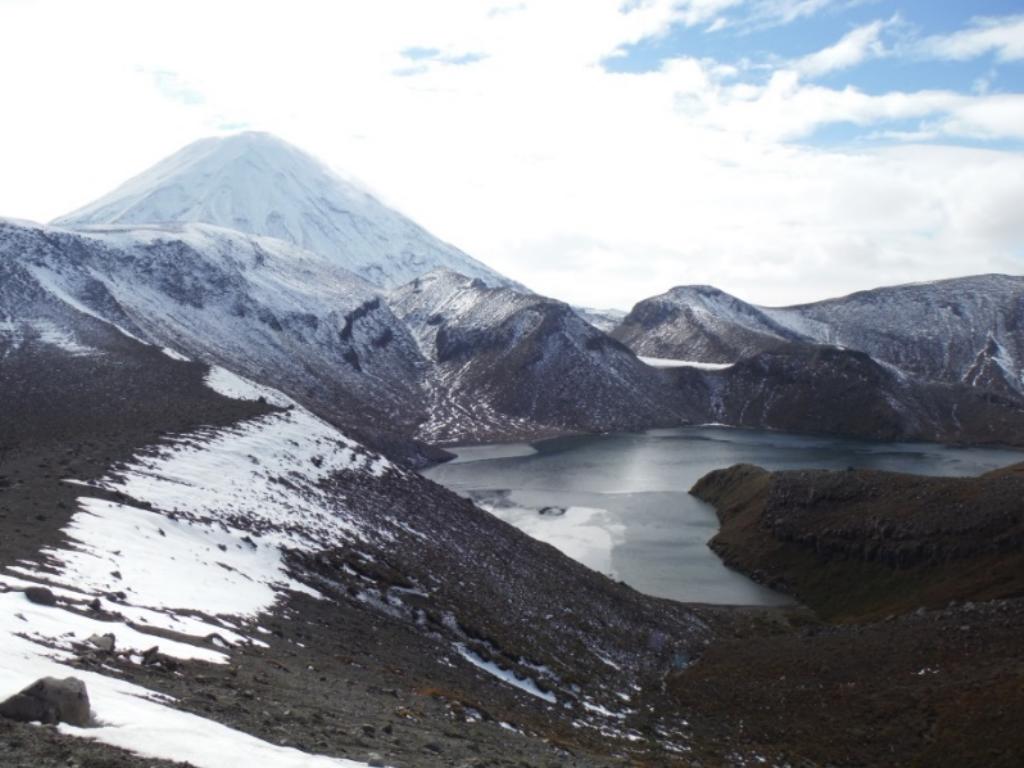 Plan was to catch the last rays of autumn and do the Northern Circuit before the snow arrived. Unfortunately the weather gods did not play ball and a southerly passed through a few days before, dumping 30cm of snow, followed by a couple of days of clear skies, strong easterlies and sub zero temperatures. As a result the track over Red Crater was covered in ice and crampons and ice axes were necessary to make the traverse. So what to do? Taking a leaf out of Denis’ Easter Trip, we went on a "wee adventure".

We arrived at Mangatepopo Road end around 12.45am and settled down for a moonlit chilly night in the bus. 7am, we were up and kicked Margaret’s party off the bus and headed round to Whakapapa Village to take breakfast in the comfort of the bus shelter.

Camilla and Rob joined us and we were off just before 9am, heading east on the Round the Mountain track. The sun was struggling to make an appearance and as we climbed higher, the easterly wind picked up. A brief stop at the top of Taranaki Falls, then on to Lower Tama Lake. We stopped for obligatory photos before heading up to Upper Tama Lake. When the track stopped, the adventure began. 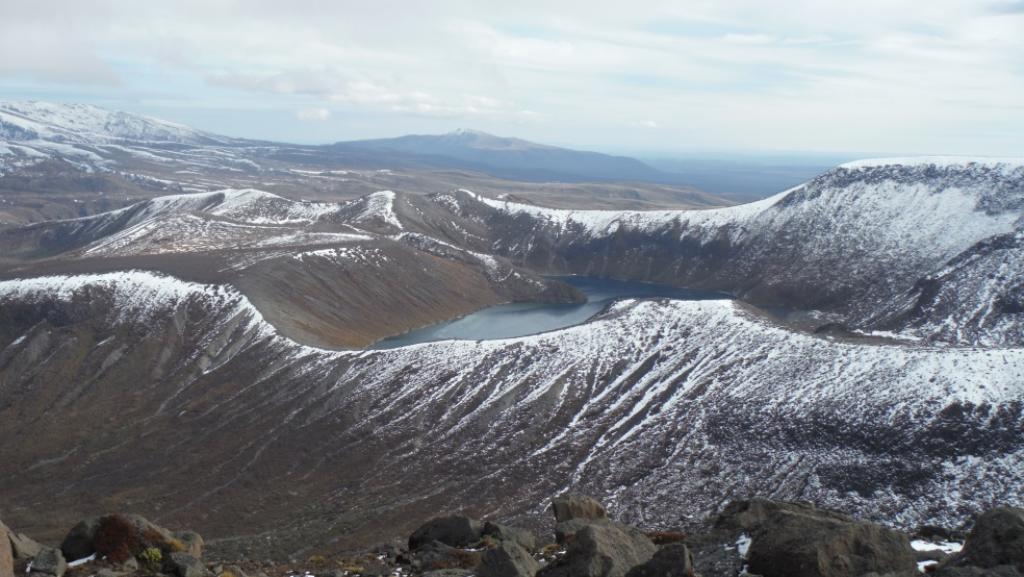 We skirted the southern side of the lake before dropping down onto a ridge leading up to Mt Tama. There was a bit of snow around and it took a while to pick our way across the patches of snow and between the rocks. Summit achieved and we enjoyed the 3600 views taking in the Kaimanawas, Ruapeheu, Hauhungatahi, Ngauruhoe and the Rangipo Desert.

A small backtrack, then a steep descent through snow patches onto a ridge. Followed this for a while before dropping down to Waihohonu Stream. Rob was pleased to show off the latest app he had downloaded onto his smart phone. We wanted to visit the springs and soon found ourselves in a swamp - yes these were the springs. The swamp became a stream. It was only a metre or two wide, but fast flowing, cold and surprisingly deep. Rob and Simon managed the leap of faith, but after seeing John slip back off some tussock and take an involuntary full immersion baptism, Bill and Martin chickened out and decided to wade across - the latter adopting the "wedgie" approach to keep his shorts dry. A couple more streams crossed then up out of the valley to pick up the Northern Circuit track. We made it to Oturere Hut just as it was getting dark. There was still room to fit us all and a roaring fire was already set to keep the hut warm. 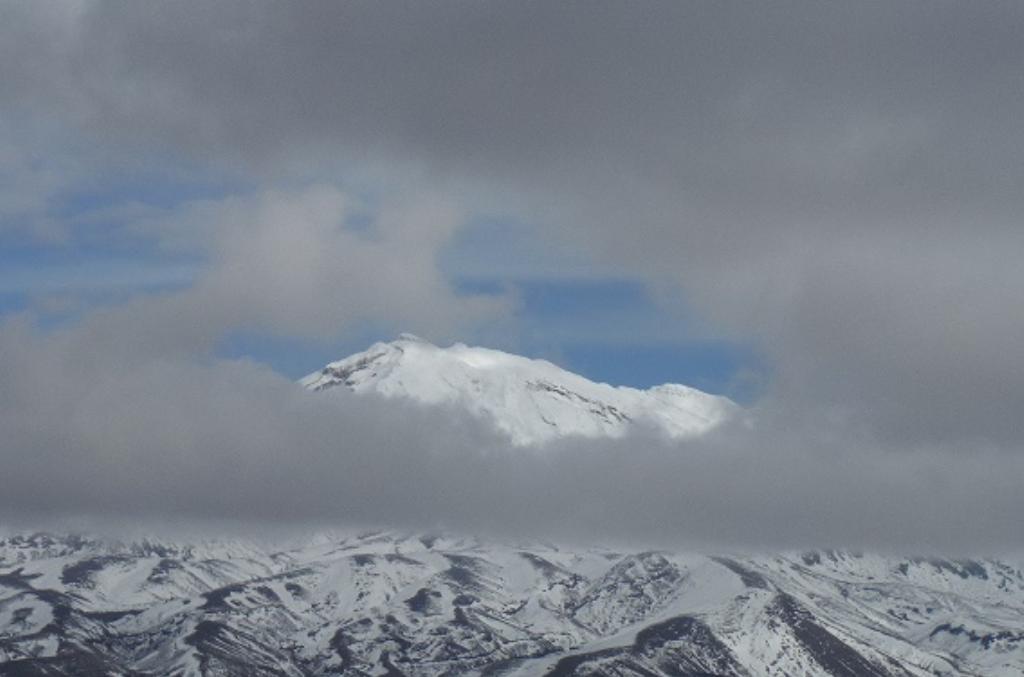 Sunday - forecast was for gale force winds and heavy rain. Neither came to pass. We had a late start from the hut and wandered back along the Northern Circuit track, across the desert area before hitting the beech forested bush lower down the Waihohonu Stream. We arrived at Waihohonu Hut in time for lunch. In the afternoon, we split up and explored the area. At Ohinepango Springs we saw a solitary whio perched on a log - some were lucky enough to see it riding the current and diving under water in pursuit of food.

Monday - it rained a lot overnight and in the morning there was low cloud / mist / light rain. Just enough precipitation to warrant a parka. We went out onto the Northern Circuit again and headed over to Whakapapa Village bumping into Tony’s depleted Round the Mountain group on the way. 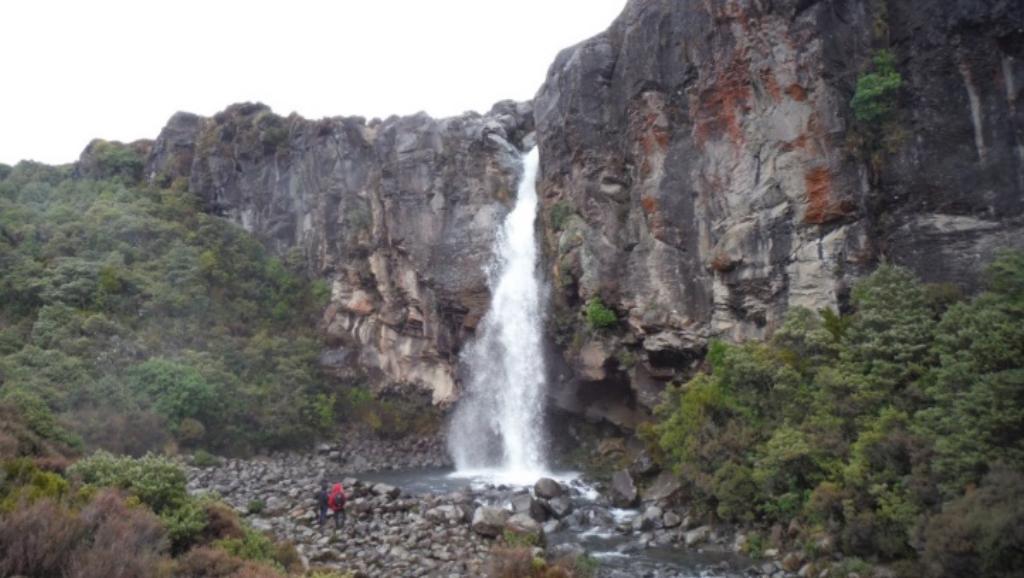 We took a brief lunch stop at Taranaki Falls and were out at Whakapapa Village just after 1pm. Margaret’s party arrived soon after and we were all packed up and ready by 2.15pm anticipating an early arrival back in Auckland. Alas NZTA did not play ball - 2 hours to cover the 5 km

past Rangiriri to Hampton Downs. As we drove further north we encountered heavy rain showers - apparently the norm for Auckland that weekend. We were lucky - it might have been cold down the mountain - but we dodged the rain.