Half Way Round the Mountain 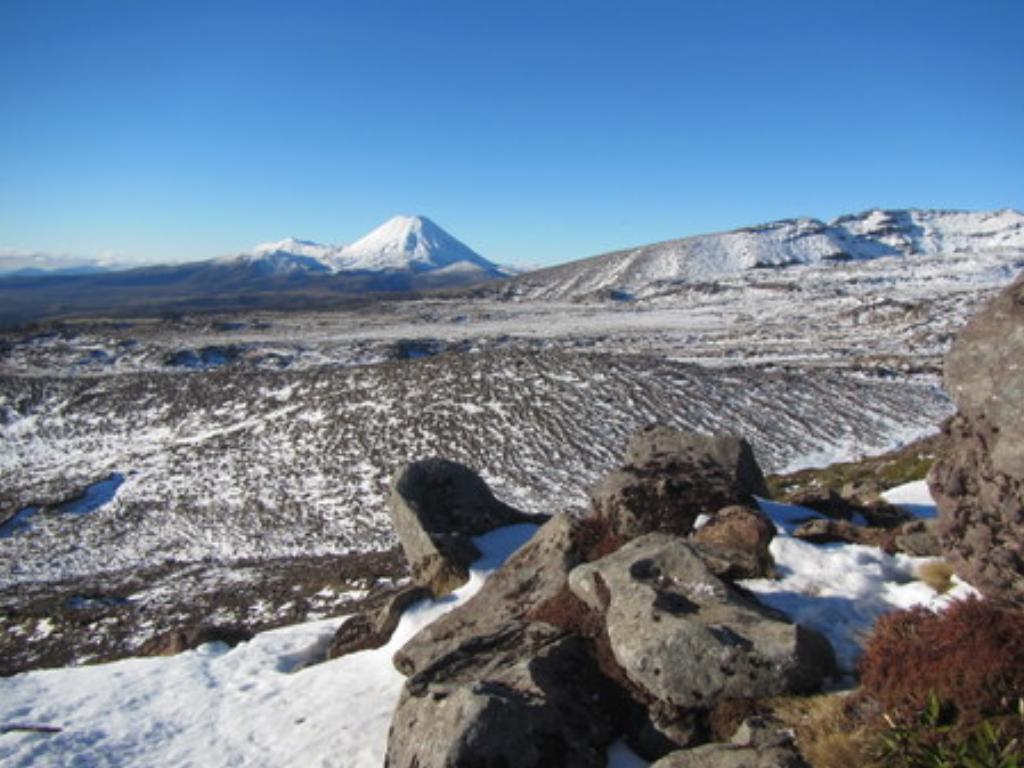 The trip commenced Friday 1 June at Whakapapa around 1.00pm with clear blue skies. We took the Silica Falls route from opposite the visitor centre, following up a bush clad stream with creamy white deposits covering the bed of the stream. Within half an hour we emerged out of the bush into tussock country and a rest stop at a lookout over a small waterfall. From here we took a route over country up the waterfall, over scoria and tussock as a short cut to avoid the walk up the Bruce Road. It took close to an hour to rejoin the RTM track higher up and just on the snow line. Not too sure it was quicker.

We climbed higher thru soft snow and rock heading south to the massive Whakapapaiti valley feature. The weather was fine and clear with great views of the mountain and Ngauruhoe and Tongariro to the north. We dropped down off the ridge to meet the hut track which deviated off the main track down the valley 30mins to the hut. This track was on the sunless south side and presented ice and hard pack snow. We picked out way thru on the bits of softer snow. All up about 3.5hrs to the hut. 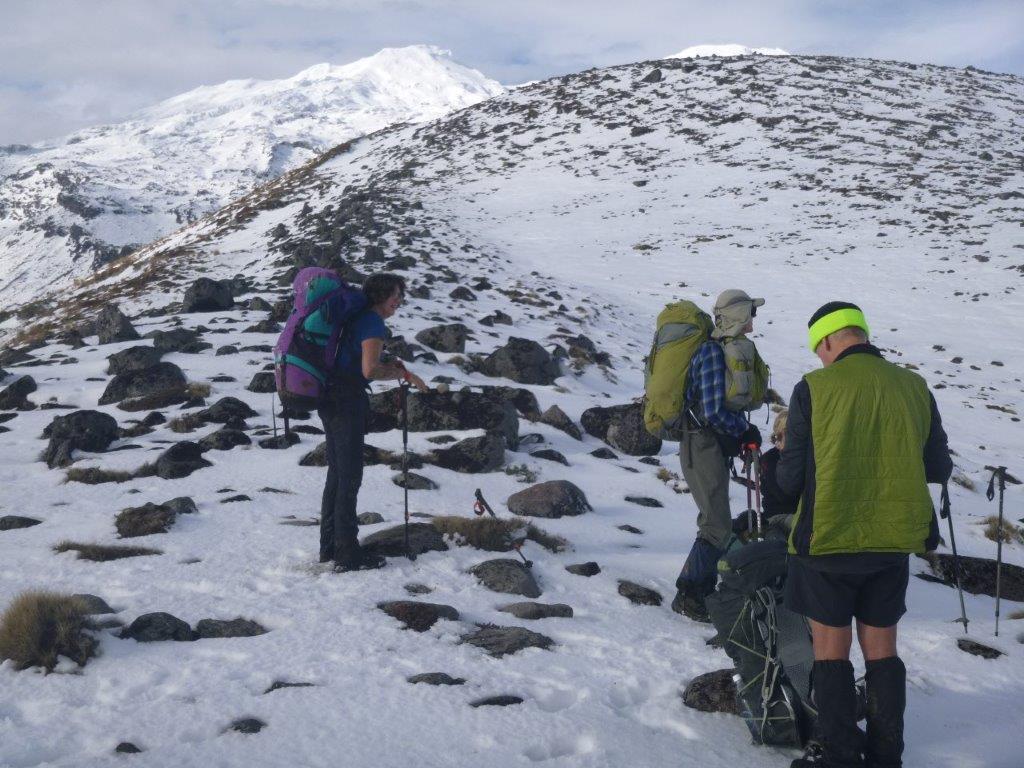 The hut only had two residents and the fire was going and warming. All the huts had good supplies of firewood and an axe, so fire making was a breeze. We settled in early for the night and were woken at 9.00pm by a group of six - two dads and 4 young children just arriving. Willie got up and finally persuaded most to sleep inside the hut in the relative warmth.

Next day was equally clear and crisp, up the 30 min track to the RTM track and up and down thru 4 or 5 small steams thru the valley floor, finally climbing out of the valley floor to around 1400mm, finding hard wind blown snow with ice wherever water had ponded. We had three more larger streams to cross, each one with a drop and climb out of, the start of three major water courses out to the west. Again we found the south side of each valley frozen and cold, but always managed to find some softer snow or careful climbing to avoid the ice.

At midday we met 3 trampers coming from the south who advised that crampons would be needed for the trip into and out of Rangipo hut. Not great news as we were not carrying them.

By 2.00pm we were on the ridge at 1520m into the massive Maugaturuturu valley and could see way in the distance the Turoa road and the climb thru the cascades. The poles stretched way down the valley into the bush and towards Lake Surprise. 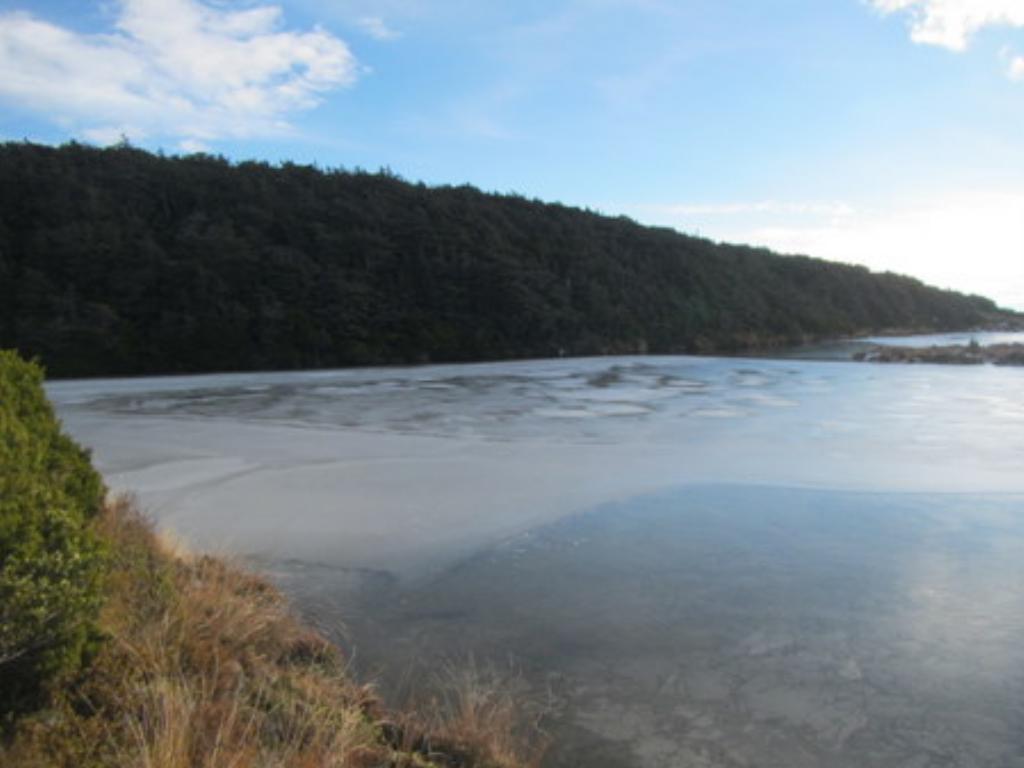 The track heads down a ridge with high bluffs to the north into the valley floor so no short cuts here. At 1400m we were back into the bush, a mix of bog and good track and popped out at Lake Surprise, a small lake with plenty of ice cover. Down to where the track could drop thru the bluffs and into the valley floor at 1300m, very icy and then turned east up the valley for 800m to the Mangaturuturu hut. This was a quaint 10 bed Whanganui club hut built in 1958, solar lights and all. All up approx 6.5 hrs to the hut, an hour longer than the DOC time.

The hut had 6 residents and a warm fire going. Three of us got beds and two spare mattresses were used on the floor overnight. Tony opted for his own mattress near the fire.

Decision time for the team, do we press on given the icy conditions or find an alternative ?. Tony used his Garmin Insight device to contact Keith at the club bus sitting at Whakapapa. Could he collect us from the Horopito Rd end next day at midday ? Yes came back the reply, and the alternative plan was agreed.

The day was cloudy and the forecast was for rain. Down the river bed half an hour, cross the Mangaturuturu stream (the biggest of the streams on this trip) and up to the ridge beyond thru the bush. We had 1 hour of great travel down the ridge, the forest gaining height all the way. As the trail flattened the track became boggy and slow. Another hour trudging thru the bogs and finally onto a hard and fast forestry road. The country opened out into farm land and a further hour’s walk to the road end. 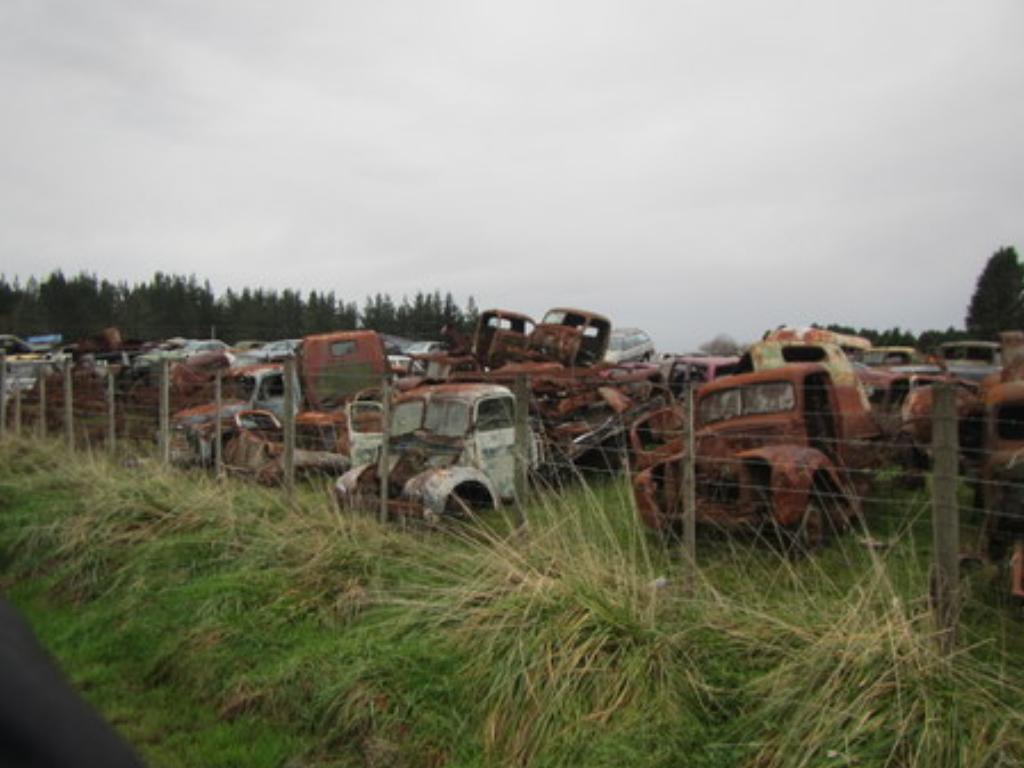 The track was not marked at the road, in fact we walked thru a farm house property and builders yard. A big existing sign on the gate identified Lahar Farm. Keith had not found this and was sitting at the road end wondering where the tracked exited. We walked down the road past the famous Horopito wreckers yard and called Keith to collect us.

Back to Whakapapa and a night in a warm cabin and a shower.

Jane and Catherine decided to go home and the remaining four of us opted to walk to Waihohonu hut overnight.

Monday we woke to misty rain but it didn’t come to much till an hour from the hut. Up the hill and down to the top of Taranaki falls. The track is well graded and gravel all the way to Tama lakes so fast travel. A pretty good tourist track with quite a few making the well worth while trip.

A tiki tour to Tama Lakes lower lake 20mins off track and then up to the high point at about 1300m. Ahead was a long walk down the stream, with tussock as far as the eye could see, the stream growing with every tributary - such clean fresh water. The tussock turned to landscaped shrubbery of grasses and hebe and heather and finally beech. The rain set in and we looked a bit weather beaten by the end of the trail. Another tiki tour to the old hut and reading of the wonderful history boards by the hut.

The 2010 Waihohonu hut was new for me and it was a surprise at the opulence of the structure and the setting. The large windows to gaze out on Ngauruhoe and the wonderful beech and landscaped scene. Big and spacious, solar lights, fire wood and burner and gas and solar hot water in season.

Again a few residents and a warm fire going. A bed for all here and dry clothes next day.

Tuesday was the reverse route, threatening rain to start but ending in sunshine. We took the lower Taranaki track past the falls and the delightful stream back to the Chateau, 3.5hrs so a fast trip.