One-and-a-half members of my group were in my bad books, so I wasn’t in the greatest of moods when I set off in Big Blue for Makahu Spur carpark on Friday night. Driving the bus proved very therapeutic though, and even with the impending inclement weather, it was great to be off on another long weekend expedition. 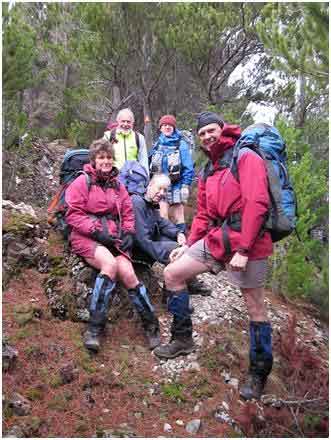 Our fit party of six set out for Mackintosh Spur, our tramp slightly marred by walking past the entrance gate and heading off in the direction of Napier. This error was in the first ten minutes. A quick retreat and on to the right path which was a muddy plateau track until a very steep descent into Donald River. It is a very narrow gorge and would be impassable in flood. What a climb upwards! Slow and grinding, but at last we reached the tops with very, very strong winds. It was hard, slow going and our intended destination of Back Ridge was unrealistic with darkness at 5.00pm.

The Studholme Bivvy side track was very well marked and plan B of Studholme Hut was agreed upon. The lower bivvy has recently been done up and the track upward is well marked. The hut has four bunks and has been recently relined and insulated. No fire needed. After a very hard day in the wind, the six of us were glad to have arrived. Ian was particularly tired and fell asleep sitting upright in his bunk clutching his hot drink. The radio was erected but, alas, the main wire detached from the centre. Tragedy, no communications! Wait - not one, but two mad scientists (Brent and Tony) made a temporary fix with tape, plastic and blood. Success, and we managed to talk to the others, most of whom had changed their plans due to the bad weather.Ian had us in fits of laughter quoting some of Prince Philip’s gaffes. I fell asleep chuckling, just as I remembered I’d forgotten to be cross the whole day. 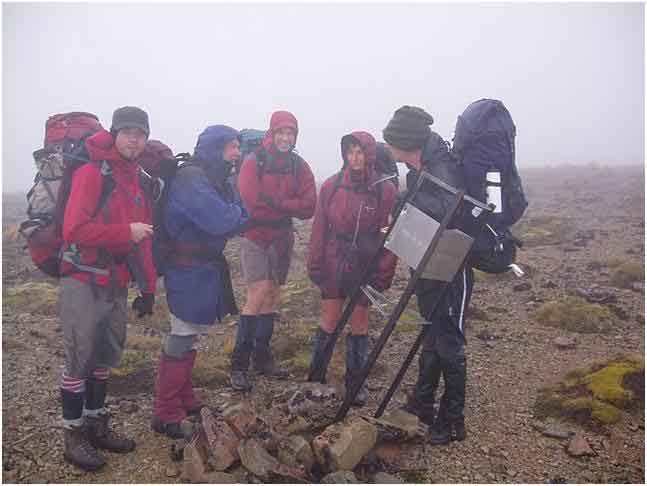 Sunday was back up on the tops, still strong winds, but not too gusty, and bearable. We all followed tradition and put a rock on Kaweka J. The pile gets higher. Very good signage although an unexpected warratah off to the right confused me and I almost had my group descending to Kaweka Flats. Sort your navigation out, Leader! Out came a GPS and we were onward north. It was still windy, but not unbearably cold along the tops. Ian kindly shared a large bag of chocolate nuts, which Max accidently dropped in the grit. We experienced an extra-crunchy taste of sand and nuts. Brent wanted us to try some similar-sized darker objects on the other side. They were declined as being too fresh, and possibly still warm. Ahead into the wind and light rain, then down to Middle Hill Hut. It was a plush facility with an enormous veranda and six bunks. Comfort plus. 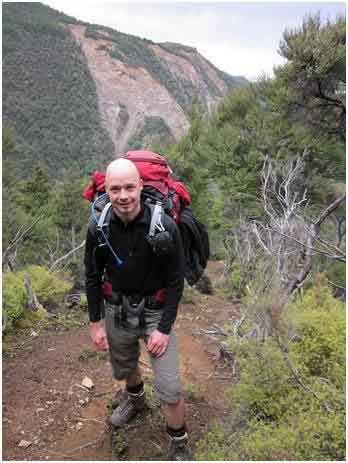 We were just settling in for a peaceful night when thunder hit and 10 students arrived. They appeared to be pyromaniacs and had a roaring fire going whether needed or not. A very hot night, but better than freezing outside. Rene chose to sleep out in the cold. A tough, honorary Cantabrian.
I was cosy in a top bunk, but what was I cross about? Struggled to think. 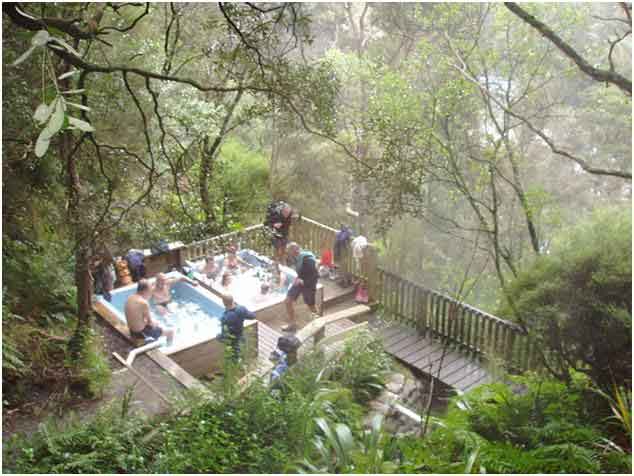 Monday was a short hour-and-a-half out to Pinks Rd end then a road bash to Mangatutu Hot Pools. The other groups hadn’t come out yet from Te Puia so I had a divine solo soak in the surprisingly hot, clean and clear pools while Brent drove back to pick up the stragglers. Then off down what seemed like thousands of steps to the Upper Mohaka River, recceing for a kayaking trip in November. The others strolled out and I had my second luxurious soak. Blissful. Some of my best friends were with me and what a warm harmonious way to finish a long hard tramp.