hursday - Having left Auckland on the stroke of 2pm, we arrived at the road end and Comet Hut (880m) well past 10pm to a fresh and chilly breeze. 3 hardy souls dived into the scrub, 3 less hardy (and somewhat less vertically endowed) took to the van seats, our esteemed president claimed the caged luggage space (I kid you not), 4 softies snaffled the bunks, and the other 4 hit the floor. Sorted. Zzz...

Friday - Away at 8.15, an immediate 200m climb followed by an easy section through alternating pine and beech forest brought us to the spur leading steeply down to the Taruarau River 700 metres below. From a stop half way down we traced out our route up the other side - a mere 400m stiff climb. There were great camping spots either side of the Taruarau, which was flowing knee-deep and easily crossed, then a short climb and sidle brought us to historic Shute’s Hut, our destination in 2 days’ time.

A quick butcher’s, then onwards and upwards, stopping for lunch on open ground with extensive views back across and up the steep sided valley. It was easy to identify the spur we had come down - it was the only one without a massive slip.

A somewhat awkward sidle next on a rough and narrow track, then 350m steeply down to our destination for the night, Koau Stream. Superb camping here on dry moss and grass under the trees with a peak up the valley and views across the river to steep slopes and 2 large slips. With space for a battalion, the fear of insufficient camping here proved groundless. Simon erected his mansion up the hill, Rob and Fay headed down to the dormitory suburbs and the rest of took the middle ground. So it was that after the radio sched Camp Koau settled down to a blissful rest on a beautiful, calm Ruahine night. A 6¾ hr day.

Saturday - An easy crossing of the river, steep 200m ascent, more gentle climbing and we had passed above the huge slips we’d studied the previous afternoon. Shortly things levelled off at a pan amongst the regenerating forest. "Baaa" we heard, and "baaa" again. And out trotted a magnificent white billy, fixing us with a steely stare for a couple of seconds before losing interest and disdainfully trotting off back into the scrub.

More easy climbing, steeply down and out of another stream, another short stretch and we were at Ruahine Hut for lunch. The two resident hunters were expecting us, had the chairs out and put the billy on. They were good company and a good laugh, but with slippers and hot water bottles in evidence you had to wonder if they weren’t there more for the reminiscing than the roar.

By now the wind had really picked up and we were facing a good 10k uphill road bash into the teeth of it. Nobody’s highlight of the tramp I wouldn’t think. Somewhere we passed the famous Leesong monument that all 8 of us somehow managed to miss. Finally into No Man’s Hut (1300m) to find Catherine waiting for us. Sensibly, she had abandoned the fast n furious lot.

A quick recce further up the road looking for better camping revealed it was more sheltered around the hut. The wind continued to blow that night but we had minimal rain. 8 hours. 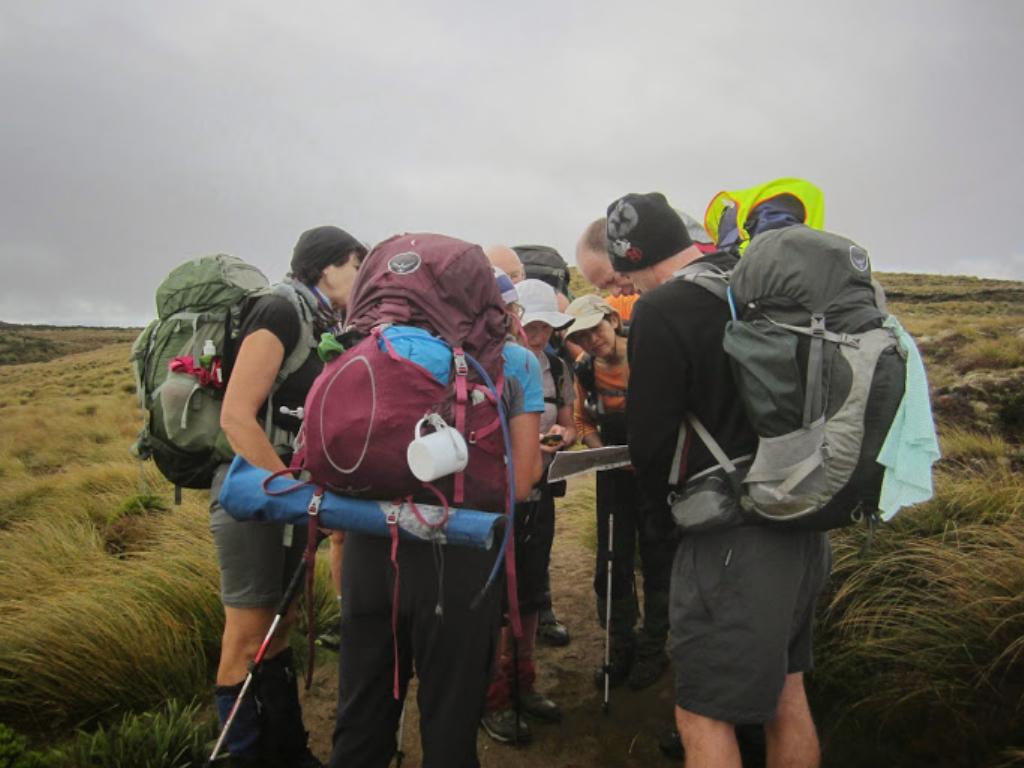 Sunday - The day dawned grey and cloudy, but the wind had dropped - just as well as we had a long day on the tops today. The 4wd track soon ended and the route became less clear as we looped around a stream across featureless open tussock. In a whiteout this would be challenging navigation. The track improved and those out front charged off, only to start descending when we were supposed to be staying on the tops. A halt, review, backtrack, and agreement on the desired direction. Then a cairn was discovered buried in amongst the tussock indicating the turn we needed. This we repositioned to be more easily seen, but apparently not well enough as the fit n flashy group also sailed on by later than day it was revealed. Perhaps they collectively blinked as they sprinted past.

We now had 10k travel along the tops, parts easy going in open country, at times bashing through scrub, others negotiating pockets of beech. The occasional cairn and an intermittent ground trail were our guides. Some great views to the west and NW were enjoyed, and we lunched amongst the tussock at point 1198.

Past the turnoff for Taruarau Biv things improved, with a more distinct ground trail, more waratahs and clearly marked sections through the beech. Down a short slip, along a wide cut track through scrub, then we were heading steeply down to the hut.

Later, just as the aerial was going up, the fanatical n fearless group arrived. It was immediately obvious why we mediumites weren’t in their group - we aren’t good enough actors to feign freshness after a tough 10 hr Ruahine workout like they can. After a chat they headed off for better camping ½ hour away down at the river. 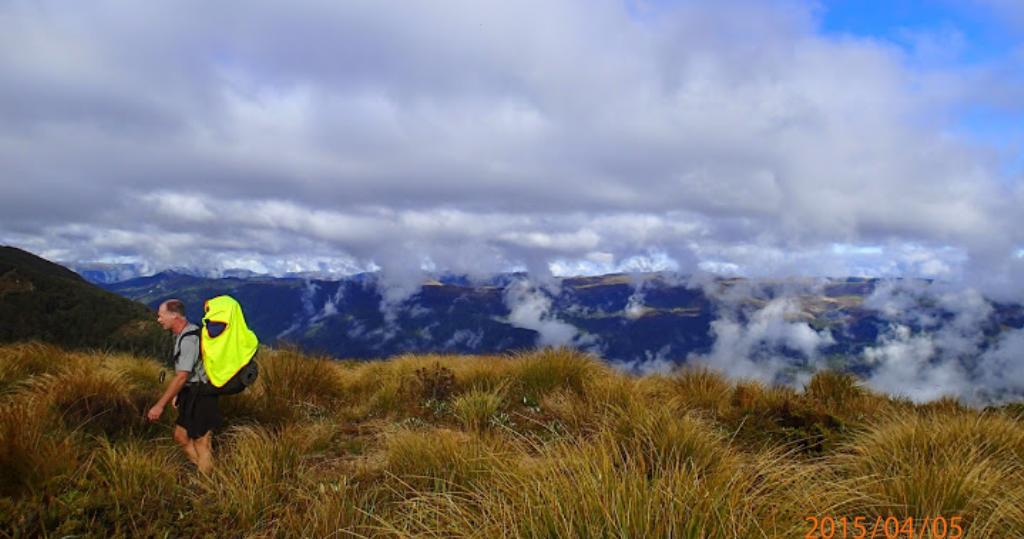 Over dinner we discussed the daylight saving adjustment. Isn’t it amazing that despite doing this twice a year for yonks, it’s still next to impossible agreeing which way to move the little hand and whether that means it’ll be lighter earlier or later. Finally we reached agreement, and watches were synchronised.

Shortly before dark the resident hunter returned. He was Ruben Sanderson, whose father was good friends with Wero, the owner of No Mans land and No Mans hut. Ruben's Dad used to take his boys to Shutes hut for hunting trips, and to spend time with his friend Wero. Ruben buried his father's ashes at Shutes hut under the rock by the door 4 years ago and returns every Easter. A 7½ hr day.

Monday - After a peaceful night we were startled awake by the not quite dulcet tones of one Mike Hare booming out over the valley in the dark. Several moreporks fell from their perches. Time to get up he announced. Except he was an hour early. Trampers, eh. Ruben must have been shaking his head in his bunk.

Back now the way we’d come - down to and across the Taruarau, up that unrelenting 700m climb, and all back at the road end by 10.50am.

This was a great trip, thanks to Rob for his skilled and relaxed leadership, Dennis and Simon for help with the route finding, the weather for being kind, Fay for her boundless energy and infectious enthusiasm, everyone for their humour and good company.