It was a great act of faith - and trust in Metservice ( the same thing ? ) for us to leave on the morning that a major tropical cyclone was bearing down on the North Island. People were being advised not to travel, the Harbour Bridge was about to be closed ... but the ATC Bus departed despite all that at a cracker 7.30 am on the Thursday before the Easter rush.

Certainly the new Lake District through the Hauraki Plains was startling, even before the onset of the forecast deluge, but as predicted we kept ahead of the storm as we drove south, collecting up our stray trip members Margaret and Tina along the way, and then leaving one of our drivers - Marilyn Best - in Taihape for a relaxing weekend there. 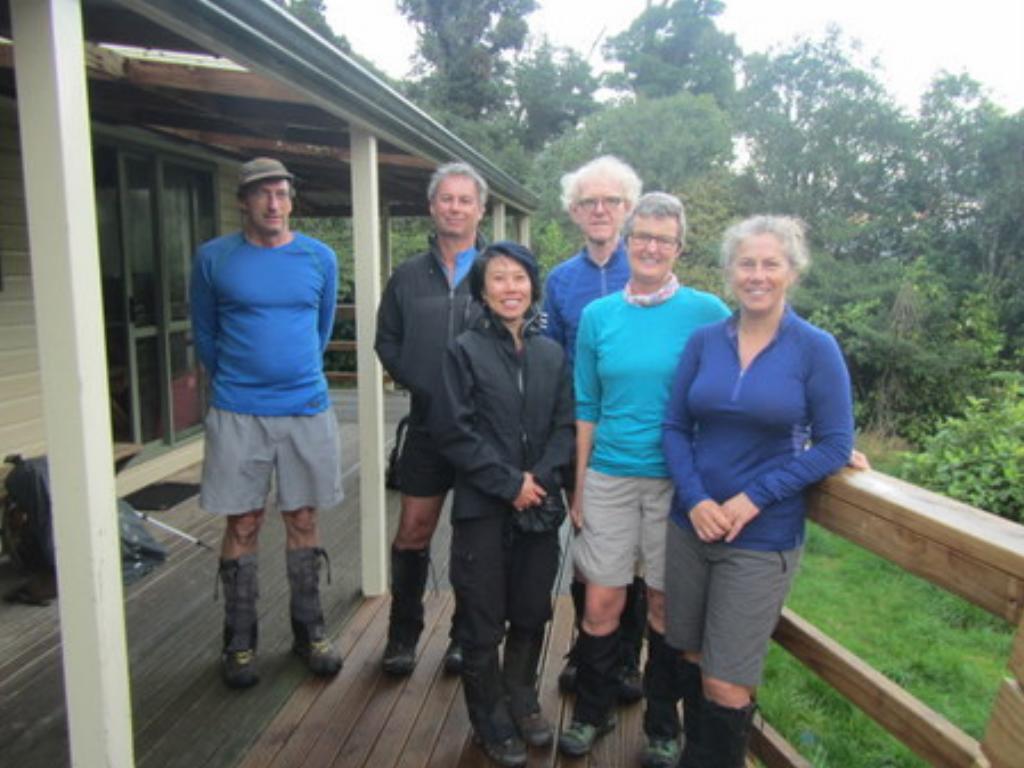 Two parties out of three opted to depart the bus at the road end around 4.30 pm, and after a short walk reached the comfort and shelter of the Alice Nash Memorial Lodge before the forecast heavy rain and wind arrived. The hut is a very comfortable one maintained by the Manawatu branch of the NZ Deerstalkers Association. Two very considerate hunters were in residence, and were already pleased to have shot a deer nearby earlier in the afternoon. 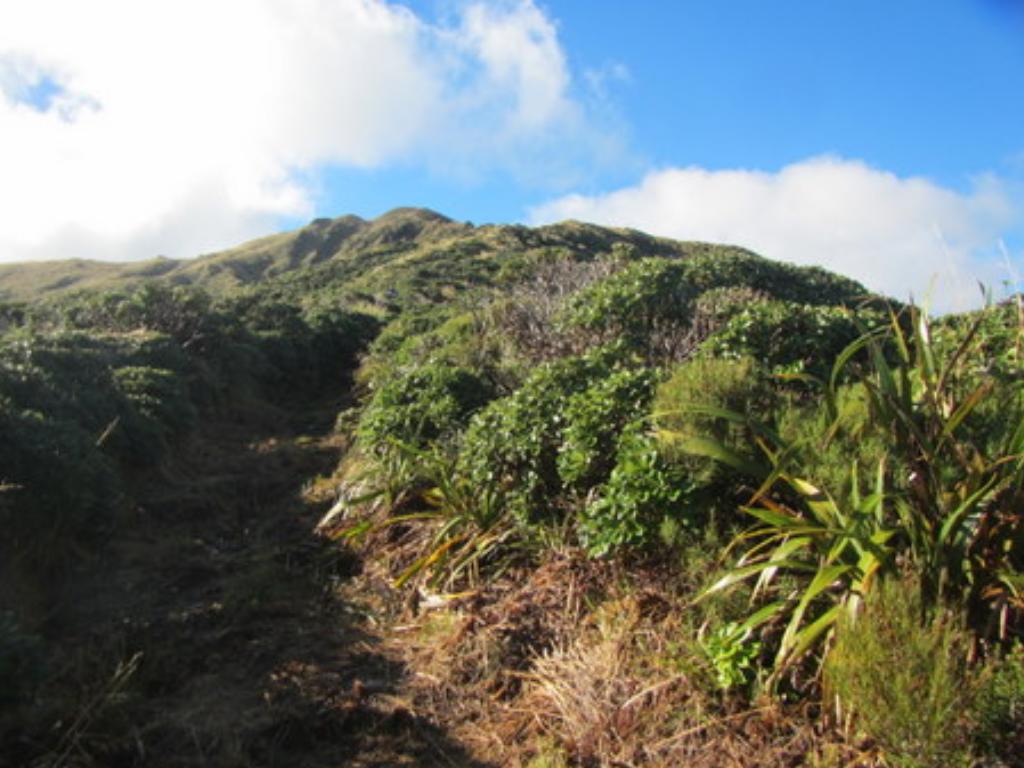 Friday dawned clear, which was great news, as ahead of us was an 850m metre steady climb up to Tunupo, the highest point at 1568m on the Ngamoko Range. We really appreciated the great track clearing work done by a DOC gang recently - they obviously didn’t want to come back for 2-3 years as vegetation was cleared to well over a metre wide. Once out of the thicker undergrowth into tussock etc, it was really obvious where they stopped work, because the tussock and other vegetation closed in around us, making for a slower rate of progress. 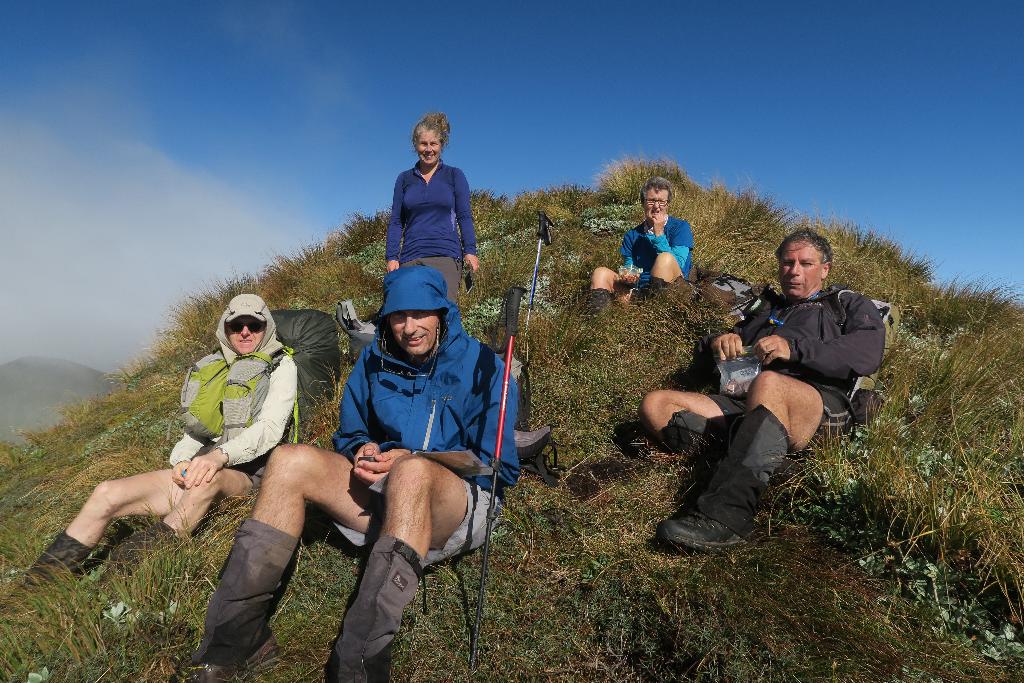 Nevertheless we soon enough reached the top for a morning tea stop with views back over the Manawatu, and out over the southern Hawkes Bay and the east coast in the far distance. 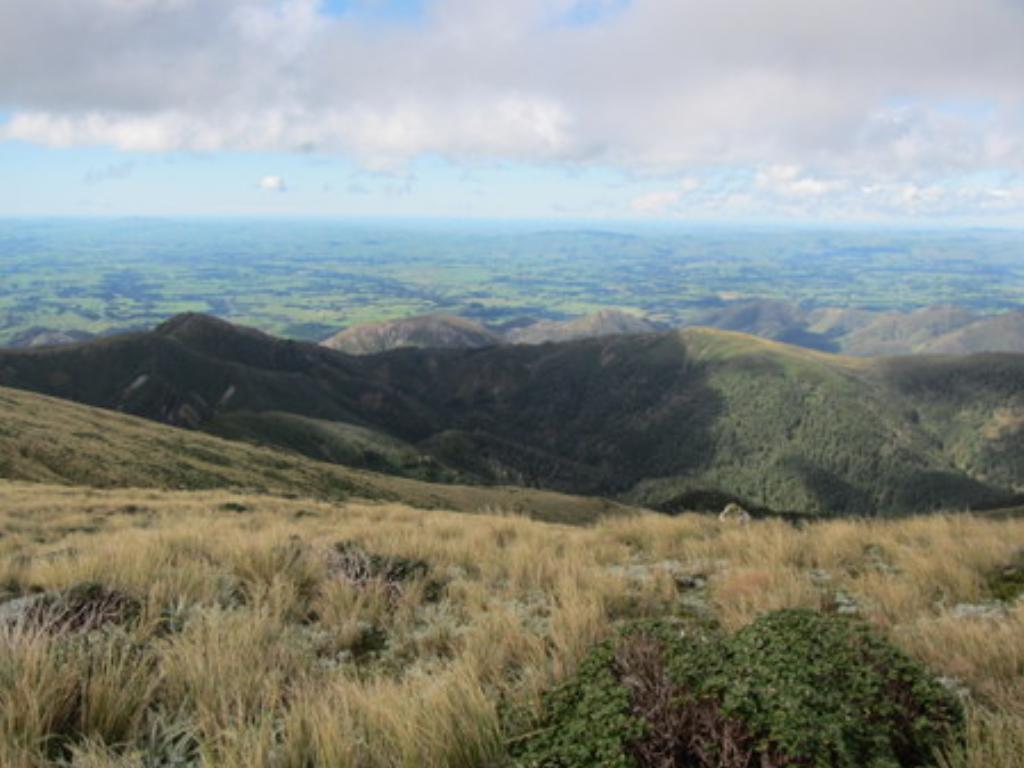 From there a pleasant stroll north along the range - mostly clear with some clouds wafting over the range further north. But not of concern to us, as we were heading down into the Pohangina valley 550m below for our scheduled overnight at Top Gorge Hut, with time for a leisurely lunch stop before we descended into the trees again. Quite steep and a bit overgrown going down from there - someone said they were glad we weren’t coming back this way ....

Top Gorge Hut is classified as a bivvy - although the hut is of a good enough size, there are only 2 bunks / mattresses. The river was pleasant enough, although discoloured and obviously higher than usual when we crossed it just before reaching the hut. Plenty of camping nearby, so 3 tents were erected and 3 people stayed in the hut.

Today’s challenge - having already decided that heading upstream and working our way around some gnarly waterfalls was not our cup of tea (especially now with the river up a bit), was to find the "Old Hunters Track" up to the track on the ridge running above the true left of the river.

No markers were found, the hut book was not too encouraging, so Tony set off exploring up the hill behind the hut quite optimistically because of the open bush with an easily navigable grassy slope .... until the bush closed in, the leatherwood blocked easy progress, and the going was very slow even with no overnight pack to get caught as you squeezed through tight spots.. Persisting with that for a while allowed some progress to be made, but in the event it was to be a hopeless task, and not something the rest of the group would appreciate the next morning. Sunhat lost forever somewhere up that hill and a few extra scratches as a result.

The most reliable option for the next day was to return back up the 550m to the Ngamoko Range, and head along the tops through to a suitable destination for the night. It was just 2 hours to the top - into the cloud and wind, and out with the storm gear ... because on the tops the mostly clear yesterday had become a gale force today. Quick decision - get out of that as soon as possible, so off we set at a good pace assisted by the wind towards Longview Hut. Despite the wind, it was easy enough walking along the tops, but a less than pleasant surprise was in store for us as soon as we hit the track that starts down towards Longview - a rutted muddy slippery mess of a "track".

But this was the way towards shelter from the storm, so down we continued, arriving at the hut by early afternoon. Bunks scored, we settled into weathering out the frequent heavy rain showers, and providing a rousing welcome ( No room - go home ! ) to Terry’s party when they arrived quite a bit more drenched than we had been.

And the fun did not stop there - more and more people came up in the miserable weather from the eastern road end, meaning the estimated number of hut location inhabitants by the evening was around 30+ for an 11 bunk hut - couldn’t count them all because some claimed the woodshed, some the lean-to on the side of the hut, and various other, ever moving, bodies slept on the floor and on benches. Four sensible hunters - they took off back to their vehicles for a beer or few and takeaways for the evening.

Setting up the mountain radio aerial was a challenge again (the previous evening it involved a river crossing). This evening it needed full wet weather gear was so as to embark on a wet scrub bounce / bash exercise parallel with the front of the hut. And at 6.20 pm after the sched with Keith’s party it was now mostly dark, so even less chance to see where the feet were landing !

The full hut required some careful coordination of gear and preparations for an efficient getaway in the morning. Too late Tony realised he had tipped his Backcountry Malaysian curry into his rehydrating dried fruit instead of the similar package containing muesli. After removing almost all of the curry, there were only a few stray pieces of crunchy dehy left to liven up the morning’s fruit and muesli .....

The weather had cleared by morning, and the night had been quite long, so an earlier start than needed happened due to Tony getting up early for a comfort stop and the rest of the party instantly bouncing into action ! 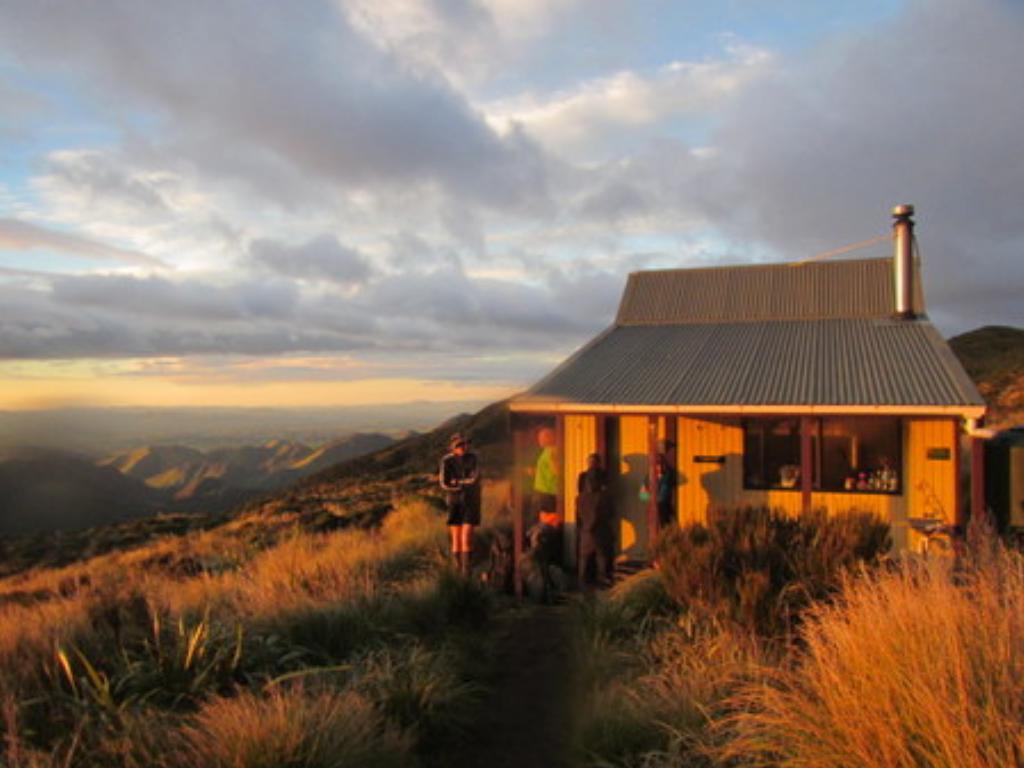 Back up that muddy "track" - easier to go up than down, so we were soon on the open tops again on another clear day with no wind on our few hours of doing an almost complete east - west traverse of the Ruahine Range ... at this point it is quite narrow..... 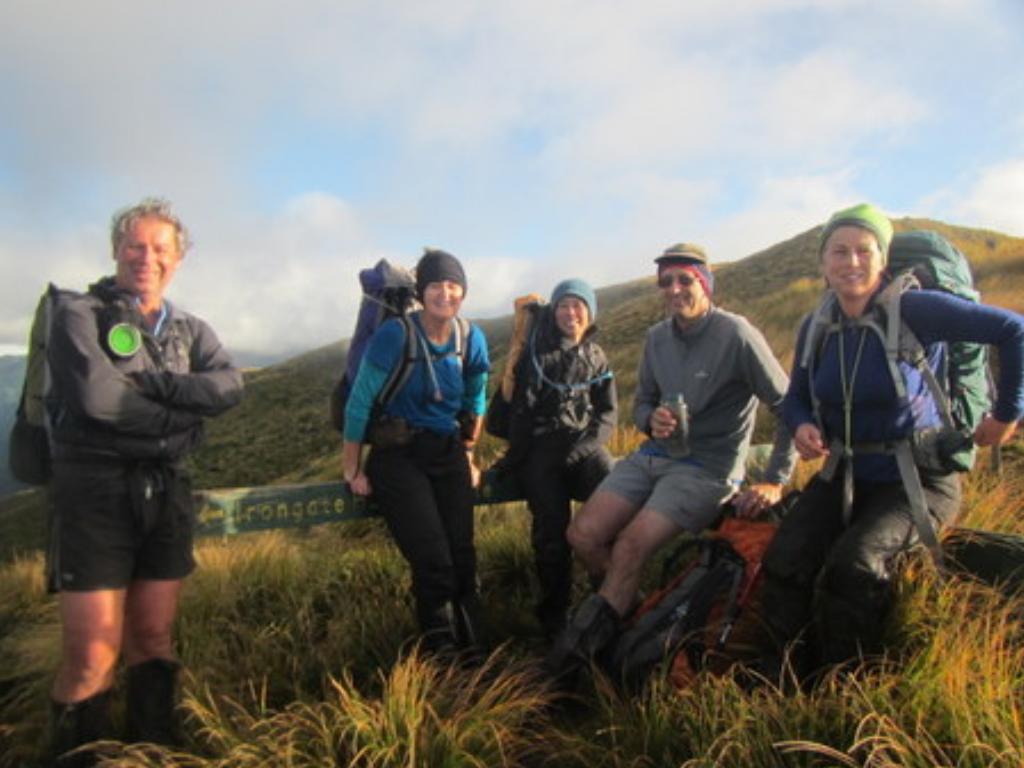 The party was now on a roll as we headed on what ended up as the mission to have an early lunch at Iron Gate hut on the Oroua River.

As we descended from the tops on the Iron Gate track we again hit the point where the track clearing gang had stopped work, to find another very pleasant route cleared to over a metre wide.

With wonderful trees, moss and sunshine as we worked our way leisurely towards the final steep scrambly drop-off section that deposited us at the hut. 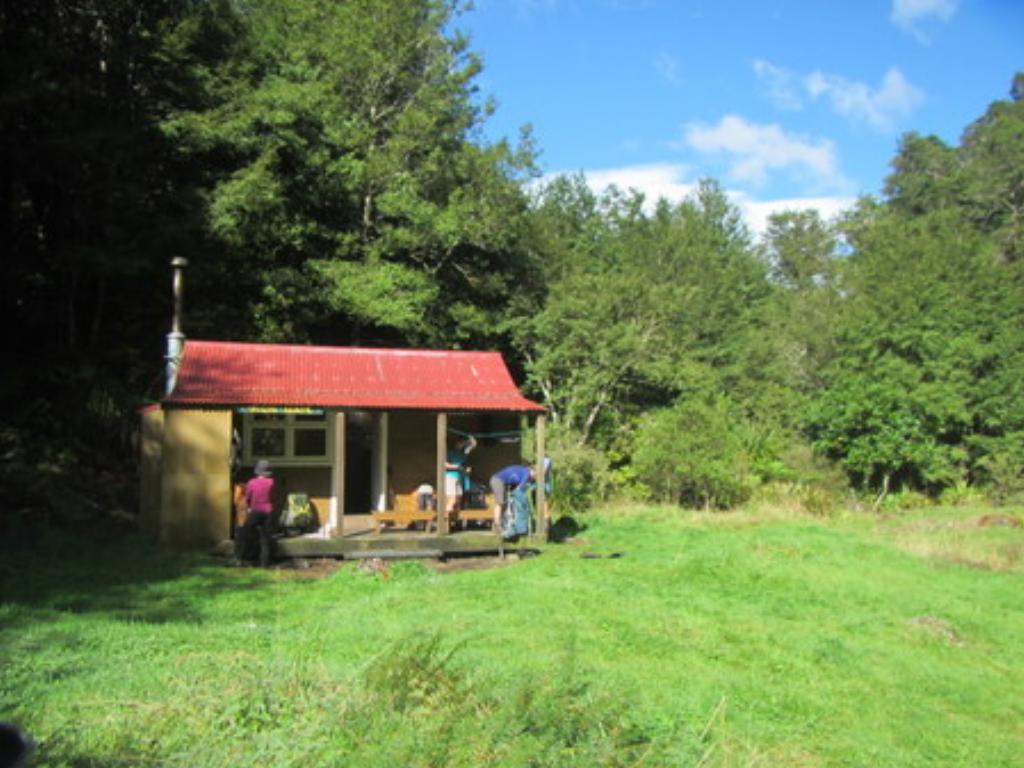 Given the plans of the other groups and the Monday forecast, we set off along the track down the valley back to Alice Nash Memorial hut - easy enough- except for the tediously frequent steep climbs up and down bluffs and across side streams.

We arrived in a super fast time just as the heavens opened. Prompting Catherine and Michelle to erect their tent on the generous deck, in an expectation of a full to overflowing hut that night, since all ATC groups had now arrived. In the event there was plenty of room to spare as some returned to the bus, some went to the campsite beside the river, and two others put their tents up on the grass nearby.

The next morning had everyone back at the bus before 8.30 am, and ready for the 8 hour drive back home.

Our party were Catherine Doyle, Mark Abela, Michelle Martin (new member - great to have you along), Ming Lo, Robin Houston (front leader), and Tony Walton (rear leader, scribe, hat now replaced). Thanks to our drivers Keith and Marilyn for getting us there and back safely.