Margaret worked her usual magic, choreographing a complex exercise to allow us to visit Mt Hikurangi, on the far east of the North Island. Nevertheless I flew off from Auckland to Gisborne in trepidation that something unforeseen would scupper all our careful plans to visit the first place in New Zealand to see the sunrise each (fine) day. Would flights be grounded, would cars break down, would the roads be closed ... the list could go on and on, but in the event everything fell into place, and we all had a very rewarding time in what for most of us is an infrequently visited part of the country.

It was a sobering moment at Auckland airport to see the mass of people in the middle of their travels observe the two minutes’ silence in respect for the victims of the terrible Christchurch mosque attacks. Airport operations were challenged to suppress the automated flight announcements, but soon even those fell silent.

The van pickup went to plan, with Lee McKay being our careful driver for the weekend, and Christine and passengers arrived in plenty of time for us all to head into Gisborne CBD for a quick dinner, before heading north towards Ruatoria. We arrived at the agreed spot with not long to wait for Martin and his passengers to arrive, before we drove into the grounds of the Kariaka marae for a friendly welcome to the visitors’ whare by Dan Kawhia. Mattresses laid out on the floor, a well stocked kitchen and even a cosy store room for Kay to choose to sleep in.

Saturday saw an early start, and as a real bonus, from the marae grounds we could see the twin peaks of Mt Hikurangi. The drive up the valley was interesting for the number of cattle spread along the roadside and the sheer width of the riverbed of the Tapuaeroa River and side streams - in flood these must be an amazing sight ... best seen from a safe distance. And ever present ahead of us was Mt Hikurangi, with a few wisps of cloud appearing from nowhere. The road was mostly sealed up to the last bridge on the main valley road, and there were no fords, so time to start updating all of our topo maps to the latest versions - Martin could easily have driven his car up to the Hikurangi carpark, rather than leaving his car in the care of Dan Kawhia.

The walk up the farm track to the carvings provided great views of the surrounding countryside, the mountains and back down the valley, with Hikurangi now disappearing into cloud for the rest of the day. But we were happy with it being a warm, but not hot day, with little wind and no rain. It was a steady 800m ascent to the Maui Whakairo, carvings installed for January 1st 2000 new millennium celebrations. Our Ngati Porou guide, Ngarimu, arrived via 4WD vehicle to provide an informative and relevant talk on the carvings, and on the distant and recent history of Ngati Porou, the local iwi for the area. 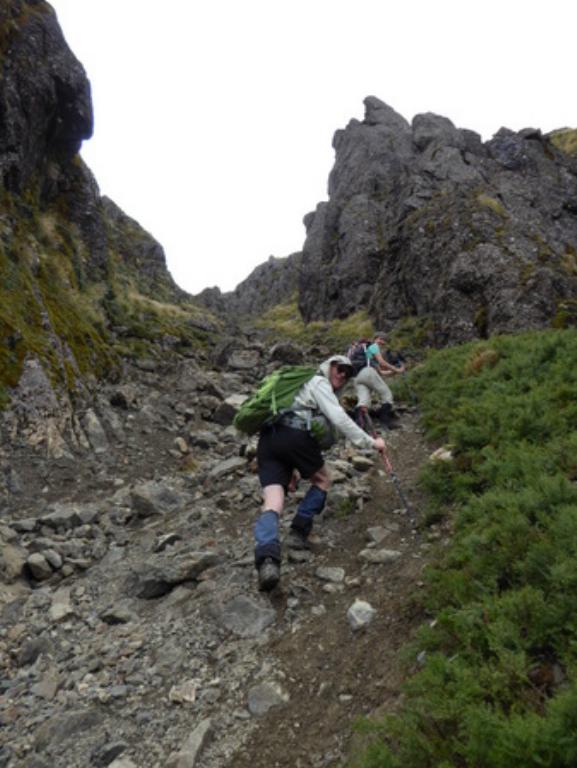 The nine free-standing carvings have a common theme of Maui, who is considered to be a primary ancestor of Ngati Porou. Ngarimu explained each carving in detail to us. The orientation of carvings, and the direction in which the central Maui carving faces, is the point on the horizon where the sun rises over the sea on New Year’s Day.

From there our group climbed up the hill, now on a tramping track, to reach the hut where we were to spend Saturday night. A short lunch stop, and then most of the party then continued up the steep section of track behind the hut, following a route well marked with white poles with colourful markings. After that initial steep climb we then passed through one of those goblin forests with moss covering everything, before coming out into rolling tussock lands as we worked our way around behind the mountain. 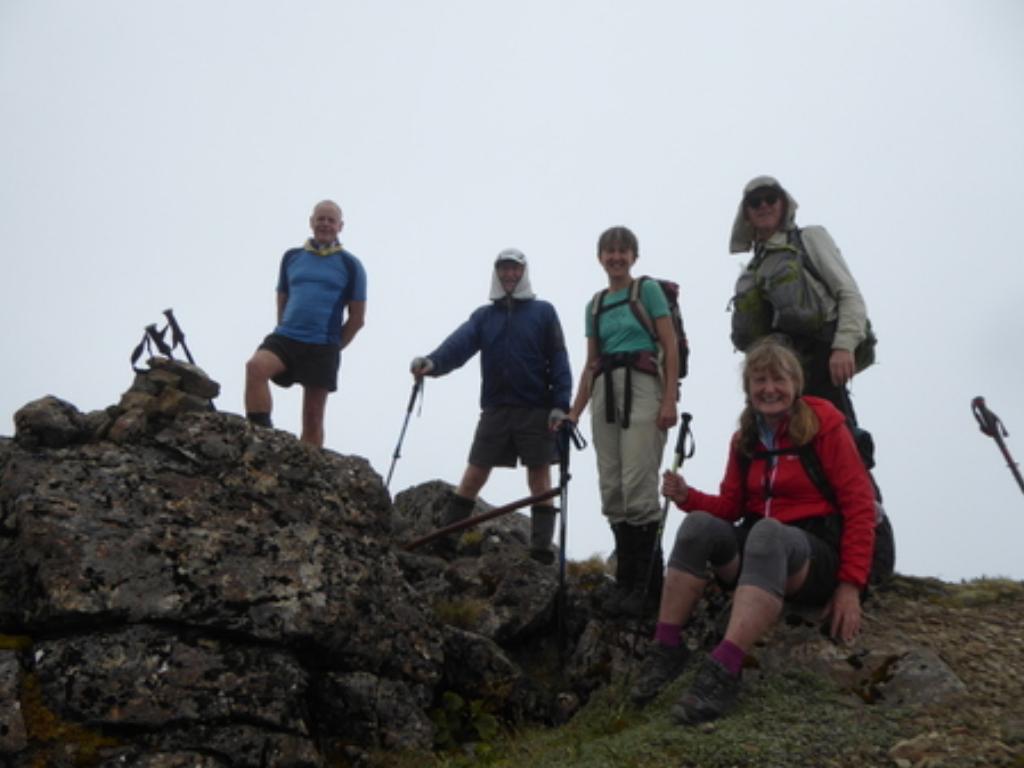 And so we reached the well described steep scree gut that is used to ascend to the saddle between the two peaks - a real scramble at times, although good sections of the ascent are on a rocky side track, rather than in the scree gut itself. Then time to rest on the saddle looking at the peaks above and the forest below waft in and out of the ever present cloud. 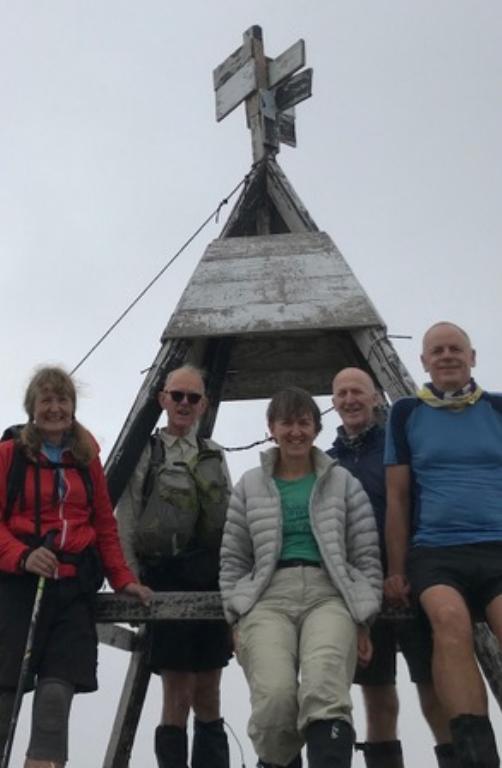 There are two peaks, each officially at 1752m, so we then set off in search of the northern, "female" peak - a little bit of scrambling and narrow ridge walking before reaching the top for a short stop, before returning down to the saddle, for a quick stop, before then tackling the southern "male" peak.

We stayed there for a while taking some more photos beside the trig point, before starting the slow descent down the gut to rejoin some of the group waiting for our return enjoying the views further west and south. Occasional patches of blue sky, but never a clear view of the two peaks. In fact, by the time we all returned to the cosy little hut around 5.30pm, the hut too was in cloud. 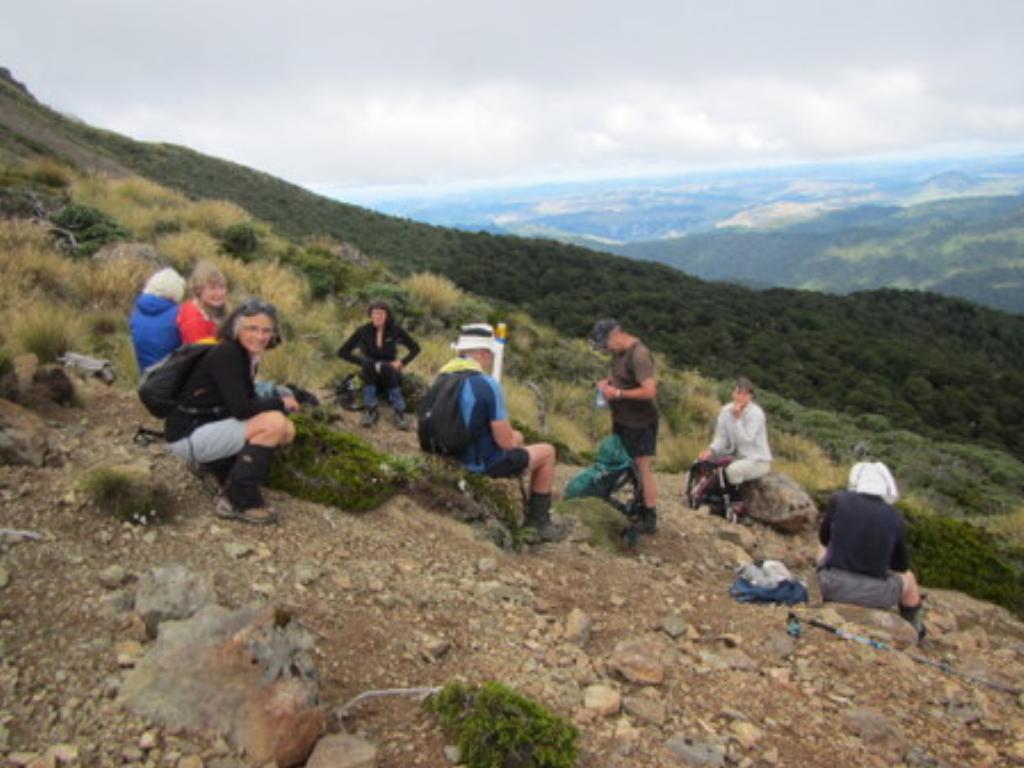 Overnight the cloud cleared and we awoke to a great sunrise underway, and what we could see of the mountain behind us was all in clear sky too. Some went down to the carvings, some went outside the hut, and others just kept an eye on it as they enjoyed a leisurely breakfast. Some great photos as a result.

Once we were all underway, the descent down to the carpark was rapid, and yet again, the cloud had crept back and covered the top of the mountain. So then a case of retracing our various journeys on our way home. The van crowd had time at Tolaga Bay for a lunch stop and a walk along the looooong wharf before returning home via Gisborne.