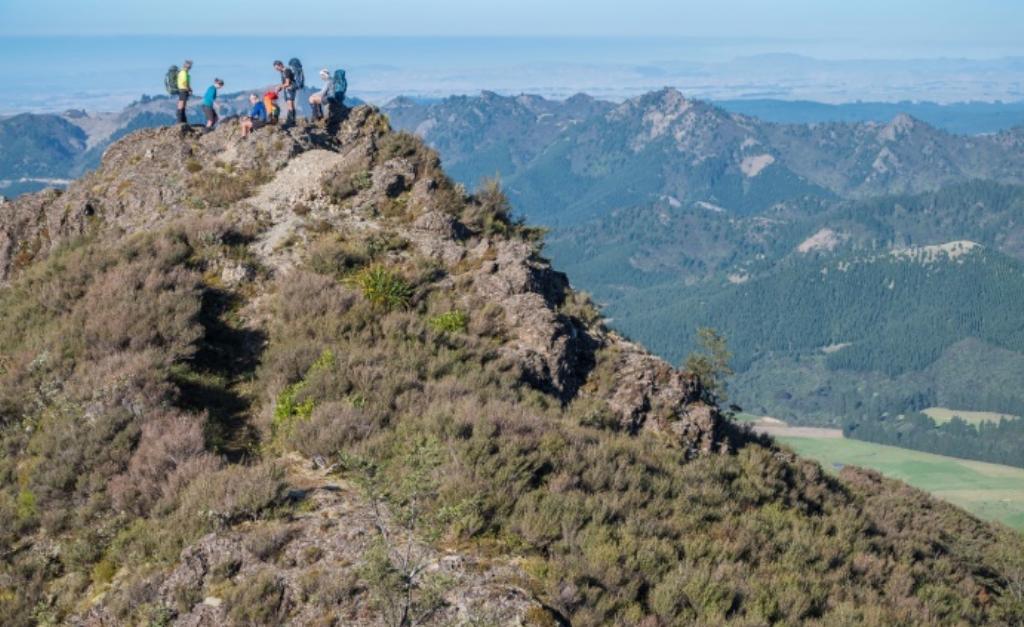 Rest stop on the way up from Sentry box

We were surprised to find the hut already occupied by ATC medium/easy group but this was not a problem.

We pitched our tents just before dark and got the jet boils going just before the temperature started to drop.

After dinner, we headed off to the hut to get warmed up and a bit of friendly banter before bed. A 3 hr day. 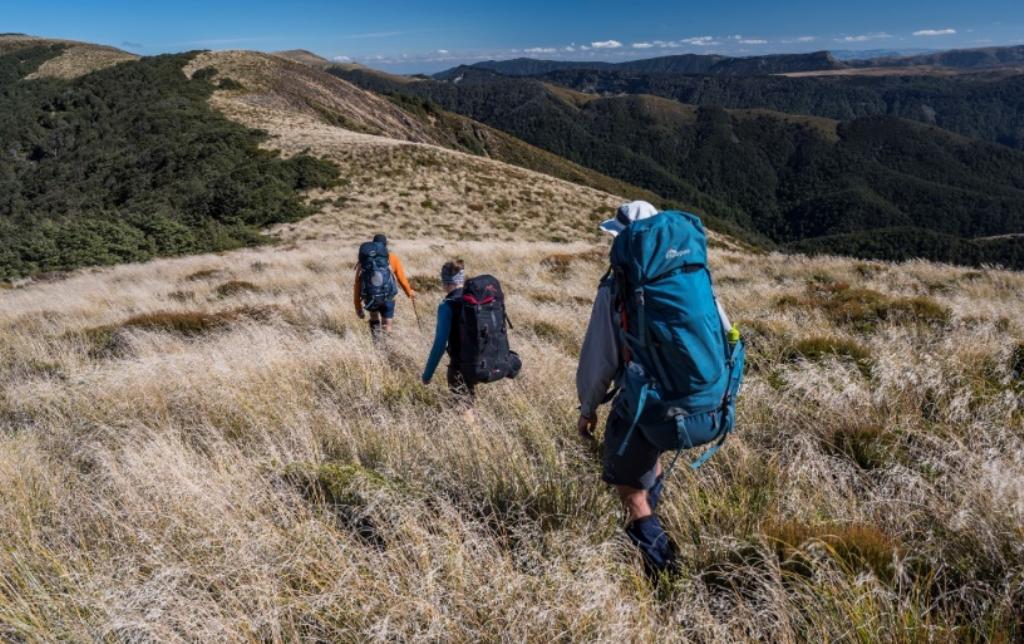 A beautiful day on the tops

Saturday 20 April: Returned to Sentry Box Track junction, headed north on good track past Pohatuhaha - some climbed Pohatuhaha while the others continued on slowly to Aranga Hut. The views from Pohatuhaha are well worth the short climb - definitely recommended.

Aranga Hut is now derelict with rotten floorboards and no mattresses. We continued on across the tops to pt 1396 south west over Piopio and turned north west over pt 1503 to pick up track to Potae Ridge.

We had been tramping for 8 hours with heavy packs and the team was beginning to falter as we climbed up to Potae Ridge. It was time for an energy boost in the form of a mysterious white powder, not sure what was in it but the pace certainly quickened with some singing (An East German propaganda marching song apparently).

We reached the Potae Ridge around 4.30pm and the sign said one hour to the hut so we decided to skip the rock formations and continue to Ruahine Corner Hut. The hut was a very welcoming sight, arriving just before sunset with the hut surround by beautiful yellow tussock glowing in the last rays of the sun. 10.5 hrs.

Sunday 21 April: At breakfast, we were pleasantly surprised to find that the Easter bunny had visited overnight and left us some chocolate eggs hidden around our pots and other possessions. Breakfast was enjoyed on the veranda watching the sun rise on another beautiful day.

We packed up and headed north along an old four-wheel drive track across a grass airstrip and then headed north again to an old sign post before turning west.

We followed a taped trap line down to river before climbing past a rock bivvy to Ohutu Ridge and then south west along Ohutu Ridge to the track junction to Waiokotore Stream. The 6hr sign to Iron Bark Hut was very concerning as it was 1pm and we had already been travelling for 6 hours.

We continued on down Ohutu Ridge to Whakaurekou River, then up river to Iron Bark Hut arriving at 5pm, much relieved to arrive before dark, 9.5 hrs in total.

We got the fire going, had tea and spent the evening playing cards.

Monday 22 April: We woke to light rain but not enough to have increased the flow of the river too much.

We started up river expecting a 3-4 hour trip to Otukota Hut after passing a bridge about half way up. We passed the new bridge shortly after leaving the hut and after 2 hours arrived at an unexpected confluence in the river.

After checking our location with GPS and consulting with our second navigator, it was confirmed we had gone past Otukota Hut by 300m - 400m. At that point someone said they had seen a large orange triangle but had assumed it was just a track marker so thought nothing of it.

We backtracked to the track leading to the hut, arriving at 10am just before the light showers turned to heavier rain.

We got the fire going, dried clothes, had an afternoon nap, played cards, had dinner, played more cards, all the while feeling very pleased to be in this cozy hut during the wettest of days. A 2.5 hr day.

It was a long climb up the track behind the hut to the bush-line, climbing over pt 1247 to Mokai Patea Range and then south to pick up the poled route to Rongotea. We were very pleased to meet the clockwise group near pt 1512 as we thought they may have had a hut day yesterday which would have meant a very cramped Wakelings Hut for both groups tonight.

After a Happy Birthday greeting, track information was exchanged and we continued on to Rongotea. The weather had started to deteriorate on top, so we were very pleased to commence the trail down the spur to Wakelings Hut.

A quick dip in the river before collecting firewood, chopped firewood with blunt axe, got fire going, had dinner and spent the evening playing cards. 6 hrs 45 mins. 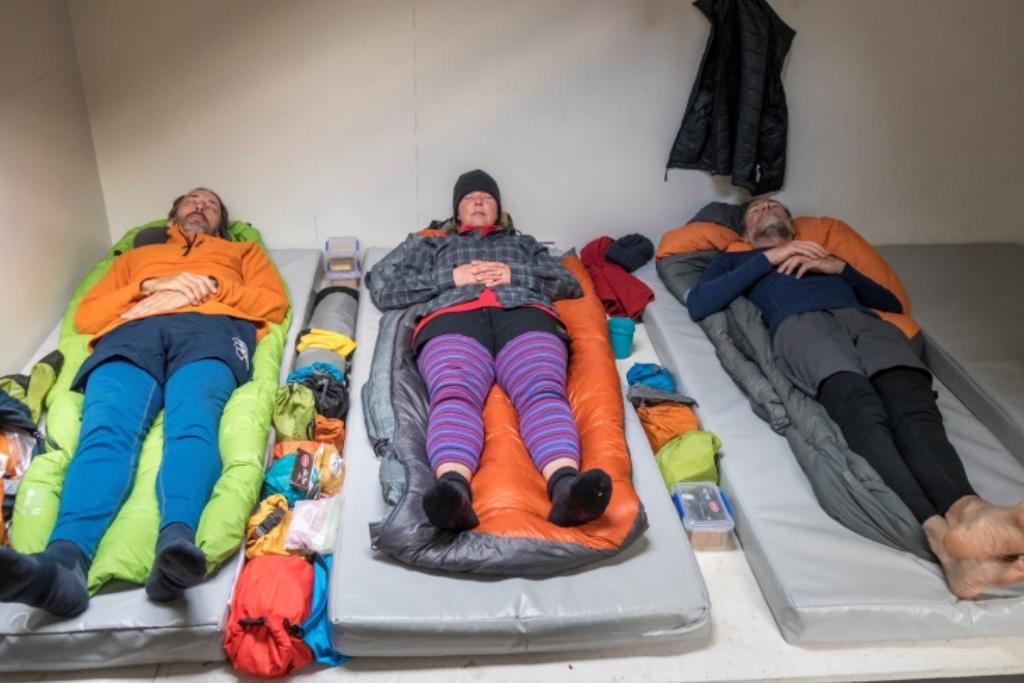 Wednesday 24 April: We climbed steeply to the ridge, headed south 3 km on a bush-covered spur to the bush-line. There was very little track remaining, requiring a lot of squeezing through thick beech trees.

Lunch was eaten at a bush camp as we reached the bush-line in sunshine.

Where the hell are we?

Above the bush-line, the mist and wind had arrived making it difficult to know when to sidle and when to stick to the ridge. After a bit of a nervous low sidle, we decided to climb back up to the ridge-line to ensure we didn’t stray off the main ridge.

We made our way over pt 1546 to the main ridge N of Te Atuaoparapara, then headed NE to Armstrong Saddle and dropped to Sunrise Hut.

Sunrise Hut is a large 16 bunk hut within easy reach from the road, making it very popular with families and youths experiencing their first taste of the outback. 8 hrs 45 mins. 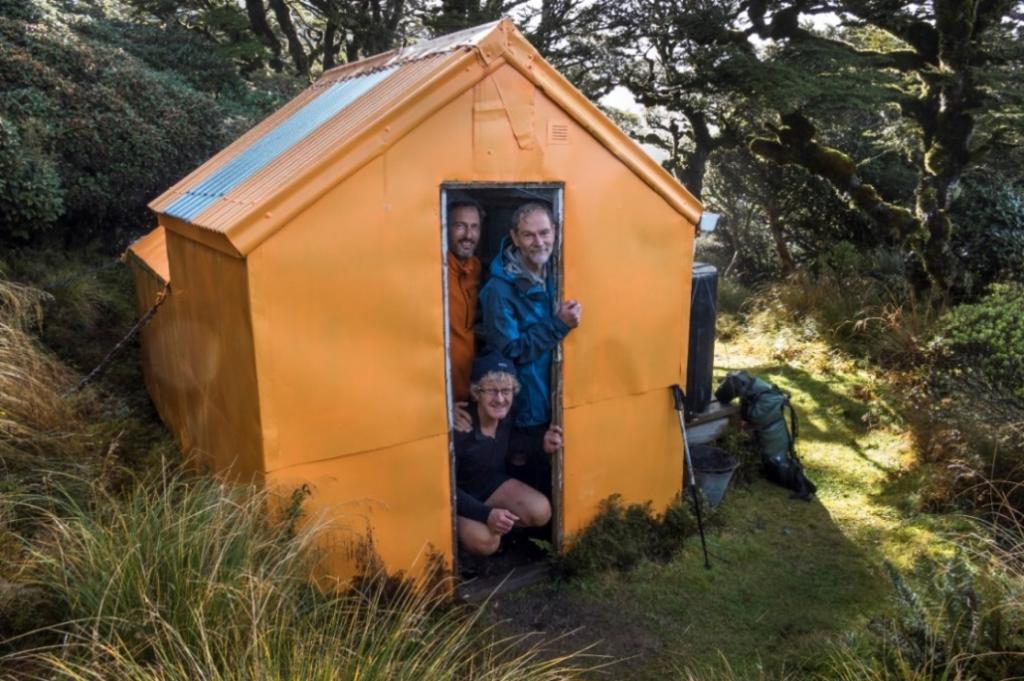 A very cosy bivvy for four

Thursday 25 April: Due to deteriorating weather and an unfavourable report from the clockwise group about their night camping on the ridge line, we decided to head for Sparrowhawk Bivvy today and Upper Makaroro Hut for the last night.

This meant only a half-day tramp today, so we played cards until 9am hoping in vain that the weather would improve. Leatherwood in saddles between pt 1476 and Maropea slowed our progress and we arrived at Sparrowhawk Biv around 3pm.

The bivvy consisted of a 2.0m x 1.8m wooden floored hut with similar sized earth floor ante-room. We were very fortunate in arriving just before a solo tramper (photographer), who ended up tenting in very windy conditions while we had a very pleasant evening playing cards in a comfortable and cosy little bivvy. 4 hrs 45 mins.

Friday 26 April: Back on the ridge again with winds blowing around 50 km/hr with gusts up to 80 km/hr and thick mist added to challenge us further. Extra layers were quickly added under our coats. Pack covers were removed and packed away so as not to get caught in wind and carry us off the mountain. Thus prepared, we set forth along narrow ridges and up over Orupu 1475.

At a large tarn just NE of Maroparea, the sun came out just in time for morning tea. Sheltered from the westerly, we watched the swirls of wind brush across the waters of the tarn.

We continued along the main ridge over Te Atua Mahuru, Ina Rock and Tupari, and down to Kylie Biv for lunch. This bivvy was the same size as Sparrowhawk but without the ante-room, and was a nice shelter for a lunch stop. One hour later, we were back on the main ridge only to find the weather had worsened rather than improved as we had hoped. On reaching the tarns just before Totara Spur, the mist lifted a little and the sun peaked through, sending the photographers running around in ecstasy trying to capture this wild and exciting day on film. 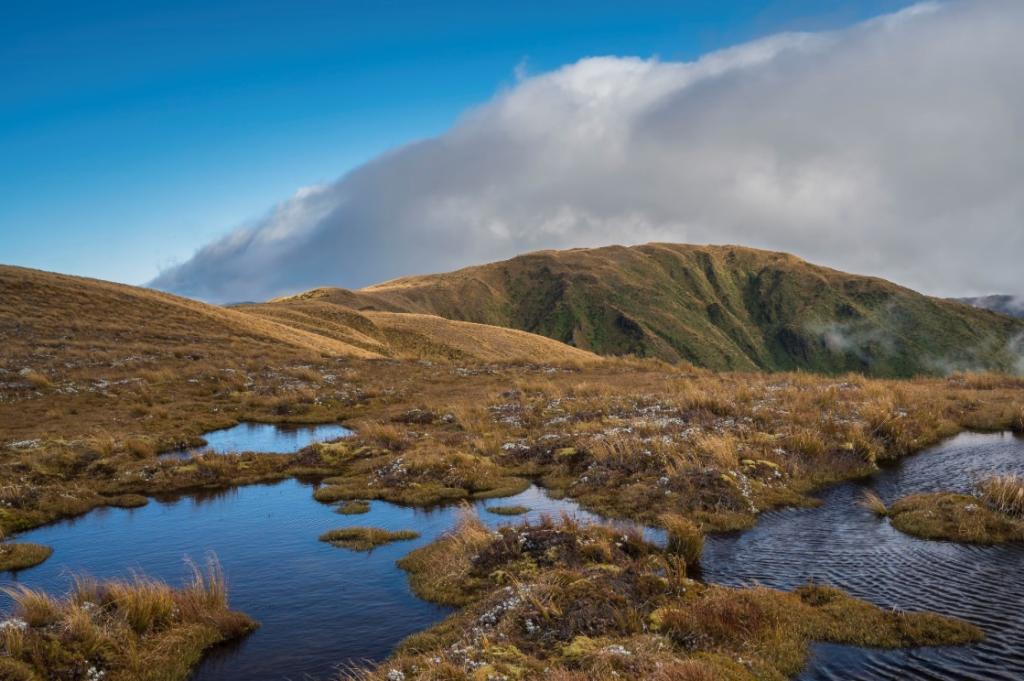 the sun finally shines through

Eventually us non-photographers decided things were getting a bit cold and so started off down the spur dragging the others behind us.

On reaching Upper Makaroro Hut, we washed in the river, got the fire going, had tea and played cards till bedtime. On filling in the hut book, we noticed the clockwise group had passed through earlier that day and so spent some time trying to figure out how and why they had changed their plans. (See their report in June Wanderlust for the answer). 8 hrs.

Saturday 27 April: We started the day by crossing the river and then had a long climb up again to Parks Peak Hut to complete our circuit, followed by a short tramp north along the ridge-line to the track intersection leading down to Sentry Box Hut.

As per the climb up, the drop back down to Sentry Box Hut was long and steep but also offered amazing views out across green farmland to the east. On reaching the hut, it was a quick wash in the stream followed by a short tramp down to the road and car. 4 hrs 45 mins.

That night was spent at the All Seasons Kiwi Holiday Park in Taupo, with a trip into town for a very nice lamb rack dinner. I followed this up with bacon and eggs for breakfast the next morning - it was what I’d been dreaming of for the last 9 days.