The occurrence of some rugby game on the Friday evening (RWC 2011 bronze playoff) meant the bus departure point was the exotic Oratia location of Murray Firth’s place - only one person omitted to notice that, but fortunately was able to join us at another pickup point en route. Ahead of us was a long 9.5 hours’ drive to the top of the Waitotara Valley in south Taranaki. Much appreciated by the group, if not the club finances, the bus was not full, although everyone quickly spread out to take advantage of the available space. Perhaps the other game that weekend (RWC Final) kept a few trampers at home to watch what ended up being a nailbiting finish … while the keen trampers on this trip missed the game on the Sunday night and instead had a relaxing early night with not a care in the world.

Anyway, on Friday night we drove through the night with short stops at Ngaruwahia, Pirongia, and Stratford, before reaching the head of the Waitotara Valley around 4.30am. Tina had the party roused at 6.00am, as the medium-fit group had a long day ahead of them, with a good part of it on a track in an unknown condition - all DOC could say was that they did not maintain it.

After a 7.15am start for the medium-fit group, the first couple of hours was easy going on a 4WD continuation of the Waitotara Valley road, alongside the Waitotara River, past the sites of farms now abandoned. An experienced member of the party managed to go off track alone, not leaving any sign of this, so caused some waiting and a few worries and plans for back tracking for an hour or two, but did eventually rejoin the party in due course, to everyone’s relief - there was still a long way to go, and any other outcome would have meant a change of plans.

After a while the 4WD highway became a straightforward tramping track still following the Waitotara River, with 2 decent swing bridges over the deep side streams that the papa country provides. More and more the river looked like a mini version of the Wanganui River, with bush clad sides and the deep brownish colour of the water. 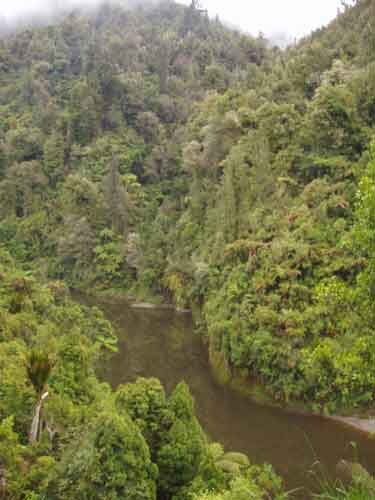 Waitotara River So then we arrived at the turnoff, a short distance before Trains Hut, where there was a solid swingbridge across the Waitotara River itself. After a quick refill of water bottles in anticipation of a long afternoon on a waterless ridge, we then climbed steeply through the bush up onto the start of the ridge between the upper Waitotara and Omaru River catchments.

Once on the ridgetop we had a welcome lunch stop, with views of bushclad hills and valleys on either side. A narrow ridgeline was then followed all afternoon - mostly quite open (because of the goats) and easy to follow the sufficient orange markers. The occasional light shower meant the usual on again / off again with coats, and the hours ticked by as we gradually acquired more altitude. The New Tahupo Hut was gratefully reached between 4 - 4.30pm.

This is a new hut on a narrow part of the ridge, with a big slip on one side not far from the hut …, minimal tent space, and just 6 bunks. Kay and Geoff managed to find a space for their tent, and the 6 other ladies in the party graciously volunteered Graeme and Tony to sleep on the floor while they occupied the bunks. A really dodgy tap on the water tank had most people not keen to use it, but eventually most people in the group managed to master the trick of how to turn it off. Enough wood for a fire, so the hut was soon more than cosy, and the blokes at floor level did not overheat .. some justice there ! Carol did not notice as she was in her sleeping bag early and fast asleep at least an hour before everyone else.

The next day, Sunday, after a solid night’s sleep, saw a more leisurely start than the day before. Carol had been reading the map on prompting from an old track sign the day before, and found some marked falls (Terereoturaukawa) on the Omaru Stream that looked like an interesting side trip. On further map reading that looked like a 5km deviation, down steeply .. and then the reverse. Meaning another 8-9 hour day to do the side trip and then get back to Trains Hut. So out of a group of 10 keen fit trampers … there were only 2 willing to do the side trip - Carol and Tony, both intent on training for their tramping events over the next few months.

So while the rest of the party assembled in due course and made their way directly back to Trains Hut to arrive early afternoon, Carol and Tony set off from the side track marker, following old track markers down a ridge - but the markers did not last long. However some great route finding by Carol meant a mostly straightforward path downwards, with only a small amount of steeper bluff negotiation required just before reaching the wide stream, where there were falls not that much further downstream. Fortunately, unlike a lot of the riverbed, there was a rocky side to this part of the stream, so after not too much scrambling, they arrived at a stopping point looking back towards the falls. Carol really turned up trumps again at this point, laying on an early lunch feast to match the occasion.

After a comfortable break they then retraced their steps - the initial steeper bits caused some anxious moments, but very soon they were back on the ridge, retrieving Tony’s pack two thirds of the way up, and then failing Navigation 101 by not immediately locating Carol’s full pack on the main track. And then a pleasantly warm and sunny afternoon following the ridgeline back along and down to Trains Hut arriving around 5 pm - another great day’s tramp, with the falls as a highlight of the weekend. 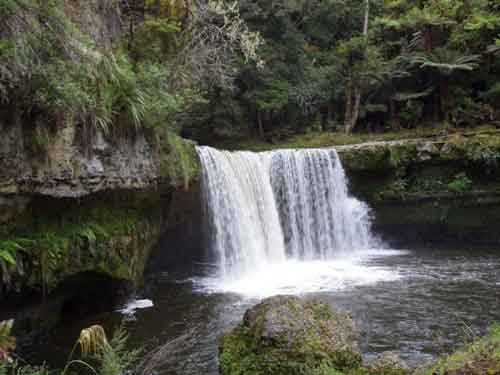 Trains Hut is a small new 6 bunk hut with a large camping area - on the Saturday night it had 15 people from various parties there, and so on a fine warm Sunday evening there were again 15, this time all ATC people, with a good proportion of those in their tents.

In the meantime, on Saturday morning the more relaxed party of 5 had reparked the bus, and then arrived at Trains Hut by mid afternoon,
Terereohaupa Falls and settled in for a cosy night after also encountering a few showers along the way. On Sunday they explored the area, including checking out the nearby Terereohaupa Falls and side tracks, and the now non existence of a swing bridge across the bottom of the Omaru Stream. This once led to a track going into a hut that DOC removed once they found it was a centre for illegal cropping activity...

On Sunday evening there was a lively debate involving Carol, Tina, Tony and others around exactly where Carol and Tony had been, and had they located the intended falls or something else, and was the new Tahupo Hut in the correct spot on the map or some distance away. The debate and doubts continue, even after checking maps and DOC details once home…. so in due course someone like me will have to visit the New Tahupo Hut again and take a number of GPS readings to see what they reveal. Whatever the outcome though, it was a really superb side trip, providing a full day’s tramp where otherwise there were not many interesting alternatives for that.

The next day our leader had us all on a tight schedule again, wanting to be back at the bus by midday, so as to start the long journey home at a reasonable time. So early wake up calls, quick breakfast, packing up of dew laden tents, with everyone on their way before 7.30. The track back out had been well trampled and rained on, so was a bit more muddy and slippery than a couple of days before, but everyone was keen to keep moving, with the last people reaching the bus by 11.30.

So Big Blue set off home before midday - an uneventful trip home, with stops at Hawera and Te Kuiti (dinner) and drop off stops in Hamilton and Takanini on the way once again to Oratia. 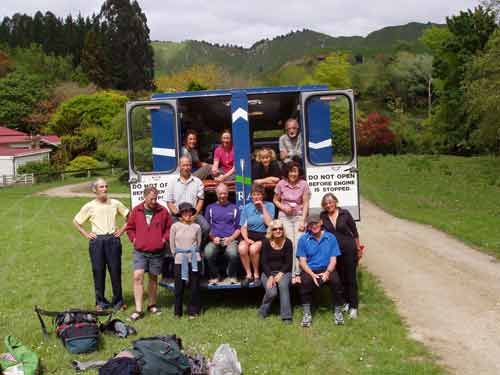 Almost ready to set off home

The full parties were