Saturday morning dawned with Ian chasing the resident roadside rooster, which had been crowing hourly from 4.00am, down SH3 in an attempt to silence it for ever. We had spent the night in Big Blue, after driving down from Auckland, arriving at the lay-by on Mt Messenger about midnight. With only 11 in the two groups it was a comfortable night, aside from the pre-dawn chorus.

After breakfast our fit group was dropped a kilometre or so south to start the Mangatuna Track, 5½hrs to Kiwi Rd, traversing the steeply forested Mt Messenger Conservation Area. Our route took us SE mostly over several steep ridges skirting Oenone Trig (351m) and then over several peaks to Huanui Trig (353m). As the day progressed we were treated to the changing face of Mt Taranaki. At the beginning, the mountain top was wreathed in cloud, but at each viewpoint it changed, until by the day’s end we had a perfect, Mt Fuji-like, cone.

The track was well marked but because of the damage to the undergrowth by goats (a group of which we surprised) we overlooked one sharply right-angled turn and headed north. Once we worked out it was the wrong way we retraced to the markers and continued on. However, Amy insisted, and kept insisting, that we were going back the way we had come. Very sensibly we decided she was right and did an about-turn back up the hill and found our turnoff. Well done, Amy! From then on our progress was less eventful. I was lucky enough to see a dozy and dazed morepork. It flew in and perched on a branch three feet above my head.

As we had lost about 40 minutes, it took us 6½ hours to Kiwi Rd and it was 2.40pm when we arrived. We now had a 5-6 kilometre road bash to the start of the Rerekapa Track and another 2½-3 hours to meet up with the easy party at their campsite on the Mangapapa Rd which links Moki and Okau Rds and is part of the historic Stratford/Taumarunui Heritage Trail.

The idea was mooted of retrieving the bus from 8 kms away in the opposite direction at the start of Moki Rd where it had been left by the other group, driving back, and parking at the start of the Rerekapa Track, then walking in as far as we could that night. That way the easy party would have the bus when they got out on Sunday instead of having to wait for us to complete the Rerekapa and Moki Tracks, and then collect them - and most of us would avoid the road bash. Craig staunchly set off to the bus while the rest of us sunbathed.

Just as we were starting to wonder what had happened to him, he returned along with a mountain biker he had met, loaded us up, and drove us to the start of Rerekapa Track. As the camping there looked poor, and the cyclist said there was a great DOC camp just around the corner, we continued on. 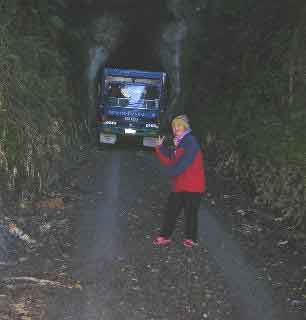 Kiwi Rd, together with Moki Rd, is narrow and unsealed and historically significant, as both were made about 1910 using wheelbarrows, picks and shovels. We now approached a hand-hewed tunnel with minimal clearance for Big Blue. Craig’s first thought was to back, back, but he ‘gave it a go’ and did a magnificent job of getting us through unscathed!

The next challenge was the road which had become very marginal and crumbling with massive drop-offs. Geoff’s main concern was that we would walk away alive and have to face the music rather than be safely dead and eulogised!
In the end we pulled over as the light faded, and camped 5 kms on from the start of Rerekapa Track, having worked out that the cyclist’s ‘great camping’ was all the way round at Mangapapa Rd with the other group. The next morning we backtracked up that road and through the tunnel and, leaving Amy and Ronald bus sitting, walked in on the Rerekapa to meet the easy group We only had day packs and had hopes of completing the circuit but Liz wasn’t ‘waring’ it .We would have been too late home. Fair enough!

After saying hello to the others we continued on for another hour to the Rerekapa Falls and the site of an old homestead and a cute shepherd’s hut complete with sunken bath and a water heater, before returning to the bus and heading for home at 1.00pm.
On the way we saw where ‘The Last Samurai’ was filmed. Fortunately, Keith balanced the bus with his weight as the rest of us rushed over to one side to look down the steep valley at the remains of the film set.

Thanks for the fun, ATC, and thanks, Craig, for your great driving (and the solo road bash).