It was a wild and windy morning when Bruce woke us up at 7 o’clock with the comment that if we wanted to get away by 7.30 (as planned) we had better get our act together. Our potential problem was daylight hours as we had been advised by a Taranaki person who had done the trip in 2006 that the track was overgrown, very much up and down, and would take eight hours plus to reach the Te Rerepahupahu Stream, then another hour to the falls themselves (our planned camping spot).

A quick breakfast, a brief discussion as to whether we should be doing this at all (the nearby stream was at least 1.5 metres in flood), then four of us headed for the Mt Damper Falls to find the track up on to the ridge that we would be following for most of the day. The Mt Damper Falls, the highest in the North Island, were magnificent - in flood and plunging down over a sheer bluff down to the valley floor way below. No time to go to the bottom of the falls so we found the indistinct track leading up to the ridge and continued on. A stiff climb through pine trees, bits of farm tracks, and eventually a stile leading into the Waitaanga Forest.

The track was good, easy to follow and well marked. As there was a DOC hut for hunters another hour and a half in, just before Mt Damper itself, we assumed that perhaps hunters had maintained this section. No time to linger as the wind was bitter so a brisk walk to the hut to be welcomed by hunters still in bed. ‘Not going out in this weather’ was their comment as Tina brewed up her coffee fix for the morning. A brief 15-minute stop and off again to tackle the ‘overgrown’ section of the track. Once again we were surprised as the track still continued to be easy to follow, well marked, and with only the occasional windfall.

Lunch huddled in the shelter of a tree was brief as everyone quickly lost body heat so, keeping up a faster pace than expected, we continued on along the undulating ridge and eventually dropped down to the Te Rerepahupau River at about 1.30 in the afternoon. The river was in full flood with the wire bridge just above the surface of the torrent underneath. The track up the river towards the falls was covered by the flooded river in places, requiring detours up little side streams to find crossing places.

The Te Rerepahupahu Falls were like floodgates on hydro dams - won’t have an electricity crisis if we could harness these. The planned tenting site at the falls was buffered by the spume from the falls and very uninviting (no sign of the other party - looks like they had done the sensible thing and gone to the hut a further hour or so on from the falls). A quick decision was made to join them - decided we still had another 300m-climb left in us. Not unexpectedly, as we climbed out of the valley we met the other party coming the other way to visit the falls after dropping their packs at the hut. The track eventually came out on top of the ridge and instead of dropping down to the next stream and up on to the high flats where the hut was, as shown on the topo maps, it headed instead up around the headwater of the stream. We reached the hut at 4.00pm and waited for the other group to return from the falls as daylight retreated.

Sunday was fine and less exciting than the stories of waist-deep flooding that the other group had experienced on the way in.
All in all, a good tramp.

Petrol price rises, car vandalism, track misinformation, and difficulties locating the start of tramps, led to Miva and me trying the ATC. We got to the truck depot early, ready for our ride towards Taranaki. With such a poor weather forecast I was worried my cell phone would go off and I would be told the trip had been cancelled. However, everyone seemed to arrive at once at about 6.30 and it was all on. My cancellation worries were groundless as everyone was keen and dauntless. We met our leaders, Chris and Noel Ashton, and all signs were positive for a good outing in the wild.

The trip down in the truck was not super comfortable; it would be almost unpleasant with twenty or so on the truck. We got to the start of the medium walk about 1.30am on Saturday, and around 7.45 in rain and gloomy conditions the brave few started off for about an 8-hour-plus tramp. The nine of us who chose the easier option headed on for about an hour to our start point. Landslides put boulders in our path, fallen trees blocked the road, and there was a flood, but we got through them all, breaking a cable while towing a tree out of the way. 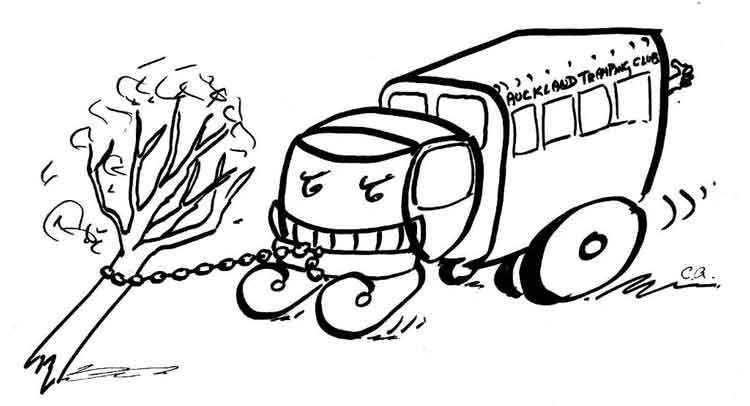 We walked in a fair amount of rain on Saturday. We passed through farmland for about 25 minutes until the farmland ended, and we came to a rain-formed lake that was at the border of the forest we were to enter. From here we walked 3 hours of flooded track. It was waist high in places. There was a precarious log bridge under water at one point, with about a 2.5 metre deep drop on the side. Miva floated her pack across and swam the crossing, which looked quite amazing. Packs float well. We dumped our packs at the little 4-bed - DOC-use only - DOC hut, and walked the extra hour to the falls. We passed the ‘medium-difficult’ party heading to the DOC hut. The falls were amazingly spectacular due to all the rain - the spume flying up from the bottom was like a rocket launch. The campsite there was ridiculously small and sad and it was not impossible to imagine being wiped out by a wave from the crashing falls while in a tent. We headed back and set up our tents on the lumpyish ground surrounding the DOC hut. The rain stopped and it was an enchanting spot.

The next day back was straightforward. We got back quite early, the sun came out and it was a beautiful drive back, reaching Auckland at 6:30pm.

We had a great time away. The thing I marked most was how good all the people in the ATC were to be with. Good people to be in tune with the wilds with.