Saturday. An early-ish start on a cool but clear morning had us leaving the Matemateaonga Track a short distance from the start at Kohi Saddle, heading southwest towards The Letterboxes. Just before we got there (actually the feature could perhaps be renamed The Vaguely Rectangular Hole in the Bank) the first grassy clearing with Pine trees opened up, reminding us of those who’d tried to make a go of farming in what seems to be wilderness.

The next section of track heads south then west towards Charlie’s Clearing. Margaret had heard talk of slow going and windfalls but, though there was the odd windfall, what we got was a nicely benched track still in pretty good condition. 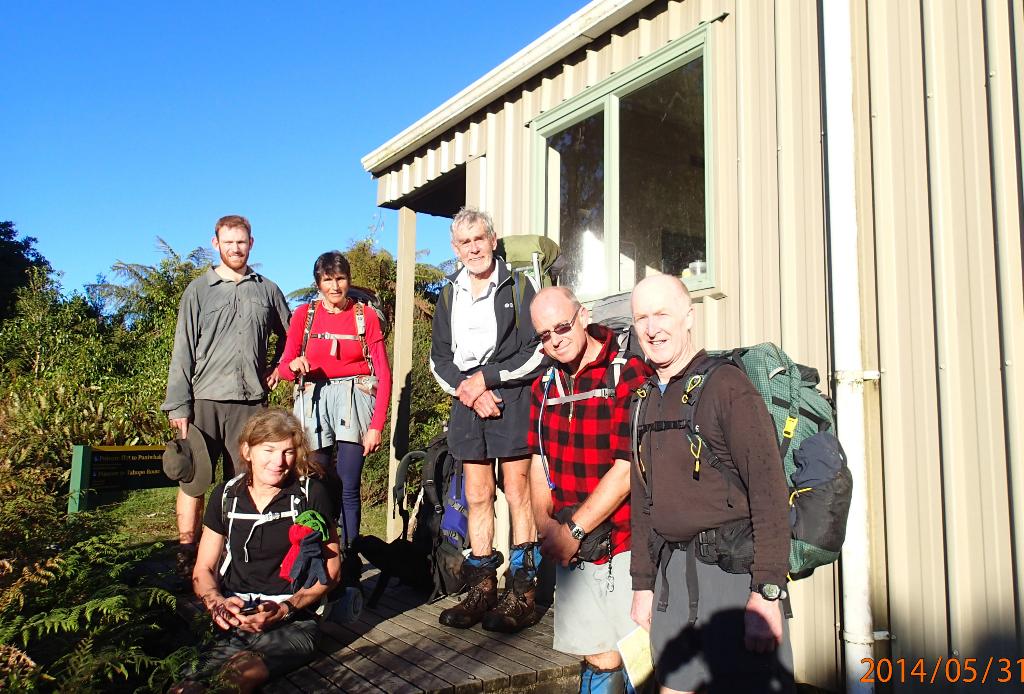 After lunch, and a wee bit of casting-about to find the correct route out of Charlie’s Clearing, we were off on the last leg to Puteore Hut. This section of track is also pretty good, and reasonably marked for the most part, so we made the hut with plenty of day left.

This is a really nice day’s walk at a touch over 20kms and 7.5 hours (info courtesy of Cam’s GPS watch), often along primary forest ridges in good condition with a nice comfortable 6-bunker (with stove) at the end of it. The hut sits snugly on the ridge with views both north and south. Camping is limited but there’s room for a couple of tents. An amazing night sky, miles from any light pollution, allowed a couple of us a short lesson on star systems and Magellanic Clouds - thanks Lee! 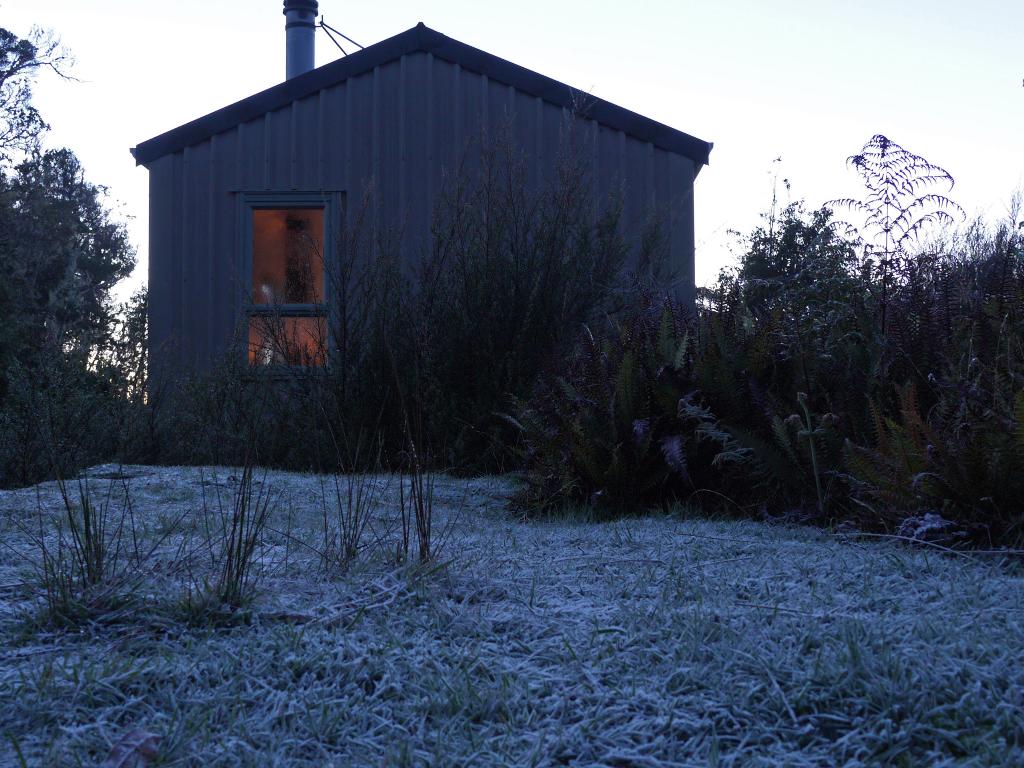 Sunday. A bit less cruisy - our route from Puteore Hut to Humphries Clearing on the Matemateaonga Track was only 9kms long but took the same 7.5 hours. Dropping east then northeast down a spur off Puteore Peak to cross Omaru Stream at its confluence with Pouri Stream, the route then climbs and follows a small ridge connecting spot heights 642 & 703 before dropping down to the Matemateaonga track roughly midway between Pouri Hut and the Mt Humphries turn-off.

Slow going - maybe. Awesome tramping - definitely! Admittedly the weather was spot on, but this is great country. The forest is wonderful and, as with the day before, in good health - presumably due to local pest control efforts. We learnt a bit too, with a helpful explanation that what Lee and I thought might be some sort of weird Horopito (Pseudowintera colorata), was in fact its cousin, P. axillaris - thanks Malcolm!

Of course, an awesome tramping experience does require the ability to find one’s way. This route hasn’t been cut for a long time. In some places the Permolat rectangles/orange triangles were sparse-to-non existent, and the ridge-line indistinct - it made for good bush navigation practice. Progress was aided by Cameron and Sue doing a great job spotting the way forward up front whilst keeping up a decent pace, Margaret knowing where we were going (as a good leader should!), having 7 of us to fan out when we needed to, and having Lee as our navigational back-stop, checking off way-points as we went. By the time we hit the Matemateaonga Track there was plenty of admiration for Tony Walton’s effort, having bashed his way through solo the year before. 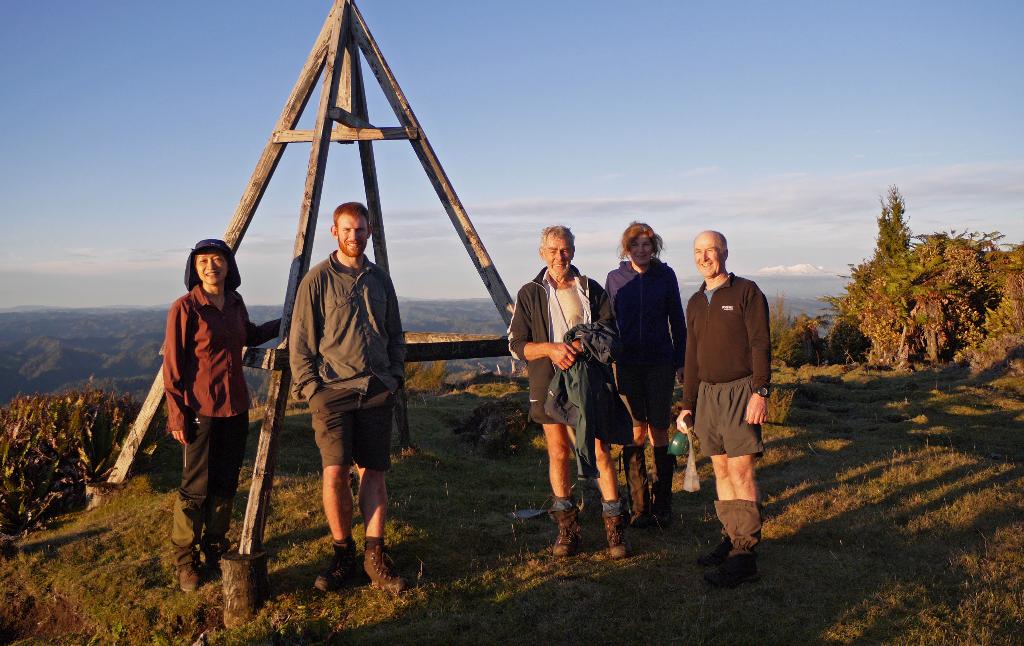 Once on the Matemateonga track, we swapped Plan A (heading east for a night in Pouri Hut) with a night camping at Humphries Clearing (site of the now-removed Humphries Hut), 20 mins to the west, back towards Kohi Saddle. This proved a good move as it allowed a late afternoon walk up Mt Humphries so we got marvellous views east (Ruapehu etc) and west (Taranaki/Pouakai Range) in great light.

Monday. The day again dawned fine and the views through to the east were again impressive heading towards Omaru Hut and Kohi Saddle. We’d not been going long, though, before Sue had the bad luck to slip on a tricky bit of track, breaking a leg. I’d hope to show some of her stoicism if it happened to me. The situation was well managed by Margaret, with Lee’s able assistance, and PLB and Mountain Radio showed their worth. Sue was winched away by helicopter within a few hours. The rest of us made our way out to the bus, Fay having gone ahead earlier to alert Athol’s group to the situation.

This route made for a fine 3-day tramp - Sue’s misfortune aside - in a sometimes forgotten part of the country. Thanks to those who organised a complex weekend involving 2 buses and 5 trips, thanks also to the drivers.