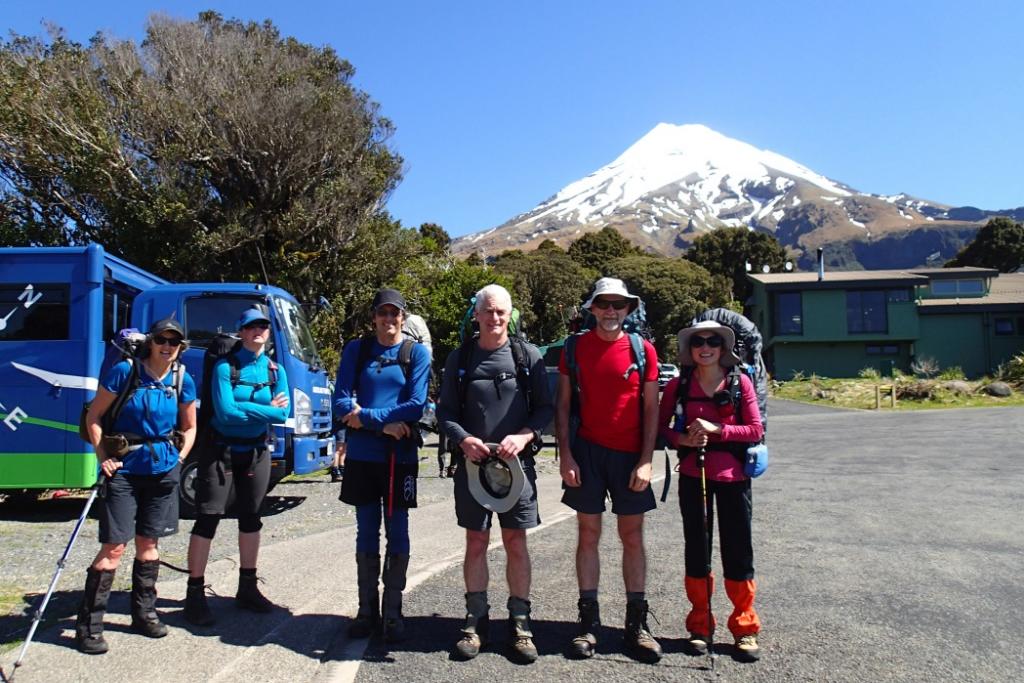 After a reasonably pleasant bus trip, we arrived at the North Egmont visitor centre at around 3pm. DOC had advised me earlier in the week that crampons and ice axes might be required, so I had arranged for the club’s alpine gear to be brought down on the bus. As we were not expecting to have to use this gear, we decided to double-check with DOC at the visitor centre prior to committing to carrying this somewhat awkward equipment. DOC had no recent reports of anyone tramping the high route and so recommended we take the gear just in case it was needed. They also advised against the low route between Waiaua Gorge Hut and Lake Dive Hut as it was no longer being maintained and was in a very bad condition with a lot of tree fall. 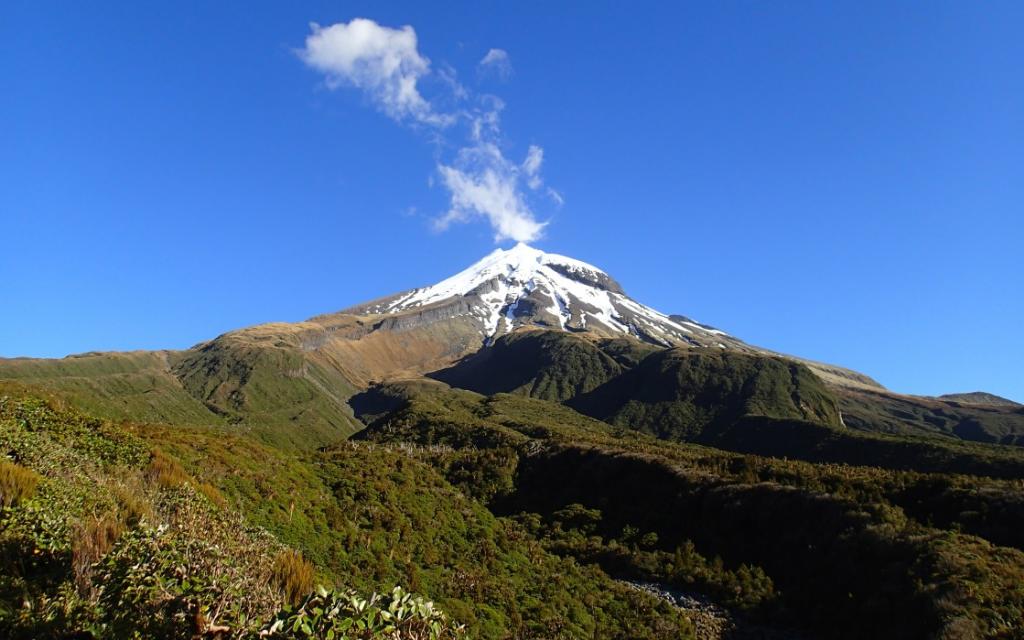 So, with only a slight protest, it was decided that the ice axes and crampons were to be carried. I had decided that the Puffer wasn’t for us despite the trip description and instead led the group up the Razorback via Holly Hut Track. It was a beautiful afternoon with clear blue skies over the mountain. After a very pleasant tramp, we arrived at Holly Hut still bathed by the late afternoon sunshine. After watching the sun go down from a nearby ridge and the mist rise to encircle us, we all retreated to the hut for dinner and bed after a very enjoyable first day.

We departed the hut at 7: 30am into a rather misty morning and proceeded down the track to the turn-off to Bells Falls. Fay and Simon went to have a quick look at the falls while the rest of us waited at the intersection. We continued downstream to Stoney River which is a very wide and rocky scar down the side of the mountain due to a past eruption. Back in the bush and after crossing a number of small streams, we arrived at Puniho Track. This is a very fine track leading up a ridge line to Kahui Hut, where we stopped for lunch. The day had remained quite cloudy and, by the time we left, a cold breeze had sprung up. We arrived at Waiaua Gorge Hut at around 3pm and promptly got the fire going to warm the place up and dry our boots and socks. As the afternoon progressed, a young Australian couple, and later a young German girl, arrived and were to follow us to Waingongoro Hut the next day.

We departed the hut at 7am. Today we would discover if we were going to make it around the mountain or be forced back due to ice and snow, high winds or poor visibility. We had adjusted our crampons the night before, so were prepared for anything. We dropped down into the gorge, 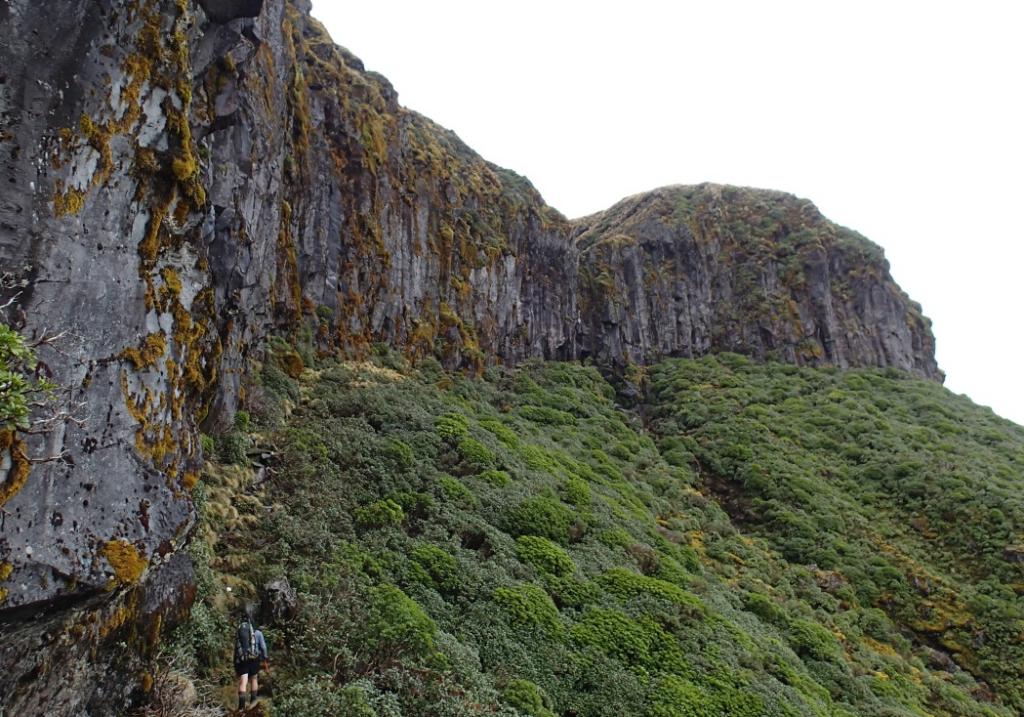 crossed the river at the bottom and began our climb up Brames Falls Route to the base of some high rock cliffs below Bob’s Ridge. The last time I did this circuit, I recall scrabbling over this large boulder at the base of this cliff with the risk of sliding off and down into the valley below. The bush has now been cut back below this boulder, allowing you to pass below and making it much safer. At this level, we were quite exposed to the cold wind that had come up; fortunately it was from behind and as we travelled further around the mountain it eased off.

After encountering only a few patches of ice, not requiring crampons, we arrived at the Upper Lake Dive Hut Track intersection where we stopped for lunch. From here, it was a gentle climb around to Fantham’s Peak Track, followed by 101 steps down to Dawson Falls, passing through the wonderful goblin forest. Arriving at Dawson Falls at 2pm in beautiful sunshine, we all agreed we could not go past the garden bar without refreshments. At this point, Catherine realized she had lost her raincoat which was of great concern to me as bad weather was forecast for the next day. Fortunately, on reporting this loss to the visitor centre, she was advised that the young German girl we had met at Waiaua Gorge Hut had found it and would deliver the raincoat to Catherine at that night’s hut. We arrived at Waingongoro Hut at 4pm with the sun still shining on the large porch, making for a very fine ending to a very pleasant day’s tramp. 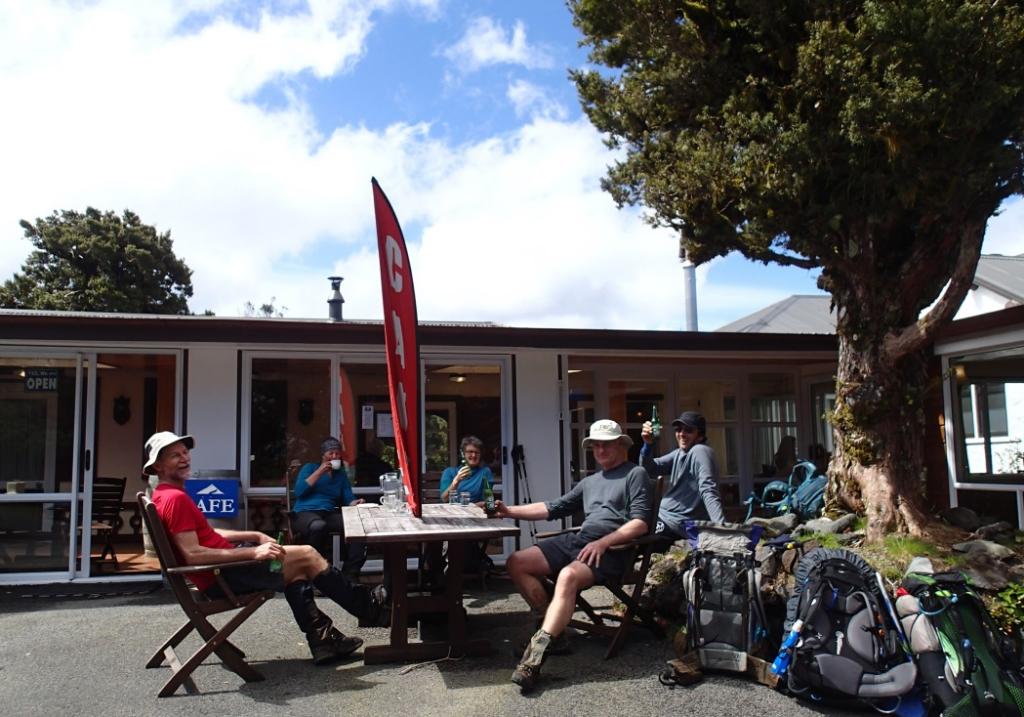 We departed the hut at 7: 15am in fine weather but expected heavy rain from the forecast received from Dawson Falls. Starting with a climb back up 300m to the high level circuit route quickly got us warmed up. Then it was a steady climb around the mountain Manganui cableway where the first drops of rain began to fall. At Manganui Lodge, the raincoats and over-trousers went on as the wind came up and the temperature plummeted. The tramp around to Tahurangi Lodge was wet and windy on the exposed sections; the Lodge was closed but provided shelter and seating for morning tea. It was then down the puffer and around the summit track to the North Egmont Visitor Centre, a change into dry clothes and some welcomed refreshments at the café.