The bus arrived in low cloud at Dawson Falls early Saturday morning with 15 keen trampers. The Fit 5 being keenest were off by 7.30 while the medium group of 8 discussed the day’s plans. 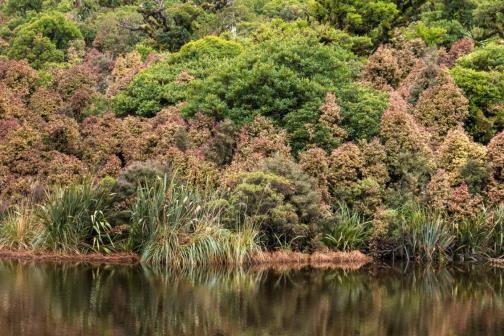 Due to recent snowfalls an avalanche warning was on a section of the scheduled route. With fresh legs and good spirit we decided to see "how bad could it be" by climbing the Fanthams Peak track.

Arriving at the Hooker Shelter for a break with only a few patches of snow, we decided to climb on, past the Kapuni Lodge turn off now into consistent and gradually deeper snow. Shortly after we decided to turn back, to take the Lower Lake Dive track. 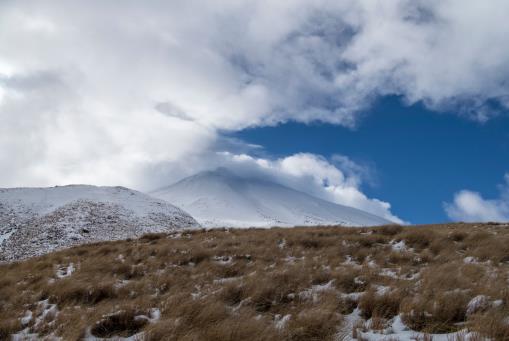 The track junction was passed after this 3 hour pleasant morning climb, finding the track had recently been cut back. There was a number of unbridged river crossings which were a concern but were easily crossed.

By 3 pm with the rain approaching the weary group arrived at Lake Dive hut, to find the fit 5 had warmed the hut with the fire, claimed their bunks and set off to the snow line. On their return both groups settled in for the night thankful for the fire as the temperature dropped.

Waking to a wet windy Sunday we layered up for the return tramp along Lower Lake Dive Track to Dawson Falls. The day gradually improved with layers coming off and the sun showing itself. We were back at the falls for lunch and coffee at the cafe. 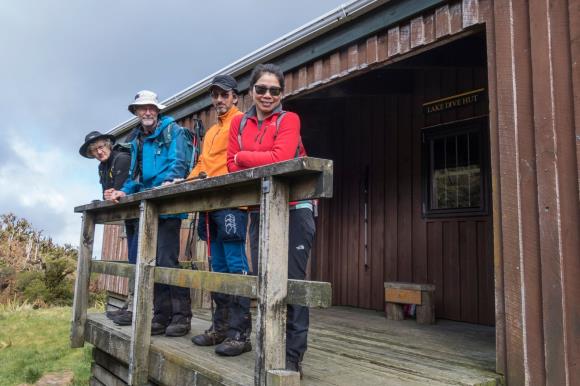 This trip was billed as a “Winter Wonderland” experience, and the mountain gods obliged with heavy snowfall in the days preceding the trip. It was too much of a good thing in the end, prompting the Avalanche Advisory to issue a grade 3 ‘Considerable’ avalanche risk for much of the eastern part of the mountain.

Our planned route up Fanthams Peak Track to the upper Lake Dive track was in the danger zone, so rather than risking an avalanche, the trip leader prudently decided to take the lower Lake Dive track.

After Friday night in the bus at Dawson’s Falls, we set off along the lower Lake Dive track at 7:30 am under a low grey sky.

An easy walk through beech forest brought us to Lake Dive Hut shortly after 10:00 am, where we considered continuing on to our planned destination of Waiaua Gorge Hut. 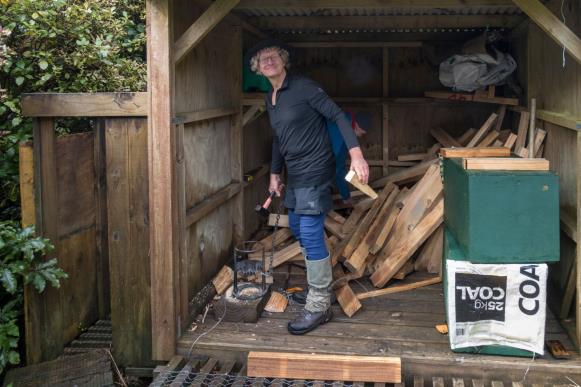 The options of the Taungatara or upper Lake Dive tracks both took another 7 hours, achievable on the day, but it would have meant a late return to the bus on the following day, with a long drive back to Auckland still to come. It was therefore decided to remain at Lake Dive Hut overnight, and return the same way on the following morning.

We set about splitting wood for a fire, selecting bunks, making tea, and had lunch, all before midday. With nothing much left to do after that, longing glances were cast at the sleeping bags lined up on the bunks – a siesta was calling after a sleepless night in the bus!

Fortunately, we were saved from further indolence by a break in the weather, as the clouds parted to reveal Mt Taranaki in all its snowy glory.

With the promise of good mountain views, we hastened up the track to the high-level path, which at that point was just above the snow line. After enjoying the different vistas both up and down the mountain, we followed the high-level track anti-clockwise for a short distance round the mountain. 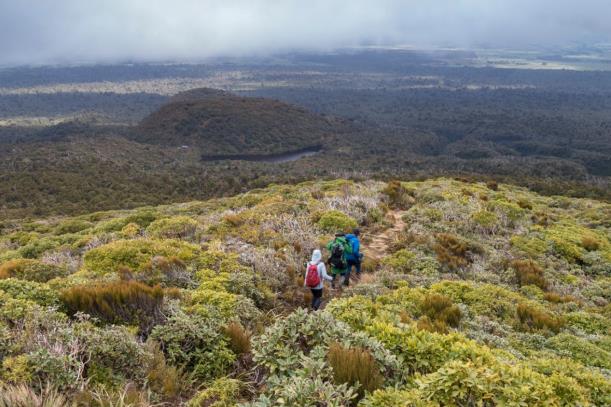 Progress was slow on the snow-covered tussock, and we were happy that we hadn’t carried on to Waiaua Gorge Hut. By that stage, the fine break was disintegrating as the gale strengthened and ragged clouds raced by.

We quickly descended to the shelter of the forest, and reached the hut just in time to avoid the rain. Meanwhile, the Medium group had also arrived at the hut,
and the evening was spent swapping yarns around the fire, and playing cards. 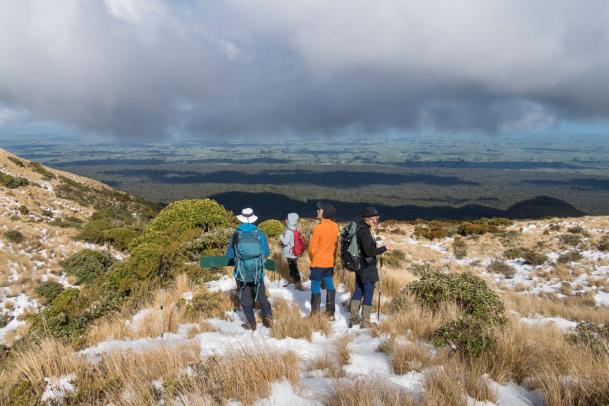 The wind was still gusty the next morning, with occasional flurries of rain. Both Medium and Fit groups set off together at 8:30 along the lower Lake Dive track, reaching Dawson Falls after about 2½ hours. 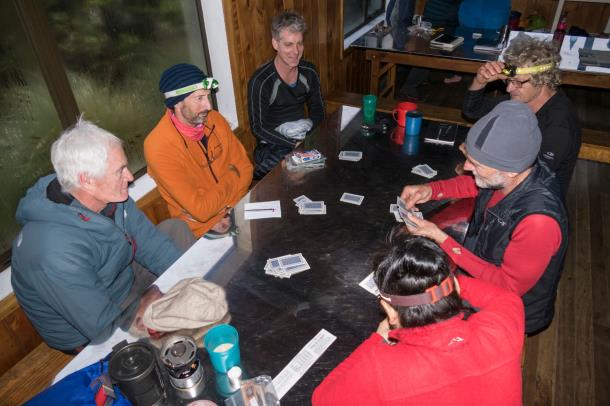