Saturday 21/2 Departing Auckland around 7.30am, we reached the Holdsworth road end after a couple of café stops around 5.00pm. We were up at Powell Hut by 7.30pm, the rest of us wondering if David was planning to keep up his fearsome pace right through the coming week.

Sunday 22/2 Deciding to reverse the advertised trip direction to take advantage of favourable weather, we headed north up the Holdsworth-Girdlestone Range and were able to greet Graeme, Alex, Willie and Rob just shy of Jumbo as they made their way in the opposite direction. The scene was set for the week weather-wise, with favourable conditions (not too much wind, mildish temperatures and patchy visibility). The Broken Axe Pinnacles are these days a straight-forward proposition with a poled eastern sidle of the trickiest ( most northern) pinnacle. By the time we reached Girdlestone, and Tarn Ridge Hut shortly thereafter, the clag had cleared for a bit and we were treated to views in all directions (Arete, Bannister and Twins, Lancaster, Crawford etc). Around 11 hours for the day (including breaks - which, as with the rest of the week, were fairly regular). 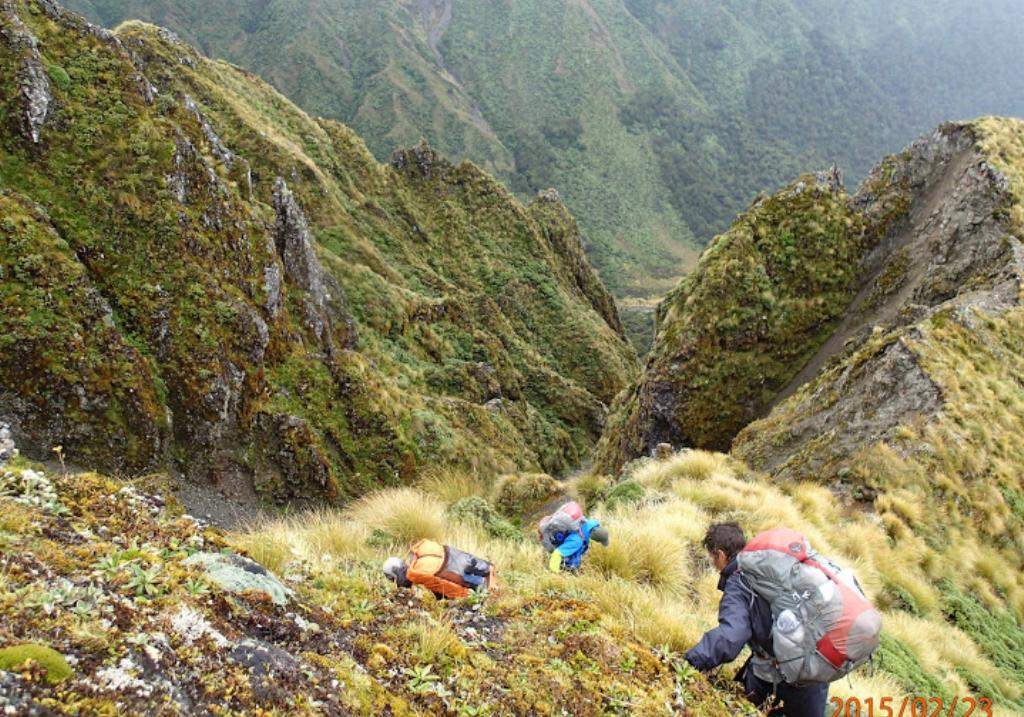 Monday 23/2 Off to Carkeek Hut today via the tops. Poor visibility until Thompson meant paying attention to where we were going along Tarn Ridge and over the Waiohine Pinnacles, where Margaret and Fay were talked out of a proposed side trip down to Arete Forks. On leaving the Northern Crossing route at Lancaster, we found its west face steepish (as advertised) but Carkeek Ridge to be very nice going generally. The hut sits in a clearing just inside the bush-line and is a well-loved classic NZFS S70 six-bunker, nicely maintained by the volunteers of ‘ExNZFS’. Around 7 hours.

Tuesday 24/2 The route down to Park Forks has had a bit of work (fresh permolat etc), presumably from the aforementioned volunteers (thanks guys!), and took us a couple of hours. The route from Park Forks up to Nichols took a wee bit more finding, the correct spur eventually identified due to great teamwork after a bit of head-scratching - Margaret’s tutorial on identifying blazes sure came in handy! Around 3 hours from Park Forks up to Nichol’s Hut, where we had lunch. We decided to push on in the afternoon, over Crawford, to Anderson’s Memorial Hut, another 2.5 hours or so. 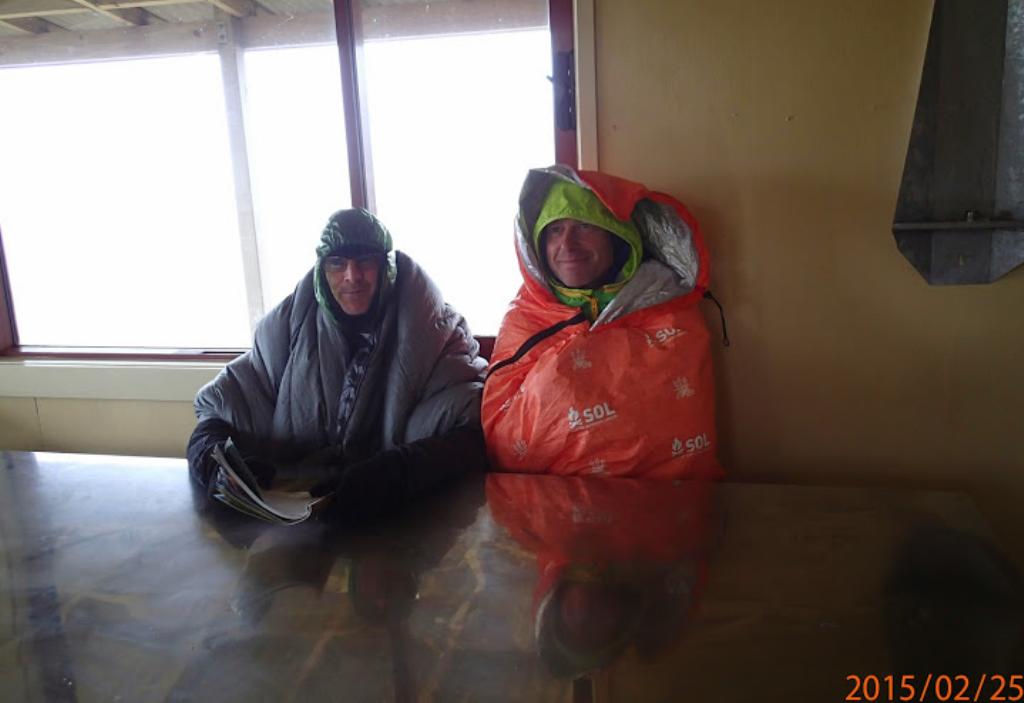 Summer trampinmg in the Tararuas at its best !

Wednesday 25/2 Our only day of unpleasant conditions (fairly high winds, poor visibility and coolish temperatures - see picture), it was a case of head down, tail up, down the Southern Main Range. Aokaparangi was reached in 2.5 hours, Maungahuka Hut another 2.5 after that. The waves on Maungahuka Tarn had Dave (briefly) considering spending the afternoon using his Thermarest for a spot of body surfing.

Thursday 26/2 Another short day down the Main Range, to Kime Hut (4-5 hours). Weather conditions had improved and so had the infrastructure since my last visit. Chains installed above and below the ladder traversing the Tararua Peaks make it less daunting, and there are poles on McIntosh showing the route down Pakihore Ridge. The new Kime Hut is fantastic - light, spacious and warm and is now a well-worthy destination in its own right (not something said by many of its predecessor, ‘the ice box’) 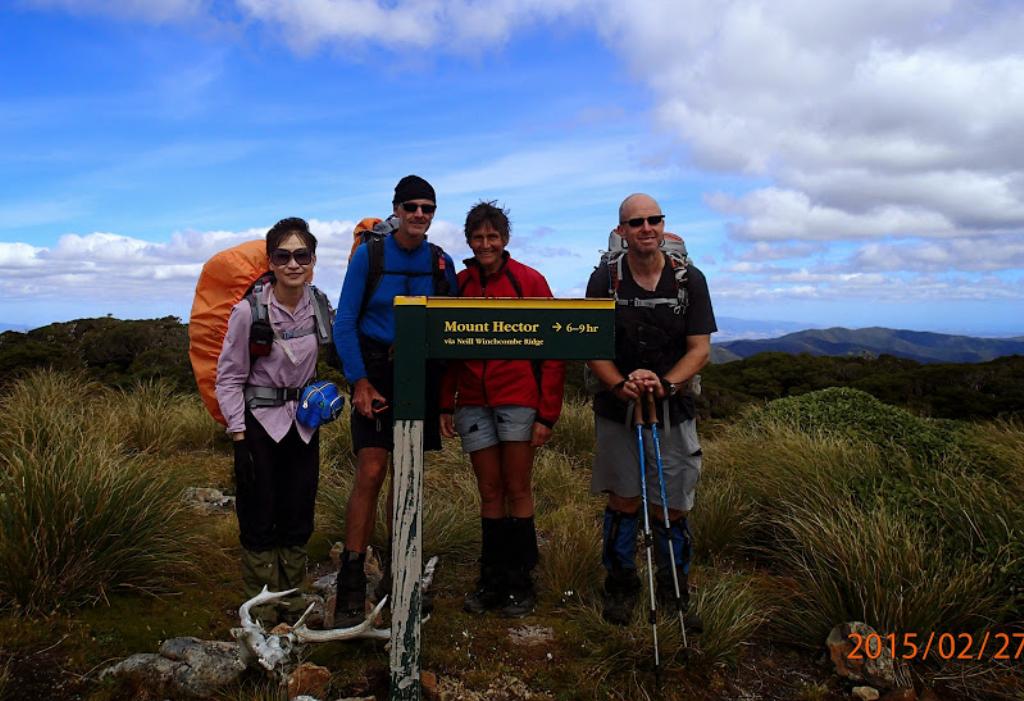 Friday 27/2 We found ourselves on Hector (half an hour east along the Southern Crossing from Kime) by 8.00am and were again treated to fabulous views. Travel down the Neill-Winchcombe ridge was straight-forward and pleasant, but slowish after Winchcombe Peak. Cone was reached after 5 or 6 hours, and the historic Cone Hut a couple of hours after that. It proved a nice place to spend the evening

Saturday 28/2 A decent 10+ hour day completed our week-long circuit back to Powell Hut on Mt Holdsworth. Lunch was at Totara Flats Hut, 4 hours walk from Cone Hut. The afternoon was spent travelling up High Ridge, the route well-padded and disced up to Flaxy Knob but a bit uncertain for a time after that where the ridge widens and changes direction to the east. High Ridge is very pleasant tramping but the leader was happy, thanks again to good team route-finding, to have made it out of the bush and on to the open upper flanks of Holdsworth with ample time to wander down to the hut in daylight, so avoiding the well-publicised recent issues faced by Police Dog Thames in the same area

Sunday 1/3 An early breakfast and quick march down the hill saw us get back to Auckland not too late having had, all in all, a great week on the Tararua tops. We were David Holl, Margaret Law, Andrew Murdoch (scribe, leader) and Fay Zhong (photographer).